Read CivilWarLand in Bad Decline: Stories and a Novella Online

CivilWarLand in Bad Decline: Stories and a Novella 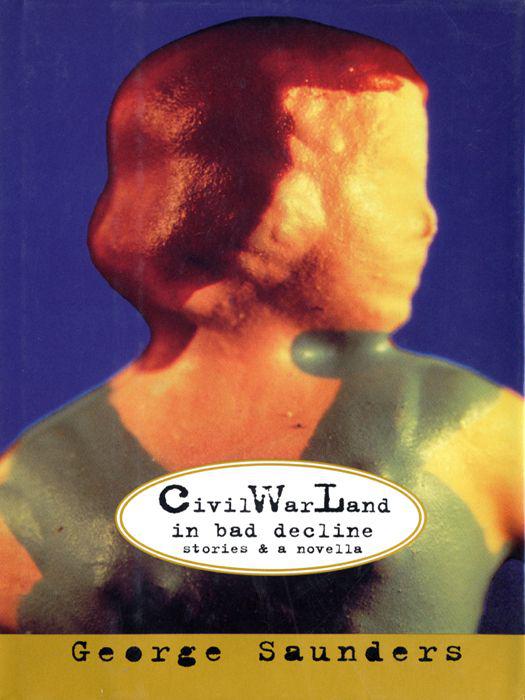 CivilWarLand in Bad Decline
is a work of fiction. Names, characters, places, and incidents are the products of the author’s imagination or are used fictitiously. Any resemblance to actual events, locales, or persons, living or dead, is entirely coincidental.)

Originally published in hardcover and in different form in the United States by Random House, an imprint of The Random House Publishing Group, a division of Random House, Inc., in 1996.

A Lack of Order in the Floating Object Room

George Saunders doesn’t need an introduction. He’s not a dead guy whose work was and remains difficult to read. He’s not toiling away in obscurity or translated from the Chamicuro. He’s the future of American short fiction and has been for about fifteen years. He publishes in
The New Yorker
like Cheever and Updike used to publish in
The New Yorker.
He has won a MacArthur grant and a Guggenheim fellowship, four National Magazine Awards, and even something called the World Fantasy Award. I bet Cheever and Updike never won the World Fantasy Award. The man himself has appeared on
The Colbert Report
and the
Late Show with David Letterman.
He’s practically a celebrity, and you don’t find many of those in the literary world these days.

Nevertheless, on May 24, 2012, at 3:07
P.M.
, I received an email from an editor at Random House that read, in part, “We’re publishing an ebook of
CivilWarLand in Bad Decline
in November (it exists only in paperback now)… [and] I wanted to ask if you would consider writing a short intro to it.” I happened to be online when the email came in, and without giving too much consideration to what I might say, or to the compositional challenges inherent even in a short introduction, I replied seven minutes later, at 3:14
P.M.
, unequivocally: “Done. Give me the due date. Totally psyched.”

And I was totally psyched, continue to be totally psyched, even as now, sitting down to write, I realize that Saunders needs no introduction, and yet I’m responsible for writing an introduction. Whatever I do or do not say about him will be secondary and beside the point, especially confined as it must be to one modest introduction and to only one of Saunders’s collections,
CivilWarLand in Bad Decline,
his first, published in 1996 and never out of print, still as fresh now as then, still as wholly original and startling and unsettling as it was then, when I was working as a clerk in a bookstore, broke, miserable, and desperate, and picked it up and couldn’t put it down again. And I sort of knew this when the Random House email came in, at 3:07
P.M.
, with me online and capable of responding at 3:09 or even 3:08, or even in the same minute as the email was sent. In the back of my mind, I knew that Saunders needed no introduction and that the collection, seven pieces in all—six stories and one novella—also needed no introduction, no clarification or commentary, because it remains as perfectly capable of conveying everything that’s necessary in and of itself. I knew in the back of my mind that enthusiasm is never sufficient reason to agree to write anything—that the greater my enthusiasm, in fact, the more vital it is for me to demur, because all that needs to be said has already been said by the work about which I feel enthusiastic. The work that stirs the greatest passion is also the work that creates around it the greatest silence, the strongest imperative to stand back and admire and let others admire, without interfering. I knew that an introduction would not allow me to adequately flesh out the many thoughts I’ve had about Saunders and his work since I read him as a clerk in a bookstore. It might not even allow me to flesh out what is, in this one collection, both immediately winning—the humor, the heart—and what remains more obscure and subterranean, like the layers of irony he uses in the title story alone, one centered around a history-themed theme park where one “good” war (the Civil War) is ultimately destroyed by one of our “bad” wars (Vietnam).

But at the same time I was debating the difficulties, I also thought that it would be easy to talk about how the premise of any one of Saunders’s stories looks and feels a lot like one of Edgar Allen Poe’s, as it’s almost always a highly imagined premise, a premise limitless in its outrageous gothic possibilities, and yet somehow Saunders tethers the premise and makes of it something deeply affecting in a way that Poe never did, in a way more easily achieved with straightforward realism, as Melville did in “Bartleby, the Scrivener”—in other words, to position Saunders as the natural heir to both Poe and Melville. And because he uses the American vernacular with more ingenuity than anyone else—because he’s also like Whitman, who wrote, “I harbor for good or bad, I permit to speak at every hazard, / Nature without check with original energy”—because his stories speak with Whitman’s original unchecked energy, I thought, in the seven minutes it took me to respond to Random House’s email, debating whether or not I had anything to say about George Saunders that might go beyond hagiography, I could talk about how Saunders, in moral interrogation and clarity of voice, is as close to the nineteenth century as he is to the twenty-first, which is a little surprising when you read him, because he’s so absolutely contemporary. He is an entirely autonomous product of his own devising, aided by this new era in our berserk republic. At the same time, I thought, I could rectify the all-too-common mistake critics make when talking about Saunders, which is to call him a satirist in the early style of Mark Twain: while Saunders does satirize, or, in other words, render the real absurd, he also carefully and lovingly and artfully renders the absurd real, which is a much harder trick to pull off and, once done, moves the so-called satirist out of the pigeonhole and into the open air of the first-rate artist. But I also thought that all that sounded academic, and that Random House probably wasn’t really interested in what some guy had to say about George Saunders’s nineteenth-century roots and his divergences therein—and that I wasn’t really interested in talking about all that, because it wasn’t what made talking about George Saunders such an imperative. As I debated whether or not I could say anything about George Saunders, I thought that ultimately what I could do, if it came time to write and I found myself really stymied, was just do what’s kind of expected in introductions, which is to talk about what makes the book great and why I love it. Just talk about why you love it, I thought as I debated, despite knowing that talking about something I love is a recipe for disaster, as well as knowing that I would of course say yes to Random House. It took me seven minutes to respond to an email I could have answered in thirty seconds, or even ten seconds, after receiving it, knowing that I would seize any opportunity to talk about George Saunders—seven minutes because I knew how hard it would be to talk about him.

Part of the reason it’s so hard to talk about him is the shared acknowledgment among writers that Saunders is somehow a little more than just a writer. Of course he’s only a writer, only predominately a short-story writer, and even though he established a new template for the short story in
CivilWarLand in Bad Decline,
a template as influential as Raymond Carver’s was to his generation, and even Hemingway’s to his, hopelessly parodied by younger writers but belonging to Saunders alone—even though all this is big news, Saunders is still just putting one sentence in front of the other in the service of the humble short story. Sometimes those sentences revel in the purely comedic, as does this passage from the collection’s sixth story, “Downtrodden Mary’s Failed Campaign of Terror”:

A young girl gets extremely worked up on the honeymoon and the next thing she knows her new husband is scampering into the kitchen for a zucchini squash. Even through my crying he insisted, saying it would bring us closer together. Imagine the humiliation of being just eighteen and having to go to your family doctor with an infection difficult to explain. Finally he found it in a plant book.

And sometimes Saunders’s sentences create a new world and toss you right into it. That’s when they crackle with a dizzying inaugural energy. Here’s a classic example from “The 400-Pound CEO”:

At noon another load of raccoons comes in and Claude takes them out back of the office and executes them with a tire iron. Then he checks for vitals, wearing protective gloves. Then he drags the cage across 209 and initiates burial by dumping the raccoons into the pit that’s our little corporate secret. After burial comes prayer, a personal touch that never fails to irritate Tim, our ruthless CEO. Before founding Humane Raccoon Alternatives, Tim purposely backed his car over a frat boy and got ten-to-twelve for manslaughter.

And sometimes the sentences, while funny, are tinged with a melancholy in a fashion that has come to be a trademark of Saunders, who has a genius for wringing laughter from the tragic. In “The Wavemaker Falters,” the unnamed narrator has accidentally killed a “sweet kid” named Clyde, who now haunts him at night:

Even though he’s dead, he’s still basically a kid. When he tries to be scary he gets it all wrong. He can’t moan for beans. He’s scariest when he does real kid things, like picking his nose and wiping it on the side of his sneaker.

He tries to be polite but he’s pretty mad about the future I denied him. Tonight’s subject is what the Mexico City trip with the perky red-haired tramp would have been like.

And sometimes, when Saunders is really on fire, he imagines the afterlife. Take the collection’s title story, his first unequivocally great story. The unnamed narrator, complicit in killing a kid and burying his hand to cover up the crime, is being stabbed to death by the vigilante he’s hired to keep CivilWarLand safe from roving gangs:

Possessing perfect knowledge I hover above him as he hacks me to bits. I see his rough childhood. I see his mother doing something horrid to him with a broomstick. I see the hate in his heart and the people he has yet to kill before pneumonia gets him at eighty-three. I see the dead kid’s mom unable to sleep, pounding her fists against her face in grief at the moment I was burying her son’s hand. I see the pain I’ve caused. I see the man I could have been, and the man I was, and then everything is bright and new and keen with love and I sweep through Sam’s body, trying to change him, trying so hard, and feeling only hate and hate, solid as stone.

Here Saunders imagines for us what it’s like to die: “Possessing perfect knowledge.… [E]verything is bright and new and keen with love …” But the narrator doesn’t focus solely on his own death and all his terrible regrets. With an unusually expansive heart, with a uniquely inspired imagination, Saunders allows his narrator to inhabit the mind of his own assailant. Even as he’s being killed, Saunders endows him with an almost irrational empathy, and this empathy is the source of all humanity.