Read Claim Me: A Novel Online

Claim Me: A Novel 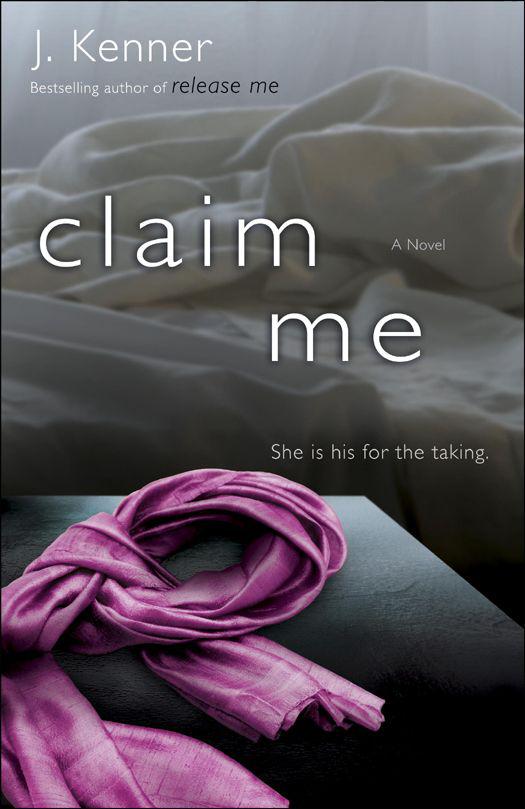 Claim Me
is a work of fiction. Names, characters, places, and incidents either are the product of the author’s imagination or are used fictitiously. Any resemblance to actual persons, living or dead, events, or locales is entirely coincidental.

This book contains an excerpt from the forthcoming book
Complete Me
. This excerpt has been set for this edition only and may not reflect the final content of the forthcoming edition.

Excerpt from
Complete Me

“Almost done?” I ask. “The sun’s been down for at least five minutes.”

Several yards away, Blaine tilts sideways, partially emerging from behind the canvas. I don’t move, but in my peripheral vision, I can see his shoulders, bald head, and shocking red goatee. “In my mind, you’re still bathed in light. Now stand still and be quiet.”

“No problem,” I say, and hear his growl of irritation at my blatant flaunting of his rules.

Despite the fact that I am standing naked in a doorway, our exchange seems perfectly normal. I am used to this now. Used to the way the chilled ocean breeze causes my nipples to peak. The way the sunset stirs something so deep and passionate in me that I long to close my eyes and abandon myself to the violent tapestry of light and color.

I’ve become blasé about the way Blaine’s eye sweeps critically over me, and I no longer flinch when he leans in so close that he almost brushes my breast or my hip as he adjusts my stance to the proper angle. Even his murmurings of “Perfect. Shit, Nikki,
you look perfect” no longer make my stomach tighten, and I’ve stopped imagining my hands closing into tight fists in protest, my nails digging into the soft skin of my palms. I am not perfect—not by a long shot. But it no longer makes me crazy to hear those simple words.

Never in my wildest dreams had I imagined that I could feel so at ease despite being so fully on display. True, I’d spent most of my life parading around on a stage, but during my pageant days I was always clothed, and even during the bathing suit competitions, my girl parts were modestly covered. I can imagine my mother’s mortification if she saw me now, chin lifted, back arched, a red silk cord binding my wrists behind me and then trailing between my legs to twine gently around one thigh.

I have not seen Blaine’s canvas for days, but I know his style and I can imagine how I look captured in pigment and brushstrokes. Ephemeral. Sensual. Submissive.

No doubt about it—my mother would have a cow. I, however, am enjoying it. Hell, maybe that’s why I’m enjoying it. I’ve shaken off Proper Princess Nikki for Rebel Nikki, and it feels pretty damn good.

I hear footsteps on the stairs, and I force myself to remain in my pose even though I want nothing more than to turn and look at him.
Damien
.

Damien Stark is the one thing about which I’ve not become complacent.

“The offer stands.” Damien’s words drift up the marble stairs to the third floor. He hasn’t raised his voice, and yet it is supported by such strength and confidence that it fills the room. “Tell them to take a good long look at their P and Ls. There isn’t going to be any profit, and by the end of the year, there won’t even be a company. They’re in free fall, and when they crash and burn, every one of their employees will be out of work, the company
dead, the patents tied up in litigation for years as creditors fight about the assets. They take this deal, and I’ll breathe life back in. You know it. I know it. They know it.”

The footsteps stop, and I realize he is now standing at the top of the stairs. The room is open, designed for entertaining, and normally someone climbing the stairs would be treated to a view of the Pacific Ocean spread wide across the far side of the room.

Right now, what Damien sees is me.

I have come to know this man so well. His body. His gait. His voice. And I don’t need to see him to know that the tension in his tone isn’t tied to the thrill of chasing a business deal. It’s about me, and that simple fact is as intoxicating as champagne on an empty stomach.
An entire empire needing his attention, and yet in that moment, I am his whole world
. I am flattered. I am giddy. And, yeah, I am turned on.

I’m also smiling, which draws a sharp censure from Blaine. “Dammit, Nik. Get rid of the grin.”

“My face doesn’t even show in the painting.”

He’s teasing me now. “Yes,
sir
,” I say, and then almost laugh when Damien coughs, obviously hiding a chuckle of his own. The “sir” is our secret, our game that we play. A game that will officially end tonight, now that Blaine is putting the final touches on the painting that Damien has commissioned. The thought is a melancholy one.

True, I’ll be happy not to have to stand stock-still anymore. Even the thrill of flipping the imaginary bird to my mother’s overbearing sense of propriety pales in comparison to the way my legs cramp at the end of these sessions. But I will miss the rest of it, especially the feel of Damien’s eyes on me. His slow, heated inspections that make me damp between my thighs and force me
to concentrate so hard on remaining still that it becomes sweetly painful.

And, yes, I will miss our game. But I want more than a game with Damien, and I can’t help the eagerness with which I face tomorrow and the knowledge that it will simply be Damien and Nikki with nothing between us. And as for any lingering secrets … well, with time, those will be brushed away, too.

Hard now to believe that I’d originally been shocked by Damien’s offer: one million dollars in exchange for my body. For my image, permanently on display on a larger-than-life canvas; and for the rest of me at his command, whenever and however he wanted.

My shock had been replaced by blatant pragmatism laced with equal parts of ardor and outrage. I’d wanted Damien as much as he’d wanted me, but at the same time I’d wanted to punish him. Because I was certain that he saw only the beauty queen, and that when he got a peek at the damaged woman beneath the polished veneer he’d reel from the affront to his expectations as much as from the lightening of his wallet.

I’ve never been so happy to be wrong.

Our deal had been for a week, but that week turned into two as Blaine buzzed around his canvas, the wooden tip of his brush tapping against his chin as he squinted and frowned and mumbled to himself about wanting just a little more time. About wanting to get everything—that word again—perfect.

Damien had agreed easily—after all, he’d hired Blaine because of his growing reputation as a local artist, and his skill in handling erotically charged nudes was undeniable. If Blaine wanted more time, Damien was happy to accommodate him.

I didn’t complain for less pragmatic reasons. I simply wanted these days and nights with Damien to last. Like my image on the painting, I was coming alive.

I’d moved to Los Angeles only a few weeks ago, intent on conquering
the business world at the ripe old age of twenty-four. The thought that a man like Damien Stark would want me, much less my portrait, was the furthest thing from my mind. But there’d been no denying the heat that had burned between us from the moment I saw him at one of Blaine’s art shows. He’d pursued me relentlessly, and I’d tried my damnedest to resist, because I knew that what he wanted was something that I wasn’t willing to give.

I wasn’t a virgin, but neither was I widely experienced. Sex is not something that someone with my history—with my scars—rushes into. I’d been burned by a boy I’d trusted, and my emotions were still as ragged as the scars that marred my flesh.

Damien, however, doesn’t see those scars. Or, more accurately, he sees them for what they are—a part of me. Battle scars from what I have overcome and what I continue to fight. Where I thought my scars reflected a weakness, he sees an indication of strength. And it is that ability—to see me so fully and clearly—that has drawn me so irrevocably and completely to this man.

“You’re smiling again,” Blaine says. “I don’t even need three guesses to know what you’re thinking about. Or who. Do I need to kick our personal Medici out of the room?”

“You’re just going to have to live with her smile,” Damien says before I can answer, and once again, I must force myself not to turn and look at him. “Because nothing’s making me leave this room unless Nikki is beside me.”

I revel in the velvet smoothness of his voice, and I know he means what he says. We’d spent this entire afternoon window-shopping on Rodeo Drive, celebrating the new job I will start in the morning. We’d walked lazily down the pristine streets, holding hands, sipping calorie-laden frozen mochas, and pretending no one else in the world existed. Even the paparazzi, those vultures with cameras that have become uncomfortably interested in every little thing Damien and I do, paid us little heed.

Sylvia, Damien’s assistant, had tried to put several calls
through, but Damien had flat-out refused to take them. “This is our time,” he’d said to me, answering my unspoken question.

“Should I alert the financial papers?” I’d teased. “Doesn’t it affect the market when Damien Stark takes a day off work?”

“I’m willing to risk global economic collapse if it means a few hours with you.” He drew my hand up and kissed the tip of each finger. “Of course, the more shopping we do, the more we support the economy.” His voice was low and sultry and full of enticing promises. “Or maybe we should go back to the apartment. I can think of several interesting ways to spend the afternoon that have no fiscal impact whatsoever.”

“Tempting,” I’d retorted. “But I don’t think that I could stand the guilt knowing that I traded an orgasm for fiscal ruin.”

“Trust me, baby. It would be more than one orgasm.”

I’d laughed, and in the end we’d managed to avert global economic disaster (the shoes he bought me are truly awesome) and let me have my orgasm as well. Three, actually. Damien is nothing if not generous.

As for the phone, he’d been true to his word. Despite the constant vibrations, he’d ignored it until we’d pulled up in front of the Malibu house and I’d insisted he take pity on whoever was being so persistent. I’d hurried inside to meet Blaine, and Damien had lingered behind, reassuring his attorney that the world hadn’t collapsed despite Damien’s temporary absence from the cellular airwaves.

Conflict of Interest (Employee Relations Book 1) by Teresa Michaels
The One Rider (Ashandor Chronicles) by Yearwood, Daryl
The Quilt Walk by Dallas, Sandra
One Daddy Too Many by Debra Salonen
Sari Robins - [Andersen Hall Orphanage 01] by One Wicked Night
Lyrec by Frost, Gregory
Experiment in Terror 09 Dust to Dust by Karina Halle
The Search by Shelley Shepard Gray
Black Forest, Denver Cereal Volume 5 by Claudia Hall Christian
Dodger of the Dials by James Benmore