Read Claimed by Her Panthers Online

Claimed by Her Panthers 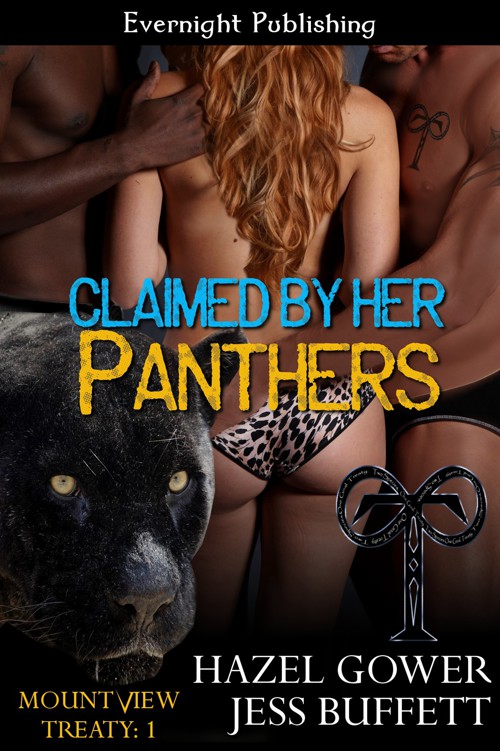 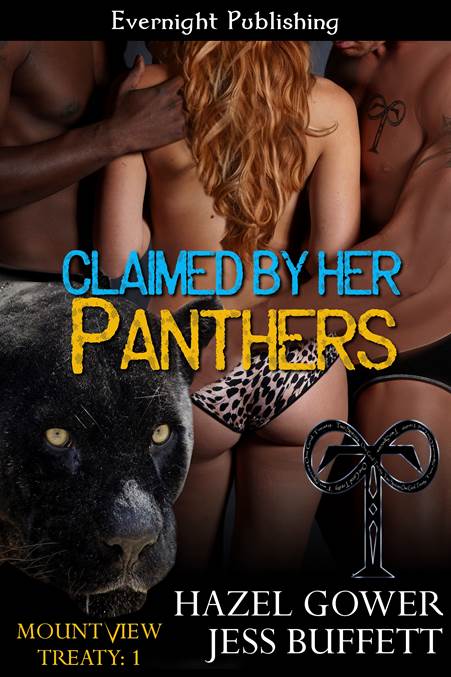 WARNING: The
unauthorized reproduction or distribution of this copyrighted work is
illegal.

To
our families for putting up with our constant chats and focus on our work. We
are very lucky to have such loving and supporting people surrounding us.

CLAIMED BY HER PANTHER

One thousand five hundred years ago

Voices
echoed deep through the mountains as both Shifters and Vampires, for the first
time in history, came together. While neither completely trusted one another,
they had been left no other choice but to take action against their common
enemies, to make a treaty, one that allowed them to focus all their efforts on
annihilating the threat, the true monsters that walked the night.

“How
is a piece of paper supposed to guarantee these animals will not still attack
us in our sleep?” one of the councilmen grumbled.

“It’s
no different from us expecting you leeches to keep your fangs to yourself,”
sneered the closest Shifter, a panther with skin as dark as his fur would have
been if shifted.

“Enough,”
demanded one of the Vampire Elders,
Theroes
. He stood
in front of the podium, his presence fierce and dominating in the burning light
of the torches. “We will all uphold this treaty for the very reason that
separates us from the ones we call enemy. Honor. It is that which defines us,
our moral center. Why we do not hurt or kill the innocent. It is the reason we
are here tonight.”

“What
Theroes
says is true,” one of the Shifter Elders
added. “Our enemies grow stronger by the day, yet we spend so much time and
energy feuding with each other. No more.”

Silence
fell across the crowd, the
communities
eager and yet
fearful of what the Elders had planned. While they each cared for the
individual people in their species, they held the wellbeing of the whole as a
priority, even if that meant sacrificing a few.

“We
gather here tonight to bring our species together. For too long the likes of
Demons and Wraiths have gone unpunished for their cruelty.”
Theroes
addressed the crowd.

“How
is a treaty going to help us do that?” a faceless voice shouted from the
gathering.

“The
Fae
,” the Vampire Elder answered. “While they remain
neutral on many things, they have conceded that the earth, so precious to them,
is slowly being destroyed by the Demons. The
Fae
may
care very little about others, especially humans, but the earth is their
greatest gift.”

“And
we will protect that gift,” spoke a bodiless voice.

Gasps
and murmurs filtered through the air as
Fae
, one by
one, appeared in the cavernous room. Soon more than twenty of the mystical, yet
wary, creatures had joined them. Both handsome and stunningly beautiful, these
fair people gathered onto the podium with the Elders of Vampires and Shifters.

“In
payment for agreeing to protect the earth, we, too, have a gift to bestow.” The
regal looking blond
Fae
arched a brow. “We do not
give this lightly, be assured. This gift will grant those of you chosen, more
strength, energy, and resistance to harm than you already possess. With it, you
will have the means to control the chaotic nature that is in the Demons, Wraiths,
and many more. And while we find no use for the humans, we acknowledge their
necessity and understand your need to protect them from the unknown. So now the
questions stands … who among you are worthy of such a gift?”

Vampires
and Shifters of all walks of life spoke up, the sounds almost deafening in
their bid to gain power.
However a few, small in their
numbers, remained quiet and still.
It was they who were asked to come
forward.

Of
them,
Draken
, the son of the Vampire Elder
Theroes
, was the first to speak. “Exactly what is it that
will be expected from us?”

“To work together, as one.
To rid the
earth of those who poison it.” The
Fae
stepped closer
to
Draken
and the others, who now stood in a line.
“You will become two species with one goal. Guardians of the earth and the
humans you hold so dear. You will fight to wipe out the evil. And you will do
it with a strength known only to a few.”

Three
more
Fae
came forward with what appeared to be wooden
sticks, though there was something otherworldly about them. The
Fae
Elder also withdrew one from the cloth he wore and
raised it. “Remove the garments from your chests. The brand we give you now is
to be placed over your heart, ensuring you never forget its true meaning.”

“A brand.
You want to
brand us?” one of the men asked, outraged.

The
Fae
shrugged. “There is a price for everything. Do
you accept?”

At
the man’s reluctant nod, the crowd gathered and watched as the men and women removed
their upper garments. Only moments later cries sounded, echoing off of the cave
walls as those chosen were marked with a magical brand that would stay in place
regardless of any paranormal healing ability, for the mark went further than
skin deep. It marked their souls.

Awe
and silence fell upon the room as the marks were revealed. The double infinity
symbol, wrapped around the top half of the letter “T”. It glowed in the dim
light, giving off the sense of power.

“It
is done,” the
Fae
Elder announced as the last person
was done. “We leave with your Elders now the tools necessary to grant this
blessing. It will be for them to decide who is worthy.”

“So
what do we do now?”
Draken
asked, still stunned by
the effects of the mark.

“We
keep our word,” the Elder Shifter answered. “We put our energies into stopping
the enemies that threaten us. We may not always get along, but we will never
turn on one another.”

“No,
you will not,” the
Fae
interrupted. “That is a
condition in our agreement. The spell that gives you your extra strength, that
empowers the mark, will break if your two species were to turn on one another
in the name of war.”

“What?”
The Vampire Elder,
Theroes
, wore a mask of fury.
“That was not part of our arrangement.”

“No,”
the
Fae
said carelessly. “However it is part of our
stipulation nonetheless. How can you possibly keep the earth safe if you are
squabbling amongst yourselves? Now, you have even more reason to maintain this
treaty of yours.”

With
that, the
Fae
disappeared as quickly as they had come,
leaving the Elders furious at their underhandedness. Though, since it was the
Fae
, not too many were surprised.

Murmurs
carried through the crowds, with the knowledge of what these men and woman
would have to face. With the threat of the Demons, Wraiths, and others growing
every day, the only thing that would keep their species safe now … was the
Mount View Treaty.

Owen
watched his friend, Joel’s head dart back and forth between him and Stephan.
“Do you think my mum has had the baby yet? I can’t believe she’s having another
child. It’s just gross. I’ll be fifteen next month, and Mum will be forty.”

Owen
shrugged. “Forty to Shifters isn’t old. We live until about two hundred. Gramps
is one hundred and eighty.”

“I
wish I was a Shifter. It’s so cool. Aunt Stacey said she can’t change just ‘cos
she’s mated to one of you. Donavan will, and any other children she has with
your great uncle.”

“I’m
sorry we couldn’t tell you when we were younger, but it’s a secret. The council
in our area didn’t allow it, but now that your aunt is mated to one of us and
your mum needs help to get away from your father we can,” Stephan said to their
best friend, as he laid a comforting hand on the human’s shoulders.

Joel
smiled, showing his braces to Owen. “Do you think my dad will stay away if he
knows Mum, the baby, and I
are
living up in the
mountains with you?”