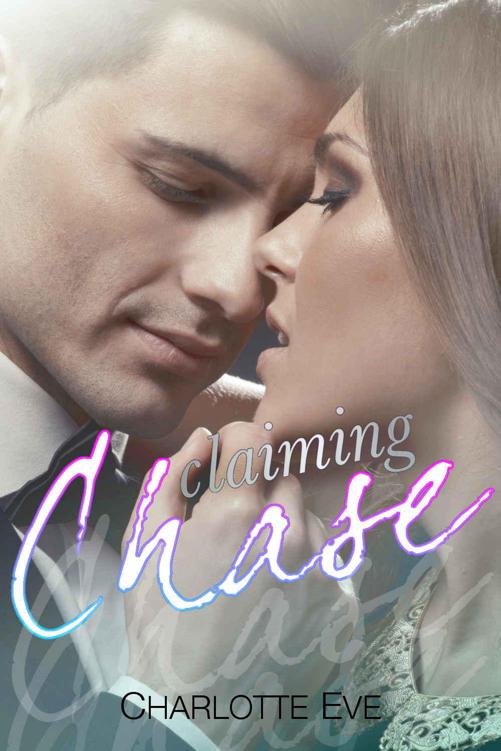 All rights reserved. This book or any portion thereof
may not be reproduced or used in any manner whatsoever without the express written permission of the publisher except for the use of brief quotations in a book review.

This book is a work of fiction. the names, characters, places and incidents are products of the writers imagination or have been used fictitiously and are not to be construed as real. Any resemblance to persons, living or dead, actual events, locales or organizations is entirely coincidental.

Claiming Chase
is a full-length standalone romance novel with a HEA ending.

Due to some adult scenes and situations, it is suitable
only
for those aged 18+.

All characters are of legal age, and are not related by blood.

Charlotte Eve was born to English parents and grew up between London and New York. She returned to England to study, and has now settled in London, where she loves the history, the culture and the tea. Maybe not the rain though. Charlotte still visits New York as often as she can, to shop until she drops.

To be the very first to find out when Charlotte publishes something new, and to find out about free book and ARC offers, be sure to sign up for her mailing list today!

I throw myself down on the bed, my mind so fucking full of him, as I wonder just how I'm supposed to make it through the next seven weeks, here with my goddamn
stepbrother
in this house.

My skin flashes with goose pimples as I close my eyes and imagine him; my mind suddenly flooding with a whole kaleidoscope of images, some real, some imagined: the broadness of his back, the sheen of his skin – tanned brown and shining with sweat, the sculpted definition of his chest as he slowly unbuttons his shirt, his face moving in close to mine as he pins me in a delicious, sexy kiss.

And as I think all this, I finally give in to the urge to touch myself, imagining that it's

fingers slowly unbuttoning my cutoffs then slipping beneath the waistband of my panties, his fingers tracing up and down the hot wetness that's growing between my legs, sending electric shivers of pleasure right through me.

I push my face deep into the pillow, moaning softly as I begin to toy with myself, my mind flooded with him, my eyes closed, my fingers plunging between my legs.

I’ve waited eleven years for this moment, for the chance to see him again.

So why isn’t he
here?

Where are you, Chase?

Standing awkwardly in my black department store dress, lost in this sea of couture, it starts to sink in: he might not even be at this party.

This was a mistake. I’ve bluffed my way in, and it’s only a matter of time before somebody asks me to leave. I reckon I’ve got about ten minutes max, to find him before I’m quietly escorted out of here.

I scan the crowd once more.

The men are all dressed identically in fancy suits, expensive cufflinks and smart shoes. They’ve even got the same kinds of faces, as if they’re all related. So if he were
here, he’d stand out just as much as I do.

There’s nobody quite tall enough. Nobody with those eyes.

God damn it, Chase. Where are you?

I turn around in the direction of the voice, to face a man in his sixties. Is he talking to me? I should have got my story straight. Because  right now I can’t think what to say.

“Yes, you are!” he continues, oblivious to my confusion. “You’re Elizabeth’s secretary, aren’t you?”

I smile politely, about to set him straight and tell him he’s got the wrong person, when he simply carries on talking regardless.

“Ah, how
is
Elizabeth? Is she here tonight? I’ve not seen her for
ages
. She’s usually at these things, isn’t she? Of course, she’s just bought that place in Italy. So I suppose she could be there, with that husband of hers. I remember when they first met, long before your time, of course …”

And as he talks and talks, I realize that it doesn’t matter what I say. Even if I told him I wasn’t Elizabeth’s secretary, whoever she really is, he probably wouldn’t believe me anyway.

So I let him carry on talking. And I’m actually grateful for his presence. Standing here in conversation, even something as one-sided as this, makes me feel a little less of an outsider. I’m drawing less attention to myself now. Hopefully this has bought me a little more time. So I allow my eyes to drift back over the crowd, as I continue my search.

And that’s when I see him, just for a split second. The crowd parts and there he is.

I guess I should have been ready for this moment. After all, I came here to find him, didn’t I? But actually seeing him standing there, so tall, so alive, so
real
… Well, nothing could have quite prepared me for this.

All those feelings I’d buried deep down inside me, all those feelings I thought might have withered away with time, come rushing right back to the surface, as powerful as ever, and certainly not faded — in fact, they’re in glorious Technicolor.

And now that I finally lay eyes on him, I realize that for all the planning it took to get here, all the hard work it’s taken to track him down, I still have no idea what I’m supposed to do next.

“… Ah, the O’Connor wedding! That was one of the highlights of the social calendar of ’89, you know! Fantastic party, just fantastic.”

My new friend is
still
talking, now lost in a reverie. He doesn’t even need an audience for his thoughts anymore, so I take a few steps away from him, trying to keep my eyes locked on Chase. But just then the gap in the crowd closes once more and he’s lost from view.

Okay, Charity. Concentrate. Relax. Think. You know he’s here now. All you have to do is get in his line of sight.

I lean back against the wall of the ballroom, trying to get some respite from the unfamiliar heels that are causing my feet to throb in protest, as I try to gather my thoughts.

But what I can’t control is the trembling that runs right through me, as all those memories come flooding back. That summer.

If I’m honest, I’d got through all those years by telling myself he was dead.

I mean, he might as well have been dead, for all anyone knew. He just took off out of town one night. No note. Nothing. Eleven years of wondering just what the hell had happened to him. Eleven years of trying to forget him, tormented by the not knowing. And then, just last week, it was the biggest cliché of all.

I was sitting in the dentist’s waiting room, idly thumbing through the crappy selection of magazines, when …
bam.
There he was.

I don’t know what possessed me to pick up
Business Insider
.

But it must have been fate.

Because there, on page 46, in an article about the city’s up and coming hedge fund traders, was the photograph that caused me to gasp out loud, right there in the waiting room.

It was the last place I expected him to be. And once I got over the initial shock, I even thought I’d made a mistake. Not Chase. This can’t be Chase. But I looked at the photo once more, at those sapphire blue eyes. It was him. It had to be. There was no mistaking those eyes.

Which is how I find myself here — a gatecrasher at a private function, trying to figure out my next move.

“Drink, madam?” says a voice behind me.

All the Single Ladies by Jane Costello
Avengement (Heart of Stone) by Sidebottom, D H
Target Lancer by Collins, Max Allan
The Probability of Miracles by Wendy Wunder
Center of Gravity by Laura McNeill
My Masters' Nightmare Season 1, Episode 10 Stalked by Marita A. Hansen
Under the Wire by Cindy Gerard
Carter's Treasure by Amy Gregory
Soulmates by Suzanne Jenkins
Touching the Sky by Tracie Peterson