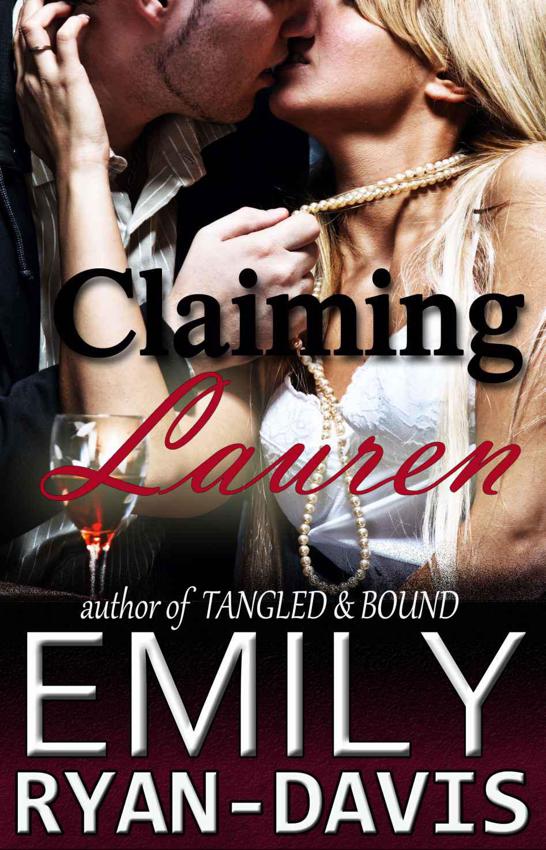 All rights reserved. No part of this publication may be reproduced,
distributed, or transmitted in any form or by any means, including
photocopying, recording, or other electronic or mechanical methods, without the
prior written permission of the publisher, except in the case of brief
quotations embedded in critical reviews and certain other noncommercial uses
permitted by copyright law. For permission requests, contact the publisher at
the address below.

Lauren wouldn't be
his
without Shari Slade's enthusiasm
or Minx Malone's generosity.

My sincerest thanks to both.

To my husband and son, who together ensure I'm never adrift.

One night should have been enough.

Twenty-seven-year-old Lauren Brant is the perfect society wife. She hosts
dinners for her husband's colleagues. She attends charity functions. She's
entirely appropriate...except for her clawing need to submit to a man she knows
only as Master.

Unable to deny her cravings, she arranges to meet Master. No names, no
faces, nothing but submission and sensation. Except it isn't enough. Even
before the night ends, Lauren needs more.

But "more" isn't part of the arrangement and she returns to her
polished life only to discover her estranged husband has come home. After five
years of being invisible to Jacob Brant, Lauren doesn't know what to do with
him. He, however, knows exactly what to do with her...

These are your instructions

Her manicured fingers hovered over the mouse but didn't settle. She
couldn't make the brain-hand connection required to position the cursor to open
the e-mail. Her breath clogged behind a knot in her throat and every sensation
came down to the heavy pulse of arousal beating between her thighs.

Swallowing gulps of climate-controlled air, she gathered
submission
close to her breast and opened the e-mail. She'd read it before. His
instructions weren't new. They'd been living in her inbox for more than a week.
She'd fulfilled every imperative except one.

Tell him what you're going to do.

Panic welled up inside her but she drew on a deep reserve of
strength--the strength he told her she possessed--and exhaled slowly. She
visualized her weakness exiting on a puff of air, dissolving into nothing. When
her lungs were empty and the panic was gone, she picked up the house phone and
dialed his London number.

A sleep-rough voice answered. A man's voice. Never a woman's voice, not
in her husband's house.

"Is anybody there?" Jacob's assistant repeated.

Nothing. It meant nothing. Her marriage would never be anything except a
business arrangement negotiated by calculating old men. Lauren squared her
shoulders and pushed the whisper of hope from her mind. "This is Mrs.
Brant. Please notify Mr. Brant that I'm on the line."

"A moment, please." Without a single remark about the hour,
which approached 2 a.m. in England, her husband's personal assistant put the
call on hold.

Cradling the receiver between her shoulder and ear, Lauren typed practice
words while she waited.

No, that was a lie. She wouldn't leave. She was a twenty-seven-year-old
society wife, bound to him by prenuptial agreement and the public eye. Even if
she could bring herself to walk away from her financial future, she couldn't
face the scrutiny of family, peers and the media. A divorce would devastate her
father, who had nothing left of his empire except what Lauren retained through
her prenup. She deleted the words and typed another sentence.

I've called to let you know I'm in love with another man.

But that was a lie, too. She didn't love anybody. Not Jacob Brant, not
even the man who'd agreed to create and nurture her submission. Not anybody.
Maybe this would be a different conversation if she could speak the love words,
but she couldn't, so she deleted them.

I've called to let you know--

Her stomach somersaulted, the way it always did when her husband's voice
rolled down the line. She could have fallen in love with a man who owned his
voice. She could have--

"I can hear you breathing," he said. She expected the words to
sound distant. They were speaking across an ocean, after all, but his voice was
clear and alert.

She cleared her throat and dismissed the could-haves. They wouldn't be,
and that was a fact she'd accepted years ago. "Jacob. I apologize for
disturbing you this late."

"You haven't disturbed me. What do you need?"

"I've called to let you know I'll be out of town for the weekend.
I've notified the security company and assigned the staff to light duty
only." She paused, reaching for courage.

Jacob spoke into the gap. "You're under no obligation to inform me
of your travels. We've discussed this."

His words were meant in the spirit of kindness. Lauren knew that but
knowing didn't ease the sting of the other meaning. The "I don't care
about your comings and goings because we're nothing but social partners"
meaning. She glanced at her e-mail and took strength from it.

"I didn't call to tell you about my travel arrangements. I called to
tell you I'll be in Michigan. Meeting a man. Submitting--he's a sexual
Dominant. I'm meeting him because I'm going to submit to him. I'm--"

Lauren pressed her lips together and braced herself. For anger. For
disappointment For--

"I hope you have a good flight." He ended the call.

She pulled the receiver away from her ear and stared at it. Her shoulders
were still tense, prepared for a verbal fight, but Jacob hadn't given her
anything. No objection. No...nothing. Only polite words spoken in a neutral
tone of voice.

"I hate you," she said to the silent phone. After replacing the
receiver on the cradle, she closed her text document and read the e-mail again.

These are your instructions.

Using a prepaid disposable cell phone, she sent the text to the man she
knew only as Master and pressed her cheek against the limousine's tinted
window. An arc of lights flew overhead, orange against the before-midnight sky.
A blurry nimbus surrounded each bulb. The driver sped across a bridge. Toward
him
.

He didn't acknowledge her immediately but she knew he was there. The
waiting made her wet, made her forget the life that existed before and after
tonight.

His response so closely mirrored her husband's words that the similarity
gave her a momentary start. Guilt swelled in her stomach even though she knew
her actions mattered little to Jacob. Less than little.

She rubbed her nose against the cool glass, drew a deep breath and pushed
oxygen down into the center of her body. The scent of clean leather and her
desire for submission popped the bubble of guilt.

She wanted him in a dark, silent room, nothing but hot skin, soft sighs,
rough groans of satisfaction. The purr of the limousine's engine was too much
background noise.

They had reservations at a hotel. She wanted to steal towels that smelled
like his sweat, to rub her face in a pillow wrinkled by his sleep. She wanted
to sleep with him and wake up with his cock nudging the cleft of her ass. The
confession was on the tips of her thumbs but before she could type it, her
phone chimed with another incoming text.

Put your panties in your purse before you see me.

Heat shot to her sex. Her hand shook as she slid forward on the seat and
lifted her skirt, then her hips, to draw the satin triangle over her knees.

She rubbed the crotch panel between her fingers. The cotton was already
wet.

Leaning forward, she pulled her underwear over her designer heels.
Yes
.

Instead of obeying, she responded with--

Master, may I have silence until I arrive?

His consideration surprised her. It shouldn't have. Master respected
wants—his and others'. She could learn a thing or two from him. Would her heart
be softer if she said "no, that's not what
I
want"
more often?

She slid her wedding ring from her finger and dropped the gold band into
her purse. Then she stuffed her panties into her bag.

Fifteen minutes later, the driver dropped her off in front of the
three-star hotel she'd booked. Master's choice. Lauren offered to pay for a
higher-end establishment but he'd refused. It didn't matter ultimately. She
wouldn't see their surroundings once they were locked away in the room.

Her skin tingled, taut with anticipation. She hadn't lain her bare body
on fewer than 500-thread-count linens in...ever. Master's hands would be rough,
too. The blue-collar truck driver I'd come to know during the past two years
probably didn't do manicures or moisturizers. The promise of his hard touch
made her skin tighten. As she approached the lobby doors, she studied her
reflection in the glass. Her nipples puckered up against her thin sweater, dark
and obvious through the white silk weave. Her body had fewer reservations than
her mind. Every step she took made the bare lips of her sex slide against one
another, demonstrating their eagerness to part for his touch.

She slowed before the automatic doors could open. The long, lean shape of
a man appeared behind her. His face was a translucent reflection in the glass.
She admired the breadth of his chest, the loose-hipped flow of his stride. A
duffel bag hung from his shoulder, full of the things he'd promised to bring: a
blindfold, so she wouldn't spend the rest of her life searching for his face;
handcuffs for her wrists, so her conscience wouldn't make her hands push him
away. More—he'd promised her a lifetime worth of sensation in this handful of
hours.

All those thoughts fled when he stopped behind her and whispered her
name. Her vagina—no. He liked the other word. Pussy. Her pussy clenched and
squeezed wetness. Without her panties to catch the cream, it slicked over her
inner thighs, warmed between them as she resumed her pace and walked through
the hotel's doors.

Master stood behind her while she checked in. He followed her to the
elevator, crowded her into the back of the small car and pressed the button for
their floor.

Clutching the hand guard for balance, she stared at the carpet. She
desperately wanted to see his face but knew it was for the best that she keep
her eyes down. His proximity, his subtly spicy scent, made her thighs tremble.

"Pull up your skirt." He spoke in a low, rasping whisper.

Worried she would fall on her face if she released the rail, she
awkwardly tugged her hem up with one hand. His hand followed, palming her ass,
separating the cheeks with his thumbs. He kissed the back of her neck, reached
between her legs and rubbed something hard and cold from the top of her slit
all the way back to her ass. The object slid easily, collecting wetness as it
went. She desperately wanted him to return to her pussy, to tease and rub her
entrance. But he didn't. Against her ear, he whispered, "Take a deep
breath."

Instead of backing away, he fit his body against hers. His cock bulged
against her ass, restrained by his jeans but unmistakable. She wanted it
closer. Sliding forward to nestle between her thighs. Spearing into her body
until the head thumped deep. Her abdomen seized upon that imagined, forgotten
sensation and squeezed so tight the metal egg he'd planted inside her shifted.
Sank deeper.

Me Talk Pretty One Day by David Sedaris
The Passion of Dolssa by Julie Berry
The Calling of Emily Evans by Janette Oke
Walking on Sunshine by LuAnn McLane
Something Unexpected by Wendy Warren
Valon: What Once Was (Volkov Bratva Book 0) by London Miller
Monsters & Fairytales by Rebecca Suzanne
The Secret to Success by Eric Thomas
Whitey Bulger America's Most Wanted Gangster and the Manhunt That Brought Him To Justice by Kevin Cullen
Dial H for Hitchcock by Susan Kandel