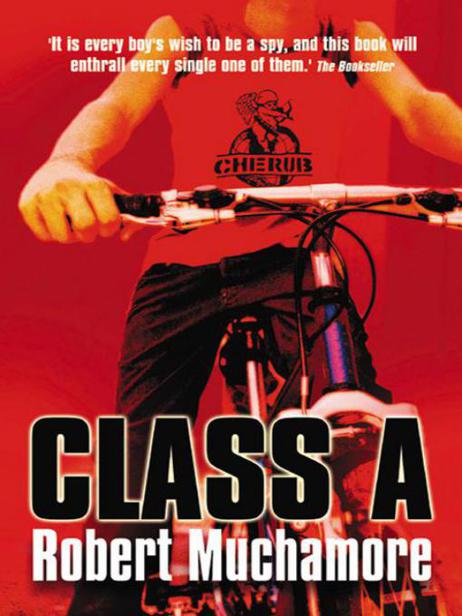 was born in 1972 and spent thirteen years working as a private investigator.

is his second novel in the series.

The CHERUB series has won numerous awards, including the Red House Children’s Book Award. For more information on Robert and his work, visit

Praise for the CHERUB series:

‘If you can’t bear to read another story about elves, princesses or spoiled rich kids who never go to the toilet, try this. You won’t regret it.’

in one sitting, then went out the next day and got the sequel.’ Sophie Smiley, teacher and children’s author

‘CHERUB is the first book I ever read cover to cover. It was amazing.’ Scott, age 13

‘CHERUB is a must for Alex Rider lovers.’ Travis, age 14

First published in Great Britain in 2004

This eBook edition published in 2011

The right of Robert Muchamore to be identified as the Author of the Work has been asserted by him in accordance with the Copyright, Designs and Patents Act 1988.

All rights reserved. Apart from any use permitted under UK copyright law, this publication may only be reproduced, stored or transmitted, in any form, or by any means with prior permission in writing from the publishers or in the case of reprographic production in accordance with the terms of licences issued by the Copyright Licensing Agency and may not be otherwise circulated in any form of binding or cover other than that in which it is published and without a similar condition being imposed on the subsequent purchaser.

A Division of Hachette Children’s Books

CHERUB is a branch of British Intelligence. Its agents are aged between ten and seventeen years. Cherubs are all orphans who have been taken out of care homes and trained to work undercover. They live on CHERUB campus, a secret facility hidden in the English countryside.

WHAT USE ARE KIDS?

Quite a lot. Nobody realises kids do undercover missions, which means they can get away with all kinds of stuff that adults can’t.

About three hundred children live on CHERUB campus. JAMES ADAMS is our twelve-year-old hero. He’s basically a good kid, but he has a habit of getting himself into trouble. There’s also his younger sister, LAUREN. KERRY CHANG is a Hong Kong born Karate champion. GABRIELLE O’BRIEN is Kerry’s best friend. BRUCE NORRIS, another Karate champion, likes to think of himself as a hard-man but still sleeps with a blue teddy under his chin. KYLE BLUEMAN is a more experienced CHERUB agent. He’s two years older than James, but still a good mate.

Cherubs are ranked according to the colour of the T-shirts they wear on campus. ORANGE is for visitors. RED is for kids who live at CHERUB campus, but are too young to qualify as agents. BLUE is for kids undergoing CHERUB’s tough 100-day basic training regime. A GREY T-shirt means you’re qualified for missions. NAVY is a reward for outstanding performance on a mission. If you do well, you’ll end your CHERUB career wearing a BLACK T-shirt, the ultimate recognition for outstanding achievement. When you retire, you get the WHITE T-shirt, which is also worn by staff.

WHAT USE ARE KIDS?

Billions of insects fizzed about in the sunset. James and Bruce had given up trying to swat them off. The boys had jogged ten kilometres along a twisted gravel path. It was uphill, heading towards a villa where two eight-year-olds were being held hostage.

‘Better give us a minute,’ James huffed, leaning forward and resting his palms against his knees. ‘I’m wiped.’

If James had wrung out his T-shirt, he could have filled a mug with the sweat.

‘I’m a year younger than you,’ Bruce said impatiently. ‘You should be the one pushing me. It’s that gut you’re carrying.’

James looked down at himself. ‘Give over, I’m hardly fat.’

‘Not exactly thin either. You’re gonna get crucified at your next medical. They’ll put you on a diet and make you run all that off.’

James straightened up and drank some water from his canteen.

‘It’s not my fault, Bruce. It’s genetic. You should have seen the size of my mum before she died.’

Bruce laughed. ‘There were three Toffee Crisp and one Snickers wrapper in our bin last night. That’s not genetic, that’s you being a pig.’

‘We can’t all have little stick-insect bodies like you,’ James said, bitterly. ‘Are you ready?’

‘We might as well check the map now we’ve stopped,’ Bruce said. ‘See how far it is to the villa.’

James got a map out of his pack. Bruce had a GPS clipped on his shorts. The tiny unit told you your exact position anywhere on the planet to within a couple of metres. Bruce transposed the coordinates on to the map and used his finger to trace the winding gravel path towards the villa.

‘Time to go off road,’ Bruce said. ‘It’s less than half a kilometre away.’

‘It’s really steep,’ James said, ‘and the ground crumbles around here. It’s gonna be a nightmare.’

‘Well,’ Bruce said, ‘unless your plan is to walk up to the front gate of the villa, ring the doorbell and say,

Excuse me love, can we have our hostages back?

I think we’d better cut into the bushes.’

Bruce had a point. James gave up trying to fold the map properly and stuffed it in his pack. Bruce led the way into the scrub, the tinder-dry plants crunching under his trainers. It hadn’t rained on the island for two months. There’d been bush fires in the east. When the sky was clear, you could see the plumes of smoke.

James’ damp skin soon had a coating of grit. He grabbed on to plants, using them to pull his way up the steep slope. You had to be careful: some plants had barbs, others erupted from the dry ground as soon as you pulled on them, leaving you holding a clump of roots, clutching desperately for something sturdier before you tumbled backwards.

When they reached the wire fence around the villa, they backed up a few metres and lay flat on the ground, collecting their thoughts. Bruce was moaning something about his hand.

‘What are you whinging about?’ James asked.

Bruce showed James his palm. Even in the half-light, James could see the blood trickling down Bruce’s arm.

Bruce shrugged. ‘Somewhere coming up the hill. I didn’t realise until we stopped.’

James tipped some water out of his canteen, washing away most of the blood. He got the first aid kit out of his pack; then lit a small torch and clamped it between his teeth, so he could see what he was doing while keeping both hands free. A thorn bulged under the webbing between Bruce’s middle fingers.

‘What kind of stupid question is that?’ Bruce snapped. ‘Of course it does.’

‘Am I supposed to pull it out?’ James asked.

‘Yes,’ Bruce said wearily. ‘Do you ever listen in class? Always remove splinters, unless there is severe and profuse bleeding, or you suspect you’ve punctured a vein or artery. Then apply disinfectant and a clean dressing or sticking plaster.’