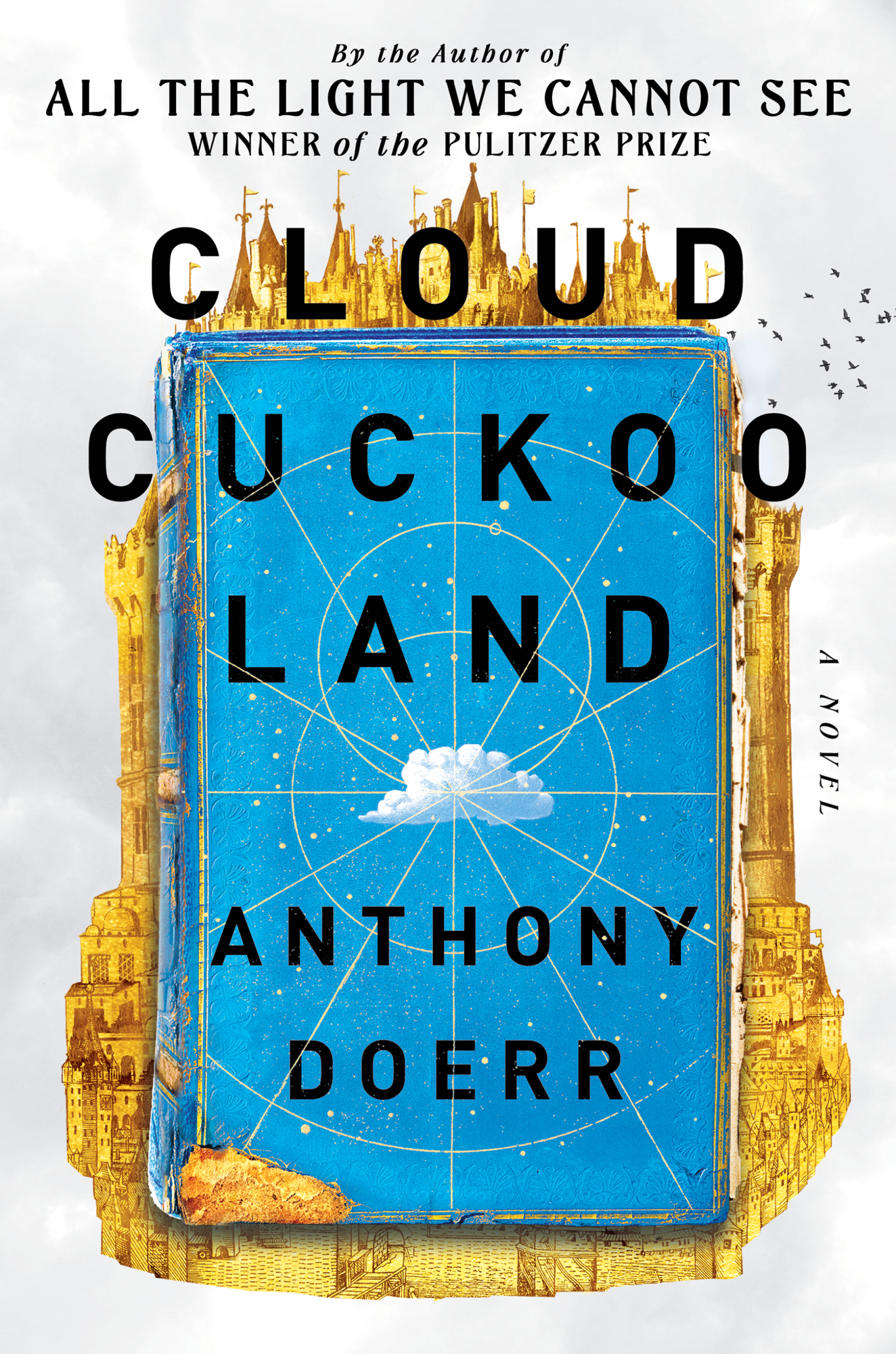 By the Author of All the Light We Cannot See

Winner of the Pulitzer Prize

Thank you for downloading this Simon & Schuster ebook.

Already a subscriber? Provide your email again so we can register this ebook and send you more of what you like to read. You will continue to receive exclusive offers in your inbox. 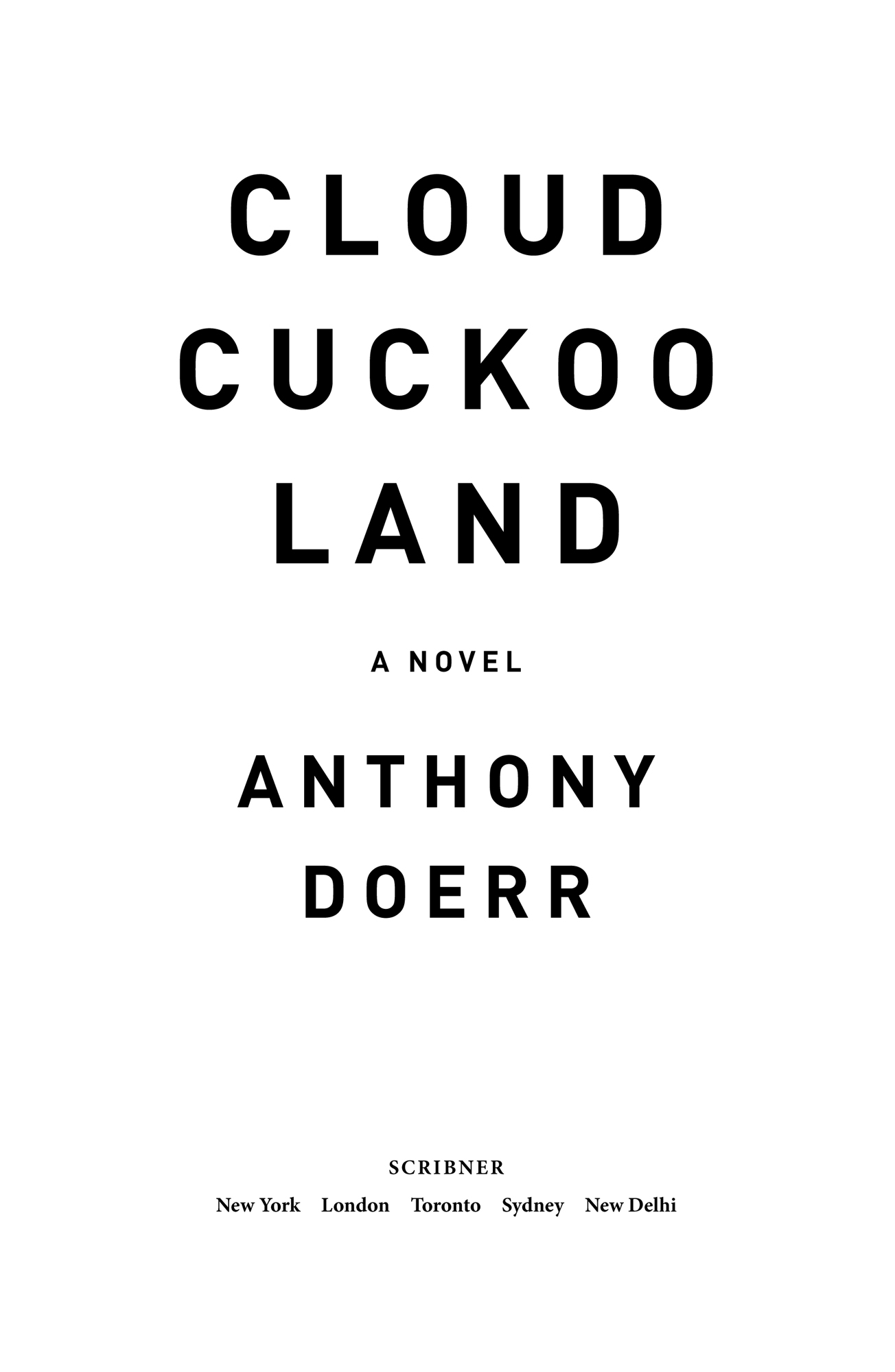 then, now, and in the years to come

Chorus Leader: To work, men. How do you propose to name our city?

Peisetairos: How about Sparta? That's a grand old name with a fine pretentious ring.

Euelpides: Great Hercules, call my city Sparta? I wouldn't even insult my mattress by giving it a name like Sparta.

Peisetairos: Well, what do you suggest instead?

Chorus Leader: Something big, smacking of the clouds. A pinch of fluff and rare air, a swollen sound.

DAY 307 INSIDE VAULT ONE

A
fourteen-year-old girl sits cross-legged on the floor of a circular vault. A mass of curls haloes her head; her socks are full of holes. This is Konstance.

Behind her, inside a translucent cylinder that rises sixteen feet from floor to ceiling, hangs a machine composed of trillions of golden threads, none thicker than a human hair. Each filament twines around thousands of others in entanglements of astonishing intricacy. Occasionally a bundle somewhere along the surface of the machine pulses with light: now here, now there. This is Sybil.

Elsewhere in the room there's an inflatable cot, a recycling toilet, a food printer, eleven sacks of Nourish powder, and a multidirectional treadmill the size and shape of an automobile tire called a Perambulator. Light comes from a ring of diodes in the ceiling; there is no visible exit.

Arranged in a grid on the floor lie almost one hundred rectangular scraps Konstance has torn from empty Nourish powder sacks and written on with homemade ink. Some are dense with her handwriting; others accommodate a single word. One, for example, contains the twenty-four letters of the ancient Greek alphabet. Another reads:

In the millennium leading up to 1453, the city of Constantinople was besieged twenty-three times, but no army ever breached its land walls.

She leans forward and lifts three scraps from the puzzle in front of her. The machine behind her flickers.

It is late, Konstance, and you have not eaten all day.

How about some nice risotto? Or roast lamb with mashed potatoes? There are still many combinations you have not tried.

“No thank you, Sybil.” She looks down at the first scrap and reads:

The lost Greek prose tale
Cloud Cuckoo Land
, by the writer Antonius Diogenes, relating a shepherd's journey to a utopian city in the sky, was probably written around the end of the first century C.E.

We know from a ninth-century Byzantine summary of the book that it opened with a short prologue in which Diogenes addressed an ailing niece and declared that he had not invented the comical story which followed, but instead discovered it in a tomb in the ancient city of Tyre.

The tomb, Diogenes wrote to his niece, was marked
Aethon: Lived 80 Years a Man, 1 Year a Donkey, 1 Year a Sea Bass, 1 Year a Crow
. Inside, Diogenes claimed to have discovered a wooden chest bearing the inscription,
Stranger, whoever you are, open this to learn what will amaze you
. When he opened the chest, he found twenty-four cypress-wood tablets upon which were written Aethon's story.

Konstance shuts her eyes, sees the writer descend into the dark of the tombs. Sees him study the strange chest in the torchlight. The diodes in the ceiling dim and the walls soften from white to amber and Sybil says,
It will be NoLight soon, Konstance
.

She picks her way through the scraps on the floor and retrieves
what's left of an empty sack from beneath her cot. Using her teeth and fingers, she tears away a blank rectangle. She places a little scoop of Nourish powder into the food printer, pushes buttons, and the device spits an ounce of dark liquid into its bowl. Then she takes a length of polyethylene tubing, the tip of which she has carved into a nib, dips her makeshift pen into the makeshift ink, leans over the blank scrap, and draws a cloud.

Atop the cloud she draws the towers of a city, then little dots of birds soaring around the turrets. The room darkens further. Sybil flickers.
Konstance, I must insist that you eat.

She picks up a rectangle inscribed with a dateâ
February 20, 2020â
and sets it beside another that reads,
Folio A
. Then she places her drawing of a cloud city on the left. For a breath, in the dying light, the three scraps seem almost to rise up and glow.

Konstance sits back on her heels. She has not left this room for almost a year.

STRANGER, WHOEVER YOU ARE, OPEN THIS TO LEARN WHAT WILL AMAZE YOU

The Diognes codex measures 30 cm x 22 cm. Holed by worms and significantly effaced by mold, only twenty-four folios, labeled here from A to Î©, were recovered. All were damaged to some degree. The hand is tidy and leftward sloping. From the 2020 translation by Zeno Ninis.

â¦ how long had those tablets moldered inside that chest, waiting for eyes to read them? While I'm sure you will doubt the truth of the outlandish events they relate, my dear niece, in my transcription, I do not leave out a word. Maybe in the old days men did walk the earth as beasts, and a city of birds floated in the heavens between the realms of men and gods. Or maybe, like all lunatics, the shepherd made his own truth, and so for him, true it was. But let us turn to his story now, and decide his sanity for ourselves.

H
e escorts five fifth graders from the elementary school to the public library through curtains of falling snow. He is an octogenarian in a canvas coat; his boots are fastened with Velcro; cartoon penguins skate across his necktie. All day, joy has steadily inflated inside his chest, and now, this afternoon, at 4:30 p.m. on a Thursday in February, watching the children run ahead down the sidewalkâAlex Hess wearing his papier-mÃ¢chÃ© donkey head, Rachel Wilson carrying a plastic torch, Natalie Hernandez lugging a portable speakerâthe feeling threatens to capsize him.

They pass the police station, the Parks Department, Eden's Gate Realty. The Lakeport Public Library is a high-gabled two-story gingerbread Victorian on the corner of Lake and Park that was donated to the town after the First World War. Its chimney leans; its gutters sag; packing tape holds together cracks in three of the four front-facing windows. Several inches of snow have already settled on the junipers flanking the walk and atop the book drop box on the corner, which has been painted to look like an owl.

The kids charge up the front walk, bound onto the porch, and high-five Sharif, the children's librarian, who has stepped outside to help Zeno navigate the stairs. Sharif has lime-green earbuds in his ears and craft glitter twinkles in the hair on his arms. His T-shirt says,
I LIKE BIG BOOKS AND I CANNOT LIE
.

Inside, Zeno wipes fog from his eyeglasses. Construction paper hearts are taped to the front of the welcome desk; a framed needlepoint on the wall behind it reads,
Questions Answered Here.

On the computer table, on all three monitors, screen-saver spirals
twist in synchrony. Between the audiobook shelf and two shabby armchairs, a radiator leak seeps through the ceiling tiles and drips into a seven-gallon trash can.

The kids scatter snow everywhere as they stampede upstairs, heading for the Children's Section, and Zeno and Sharif share a smile as they listen to their footfalls reach the top of the staircase and stop.

Sharif takes Zeno's elbow as they ascend. The entrance to the second story has been blocked with a plywood wall spray-painted gold, and in its center, over a small arched door, Zeno has written:

The fifth graders cluster against the plywood and snow melts on their jackets and backpacks and everyone looks at Zeno and Zeno waits for his breath to catch up with the rest of him.

“Does everyone remember what it says?”

On her tiptoes, Natalie runs a finger beneath each word. “
Stranger, whoever you are, open this to learn what will amaze you
.”

“Oh my flipping gosh,” says Alex, his donkey head under his arm. “It's like we're about to walk
into
the book.”

Sharif switches off the stairwell light and the children crowd around the little door in the red glow of the
EXIT
sign. “Ready?” calls Zeno, and from the other side of the plywood, Marian, the library director, calls, “Ready.”

One by one the fifth graders pass through the little arched doorway into the Children's Section. The shelves, tables, and beanbags that normally fill the space have been pushed against the walls and in their places stand thirty folding chairs. Above the chairs, dozens of cardboard clouds, coated with glitter, hang from the rafters by threads. In front of the chairs is a small stage, and behind the
stage, on a canvas sheet hung across the entire rear wall, Marian has painted a city in the clouds.

Golden towers, cut by hundreds of little windows and crowned by pennants, rise in clusters. Around their spires whirl dense flights of birdsâlittle brown buntings and big silver eagles, birds with long curving tails and others with long curving bills, birds of the world and birds of the imagination. Marian has shut off the overhead lights, and in the beam of a single karaoke light on a stand, the clouds sparkle and the flocks shimmer and the towers seem illuminated from within.

Natalie sets down her speaker and Alex leaps onstage and Marian calls, “Careful, some of the paint may still be wet.”

Zeno lowers himself into a chair in the front row. Every time he blinks, a memory ripples across the undersides of his eyelids: his father pratfalls into a snowbank; a librarian slides open the drawer of a card catalogue; a man in a prison camp scratches Greek characters into the dust.

Sharif shows the kids the backstage area that he has created behind three bookshelves, packed with props and costumes, and Olivia pulls a latex cap over her hair to make herself look bald and Christopher drags a microwave box painted to look like a marble sarcophagus to the center of the stage and Alex reaches to touch a tower of the painted city and Natalie slides a laptop from her backpack.

Marian's phone buzzes. “Pizzas are ready,” she says into Zeno's good ear. “I'll walk over and pick them up. Be back in a jiff.”

“Mr. Ninis?” Rachel is tapping Zeno's shoulder. Her red hair is pulled back in braided pigtails and snow has melted to droplets on her shoulders and her eyes are wide and bright. “You built all this? For us?”