Read Cloud Walking (A Find You in the Dark novella) Online

Cloud Walking (A Find You in the Dark novella) 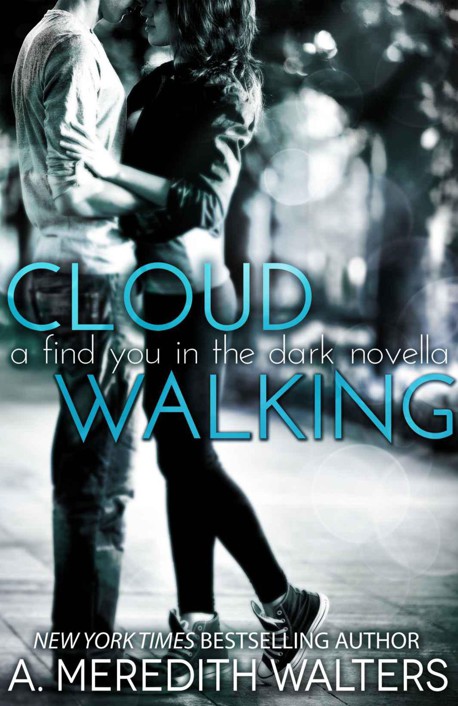 This is a work of fiction.  Names, character, places and incidents either are the product of the author's     imagination or are used fictitiously.  Any resemblance to persons, living or dead, business establishments, events, or locals, are entirely coincidental.

This ebook is protected under the copyright laws of the United States of America.  Any reproduction or other unauthorized use of the material herein is prohibited without the express written permission of the author.

For my mom who made me believe in myself

I miss you every day.

A Find You in the Dark

I
loved him. I hated him. I wanted to kiss him. I wanted to strangle him. I was a walking, talking contradiction. There were days I was so torn by my conflicting emotions that I thought I would be ripped in half. Staring at my best friend and secret object of my undying love, I wondered if I would ever get off this crazy train of emotions swirling around inside me. I didn't like feeling this way. But the truth was I couldn’t remember a time I didn’t feel this aching need to completely immerse myself in all things Daniel Lowe.

And he had no idea. That was the tragedy of it all.  Here I was, miserably in love with him and he had no flipping clue. But Maggie knew.  She saw right through my carefully constructed facade to the beating heart inside my broken chest.

“
He’s an idiot. Ignore him,” Maggie told me softly as I watched Danny, yet again, go after Kylie Good, his annoying girlfriend who was currently mad at him about something.  I detested that anyone could see how much Daniel’s ignorance bothered me.  But it was Maggie and if anyone could be trusted with these traitorous emotions, it was her.

“
I know. Ignoring in progress.” I gave Maggie my best, could-care-less smile and tried to force down the rest of my lunch.  Maggie was looking at me with that sympathetic way of hers that was both appreciated and one hundred percent annoying.  Not that I would ever tell her that.

“
So, have you talked anymore to Clay?” I asked her, hoping to move the conversation effectively away from my non-existent love life.  I watched as Maggie started to blush.  Wow, Maggie May Young was bright red.  And over a boy too!  I never thought I’d see
that
happening.

“
No. I haven’t seen him around,” she replied but I could see by her face that it wasn’t for lack of trying.  Mags was hopelessly crushing on Clayton Reed, the new boy at Jackson.  He was in my creative writing class and I personally thought he was a little strange.  But he
was
hot, so I tried to reserve judgment.

Maggie started telling me about some movie she wanted to go see, but I wasn’t paying attention.  My eyes were fixed on Danny;  his arm slung over Kylie’s shoulders, as he leaned down and kissed her gently on the lips. I guess they had made up.  They
always
made up. And I was always left with feeling as though my heart were being ripped out of my chest so he could do a tap dance on it.

My eyes started to burn and I squeezed them shut so I wouldn’t cry.  I had known Daniel my entire life. He and Maggie had been my best friends since infancy. Most of my memories included them in one shape or form.

I think I was five when I first realized I sort of loved him.  A boy in our kindergarten class had just pushed me down and taken my jump rope. I remember sitting in the mud on the playground crying while Maggie held my hand and cried along with me.

Daniel, who at the time hadn't hit any sort of growth spurt and was mercilessly teased for his “girly”  crop of unruly blond curls, had dropped the football he was playing with and took off after the boy and my jump rope. He had knocked the kid down and punched him. The teacher had run over and pulled      Daniel off the other boy. Our entire class racing over to see what had happened.

Daniel’s face had been grubby and his shirt torn from the scuffle, but he wore a big smile on his face. And as the teacher led him off to the principal’s office, he had held the jump rope out for me to take.

Daniel Lowe. My savior. My perfect guy. The boy who would never love me the way that I loved him.

Kylie Good would never be good enough for him. No girl in the world ever would be. Maggie complained that I held Daniel up on some sort of pedestal. I really didn’t. I just chose to focus on the beautiful and caring boy underneath the image he had carefully constructed over the years.

The boy who had fought to get my jump rope back. Even if I saw that boy less and less now that we were older. I refused to forget about him. And every once in a while, I still saw him there, beneath everything.

“
I heard that Carl Feldman was thinking of asking you out. That's the rumor anyway,” Maggie was saying as I continued to stare at Danny and Kylie, who were still spending way too much time exploring each other's mouths.

I blinked, coming back to the conversation. “Carl Feldman?” I asked, wondering if I had heard her correctly. “Seriously? Carl
I wear my pants too tight
Feldman? Why do you think I would care about that particular piece of information?” I asked her, balling my trash up into a pile on the table.

Maggie flicked her straw paper in my direction. “Come on. Carl is kinda cute. And if he likes you, I say go for it!” She made a funny harrumph sound and picked up her lunch tray. I looked at her suspiciously. Since when did she voice any sort of preference when it came to my love life? That wasn’t Maggie at all. She could give a crap about anything resembling dating and relationships. I often worried that life was going to slip her by without her even knowing it.

So her suggestion put me immediately on edge. I tossed my trash in the garbage can and followed her into the hallway. “Okay, why the sudden interest in who I date? Spill!” I told her, as we reached her locker.

Maggie groaned as she pulled her books out.  “Why do I have to have some sort of ulterior motive? Is it wrong to want to see my bestie happy?”  Okay, now I was really concerned.  She never used the term “bestie.”  She hated it and threatened to gouge my eyes out if I ever spoke it in her presence.  I glared at her, putting steel into my eyes.  Too bad I couldn't look threatening if I tried.  Instead of being intimidated, Maggie laughed.

I rolled my eyes.  “Okay, it's just that I heard Daniel say he was asking Kylie out this weekend.”  She finally said.  Ahh.  Well, it all made sense.  Daniel and I were supposed to go to Charlottesville to see the new Jason Statham (mmm yummy) movie at the IMAX theater.  We had been planning it for a month.  And now it seemed as though once again I was going to be ditched in favor of getting a piece.

“Oh,” was all I could wrangle out, my throat suddenly feeling too tight and my cheeks burning hot.  I should be used to this by now.  It wasn't unusual for Danny to ditch us.  I just wish it would stop hurting so much.

Maggie's eyes were sympathetic but for once, I was glad she wasn't a consoling hug type of person.  Because I think I might have punched her.  I straightened my back, hefting my book bag up onto my shoulder and shook my hair out.

“Well, that's fine.  But that doesn't mean I'm asking Carl out.  What's the point of dating someone when you can already see clear as day what their packing under their shorts?  And let me say, from what I can tell, it's not impressive,” I deadpanned.  Maggie chuckled.

“Good point.  Maybe I can get out of my dad's work thing.  I could go see the movie with you,” Maggie suggested.  I linked my arm with hers as we walked down the hall.

“Yeah, maybe.  But are you sure you wouldn't rather be hanging out with librarians on your Saturday?  I mean that sounds like a barrel of fun,” I teased as we made our way to our biology class.  I watched as Maggie's eyes zeroed in on a dark-haired boy at the end of the hallway.  Her entire body froze up and she had stopped listening to me.

At that same moment, I saw Daniel walking toward us, an obnoxious smile on his face.  Both Maggie and I were stuck in some sort of lovesick paralysis.  I was the first to snap out of it.  I pulled on Maggie's arm and she startled, as though she forgot I was there.  Hmm.  I had never seen her so fixated on someone before.  I wasn't entirely sure what to think about that.

“Come on.  Before I'm forced to talk to him,” I told her, motioning discreetly toward Daniel, who had been stopped by his friend, Jake Fitzpatrick before he could make it over to us.  Maggie clicked her tongue in disapproval.

“You can't hide from him.  He's one of your best friends.  You really should talk to him before things get even more awkward than they already are,” she advised.  I grit my teeth.  That was easier said than done.  I was not a confrontational person, choosing instead to let things lie until I exploded.

But I think I was almost at implosion point. “Yeah.  Okay,” I said, hurrying her down the hallway, her head still craning over her shoulder, looking for that dark head again as I staunchly refused to allow my eyes to wander to the person they so desperately craved.  The pair of us were a mess.

“Rachel!  Maggie!” I called out, following them as they left the school at the end of the day.  I had been trying to find them all afternoon.  Rachel and I had plans to go see a movie tomorrow.  It was the new action movie I had been wanting to see and she had offered to come with me.  But now, Kylie wanted to go out.  I was torn.  I was always fucking torn.  I hated to disappoint Rachel.  It was the worst feeling in the world.  But Kylie was so damn demanding sometimes.