Read Come Back To Me Online

Come Back To Me 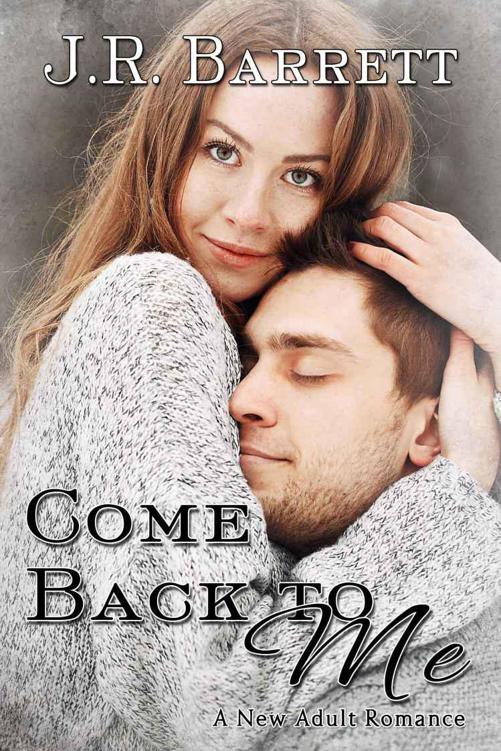 This book is dedicated to my husband,
my own personal James Mackie.

The author wishes to thank JW Manus
for her invaluable and shiny assistance.

COME BACK TO ME

Copyright © 2009 Julia Barrett. All rights reserved.
No part of this book may be used or reproduced in full or part without written permission from the author, except in the case of brief quotations in articles or reviews.

“H
ey, Cara, come over here. There’s something I want to show you. C’mere.”

A hand on the door knob, Cara whirled around, startled at the unexpected sound of a male voice. She spotted her neighbor, Mr. Walker, her best friend Karen’s father, standing at the edge of his driveway. He motioned to her.

“C’mere and take a look.” He disappeared beyond the far side of his house.

Wondering why Mr. Walker was home, Cara set her schoolbooks on her front porch and slipped off her shoes and socks. If her mother was there she’d fuss about Cara’s tomboy ways, but her mom spent every Tuesday afternoon at her club playing bridge. She wouldn’t be home for several hours.

Comfortably barefoot, Cara walked through the cool spring grass, cutting over the low picket fence that separated the two properties.

Karen wasn’t around. Cara had seen her friend before she’d left school. Every Tuesday and Thursday, Karen’s mom drove her straight to dance class and then to gymnastics. Cara figured Mr. Walker had the afternoon off. He was her dad’s law partner and it was rare for either man to leave work before suppertime.

Karen’s father was always working on some project or another. He probably had something interesting to show her. They were the only family on the block to have a model train set. Mr. Walker added to it every Christmas. The train ran through three rooms of their large finished basement. One room was meant to be the desert, one the mountains, one the plains. The train traveled through caves and over bridges. Cara wondered if he’d added a new section, maybe that was what he wanted to show her.

Cara had been thrilled when the Walkers moved in three years before. She and Karen quickly became inseparable. They sat together in Mrs. Hughes’ fourth grade class, Miss Benson’s fifth grade class and in another month they’d graduate together from Miss White’s sixth grade class. Everyone at the school teased them about being twins even though they looked nothing alike. Karen was blonde and bubbly, always giggling. She had pale skin, blue eyes, a perfect rosebud mouth, cute freckles and what Cara’s dad called a button nose. And she was tiny. Cara’s mother described her as petite. In contrast, Cara was a quiet girl and a serious student. She felt awkward standing next to Karen, like she was a galumphing elephant in comparison to a fragile butterfly.

Cara had experienced a growth spurt this year and at five feet, seven inches, she was the tallest girl in the school. Her ungainly long legs and arms didn’t necessarily work in tandem and that didn’t help her feel any less self-conscious.

Karen took dance lessons and gymnastics and everyone talked about how graceful she was. Cara, much to her mother’s chagrin, hated dance and gymnastics and instead played basketball and touch football with the boys. Her hair was a deep auburn, not blonde, and unlike Karen’s perfectly straight hair, Cara’s curled so tightly in the Iowa humidity that it was nearly impossible to tame. For simplicity’s sake she kept it pulled back in a ponytail. Her skin tanned quickly in the summer and she never managed to stay out of the sun like she was supposed to. Her eyes were a weird color, not brown, not green, not gray, but something in-between. And they changed color depending upon the weather and the lighting in a room.

Cara thought her mouth was too big, her feet too long, her legs too skinny. She was embarrassed by the fact that some of the girls in her class, including Karen, were already wearing bras while she still wore undershirts like a little kid. Her mother said she should be glad she didn’t have to bother about that. Cara wasn’t quite certain why girls even grew breasts. She knew adult women had them, but whenever she asked her mother why, she was told that nice girls didn’t talk about it. Nice girls didn’t talk about a lot of things, like why her mother bled every month and where on earth the blood came from. After asking numerous times and getting no answer, Cara knew better than to ask again. Her mother would shoot her one of those looks. The only explanation she received was that something happened to grown up women, something unpleasant, and if she was lucky it wouldn’t happen to her for a long time.

Cara jogged around the corner and found Mr. Walker waiting by the back door.

“Come downstairs, Cara,” he said. “You have to see this.”

He turned and vanished through the doorway. Cara could hear him trotting down the basement stairs. Now she was sure he’d bought a new section for his train. Cara trailed after him. He waited for her at the bottom of the stairs, surprising Cara by grabbing her hand as she walked past him. She drew back, but he smiled reassuringly and tugged her towards the far end of the basement.

“Did you get a new section for your train, Mr. Walker?”

“Yes, I did. I want to show it to someone and you’re the first one home.”

They entered the backroom and Cara immediately noticed the new landscape.

“It’s Vermont.” He kept hold of her hand, giving it a squeeze. “Do you like it?”

Cara felt a little uncomfortable about the way he held tight to her hand, but she’d known him for three years so she figured maybe it was okay.

“Yes, it’s very pretty. I like the pine trees. They look very realistic.” She was proud of the fact that she’d used an adult word.

Mr. Walker tugged her closer until she pressed up against his side. “Look over there.” he pointed. “See that mountain?” That’s supposed to be Stowe, the ski resort.”

“Oh.” Cara didn’t know what else to say. She had no idea what Stowe was. Mr. Walker smelled like aftershave. She felt his other hand tug on her ponytail.

Mr. Walker was breathing in her ear. He sounded winded, like he’d been playing basketball.

“I have some schoolwork to do, Mr. Walker.” Cara tried to politely disengage her hand from his. He gripped hers tighter, pulling her along with him to an old couch. He sat down and grabbed her hips, forcing her onto his lap.

Cara was shocked. She didn’t think she was supposed to be sitting on Mr. Walker’s lap. She hadn’t even sat on her dad’s lap since she was little. It just didn’t feel right and she began to squirm. He laughed in response, his laughter soft against her ear.

“Mr. Walker, I really think I should go.”

Cara felt cold and hot at the same time. She wanted to get off his lap, but she didn’t want to be rude and she couldn’t understand why he was talking to her like this. Maybe he thought he was being nice, but Cara didn’t like it. It didn’t feel good. It felt strange. She didn’t think Karen would like to find her sitting on her dad’s lap. Cara tried to stand up, but Mr. Walker grabbed her arm and squeezed.

“Ow! You’re hurting me. Please let me get up. I really have to go home.”

“Not yet.” He pushed her down onto the couch and lay over her.

No matter how hard she pleaded with him, Mr. Walker didn’t stop. His voice grew cruel and rough, and he held her down despite her struggles and her tears.

When he had finished with her, Cara felt sick to her stomach.

Mr. Walker smoothed her hair, as if trying to make the caress tender. He kissed her cheek. “I would never hurt you. I love you like my own daughter.”

A thought flitted through Cara’s mind.
Do you do what you just did to me, to Karen? Do you shove Karen down on the couch and do that? My dad doesn’t do this to me.
But she shut it up as soon as she heard herself think it.

“I want to go home now.” She reached for her underwear, pulling it on before he could stop her. What would her mother say when she saw blood on her underwear? Is that why her mother bled every month, because her father did this? Cara felt like throwing up.

“Cara, honey, listen, uh, don’t tell your mom and dad about this. It’s kind of a secret thing, between the two of us. I mean, it’s a pretty special way to show you how much I care about you. You’re Karen’s best friend and I don’t want that to change. I think if Karen knew we did this, she might not want to be friends with you anymore. She might be kind of mad at you.”

“Mr. Walker, I don’t want to do that again.” Cara couldn’t seem to stop crying.

“It’s okay, honey. I understand. We’ll see. It doesn’t always hurt you know. Sometimes it feels good. One day you might like it.”

“You go on home then, Cara. I’m sure you’ll feel better. I didn’t mean to hurt you. Just remember, it’s our secret. I wouldn’t want to upset Karen. You come and see her later. She’ll be home in a couple of hours.”

He let her go. Cara stumbled up the stairs, feeling sore and sticky between her legs. She jogged stiffly across the lawn and up the porch steps; grateful nobody was at her home. She used the key hidden in the flowerpot to open the door, picked up her discarded books and shoes and ran to her room. How would she get rid of the telltale panties? She couldn’t throw them in the laundry. Her mom would know. Her mom would know what she’d done. She undressed quickly, stuffing them into one of her snow boots in the back of her closet. Next time she was home alone, she’d put them in the trash burner in the basement, but all she could think of right now was taking a bath. She had to wash Mr. Walker’s smell off her. The sweet smell of his aftershave and the smell of something else, something she couldn’t put a name to.