Read Comfortably Numb: The Inside Story of Pink Floyd Online

Comfortably Numb: The Inside Story of Pink Floyd 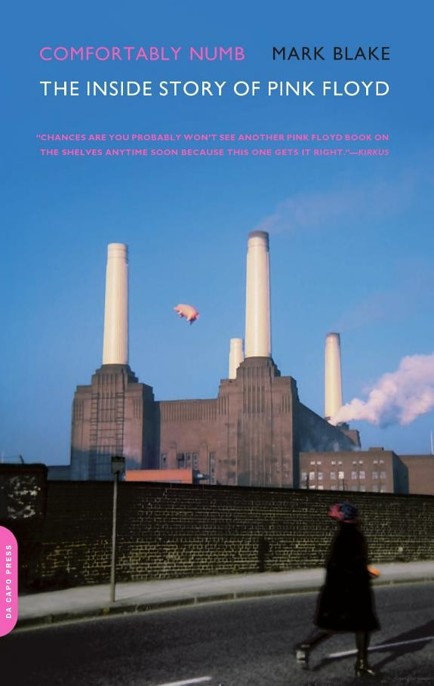 CHAPTER ONE - PIGS HAVE FLOWN

CHAPTER FIVE - THE SPACES BETWEEN FRIENDS

CHAPTER EIGHT - WHY ARE YOU RUNNING AWAY?

CHAPTER TEN - THE GRASS WAS GREENER

‘It would be fantastic if we could do it for something like another Live Aid. But maybe I’m just being terribly sentimental - you know what us old drummers are like.’

‘I really do hope we can do something again.’

‘I don’t think we’d get through the first half an hour of rehearsals. If I’m going to be on stage playing music with people, I want it to be with people that I love.’

‘I think Roger Waters has my phone number. But I’ve no interest in discussing anything with him.’

J
ust when it seems as if rock music has long lost its power to offend, Pink Floyd’s reunion has thrown the establishment into a panic. It is 2 July 2005, and the band are due to perform at the Live 8 charity concert in London’s Hyde Park, but the event has already over-run by nearly an hour. In the words of the 1960s counter-culture from which Pink Floyd emerged, ‘The Man’ is not happy. Except ‘The Man’ is now Tessa Jowell, Secretary of State for Culture, Media and Sport. Word filters back to the media that she has called an emergency meeting backstage and is threatening to end the show early, fearful that a crowd of 200,000 people spilling into the capital’s streets in the small hours will constitute an act of public disorder.

The last time David Gilmour, Richard Wright, Nick Mason and Roger Waters fell even remotely foul of a politician was some twenty-five years earlier. Then, Pink Floyd’s hit single, ‘Another Brick in the Wall Part 2’, featured a choir of London inner city schoolchildren shouting a chorus of ‘We don’t need no education’, much to the disgust of the then Prime Minister, Margaret Thatcher.

In 2005, though, the political landscape has undergone a seismic shift. Live 8 has been staged to raise awareness about Third World deprivation and to urge world leaders, convening for the following week’s G8 Summit, to tackle the issue of poverty. However, one of those very same leaders, Prime Minister Tony Blair, has just let slip that, regardless of the band’s political motivation, he is looking forward to watching Pink Floyd’s performance at Live 8. Blair is a rock fan, a sometime guitar player and, briefly, the lead singer in a band while at university. When press articles about the PM’s rock ’n’ roll years appear, they’re predictably accompanied by a photo of the youthful Blair in 1972, beaming behind ripples of unkempt long hair. If it wasn’t for the grin, he could even pass for a member of Pink Floyd, or, at worst, a member of their road crew, perhaps one ‘let go’ for being too cheerful by half and getting under Roger Waters’ feet.

Who knows whether the Floyd-loving Prime Minister lent his voice to the argument? But, after the emergency meeting, which involved the Metropolitan Police and the Royal Parks Agency, Tessa Jowell allows the show to continue. There is even talk of blankets being distributed to those audience members wishing to spend the night in the park. News of the near-cancellation will only make it back to the viewing public in the following day’s newspapers. But to anyone even dimly aware of the shared history between Pink Floyd’s members, the real miracle is that they have agreed to be here in the first place.

Live 8 has been a day filled with glowing and not-so-glowing performances, alongside the usual car-crash moments that occur when pop stars get anywhere near a worthy cause. Organiser Sir Bob Geldof has rounded up the heads of pop’s royal family, using the same persuasive tactics deployed when staging Live Aid in 1985: namely, the implied suggestion that any band that refuses will dent their credibility for ever. U2, Madonna, Sir Elton John, Sir Paul McCartney and numerous younger, unknighted rock stars have agreed to give their services for free. The bill is random, newcomers following old hands, but, as the day wears on, a pecking order of sorts emerges.

Around the world, nine further concerts are taking place in cities such as Rome, Berlin and Philadelphia. For many gathered at these events, though, it is a single performance, taking place tonight in London, that generates the greatest anticipation. As Geldof grudgingly admits, ‘In the US, why this band, with such a painful history of disorder, have agreed to do this, is a far bigger story than Live 8 itself.’ On the day that Pink Floyd’s appearance is announced, whispers circulate of a promoter guaranteeing $250 million for the four to tour.

Pink Floyd’s recording career began in 1967. They have since sold over 30 million copies of their 1973 album,
Dark Side of the Moon
, alone. Yet their public falling-out has sometimes threatened to overwhelm their artistic achievements. It has been more than twenty-four years since the four members shared a stage. In the meantime, Gilmour, Wright and Mason have forged ahead with the Floyd name, releasing albums and staging tours, while Roger Waters, previously the group’s bass guitarist, but also their most prolific songwriter and acknowledged ideas man, has raged from the sidelines, once declaring that his former colleagues ‘took my child and sold her into prostitution, and I’ll never forgive them for that’.

Forgiveness may not be on the agenda, but today, the four have struck a truce, of sorts. Pink Floyd haven’t made an album since 1994, and, under normal circumstances, coaxing what guitarist David Gilmour describes as ‘this great lumbering behemoth to rouse itself out of its torpor’ would have been an arduous process. Yet with the lure of a good cause and Geldof’s expert arm-twisting, it has taken just three weeks between the reluctant Gilmour agreeing to play and the re-formed Floyd arriving on stage in Hyde Park.

At 10.17 p.m., David Beckham, officially the biggest footballer in Britain, introduces Robbie Williams, officially the biggest pop star in Britain, on stage. Williams’s voice is noticeably frayed, but he slips easily into his routine - part boy band heart-throb, part Norman Wisdom - camping it up, and making it difficult to imagine anyone having the crowd quite so on their side.

Under the circumstances, it doesn’t bode well for next act, The Who. In 1964, Pink Floyd’s drummer Nick Mason, then studying architecture at Regent Street Polytechnic, watched The Who perform ‘My Generation’ and experienced a moment of epiphany: ‘Yes,
that’s
what I want to do.’ With two of their number now gone, The Who’s surviving members, Pete Townshend and Roger Daltrey, plus hired hands, plough through ‘Who Are You’ and ‘Won’t Get Fooled Again’. They avoid any direct communication with the crowd and, in the case of Townshend and his impenetrable, wraparound shades, any eye contact. The Who’s performance is ferociously tight, with glimpses of their former chippy glory, but it seems to be over almost before it has begun.

The show is approaching its tenth hour, the park is submerged in inky darkness, McCartney is still to play the closing slot and, on the sidelines, presumably, Tessa Jowell’s blankets are being unpacked for those planning a long night under the stars.

At 10.57 p.m., without any fanfare or a celebrity introduction, an eerie yet familiar sound begins drifting across the park. Any remaining roadies on stage suddenly disappear into the wings. The sound rises in volume: the steady, metronomic pulse of a heartbeat. Searchlights sweep over the audience, the video screen behind the stage flickers into life, and the heartbeat grows louder. Then comes the voice: ‘
I’ve been mad for fucking years
.’ A snippet of speech from a Pink Floyd roadie recorded nearly thirty years earlier at Abbey Road Studios. It’s followed by the ominous whirr of helicopter blades, a ringing cash register, and a disengaged cackle of laughter repeated again and again, before segueing into a long, hysterical scream; the closing moment of ‘Speak to Me’, the very first track on
Dark Side of the Moon
.

The goosebumping scream seems to rise in pitch and volume, then is replaced by the soothing opening bars of ‘Breathe’. As the searchlights dim and the stage is bathed in light, the audience are allowed their first proper view of the men on stage. In a curious reversal of the decree by the Wizard of Oz to ‘pay no attention to the man behind the curtain’, the men are all we’re left with. The flying pig and aerial shots of Battersea Power Station drifting on the video screen behind the stage are familiar Floyd motifs, but, for once, they fail to draw the attention away from the group themselves. In the past, Pink Floyd thrived on their anonymity. As their success grew so did their stage sets; all designed to divert an audience’s gaze away from the four unremarkable-looking, long-haired men on stage. By 1980, they played behind a specially constructed wall, as part of Roger Waters’ lordly protest at the dehumanising nature of the music industry. When Gilmour coaxed ‘the lumbering behemoth’ back into service in the eighties and nineties, he, Mason and Wright were augmented by younger session musicians, shimmying female backing singers and a Spielberg-style stage show of blinding lasers that overwhelmed the original band members.

Tonight, Pink Floyd look curiously real. They could be any group of fifty-something businessmen on a dress-down Friday, or assembled in the clubhouse waiting for the rain to subside and a round of golf to commence, even if their shared uniform of faded jeans might contravene club rules. At the back, Nick Mason, his expression frozen somewhere between studious concentration and a knowing smile, patters around his kit. The recent author of a book about the band, Mason has become the group’s most publicly visible and media-savvy member, although his decision to continue in Pink Floyd after Waters’ departure led to a rift with his close friend that only healed in recent years. The group’s self-appointed diplomat (‘I’m the Henry Kissinger of rock,’ he informs journalists later), Mason has also been instrumental in helping Geldof broker this reunion.

Mason gave up studying architecture in 1966, when the fledgling Pink Floyd signed their first management deal. He always planned to go back to it, if playing drums in a rock ’n’ roll band didn’t work out. Now, three decades on, the walrus moustache and crown of long dark hair that were his visual traits throughout the early seventies are long gone. Clean-shaven, a little jowly, with his grey hair undiminished but cut short, the sixty-year-old drummer now resembles the architect he nearly became. His white shirt even displays a few telltale creases, suggesting that it’s fresh out of a box.

Stage left, Richard Wright hunches over his keyboards. Wearing a dark linen jacket over a white shirt, Wright’s rather hangdog demeanour once prompted an observer to liken him to ‘an ex-champion jockey down on his luck’. In truth, while briefly studying to become an architect himself, Wright has an artier air about him still, and looks more like a semi-retired seventies rock star than his drumming counterpart. A gifted musician, Wright found himself relegated in Pink Floyd, a victim of his own reticence and the strong personalities surrounding him. In 1979, he suffered the ignominy of being forced out of the band by Roger Waters, on the grounds that he wasn’t contributing sufficiently to the recording of their latest album,
The Wall
. Wright endured a period of depression and a spell in exile, before slowly being reintroduced into the band under Gilmour’s aegis, and eventually acquiring a stake in the group he’d helped to form.