Read Coming To Reason (A Long Road to Love) Online

Coming To Reason (A Long Road to Love) 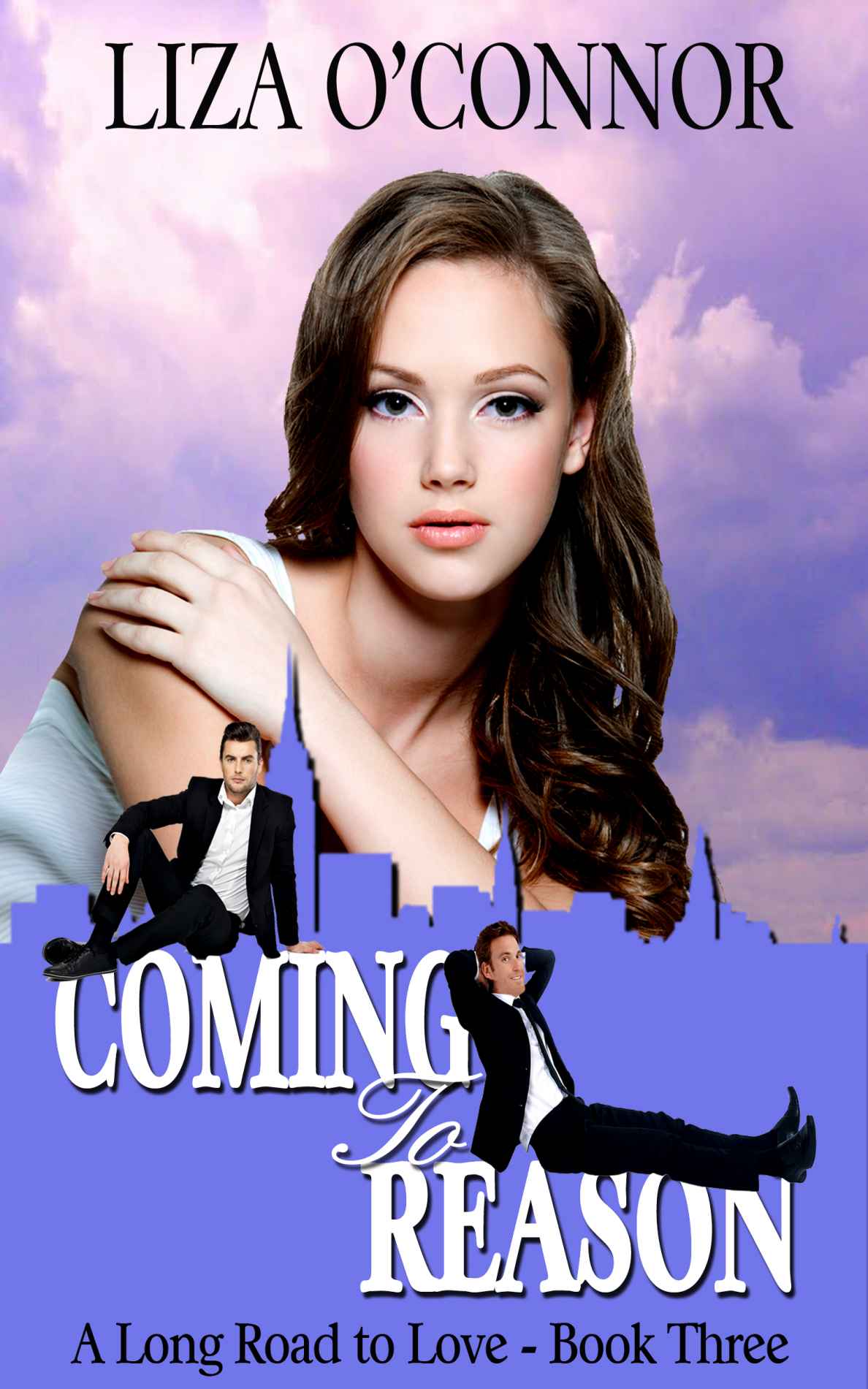 Book
3: A Long Road to Love

Any reproduction of
this work in whole or in part in any form by any electronic, mechanical or
other means, now known or hereafter invented, including xerography,
photocopying, electronic copying, or recording is forbidden without the written
permission of the author.

All characters in
this book come from the imagination of the author and have no relation
whatsoever to anyone bearing the same name or names, titles or professions.
They are not based on or inspired by any known individual and any resemblance
to a person living or dead is purely coincidental.

Book 3 of A Long Road to Love series

Carrie has
committed to an inter-species engagement with Trent, her billionaire boss.
Presently, he is eighty percent dreamboat and twenty percent nightmare. When he
fires her so they can become a ‘normal couple’, everything heads south.

Providing her
a stark contrast, her new boss, Dan Marshal, is everything a woman could want.
But for Carrie, her heart is taken and thus, her path to reason remains long
and arduous.

When her
relationship with Trent explodes in a shocking fashion, finally her heart gives
up and reason takes over. She realizes a brighter future and a better man has
been at her side all this time. But can she overcome the obstacles in her path
to secure him? Or is Carrie doomed to never know true love?

Warning: If you loved Carrie and Trent as a couple, this
book may break your heart.

Liza O'Conner writes books that speak to my soul. Carrie is a
character you will not soon forget.

series: Read them. They're funny. You
won't regret it!

I
stubbornly use British logical punctuation instead of US illogical punctuation
when it comes to commas and periods next to dialog tags. The U.S. rule was
created before the revolution, in times of shoddy printing presses, and it’s
time Americans revolt and throw it out. (We threw out the presses long ago.
I’ve not idea why we cling to the silly rule.)

An
example of British logic: He called it a “whirly bird”. (Note the period is
after the dialog tag.) Illogical US punctuation would have it: He called it a
“whirly bird.” That is not logical. The tags are highlighting a specific item
in the sentence, while the period is for the entire sentence. Now the whirly
bird has captured the period and will no doubt feed it to its babies. That is
if whirly birds have babies.

But
this goes beyond whirly birds. This goes to national and personal self-esteem.
It is time we drop this silly rule. How can we ever gain international respect
when we punctuate so foolishly?

Carrie Hanson woke to the loving caresses of her boss and
boyfriend, Trent Lancaster. She smiled as he rolled on top of her and dwarfed her
petite four-foot-six body. God, she loved the man he’d become.

He possessed many admirable traits now: strong, thoughtful,
a wonderful sense of humor, caring, and smart. Unfortunately, he had a couple
of qualities she outright wished he didn’t. Due to his terrible upbringing,
Trent would erupt into temperamental outbursts over the stupidest problems.
Worse yet, he was a billionaire; a six-foot-tall, blue-eyed, dark-haired,
handsome bachelor of society. Wolves could have done a better job raising him than
his horrid, but thankfully dead, parents.

His eyes sparkled with love as he tugged off her teddy and perused
her body. She breathed in at the warmth of his hand. His touch always set her
skin on fire.

With a soft chuckle, she corrected him, “It’s Sunday.”

His eyes rounded for a moment. “I love Sundays.” He
captured her hands and moved them to the ornate metal of the headboard, curling
her fingers around the bars.

“I love you,” he added and kissed her with hungry passion,
while his hands caressed her breasts.

A haze of nirvana enveloped her for a blissful moment, then
a jarring ring pulled her from heaven. Releasing the headboard, she slapped the
black radio alarm by her bedside, determined to quiet it before it ruined the
mood. Unfortunately, the ringing continued.

“No!” she yelped when Trent rolled to the side and climbed off
the bed. He reached for his pants on the floor and extracted his phone.

Whoever called had him scurrying to the bathroom so he
could talk in private. Carrie hoped a friend didn’t need money. His moments of
generosity never worked out well.

She glared at the closed door.
Who calls at six in the
morning on a Sunday?
She sat up, grabbed her teddy, and put it on. They had
been so close to having morning sex, something she greatly liked since it put
her in a good mood the entire day. However, she’d just discovered interrupted,
no morning sex, made her disgruntled and grumpy.

She pushed out of bed and followed him to the bathroom, only
he’d locked her out. His action surprised her. He rarely even bothered closing
the door, never mind locking it.

Curious, she pressed her ear against the balsa wood. His
low, refined voice came through loud and clear.

A second later, he opened the door and pulled her into his
arms. “Missed me?” He captured her mouth with his.

She pushed away from his kiss, knowing if he planned to see
someone soon, he’d booted morning sex to the curb. “Don’t heat me up if you
don’t plan to finish what you start.”

He let her go and stared at her with concern as she sat
down on the edge of the tub. “Has something upset you?” he asked.

“No…yes…I… Who were you talking to?

He finished brushing his hair and disappeared back into the
bedroom without responding, which annoyed her even further.

By the time she followed him out, he’d dressed in what she
called ‘casual rich’—high quality light wool pants and a tailored white silk
shirt.

“So I’m guessing we aren’t going hiking?” she grumbled,
pissed he’d yet to tell her who
had
called.

“Sorry. Can you take all my clothes in your closet to the
cleaners?”

“Would you like me to polish your shoes, as well?”

He
wrapped his arms around her and pulled her close. His
delicious cologne melted away her grumpiness and turned her into pudding. “I’ll
pay you back for the cleaner’s bill.”

He would, too. A month later, but he’d throw some
outrageous ‘interest’ on the money, making the chore quite profitable. He hated
she had to watch her money and stay to a budget. So, whenever he could contrive
a situation, he’d throw her extra money.

“Your clothes are fine. They don’t need to visit the
cleaners.”

He kissed her neck. “
Actually
, they do. They smell musty. Sure you won’t let me buy you
central air?”

He released her, and sat on the bed as he tied his
beautiful Italian shoes, custom-made for his precious feet.

She sat beside him. “So, where are you going, and when will
you return?”

“I’m going in to work and I’ll be back by dinner.”

He paused. “Nothing you need to worry about.”

He breathed in and released a heavy stream of air while
staring at the carpet between his feet.

“I’m going in, too.” Carrie retrieved a pair of jeans, but
before she could put them on, he grabbed and tossed the pants onto a wooden
rocking chair. He then pulled her to the bed beside him.

“I need to handle this by myself.”

He stared up at the ceiling. “Because it’s
my
company. When there’s a problem, I need to fix it.”

Before she could formulate a counter argument, he placed
two fingers over her lips, silencing her. “Three months ago, you warned me
someday you’d need to leave Lancaster Chairs.”

She had suggested it
might
be necessary, given the
horrible rages he’d throw without warning or cause. Both times, the triggers
had been business issues. She pressed her hand upon his leg, worried where the
line of thought headed. “But you’re well now. You’ve become the perfect boss.”

He gripped her hand and touched the massive engagement ring
on her finger. He had surprised her with the family heirloom two months ago.
She’d still feared his temper, so she’d asked for a long engagement. Honest
ly
, they came
from such different worlds, sometimes they seemed like different species.

Thinking he played with her ring to remind her of the
doubts she had, she pressed her head against his arm. “You’ve improved beyond
my wildest imagination. You’re as close to the perfect man as I could ask for.
If you want to set a date—”

“No,” he said without hesitation.

She frowned, wondering what his change of mind meant. Two
months ago, he’d wanted to marry her at once.

Cupping her face, he stared into her eyes. “You had every
reason to delay the wedding. I was a basket case back then, and while I agree
I’m now better, I’m not yet good enough for you.”

The cloud of worry lifted, and her heart swelled with love.
“Shouldn’t I decide?”

He shook his head. “I’m still growing up from the petulant
child I’ve been all my life.” He exhaled and met her gaze. “To continue my
progress, I need your assistance.”

She marveled at his new
ly
acquired ability to admit
weaknesses. “Anything,” she promised.

Leaning in, he kissed her forehead. “My therapist believes
your desire to be the world’s best EA and my girlfriend is hampering my
attempts to grow up. You take care of all my problems. He says I need to handle
matters for myself.”

Fear spread from her chest out to her fingertips, making
her numb, slowing her brain. “Are you saying you want to break up with me?”

“Never!” He covered her face with kisses.

She pushed him away. “Then what?”

“It’s time to do what we talked about months ago. You need
to quit Lancaster Chairs and get another job.”

Was he insane? He couldn’t survive two hours without her. “We
should do this slow
ly
, so you can wean off.”

She’d always liked his therapist, until now. “Maybe I
should talk to him.”

“No! You’ll only prove to him I’ve made no progress at
all.” He gripped her hands. “I need to stand on my own two feet. You have to
let me grow up and take responsibility for myself.”

“All right.” Her stomach roiled with doubt. He’d be calling
her back in a week to help save his company again.

Still, growing up meant he’d make mistakes along the way.
She had to let him take the reins, even if doing so had disaster written all
over it. “I’ll start looking on my lunch hour.”

“No. We need a clean cut. As of now, you no longer work at Lancaster
Chairs.”

“Trent! We have to have a transition. We’ll need to find a
new EA. I’ll need to train the person in.”

He pressed his fingers to her lips. “I completed the
interviews and I’m going in to train my EA. I’ve got it all under control.”