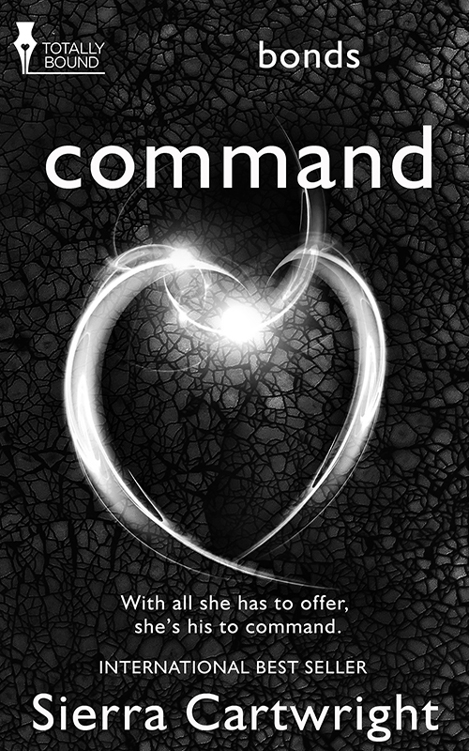 Book three in the Bonds series

With all she has to offer, she’s his to command…

Aria DeWitt is a runaway bride. Only months away from her wedding, she panicked, returning her engagement ring and donating her gorgeous gown to charity.

She’s less than pleased when she’s reassigned to a new work project and sent to work with Grant Kingston in the middle of nowhere. She knows of his reputation as a recluse and genius, but she isn’t prepared for how handsome, powerful and deliciously Dominant he is or how he ignites something inside her that no man ever has.

Grant isn’t happy when his cherished solitude and creativity are shattered by Aria’s unwanted and unwelcome arrival. That is until he glimpses her carefully concealed vulnerability. Aria’s confidence and responsiveness intrigue him, ensnaring him in a way he’d never believed possible, chipping away the ice that shrouds his heart.

As he interacts with her, he realizes why she ran from marriage. She’s never met someone strong and complex enough to hold her interest. And suddenly, he’s determined to be that man.

For Sierra’s Super Stars. You are simply the best! And for Shayna whose name should always be in lights! Especially for January Apted whose tireless support is so very much appreciated.

For Miss Whit and Angie who are always there. Cathy with the constant and daily inspiration and vision. For ELF who had the guts to say, “Wanna know how you can be better?” And for BAB, who’s always the biggest cheerleader and greatest friend.

Team Totally Bound, you challenge me and astound me. For Rebecca who endures more than an editor should have to—here’s to YOUR happily ever after.

And most especially YOU, yes, YOU, who picked up this book and love the written word as much as I do.

So What:
Miles Davis

I Want Your Sex:
George Michael

“My…?” Aria Dewitt sat back in her chair and stared at her boss and friend, Julien Bonds. In the time she’d known him, he’d asked some ridiculous questions. But this had to be the most audacious. “What the hell has my love life got to do with anything? And it’s none of your business. It’s illegal to ask.”

“Sue me.” He picked up a bright red, organic apple from his desk and tossed it into the air. Without looking, he caught it in one hand. “But first, give me the details.”

Aria felt as if she’d stepped into an alternate reality. Which wasn’t all that unusual when walking into Julien’s office. “There are no details.”

“It doesn’t suck,” she protested.

Because he was right, she exhaled instead of arguing. “Has anyone ever told you you’re an asshat?”

She looked at him. Unable to discern anything in the steadiness of his gaze, she asked, “Why did you really call me here?”

“It’s time we had a talk.” Julien’s tone was flat.

She gripped the bottom of her chair. She knew how to react to his exuberance as well as his frustration. But she knew that when he lacked emotion, he often had bad news.

Desperately she raced through snippets of recent events, trying to think of where she’d screwed up. She came up with nothing. Her focus was as intense as it had ever been. She was logging more than sixty hours a week at the office. Her phone was always on, and she made sure she was available on nights and weekends. She met all her deadlines while managing to push a group of creatives toward ever-higher levels of technical genius.

“I’m sending you to Los Alamos to work with Grant.” Julien remained unmoving, letting the implications of his statement ricochet in her brain.

“Grant Kingston?” she asked, despite knowing there wasn’t any other Grant in her boss’s inner circle. Julien was reputed to be one of the most creative, brilliant people on the planet. Until this moment, she’d shared that opinion. “That’s worse than working with you.”

“I’m not sure whether to feel insulted or flattered.”

“He’s stalled. And I need him to take a more active role at Bonds. That’s where you come in.”

Julien’s suggestion was, at best, ludicrous. “This is a joke, right?”

“I think it’s a spectacular idea,” he assured her. “One of many I’ve had today. And when you come back to California, you’re going to thank me for the opportunity.”

For a few seconds—an absolute eternity for Aria—she was rendered speechless. “I’ve heard he lives in a cave.”

“It’s a very nice cave.” His words were light, but he didn’t smile. “And it’s more like a…house built into a mountain. Not actually a cave, really.”

Dread slithered through her stomach. He was serious.

Six years ago, Julien had contacted her for the first time. He’d said he’d been following her career. At twenty-four, barely out of college, she’d joined an Internet retailer that was in danger of becoming obsolete. She’d worked her way up the corporate ranks, and her vision for same-day delivery of products had helped them to raise the funding needed to increase their business and compete on a global level.

When she’d received the text message inviting her to a clandestine after-hours meeting at 1, Bonds Street in Cupertino, she’d refused.

But Julien Bonds was not easily dissuaded when he wanted something.

For a year, he’d relentlessly pursued her.

Finally, Aria had become disenchanted with her company’s egotistical CEO. Evidently Julien had heard about the falling out. The next time he’d approached her, she’d agreed to meet with him.

When he’d sent his jet to shuttle her from Los Angeles to northern California, she’d been star-struck.

Everyone in the industry had heard rumors about Julien’s astounding headquarters, but the first view of his round building at night had made her mouth drop. Even though it was after eight p.m., lights had blazed from almost every window. The campus had been teeming with activity.

The moment she’d stepped inside the architectural wonder, she’d understood him perfectly. To him, creativity wasn’t just a concept, it was a demand—an expectation—and she’d instinctively responded to that consuming challenge.

He’d promised her that, as Director of Global Strategy at Bonds, she’d have autonomy, a ridiculously large salary, unbelievable benefits and her own staff. In return, she’d have objectives, and they would be damn difficult to meet. The job would come with stress, long hours and a demanding boss.

And that was where she operated best—at the intersection of impossible and imperative.

As she’d listened to him, she’d realized he’d studied her like he did any problem, figuring out her talents and what she needed in terms of money and challenge before he’d made an offer.

Aria had accepted on the spot.

Run by Douglas E. Winter
Trouble by Nadene Seiters
Captured By You: A One Night of Passion Novella by KERY, BETH
Jasper John Dooley, NOT in Love by Caroline Adderson, Ben Clanton
In the Beginning Was Information by Werner Gitt
The Dogs of Littlefield by Suzanne Berne
Easy Bake Coven by Liz Schulte
The Best of Enemies by Jen Lancaster
Killer Kisses by Sharon Buchbinder
With a Kiss (Twisted Tales) by Fowers, Stephanie