Read Compact with the Devil: A Novel Online

Compact with the Devil: A Novel 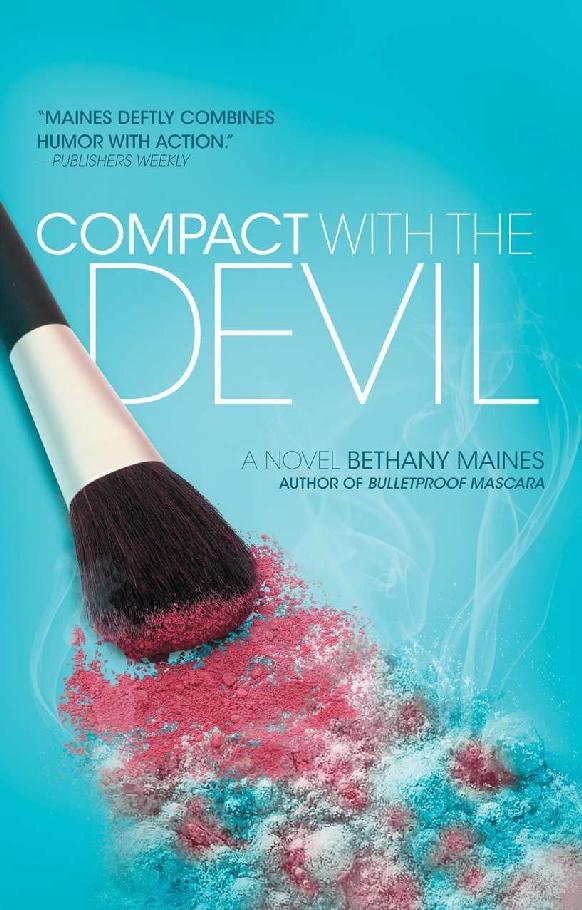 The City of Lights is never so romantic as it is on New Year’s Eve—and for Carrie Mae agent Nikki Lanier, it’s never been so deadly.

Still reeling from her break up with CIA agent Z’ev Coralles, Nikki is tracking a Basque anarchist who may be planning to kill fellow Carrie Mae operative Camille Masters. Nikki’s search leads her to Camille’s son, bad-boy pop star Kit Masters, who is traveling to Paris on tour. When Nikki receives a picture of Z’ev with another woman, Kit is happy to help mend her broken heart—but first, they’ll have to fend off masked gunmen so Kit can arrive safely at his New Year’s Eve concert.

When dissension in the ranks of Carrie Mae gets Nikki fired from the mission, she defies orders and recruits her friends to help solve the case. But staying alive long enough to protect Camille—while untangling her increasingly messy love life—will be the hardest thing Nikki’s ever done.

All rights reserved, including the right to reproduce this book or portions thereof in any form whatsoever. For information address Atria Books Subsidiary Rights Department, 1230 Avenue of the Americas, New York, NY 10020.

ATRIA
PAPERBACK
and colophon are trademarks of Simon & Schuster, Inc.

Colombia I: Rocking Around the Christmas Tree

Colombia IV: How It All Went Down

Germany I: Your Time is Gonna Come

Germany VII: You Can Get What You Need

France III: Say It Ain’t So

Paris I: I Love Paris

Paris VIII: I Need TV When I Got T. Rex

Paris X: You Turn the Screws

Paris XII: Have to Answer to Us

Paris XIII: Underneath Your Clothes

Paris XV: Assault on the Opera

Paris XVI: Fork in the Road

Paris XIX: The World According to Brandt

COLOMBIA I
Rocking Around the Christmas Tree
December 24

Nikki Lanier popped open the hood of her small red Fiat and stepped out onto the sun-washed, dusty Colombian road that tumbled away in a series of jogs and bends in either direction. The far side of the road was a mass of greenery from which issued an occasional lonesome birdcall and the repetitive chirp of insects. The near side was a wall of clay bricks broken only by a set of tall iron gates and a smaller wooden door a few yards away. A scrawny calico cat sunned itself on top of the wall, ignoring Nikki, who was pretending to examine the inner workings of the engine. The blast of hot air from under the hood added to the sheen of sweat covering her skin. The monotonous tick of the cicadas should have made her feel alone; instead it simply seemed to underscore her feeling of being watched. She held still and listened for a sound behind the insects.

Her cell phone buzzed against her hip bone, vibrating in her pocket. Fireworks of adrenaline burst in her chest, shooting sparkles of fire down her arms. They were supposed to be in the communication blackout phase. Had something gone wrong with the team? Nikki checked the phone’s face. Her boyfriend’s picture blinked next to “incoming message.”

Against her better judgment, she pressed the accept button.

“Call me. We need to talk,” was all the message said.

Nikki froze. In the entire history of man, nothing good had ever come from the phrase “we need to talk.” A grating noise pulled her back into the moment.

Turning, she saw the small door in the wall slowly opening. Nikki whipped back around and looked at the engine again, stuffing the phone into her purse. She put Z’ev firmly out of her mind. It was time to concentrate on the mission. The team depended on her.

She heard the crunch of footsteps as two men emerged from the doorway. They were wearing jeans and T-shirts, with guns slung across their shoulders. Nikki knew at a glance that the black, snub-nosed machine guns were TEC-9s. Nikki waved happily at the two men, who remained expressionless.

“Boy, am I glad to see you guys!” she chirruped, trying to look as harmless as possible.

“Sorry, fellas,” said Nikki, jutting out one hip and sounding as American as possible. “
No habla español.
I don’t suppose y’all
habla
car?” She made little steering motions with her hands and then broke the imaginary wheel. The men exchanged looks.

The second man shrugged. They both slung their guns behind them and approached Nikki’s rental car. Nikki beamed.

“You can see it’s just busted all to fooey,” she said, holding the smile and resting a hand on the upraised hood.

Both men ducked under the hood and peered at the engine workings. Nikki maintained her smile, put both hands on the hood, and then slammed it down on their heads. There was a satisfying
whonk
sound, and when she raised up the hood both men fell, unconscious, onto the roadway.

“
No todos los americanos son estúpidos, mus amigos
,” Nikki said in perfectly clear Spanish, looking down at the bodies. “But it’s nice to know you think I’m hot.” She collected the guns and pulled the guards to the side of the road, pushing them into the underbrush.

Moving quickly, Nikki went through the door in the wall and walked briskly down the path as if she had followed it a hundred times before. The path led to a small, round building that overlooked the gate and the main house. She slithered through the doorway, letting the TEC-9s lead the way. The caution proved needless since the hut was empty except for blinking TV screens that showed various black-and-white viewpoints of the grounds, including a middle-gray version of Nikki’s Fiat and a small delivery van arriving at the back gate.

“Right on schedule,” she said, checking her watch. Her rescue plan was moving smoothly through phase one and into phase two—extraction.

Nikki flipped the switch that opened the back gate, and the van pulled through without even stopping. Reaching under the console, Nikki ripped out a series of wires, and one by one the TV screens went blank. Then, taking a tool kit out of her purse, she climbed on the console and inserted a bug into the junction of
wires where they emerged into the room. When a repair crew came in, all they would see was the mess of ripped-out wires under the console; meanwhile, Nikki’s team would be able to see everything going on in the Alvarez compound. Climbing down from the console and dusting off her hands, Nikki frowned.

“We need to talk,” she muttered to herself. “There’s nothing to talk about!”

Nikki jogged toward the main house, still carrying the TEC-9s. But her mind was racing faster than her feet, considering the things Z’ev might want to talk about. Two days from now they were supposed to meet in Mexico for two weeks of Christmas fun, sun, and making out on the beach. And probably lots of those little drinks with the umbrellas in them.

Nikki liked this plan; it was a good plan; had lots of good points to recommend it. Avoiding one more depressing, obsessive holiday with her mother, for one thing. And it was convenient since she was already in South America on “business,” anyway. Not that Z’ev needed to know that. And had she mentioned umbrella drinks and making out? Nikki approached the house with a worried expression that had nothing to do with the looming oak doors. Z’ev had canceled this vacation before. Twice before, in fact.

Nikki kicked open the front door and quickly scanned the room. In one corner was an enormous fake Christmas tree that had been decorated with a Martha Stewart–like pathology. The rest of the room boasted a mix of traditional Colombian and totally drugged-out
Miami Vice
decor. It was Colombian eighties. Nikki paused her scan at the fireplace; there was a large fertility god on the mantel, large in a way that required the kind of hand gestures fishermen usually reserved for the best fish stories.
No, really, it was
this
big.
While Nikki was taking a moment to consider why men felt the need to decorate with their penises, a maid
ambled into the room accompanied by the slow
sluff, sluff
sound of her house slippers on the tile floor.

“
Buenos días
,” said the maid, shutting the door and ignoring the fact that Nikki was carrying not one but two submachine guns. Nikki smiled uncertainly.

“
¿Puedo tomar su bolso?
” the maid asked, gesturing to Nikki’s purse. For lack of anything better to do Nikki handed over her purse, shrugging it awkwardly over one of the guns.

“Where is Mrs. Alvarez?” asked Nikki, momentarily forgetting her Spanish.

Agent T3: d'Artagnan (Superhero Romance) (The D.I.R.E. Agency) by Hahn, Joni
Touching Ice by Laurann Dohner
Homebody: A Novel by Orson Scott Card
That Girl From Nowhere by Koomson, Dorothy
Fair Play by Tracy A. Ward
The Lion's Game by Nelson DeMille
The Possibility of Trey by J.A. Hornbuckle
Home is Where the Heart Is (Home #1) by Cheynee Filkov
Flash and Filigree by Terry Southern
The Death of Lorenzo Jones by Brad Latham