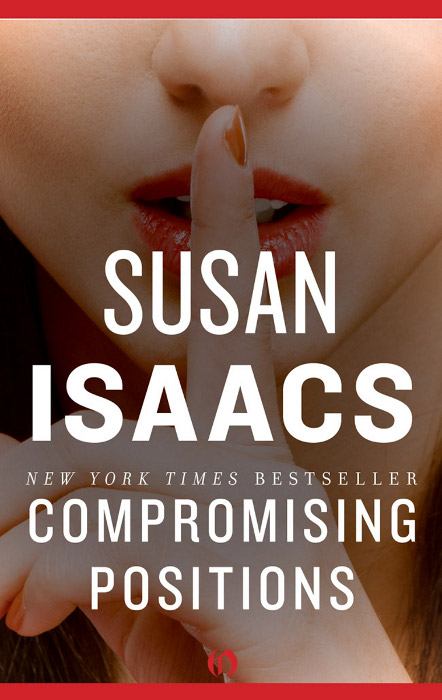 A Biography of Susan Isaacs

the best person in the world

I sought advice and encouragement from the people listed below. They gave it freely and cheerfully. I want to thank them—and to apologize if I may have twisted the facts to fit my fiction.

And a special thanks to my editor, Marcia Magill, for her intelligence, perspicacity, and niceness.

As they would murmur at his funeral, Dr. M. Bruce Fleckstein was one of the finest periodontists on Long Island. And so good-looking. But as he turned his muscular, white-coated back for the last time, he had no notion that he had shot his final wad of Novocaine, probed his ultimate gum. No, he simply turned for an instant, perhaps out of boredom, perhaps to hide the slight smirk that passed over his thin, firm lips. It was an unfortunate turn; his companion seized the moment to withdraw a thin, sharp weapon and plunge it into the base of Fleckstein’s skull.

That was on the evening of Valentine’s Day. My children lay on the floor of the den, watching television, unusually amicable; they were probably too engorged, too leaden, with the day’s excess of Valentine’s confections to raise even a whimper, much less a clenched fist. I sat alone, waiting for my husband, my finger tracing hearts pierced with nonlethal arrows on the frosted window near the kitchen table.

Fleckstein lay on the floor of his office. It must have been quiet there too, for his murderer stayed only ten minutes, taking time to make sure there was no tell-tale twitch of life, to grab a few tissues to wipe off the weapon and to search the office. Of course, even if Fleckstein had been able to give one last shriek of protest, one last howl of dismay, I would not have heard him. His office, Suite 305 in the Shorehaven Colonial Professional Building, was ten minutes from my house, a ten-room Tudor in Shorehaven Acres. Actually, Shorehaven Half-Acres would be more precise, but the developers of Nassau County’s North Shore insist on perpetuating the area’s reputation as the Gold Coast, the Playland of the Robber Barons. So, minutes from F. Scott Fitzgerald’s East Egg, we have Shorehaven Estates, split-levels on sixty by one hundred foot plots; Shorecastle, a red-brick sprawl of upper-middle-income garden apartments on the once-lush grounds of a nineteenth-century railroad tycoon; Shorehaven Mansions, a group of forty colonials, aluminum-sided mini-Taras, competing with a few sparse junipers for a place in the sun.

I learned of Fleckstein’s death about two hours after it happened, as I listened to an all-news radio station broadcasting from Manhattan, thirty miles away.

“We have a report from Duke Gray, our Long Island correspondent,” the voice said. I listened. Bob’s train might be late, the switches might have frozen.

“Yes, Jim,” came a second voice, crackling over the wire like Edward R. Murrow reporting the Battle of Britain. “I’m speaking to you from the suburb of Shorehaven, where a little more than an hour ago, the body of Dr. Marvin Bruce Fleckstein, a dentist, was discovered, brutally murdered, on the floor of his office.” The voice droned on, reporting that there seemed to be no definite leads, but that an official from the Nassau County Police Department would try to issue a statement later in the evening. “And that’s it for now from Shorehaven, Jim.”

“God,” I thought, turning off the radio. “I knew him.” I had seen Fleckstein in line waiting for a movie and at Parents Night at school. I had even consulted with him once, about six months into my pregnancy with Joey. I had been peering into the mirror, studying my face, the only part of my body not bloated, gazing into my slightly almond-shaped eyes, staring at my high cheekbones, mementos, doubtless, of a Mongol invader who had passed through my great-great-grandmother’s
shtetl
en route to besiege Minsk. I smiled at my reflection and saw it: tiny rivulets of blood oozing out of puffy gums. My dentist told me to see a periodontist like Dr. Fleckstein. I did.

He gave me a friendly greeting. “Hi, Judy.”

“Okay, Judith it is.” By that time, I realized I had lost the opportunity to be brilliantly assertive, to establish my adult credentials. I could have said coolly, “Mrs. Singer,” or, better still, “Ms. Singer,” or even “Ms. Bernstein-Singer.” Instead, I sat passively, mouth agape, a napkin resting under my chin, a bib to soak up my infantile dribble. My eyes darted from the word “Castle” on Fleckstein’s adjustable light to his princely, large-featured face. He probed, he scraped with one of those ghastly pointed metal dental picks, stopping at intervals so I could rinse my bloodied mouth with Lavoris and water.

“You haven’t been using unwaxed dental floss, have you?” he asked, although he knew the answer.

“You really should. Do you have a Water Pik?”

“Yes,” I muttered, the draining tube making crude slurping noises in the bottom of my mouth.

“Well, use it. It doesn’t do you any good sitting on the sink, does it, Judith?” He sounded sad and weary, a prophet unheeded by a decadent, self-indulgent people.

“No, I guess not.” I felt humiliated, as I always do with professionals who catch me in my sloppy, unroutinized ways. Periodically, I remind myself that I haven’t taken my vitamin-mineral supplement, that my toe- nails have grown curved and jagged, that another month has passed without a self-examination of my breasts.

But Fleckstein wasn’t too bad. He gave me some medicine for my gums and told me to massage them regularly. Then, looking at my belly, he said: “Good luck.”

“Is this your first?”

“No, my second. We have a three-year-old daughter, Katherine. We call her Kate.”

“Speak to my nurse about it.” He smiled and left the room.

Not exactly an “I-thou” relationship, but sufficient to leave me shaken at the news of his murder. Almost unconsciously, I twisted the knobs of the three doors to the house, front, back, and garage. They were locked. I turned on the outside floodlights. The grass, encrusted with a brittle February frost, was blanketed by a pale, eerie mist, but no crazed killers seemed to be lurking behind the swings or under the denuded rose bushes.

“Kate! Joey!” I called, and waited an uneasy moment until they tramped up the stairs. “Time for bed.”

“Shh,” I hissed, and marched them upstairs to their rooms, where I tenderly smoothed back their hair to kiss their foreheads, tucked them into bed, and half-closed their doors. Then I tiptoed downstairs, accelerating as I moved through the hallway into the kitchen, straight for the telephone.

“Nancy,” I breathed as she answered after five rings. “It’s me.” Nancy MacLaren Miller, whom I’d met fifteen years before in a Colonial American History class at the University of Wisconsin, was one of the best reasons for living in Shorehaven. Her house was about two miles from mine, and I saw her, needed to see her, at least once a week. “Did you hear the news?”

“Apparently not,” she answered, her deep, husky voice thickened by a Georgia drawl, although she hadn’t been back to Valdosta for nearly twenty years. “What happened?”

Taking a deep breath, I recounted what I had heard on the newscast, inhaled again briefly and asked: “Did you know him?”

“My Lord, no. But I’ve heard about him. Anyway, Judith, who could possibly have done it?”

I suggested a junkie, which Nancy rejected as being either unlikely or boring, or an irate patient, whose gums were still bleeding after years of treatment.

“No, no, no,” she insisted. “Look, he was what my mother would have called a bounder. Most likely, it was someone he was fucking.” Southern women, I’ve noticed, can say the most outrageous things, and even the most straight-laced listener will smile wanly, as if to say, “Isn’t she cute?”

“Judith, you wouldn’t recognize it if you fell over it. You think that every guy who talks to you wants to establish a meaningful dialogue.” Her voice rose. “Men do not want dialogues. What do you want them to do? Hang their dickies out of their trousers and wave them at you? Would you understand then?”

“That would be a fair indication,” I conceded. “But listen, Nancy, why would one of his women want to kill him?”

“Maybe he wouldn’t go down on her.”

“She could have stoned him or thrown lye in his face. Don’t you think murder is a little excessive?”

We chatted a few minutes longer. At my urging, Nancy recalled that she had heard rumors linking Fleckstein with a couple of the local ladies, but she couldn’t remember the details. “How do you think his wife will take it?” I mused. “What’s her name?”

“Norma. That’s right.” She had been pointed out to me once or twice, although we had never been introduced. Tall and slender, with short frosted hair brushed back to frame her oblong-shaped face. Not pretty, but aggressively attractive, she was one of those Long Island tough-ladies, brittle and magnificently groomed, wafting a sweet cloud of Norell or Estée. With three or four silver rings on each hand. Dressed in designer jumpsuits unzipped low enough to establish the existence of cleavage, toting an outsize Louis Vuitton handbag or clutching a Gucci under a thin arm. I cannot seem to comprehend the meaning of these flawless women, why they’re here.

Are they divine messengers or mother surrogates, here to remind the rest of us to do our isometrics and polish our nails? Are they the ultimate threat, a warning that if we neglect to slather on body cream and blow-dry our hair every day, our husbands will abandon us and our children will mock us? I eavesdrop on their conversations in restaurants and department stores; they’re consistently discussing clothes, vacations, or who did what to whom, in the most conventional, adulterous, heterosexual manner imaginable. Yet they seem so strange, alien almost.

“I don’t know how she’ll take it,” Nancy said. “But I’ll just bet she’ll open her closet and find the perfect little black dress to wear to the funeral.”

We said goodbye, vowing to call each other if we heard anything new. I sat at the kitchen table, running my finger over the ridges in the polyester tablecloth that was meant to approximate burlap, pondering the fact that the body of a near contemporary—I was thirty-four, Fleckstein couldn’t have been more than six or seven years older—was right then lying on a slab in the police morgue. Why had it happened? Who could have done it?

Then, hearing Bob’s car in the driveway, I leapt up to stick the steak under the broiler. If we sipped our tomato juice slowly enough, the meat would be done before he noticed that the entire dinner was not arrayed before him, steaming and juicy, after he handed me his coat and dashed to the dining room table. I strolled to the front door and opened it, knowing that Bob would still be fumbling with his key ring, as if trying to locate the key to some obscure filing cabinet instead of the one to his house.

Alibi in High Heels by Gemma Halliday
Tip of the Spear by Marie Harte
The Picasso Scam by Stuart Pawson
Loving Her Crazy by Kira Archer
Dirt by Stuart Woods
The Game by Laurie R. King
Pretend With Me (Midnight Society #1) by Jemma Grey
Cavalleria rusticana and Other Stories by GIOVANNI VERGA
SWAINS LOCK (The River Trilogy, book 1) by Edward A. Stabler
Sunny Sweet Is So Not Sorry by Jennifer Ann Mann