Conan the Cimmerian: The Complete Tales of Robert E. Howard 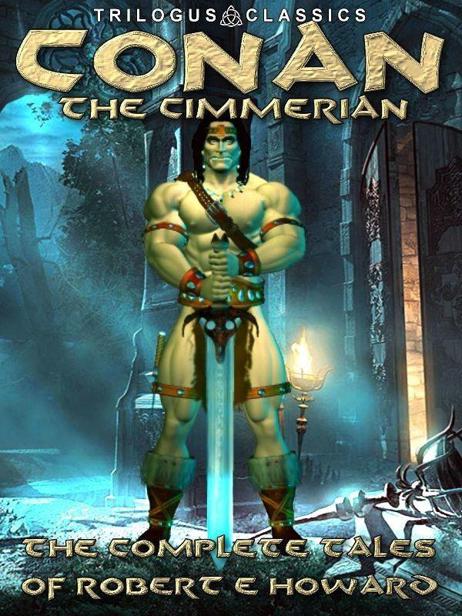 The Phoenix on the Sword

The Tower of the Elephant

The Pool of the Black One

Rogues in the House

Shadows in the Moonlight

Queen of the Black Coast

The Devil in Iron

The People of the Black Circle

A Witch Shall Be Born

The Jewels of Gwahlur

Beyond the Black River

The Hour of the Dragon - Part 1

The Hour of the Dragon - Part 2

"Know, oh prince, that between the years when the oceans drank Atlantis and the gleaming cities, and the years of the rise of the Sons of Aryas, there was an Age undreamed of, when shining kingdoms lay spread across the world like blue mantles beneath the stars–Nemedia, Ophir, Brythunia, Hyperborea, Zamora with its dark-haired women and towers of spider-haunted mystery, Zingara with its chivalry, Koth that bordered on the pastoral lands of Shem, Stygia with its shadow-guarded tombs, Hyrkania whose riders wore steel and silk and gold. But the proudest kingdom of the world was Aquilonia, reigning supreme in the dreaming west. Hither came Conan, the Cimmerian, black-haired, sullen-eyed, sword in hand, a thief, a reaver, a slayer, with gigantic melancholies and gigantic mirth, to tread the jeweled thrones of the Earth under his sandalled feet."

Conan the Commerian: The Complete Tales

This ebook is licensed for your personal enjoyment only. This ebook may not be re-sold or given away to other people. If you would like to share this book with another person, please purchase an additional copy for each person you share it with. If you're reading this book and did not purchase it, or it was not purchased for your use only, then you should return to Smashwords.com and purchase your own copy. Thank you for respecting the author's work.

(Nothing in this article is to be considered as an attempt to advance any theory in opposition to accepted history. It is simply a fictional background for a series of fiction-stories. When I began writing the Conan stories a few years ago, I prepared this 'history' of his age and the peoples of that age, in order to lend him and his sagas a greater aspect of realness. And I found that by adhering to the 'facts' and spirit of that history, in writing the stories, it was easier to visualize (and therefore to present) him as a real flesh-and-blood character rather than a ready-made product. In writing about him and his adventures in the various kingdoms of his Age, I have never violated the 'facts' or spirit of the 'history' here set down, but have followed the lines of that history as closely as the writer of actual historical-fiction follows the lines of actual history. I have used this 'history' as a guide in all the stories in this series that I have written.)

Of that epoch known by the Nemedian chroniclers as the Pre-Cataclysmic Age, little is known except the latter part, and that is veiled in the mists of legendry. Known history begins with the waning of the Pre-Cataclysmic civilization, dominated by the kingdoms of Kamelia, Valusia, Verulia, Grondar, Thule and Commoria. These peoples spoke a similar language, arguing a common origin. There were other kingdoms, equally civilized, but inhabited by different, and apparently older races.

The barbarians of that age were the Picts, who lived on islands far out on the western ocean; the Atlanteans, who dwelt on a small continent between the Pictish Islands and the main, or Thurian Continent; and the Lemurians, who inhabited a chain of large islands in the eastern hemisphere.

There were vast regions of unexplored land. The civilized kingdoms, though enormous in extent, occupied a comparatively small portion of the whole planet. Valusia was the western-most kingdom of the Thurian Continent; Grondar the eastern-most. East of Grondar, whose people were less highly cultured than those of their kindred kingdoms, stretched a wild and barren expanse of deserts. Among the less arid stretches of desert, in the jungles, and among the mountains, lived scattered clans and tribes of primitive savages. Far to the south there was a mysterious civilization, unconnected with the Thurian culture, and apparently pre-human in its nature. On the far-eastern shores of the Continent there lived another race, human, but mysterious and non-Thurian, with which the Lemurians from time to time came in contact. They apparently came from a shadowy and nameless continent lying somewhere east of the Lemurian Islands.

The Thurian civilization was crumbling; their armies were composed largely of barbarian mercenaries. Picts, Atlanteans and Lemurians were their generals, their statesmen, often their kings. Of the bickerings of the kingdoms, and the wars between Valusia and Commoria, as well as the conquests by which the Atlanteans founded a kingdom on the mainland, there were more legends than accurate history.

Then the Cataclysm rocked the world. Atlantis and Lemuria sank, and the Pictish Islands were heaved up to form the mountain peaks of a new continent. Sections of the Thurian Continent vanished under the waves, or sinking, formed great inland lakes and seas. Volcanoes broke forth and terrific earthquakes shook down the shining cities of the empires. Whole nations were blotted out.

The barbarians fared a little better than the civilized races. The inhabitants of the Pictish Islands were destroyed, but a great colony of them, settled among the mountains of Valusia's southern frontier, to serve as a buffer against foreign invasion, was untouched. The Continental kingdom of the Atlanteans likewise escaped the common ruin, and to it came thousands of their tribesmen in ships from the sinking land. Many Lemurians escaped to the eastern coast of the Thurian Continent, which was comparatively untouched. There they were enslaved by the ancient race which already dwelt there, and their history, for thousands of years, is a history of brutal servitude.

In the western part of the Continent, changing conditions created strange forms of plant and animal life. Thick jungles covered the plains, great rivers cut their roads to the sea, wild mountains were heaved up, and lakes covered the ruins of old cities in fertile valleys. To the Continental kingdom of the Atlanteans, from sunken areas, swarmed myriads of beasts and savages–ape-men and apes. Forced to battle continually for their lives, they yet managed to retain vestiges of their former state of highly advanced barbarism. Robbed of metals and ores, they became workers in stone like their distant ancestors, and had attained a real artistic level, when their struggling culture came into contact with the powerful Pictish nation. The Picts had also reverted to flint, but had advanced more rapidly in the matter of population and war-science. They had none of the Atlanteans' artistic nature; they were a ruder, more practical, more prolific race. They left no pictures painted or carved on ivory, as did their enemies, but they left remarkably efficient flint weapons in plenty.

These stone-age kingdoms clashed, and in a series of bloody wars, the outnumbered Atlanteans were hurled back into a state of savagery, and the evolution of the Picts was halted. Five hundred years after the Cataclysm the barbaric kingdoms have vanished. It is now a nation of savages–the Picts–carrying on continual warfare with tribes of savages–the Atlanteans. The Picts had the advantage of numbers and unity, whereas the Atlanteans had fallen into loosely knit clans. That was the west of that day.

In the distant east, cut off from the rest of the world by the heaving up of gigantic mountains and the forming of a chain of vast lakes, the Lemurians are toiling as slaves of their ancient masters. The far south is still veiled in mystery. Untouched by the Cataclysm, its destiny is still pre-human. Of the civilized races of the Thurian Continent, a remnant of one of the non-Valusian nations dwells among the low mountains of the southeast–the Zhemri. Here and there about the world are scattered clans of apish savages, entirely ignorant of the rise and fall of the great civilizations. But in the far north another people are slowly coming into existence.

At the time of the Cataclysm, a band of savages, whose development was not much above that of the Neanderthal, fled to the north to escape destruction. They found the snow-countries inhabited only by a species of ferocious snow-apes–huge shaggy white animals, apparently native to that climate. These they fought and drove beyond the Arctic Circle, to perish, as the savages thought. The latter, then, adapted themselves to their hardy new environment and throve.

After the Pictish-Atlantean wars had destroyed the beginnings of what might have been a new culture, another, lesser cataclysm further altered the appearance of the original continent, left a great inland sea where the chain of lakes had been, to further separate west from east, and the attendant earthquakes, floods and volcanoes completed the ruin of the barbarians which their tribal wars had begun.