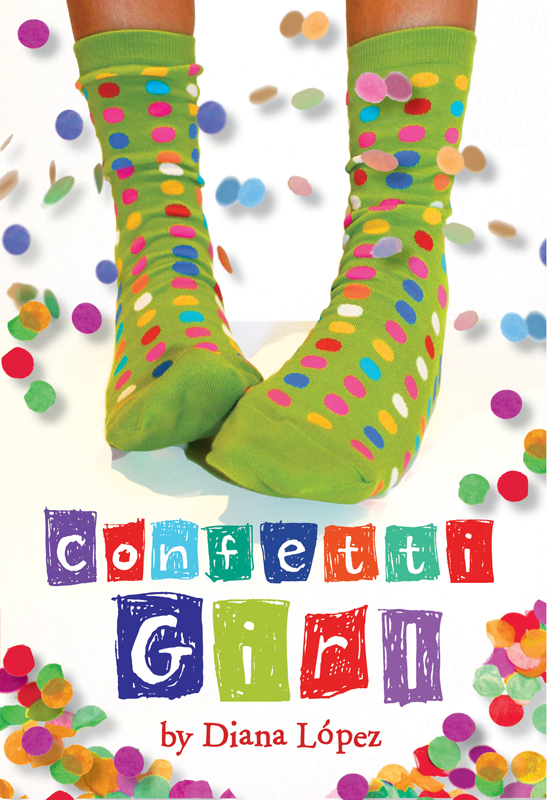 The characters and events portrayed in this book are fictitious. Any similarity to real persons, living or dead, is coincidental
and not intended by the author.

3: Don’t Put Your Eggs in One Basket

5: Vinegar Stinks Up the House

17: Stubborn as a Hard-boiled Egg

23: Don’t Count Your Chickens Before They Hatch

To Mom and Dad

Festive, hollow eggshells, filled with confetti, that are cracked on people’s heads, scattering confetti all over the place
and bringing everyone good luck!

How to Make
Cascarones

The daily drawer helps me get dressed every morning. When I’m bored, I reorganize it. I group the socks by color. Then I group
them by style—dressy, casual, or athletic. Then by length—ankle, crew, or knee-high.

The lonely sock drawer is for those who have lost their partners. Most of the partners disappear in the washing machine or
dryer. I can’t explain it. Somewhere between the tossing and soaking and wringing, one gets lost. I don’t know where it goes.
Maybe aliens abduct it.

Holey socks aren’t for angels. They actually have holes, so I don’t wear them anymore. Sometimes, these socks become puppets
and sometimes they go to sock heaven where they can rest in peace with the socks I’ve outgrown.

But mostly, I use the holey socks for experiments. People who think socks are just for feet have no imagination. For example,
you can cover your ears with socks. Ankle socks make good earmuffs. Knee-highs are great for people who want to be rabbits
or donkeys for Halloween. Then there’s the sock rock. I’ve got a pile of these in a shoe box by my bed. I roll the sock and
make a ball by folding the open end over the roll. Socks are also great as coasters, bookmarks, wallets, and dusters. There’s
no end to what they can do.

I admit that spending so much energy on socks is weird and a little immature, but it’s hard to be normal when you live in
a house with no TV. The reason I don’t have a TV is because my dad’s a high-school English teacher, which means he’d rather
read. And because he’s always reading, I got stuck with a stupid name, Apolonia Flores. The Flores part isn’t so bad since
it means “flowers” in Spanish. But Apolonia?

“It’s the girl form of Apollo,” he says. “He was the god of the sun. Get it? It’s my way of calling you a sunflower.”

But my dad doesn’t hear me.

“According to the Greeks,” he says, “the sun was the golden wheel of a chariot that Apollo drove across the sky. He was also
the god of music, poetry, medicine, and fortune-telling.”

Whenever my dad speaks, I can’t help thinking that he looks like the teachers on Disney Channel specials—graying hair, lean
body, wire-rimmed glasses. He always acts the part, even at home. It makes asking questions dangerous because something that
takes most fathers five minutes to explain, takes mine an hour.

Thank goodness my name is too long, even for my father. Everybody calls me Lina instead. My dad says Lina sounds a lot like
Leda, a girlfriend of Zeus, king of the gods. He disguised himself as a swan when he visited her, so now I’m named after someone
who dated a bird.

Having an English teacher for a dad also means that instead of a dining room, we have a library, and instead of bedrooms,
we have libraries, and we can probably call the kitchen a library too—even the pantry!—because next to my Pop-Tarts and Dad’s
chicharrones
are books.

And they aren’t in any order! The school librarian has the Dewey Decimal system, which makes finding books easy. But at my
house, Dad’s got
Be Your Own Handyman
next to
100 Favorite Love Poems
and
Birds of North America
next to
Tex-Mex Cooking.
So if I’m looking for a book on cats, I’ve got to read every title. This can take hours because Dad doesn’t have a pattern
when he stacks the books. Some titles read top to bottom while others read bottom up, and the titles of horizontal books are
upside down as often as they’re right side up.

Anyone can see the books are used. All the paperback spines are creased, and the hardback jackets, torn. The pages are yellowed,
dog-eared, underlined, highlighted, and tagged with pink or lime green Post-its. Other than that, the books are clean, which
is weird because my dad will forget to dust the coffee table long before he forgets to dust his books. He stands before a
shelf with a rag, pulls out the books one by one, and wipes the dust off. This eats up hours.

“Besides,” Dad says, “I’m a bibliophile.
Biblio,
remember, is the Latin word for ‘book,’ and
phile
is the Greek word for ‘lover.’ Put them together and what do you have?”

“So does that make me a sockio-phile?” I ask.

One day, I tried counting my dad’s books but gave up around 600. I tried again, giving up at 923. I thought I could get my
dad’s name into the book of
Guinness World Records.
I’d been reading it in the car every time Dad drove me to school or to volleyball games. I learned that the farthest human
cannonball flight is 185 feet. If a football field is 300 feet, then imagine a guy flying over two-thirds of it. Wow! I also
learned that the heaviest egg ever found was 27 pounds. More than two ten-pound bowling balls! It came from an elephant bird
that went extinct a long time ago. I don’t know who has the most books, but I did learn that the most books typed backward
is 58. Now that’s weird!

How can I
not
read when I live in a house with so many books? Sometimes I trip over one, pick it up, and before I can stop myself, I’m
skimming the pages.

We have plenty of fairy tales and poems and big, fat books Dad calls epics, but I’m a facts-and-figures kind of girl. My favorite
book is
Gray’s Anatomy.
It’s all about the human body. With my middle-school vocabulary, I can’t really understand all the words, but the pictures
are great, especially the transparencies, clear pages that show the layers of the body starting with the bones, then the heart
and lungs, then the stomach and intestines, then the muscles. I can look at those pictures for hours.

Yes,
Gray’s Anatomy
is a good book. It shows me how the body works. The only thing it can’t tell me is how the body
doesn’t
work. Believe me, I’ve looked. I’ve looked long and hard. Because I want to understand how my mom died last year. She was
healthy, perfectly healthy, until she fell, cut her leg, and got a blood infection from something called staphylococcus. I
didn’t understand it, any of it, but I sure tried.

A few months after the funeral, I asked my dad, “What’s a staphylococcus infection?”

“Well,
m’ija,
” he said with his teacher’s voice, “
staphylo
comes from the Greek word
staphulē,
which means ‘a bunch of grapes.’”

“But that doesn’t make any sense,” I said. “Are you telling me a bunch of grapes hurt Mom?”

M
y dad started reading a lot more when my mom died. Sometimes when I dream about him, I see a body, a neck, and a book where
his face should be.

“Are you okay?” I ask, peeking through his bedroom door.

“‘O, that this too too solid flesh would melt,’” he says.

Sometimes I can’t stand being in the house with my father so sad. Thank goodness Vanessa lives across the street. She’s been
my best friend since forever. We play volleyball together. We do our homework. We talk about clothes, global warming, and
boys.
Ugly Betty
is our hero. Our rule at restaurants is to eat the one thing we’ve never tried even if it’s
tripas,
a Tex-Mex dish made out of cow intestines.

We should be twins after all the time we spend together, and maybe we are twins, personality-wise. But in looks? Except for
our brown hair and eyes, Vanessa and I are as different as a swan and an ostrich. She’s the swan, and I’m the ostrich. I’m
really the ostrich—the tallest girl in class, all legs. Too tall and skinny for my jeans no matter what size I buy. Everything
is high water. That’s why I’m a sockio-phile. I need something to hide my knobby ankles. Today my socks remind me of whitecaps
on the ocean because they’re aqua with white lace around the cuff.

Vanessa doesn’t need a zillion socks. Everything fits perfectly—never too long or too short, too tight or too loose. And she
never has a bad hair day. She could spend thirty minutes in front of a high-speed fan without getting tangles. If she wanted,
she could make a paper sack look like something a model would wear.

I should be jealous, but I’m not. I don’t care about my looks. I care more about volleyball, geometry, and how toasters and
lawn mowers work. But, I admit, when Jason Quintanilla called me Daddy Longlegs, I went to the girls’ restroom to cry. Not
because I care what Jason thinks, even if he
is
the most popular boy in school, but because he called me Daddy Longlegs in front of Luís Mendoza, someone I
do
care about. Luís didn’t laugh at the joke, but he didn’t defend me either. He just stared at the sundial he wears on his
wrist. I have such a big crush on him. How can I
not
like someone with a sundial instead of a normal watch? And he really can tell time when it’s not rainy and cloudy, and that’s
almost always in Corpus Christi, Texas.

Unbridled and Unsaddled [The Double Rider Men's Club 9] (Siren Publishing Ménage Everlasting) by Elle Saint James
Gamer Girl by Mari Mancusi
The Outsider by Colin Wilson
Love's Sacrifice by Ancelli
Bad Grace (Watcher Chronicles Book 1) by N.P. Martin
A Little Trouble with the Facts by Nina Siegal
More Than Magic by Donna June Cooper
Affairs of the Dead by A.J. Locke
It's Always The Pretty Ones by Howard, Vonda
The Queen and I by Russell Andresen