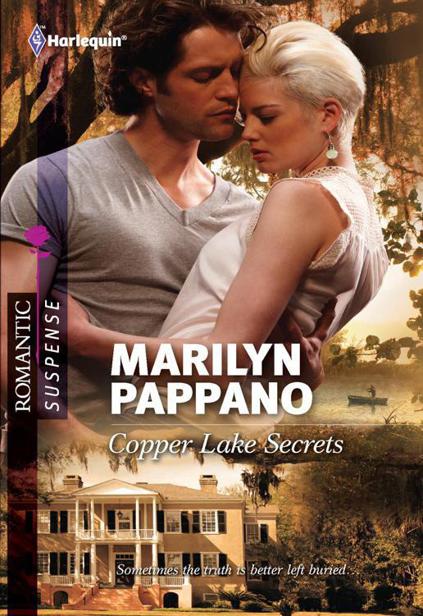 Get back in the house!

And the tiny voice inside her, echoing nearly as loud as Grandfather’s roar:
Run, run, run!

Heart thudding, vision blurring, she spun around and dashed away. Dimly, she heard a dog bark, a man shout, but she didn’t slow. Her arms swung, her legs were pumping, her strides were closing the distance, but, God, not fast enough.

He caught her, arms wrapping around her, holding her close. His breathing was loud in her ears, his voice unfamiliar as he murmured, “It’s okay, Reece, it’s okay. Just an old memory. It can’t hurt you. They can’t hurt you. It’s just you and me and Mick. You’re safe.”

She inhaled sharply, intending to scream, but the scents caught in her nose: soap, shampoo, cologne, dog. She knew those scents. She trusted them.

Pivoting, she wrapped her arms around his neck and held on as if only he could chase away the fear, the ghosts, the memories. Only he could make her feel safe.

She held on for dear life.

I’ve always liked things that go bump in the night—in theory, at least. I don’t like to be scared in real life, though having someone like Jones to hold on to could make the shivers more fun.

Jones is the kind of guy who could make everything better. He’s the sort who falls fast and hard; once he gives his trust, it’s
given;
and he’s kind to crotchety old women and needy puppies. He couldn’t possibly be any more perfect for Reece!

The Princess and the Mercenary
#1130

has spent most of her life growing into the person she was meant to be, but isn’t there yet. She’s been blessed by family—her husband, their son, his lovely wife and a grandson who is almost certainly the most beautiful and talented baby in the world—and friends, along with a writing career that’s made her one of the luckiest people around. Her passions, besides those already listed, include the pack of wild dogs who make their home in her house, fighting the good fight against the weeds that make up her yard, killing the creepy-crawlies that slither out of those weeds and, of course, anything having to do with books.

To my husband, Robert, who is also kind to crotchety
old women and needy puppies. (Even if they do have
you wrapped around their pinkies.)

Counting in her head, Reece Howard moved thirty-eight steps along the ancient brick wall, then counted out another six before reaching the gate recessed into the wall. She counted a lot, but only steps. She’d done it for as long as she could remember—which was only fifteen years with any clarity, a little more than half her life—but who knew why? Maybe she was obsessive-compulsive with that lone manifestation. Maybe she was just freaking nuts. Maybe, her boss suggested—teasingly?—she simply liked numbers.

If that was the case, then she must
really
like the number thirty-eight. That was as high as she went. No more, no less.

It was a warm October afternoon, and Evie Murphy was keeping her regular appointments in the courtyard of her French Quarter home. Evie was many things to Reece: friend, confidante, counselor, advisor. Officially her title was psychic, and she was very good at what she did, but even her talents had limits.

Evie was waiting at a wrought-iron table and chairs near the fountain. Playing in the grass a few feet away were Jackson, her four-year-old son, and Isabella, her two-year-old daughter. Eight-month-old Evangeline was asleep on a quilt in the nearby shade.

“Aunt Reece!” Jackson flashed her a wicked smile, the very image of his father, and Isabella wandered over, looking around with anticipation. “Puppies?”

“I had to leave the puppies at home today, sweetie. Next time I’ll bring them, okay?” Reece slid into the chair across from Evie, who was looking calm and serene and beautiful. Not in the least like the dark, mysterious “Evangelina” who told fortunes for tourists in the shop that fronted the house.

A lot of people asked the question, Reece reflected, but few put the sincerity and interest in it that Evie did. She was the only one Reece answered honestly. “Terrible. I had the dream again last night. I woke up soaked in sweat with all three dogs staring at me as if I were possessed. And I didn’t remember a thing except that it had to do with my time at that place.”

She’d used the same words in a recent conversation with her mother, who’d scoffed.
Your time in that place? You spent four months with your grandparents in a beautiful Southern mansion, and you make it sound as if you were incarcerated. Really, Clarice.

“Your dreams got worse when your grandfather died. Maybe he’s sending you a message.”

Evie’s gaze steadied on her face. “Why would you think that?”

Good question. Why
would
she think that Arthur Howard wanted her dead? Besides those months she’d spent in his house, she hardly knew the man. When she tried to picture him, she couldn’t bring his face to mind but only images: large, hulking, menacing. And numbers:
one, two, three, four…

“Damned if I know,” she replied to Evie’s question. “I look at pictures of him, and it’s as if I’ve never seen him before. He’s just this blank in my memory.” A large, menacing blank.

“You have a lot of blanks in your memory.” Evie touched her, her hand warm and grounding. “How many people know what happened that summer, Reece? Three? Maybe four? Your grandfather’s death made it one less. If you ever want answers…”

They’d had the conversation before, but the idea of returning to Copper Lake, Georgia, to the Howard ancestral home on the Gullah River, tied her stomach into knots. Maybe she didn’t really want to know. Her mother was convinced that the best thing she could do was forget the past and move on in the present.

Of course, her mother—Valerie—wasn’t the one missing three months of her life, or facing the nightmares, or so full of resentment and distrust that every potential relationship became a burden too cumbersome to manage. Reece was twenty-eight years old, and her only real friends were Evie and Martine Broussard, her boss, and they made it easy for her. They didn’t ask for too much; they understood her as much as anyone could.

Much as she loved them, she wanted more. She didn’t have grand dreams, but she wanted to fall in love, get married and have children. She would like to make a difference in someone’s life, the way her father had made a difference in hers. She would like to be a part of something special, something she’d had in the years before Dad’s death had taken it from her: a family.

She wanted, she would like…she
needed.
Answers.

“Ah, Evie, I swore I’d never go back there again.”

“I didn’t even go back for Grandfather’s funeral.”

Evie echoed the words Reece had only thought earlier. “You hardly knew the man.”

Reece offered her last feeble excuse. “I have to work.”

“As if Martine wouldn’t let you off at a moment’s notice.”

Tension knotted in her gut. All these years, her refusal to return to Fair Winds had been a source of anger, frustration and more than a few arguments, but it had been a constant. Valerie had wanted to spend Christmases there; Reece had refused to go. Grandmother had invited them to Mark’s wedding; Reece said no. Grandfather had unbent enough to ask her personally to attend Grandmother’s seventy-fifth birthday celebration. Reece had stood her ground.

Valerie thought she was childish and melodramatic—ironic insults coming from the woman who embodied both. Grandmother thought she was stubborn and selfish. And Grandfather had told her that her father would be ashamed of her.

Not as much as he would be of you,
she’d retorted before slamming down the phone. She believed that wholeheartedly. She just didn’t know why.

She was tired of not knowing.

Across the table, Evie was waiting patiently. If some thing bad would come of a trip to Georgia, surely she would sense it. She warned people of danger; she helped them make the right decisions. If she thought Reece should go…

“And leave Jack alone with the kids? His idea of day care would be sticking them in a holding cell while he interviewed suspects.” She squeezed Reece’s fingers. “You can call me anytime day or night, and if you need me, I’ll come.”