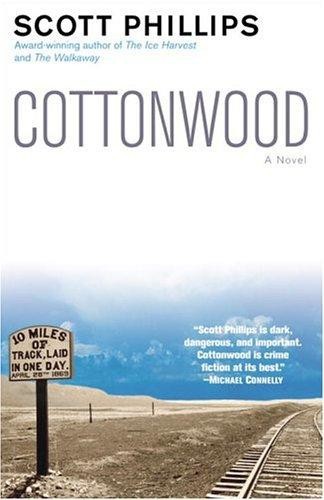 “Gunfights and murders, lynchings and thefts . . . It is Western-noir with a touch of the gothic.”

“Phillips takes the reader on a witty ride into a sometimes humorous, sometimes grotesque version of life on the Kansas prairie.”

“In a book that is as much history as mystery, Scott Phillips makes the dirt streets and rough life of the Kansas prairie come alive.”

“[Phillips] not only has hit the literary equivalent of three homers in a row with his first three novels, but each one has been a grand slam.”

“A step back in time and forward in momentum.”

To Anne and Claire, again,
with all my love

There was no visible sign the day had broken when I poked my head out of the warm, dark pocket of my buffalo robe and into the stinging air of the blacksmith’s loft where I made my bed. Up the street, though, I could hear a wagon rolling over the uneven ground, its driver cursing his team, the dry hinges of the big doors of the livery as they swung open, banging as they glided over the occasional chunk of frozen mud, someone idiotically ringing the bell that hung from a post in front of the Cottonwood Hotel. Ordinarily by this hour the blacksmith’s boisterous activity would have awakened me, but he appeared to be late in arriving, so I rose shivering from the straw, stretched and pulled on trousers and shirt and then, clutching the robe about me, climbed down from the loft.

I started the smith’s fire for him and stood before it for a minute or two, until I felt able to haul on my boots and overcoat and step out the door. Unlatching the padlock I walked one of the big square doors outward and found the day scarcely any brighter than when I’d closed my eyes the night before, the sky like cold ash and threatening snow. I couldn’t leave the fire unattended and was about to douse it when the blacksmith showed himself, wheezing and spitting chunks of milky phlegm onto the rock-hard ground.

“Morning, Bill. See you got the fire going.”

“Nope.” His enormous, grizzled mustache and the narrow patch of wavy black beard under his lower lip were encrusted with frozen saliva and worse.

“You ought to be home in bed.”

He made a horrible noise in his throat, that of half-solid matter being reluctantly dislodged, and spat into the fire, appearing to take some comfort in watching the stuff spatter and shrink therein. “The hell I ought. I got work to be done.” Otis’s apprentice, an industrious and formerly reliable young man of eighteen or nineteen by the name of Perkey, had gone off two months earlier to visit his ailing, widowed mother in the town of Lawrence and failed to return, and now it was all poor Otis could do to keep the livery supplied with horseshoes.

“All right, then. Stop in after lunch and get yourself a shot on the house.”

He grunted his assent and began fortifying the small blaze I’d started, and I walked off stiff-legged up the street to the hotel, where six other men, laborers sharing a room, sat at the main table of the dining room. There I got a tin cup of coffee like axle grease and horseshit along with a plate of biscuits, and set about eating them as quickly as I could.

“Where’ve you been sleeping, Bill, to get your hair all afright like that?” The serving girl touched her hand to my hair, which must have been considerably askew. I pushed the hand away without a word or a direct look. “I believe I’ll get you a comb for Christmas, ” she said as she headed out of the tiny dining room with a jaunty wiggle of her hind end, her long, wavy dark red hair shaking to the rhythm of her teasing laugh.

Two or three of the others at the table laughed with her. “Appears Miss Katie’s taken a shine to old Bill,” Tim Niedel said, his voice slow and high-pitched, his face wrinkled and flushed. This time of year his face was plain white and went bright pink when he laughed or got sore, but in the summertime he burned so brown even with a straw hat on that only his red hair kept him from being taken for an Indian. Tim had helped me build the saloon a year and a half previous, and when he had cash he was a customer there as well; he and the others were currently at work on a new house of such scale and ostentation that it seemed to belong in another town entirely. Its owners were as yet absentees and known only to the foreman of the project; there was speculation that their decision to locate their house in Cottonwood had been prematurely made, that once they actually saw our underdeveloped little settlement they’d dismantle the thing for reassembly in the more civilized climes of Independence or Fort Scott, or even Wichita.

“She takes a shine to anyone’s possessed of a cock and balls, Tim,” his neighbor answered in a lovely baritone that could be heard bellowing hymns on Sundays at Methodist services in the meeting hall down the street. Though she didn’t live in town, the woman under discussion often attended those services herself; as neither man had troubled to lower his tone, she must have heard their remarks.

When she came back in she was still grinning, and she flicked a dishrag at Tim Niedel’s head and then at his chum’s. The other four seemed not to know anyone was in the room with them, so intent were they on shoveling down their corn mush. I gave Katie her dime and a half and went out, ignoring her efforts to get me properly bundled before I got out the door. It wasn’t that I wanted to step out into the punishing morning air with my coat undone; I just didn’t want her hands on me, and I couldn’t have said exactly why.

On the wall next to the door of the hotel I saw that the proprietors had allowed her to post a fresh copy of her flyer:

PROF. MISS KATIE BENDER CAN HEAL ALL SORTS OF DISEASES; CAN CURE BLINDNESS, FITS, DEAFNESS AND ALL SUCH DISEASES, ALSO DEAF AND DUMBNESS.
RESIDENCE, 14 MILES EAST OF INDEPENDENCE, ON THE ROAD FROM INDEPENDENCE TO OSAGE MISSION ONE AND ONE HALF MILES SOUTH EAST OF NORAHEAD STATION.Katie Bender
June 18, 1872

Beneath the printing she had scrawled APPLY WITHIN. Katie’s sporadic attendance at Christian services hadn’t affected her primary vocation as a spirit guide and faith healer, which for a while had earned her something of a following in Cottonwood and the surrounding towns. I hadn’t heard much about it of late, probably since her clientele hadn’t notably prospered or healed or become lucky in love.

There wasn’t time to ponder the question, though; even in the midst of winter there were things that needed doing every morning, and that time of year I only kept one hired man. I mounted my rheumatic old nag and rode the three miles out to my claim thinking about the day when the income from the saloon would allow me to hire more and be done with farmwork forever.

Because of my delayed start it was late morning, though the sky was still dark, by the time I got to the saloon, where I found old Alf Cletus and Clark Bingham huddled around the side of the building against the wind and waiting for me to open her up. I lit both oil lamps once I’d closed the door and still it looked like the dead of night in there, just a smidgen of illumination coming in through the window opposite the bar as I fired up the stove and put on my vest and necktie.

When Alf removed his hat the skin at the crown of his head was high pink from the cold; he was ill dressed as usual and still shivering as the stove began warming the place up, complaining bitterly about my irregular hours of operation. His griping ceased when I set a glass in front of him and poured. Clark, quiet as usual, was fresh off of losing the homestead he’d staked eight months earlier, having failed to make the initial improvements necessary to maintain his claim. Despite my repeated arguments that he was better off, he was unable to see the happy side of this; he believed that he had been born to farm that piece of land, drunk or not. They had both downed their first shots of the day when the door opened and a man walked in wearing a fur coat and bowler hat. He had a drummer’s sample case in his right hand, and with a cursory greeting to the assembled he shut the door and set the case down on the floor before the bar.

Alf had been just about to buy a bottle to take back to his room, but the drummer offered to stand him and Clark to a round of drinks, doubtless expecting that the gesture would be reciprocated by at least one of the two, an impression I didn’t bother to correct.

“I presume you’ll be able to change this?” He held out a gold double eagle, yellow as the mustache that curled over his upper lip.

“I can,” I said, though I was certain he had smaller. The other two looked longingly at the gold piece; like just about everybody else they paid for their whiskey with whatever small coins and ten-cent shinplasters they managed to get their hands on. It had probably been years since Alf or Clark had held twenty dollars at one time in any form.

“Pleasant little hamlet you fellows have here,” the drummer said, having established that Alf and Clark were locals. They both nodded in silent agreement.

“What are you peddling?” I asked, just to keep the conversation going in case he felt like going for another round.

“Pots and pans, the finest available in these United States.” He said it with gusto and quite a bit of wind, probably thinking he might make a sale.

“Shit,” Alf said, a gob of tobacco spittle flying from beneath his mustache and into the spitoon at his feet, “old Otis down at the forge makes all the pots and pans anybody needs around here.”

“Not lately he don’t,” Clark mumbled, as if to himself.

“These are copper,” the drummer said. “I just took a large order from the local hotel.”

“Is that the truth?” I said, suspecting it wasn’t; there wasn’t much call for fine copperware in this part of the world. “Must be interesting work. Meet lots of people.”

“Most of my clientele is made up of ladies,” he said. He leaned in. “That’s got its advantages and disadvantages, naturally. The former outweighing the latter.” He winked and leered.

“How’s that?” I said, playing innocent. He was thirty or thereabouts, and clearly hoped to cut the figure of a dandy. But if the bowler on his head looked brand-new and expensive, his coat’s fur was worn away altogether in patches about the pockets and buttons, and when he opened it up, the suit under it was of medium quality, and threadbare to boot.