Read Counting On It (Hearts for Ransom Book 1) Online

Counting On It (Hearts for Ransom Book 1) 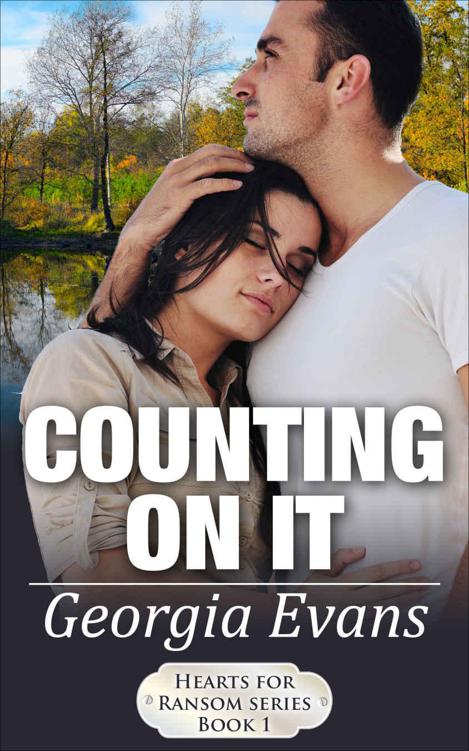 Also by Georgia A Evans

This book is dedicated to my sister, Barbie Wheeler. She is the most dedicated nurse I know, but somehow still finds the laughter behind the pain and tears.

Also to my niece Emily, for the use of her name—she is every bit as beautiful as the character in this book.

Emily Scott sighed. The group at campsite seventy-four was still gathered around the huge television built into the side of the large motor home, and they were making way too much noise. It was ten-thirty—half an hour past quiet time.

It was her job as campground host to make sure all the rules were followed. There weren’t really that many. Fires could only be built in the concrete and steel pits at each site. Pets had to be kept inside, or on leashes. The speed limit of a whopping five miles per hour had to be adhered to. And so that those who came for a quiet, relaxing experience could go to sleep at a decent hour, people who decided to remain out and about had to keep the noise down, beginning at ten o’clock.

She had wondered if they were going to be a problem when she stopped by the site and collected their fees. There were actually three motor homes occupying sites seventy-three through seventy-five, but the folks from all three of them seemed to have congregated in front of the television.

As she walked the one hundred or so yards from her site to theirs, she mentally stiffened her spine and readied herself to sound authoritative. At not quite five-six and of slender build, the twenty-five-year-old wouldn’t be surprised if the campers gave her trouble when she had to “remind” them of the rule they were breaking.

Since she had been halfway expecting something like this, she hadn’t taken her long brown hair out of its ponytail, nor had she changed out of her jeans and pink “Boone’s Sites” T-shirt.

She would try and make as much noise as possible to let them know they were about to have a visitor, but they had that blasted television so loud she could yodel—if she knew how—and they wouldn’t hear her.

As she drew closer, she counted them. Nine—and they were all men. What were they watching? The images looked disgusting. She was horrified when she realized they were actually playing one of those video games that made it appear as if the players were shooting each other. From the way all of them were carrying on, it was impossible for her to determine who was playing, and who was just cheering them on.

How would she get their attention? Emily knew she was tired when the urge to strip down and run across the site between them and the television came upon her. Thankfully, it passed.

“Excuse me.” She spoke as loudly as she could. When there was not so much as a glance in her direction, she yelled at the top of her lungs, “Excuse me!”

One man turned his head just far enough to see her. He said something to the guys on both sides of him and word of her presence was passed on until finally, thank heavens, whoever was playing the nauseating game paused it. She suddenly realized she was now the center of attention. All nine men were turned just far enough in their chairs to see her. Should she do a quick little tap dance? She was way too tired for this.

“I’m sorry, but Boone’s Sites has a ten o’clock curfew for excessive noise. The rule is on the receipt I gave you when you paid your fees.” Motionless, they stared at her. Had that game turned them into a bunch of mindless zombies? “I don’t know whether you didn’t realize it’s already ten-thirty or just don’t care, but you have to quiet down. There are people all around you trying to sleep.”

Thankfully, she hadn’t found it necessary to enforce this rule yet. If they refused to comply, though, she’d have to go back to her site and call Aaron Boone, the owner of the campground. Since his wife Sara had just gotten home from the hospital, he wouldn’t appreciate his phone ringing at this time of the night.

“Is that you, Scott?” an all-too-familiar voice asked.

“You know it’s me,” she angrily retorted, her gaze finally zeroing in on Logan Taylor. Great. Logan Taylor—the bane of her existence since…since just about as long as she could remember. They had gone all the way through school together, and his sole purpose in life had seemed to be making her miserable. She hadn’t attended her five-year class reunion two years ago simply because she knew he was bound to be there.

“So you’re still a party pooper, huh? Now it’s just official.” He looked at his friends. “Miss Goody-Two-Shoes Scott has always been a stickler for rules.”

What was he? Five? “Look, Mr. Taylor, if you have to call me names to bolster your obviously low self-esteem, I really can’t do anything about that.” She stared him down, her lifelong frustration with this person giving her courage. “I can, however, call the owner, who will be happy to watch you load all of your,” she wrinkled her nose at the electronics scattered around, “paraphernalia, and leave this campground. It’s your choice, but I personally think it would be much easier if you turn off your—game—and keep your voices down.”

Why did Emily Scott always have this effect on him? Logan couldn’t remember a time when he hadn’t wanted to break through that wall of perfection she had erected around herself. Nobody could be as…
good
…as she always was. When they had been in school at Ransom, an Indiana city halfway between Evansville and the Illinois state line, if something was done right, there she was. Give Emily Scott the credit. If there was trouble, though, find Logan Taylor. It was for sure he was involved in it somehow. Maybe it was just the case of a “bad boy” feeling the need to knock the “good girl” off her throne.

Nobody could accuse her of cowardice, though. As small as she was, there she stood, fearlessly facing all nine of the starters for Sloopy’s Slammers, the best fast-pitch softball team in the state.

Mason Wright, Logan’s top employee and good pal, had the usual predatory gleam in his eyes. Emily didn’t know it, but she had just placed herself in the sights of a self-proclaimed womanizer of monstrous proportions. As much as she rubbed Logan the wrong way, he couldn’t stand idly by while his friend went after her. She was undoubtedly too naïve and inexperienced to recognize Mason for what he was. She’d expect him to pledge his undying love when, in fact, he’d be out the door in a New York minute once he got what he wanted.

So that explained why his next comment probably shocked himself more than it did her. “You heard her, guys. We know the rules. She’s just doing her job.” His brown eyes focused on Emily. “We’ll shut it down and call it a night.”

Mason put the game controller down and stood up, his intent to approach her obvious.

“Wright, this is your equipment. None of us ever put it back the way you want it.” Logan stood up and placed his six-foot-one, two hundred pounds-plus frame between his buddy and the clueless woman. The slightly shorter but stockier man gave Logan an assessing look before he silently turned and picked the controller back up.

Emily was shocked speechless. “Thank you,” she finally managed to say. As the men stood and quietly started clearing their things, she turned and walked back to her site. That group of men—very large men—had listened to her, but only after Logan Taylor, of all people, had supported her. She glanced overhead, half expecting to see stars plummeting to the earth, for surely the world was ending tonight. Logan Taylor had done something nice for her.

She looked back and saw that there was only one man left outside. He closed the door that encased the television in its space and was walking to the door of the motor home when Emily turned back toward her own camper.

It was actually her parents’ motor home, and this was actually their job. Mike and Barb Scott had asked for just one gift from their only child for their thirty-fifth wedding anniversary. They wanted her to take a much-needed leave of absence from her stressful job as an emergency room nurse, and let them take an extended vacation with friends. There she was, acting as campground host for two whole months while her parents lived a life of luxury aboard a privately owned yacht sailing in the Caribbean. Emily had only been there for two weeks, and already wished they had just settled for a gift certificate to a nice restaurant.

She went to the bedroom in the large motor home and found her pajamas. It had been a long day, and since she now knew Logan Taylor was camping at Boone’s, she couldn’t help but dread the next one.

After she showered and was lying in bed, even though she tried not to, she couldn’t help but remember how difficult Logan had always tried to make it for her in school. Heck, it had started in kindergarten when he pulled her hair and then got mad at her for telling the teacher. Maybe that was it. Tattling on him in kindergarten had been the catalyst for him driving her crazy during the next twelve years. She was still mulling the ridiculous thought over as she drifted off to sleep.

Black Friday by Alex Kava
7 Days of Rice - Rice Cooker Recipes by Andy Cowan
The Doctor Claims His Bride by Fiona Lowe
Butterfly Weed by Harington, Donald
It's Always The Pretty Ones by Howard, Vonda
A Spool of Blue Thread by Anne Tyler
Vaporware by Richard Dansky
Origins (Remote) by Drouant, Eric
The Dark Beyond the Stars : A Novel by Frank M. Robinson
The Lieutenant's Promise by Aileen Fish