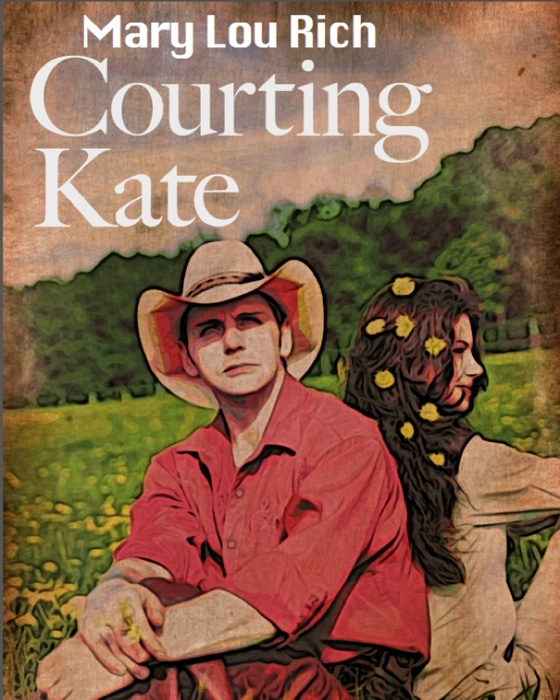 Published 2013 by The Fiction Works

All rights reserved. No part of this book may be reproduced without written permission, except for brief quotations to books and critical reviews. This story is a work of fiction. Characters and events are the product of the author’s imagination. Any resemblance to persons, living or dead, is purely coincidental.

Only a fool would risk his life to fell one last tree. Tanner Blaine didn’t consider himself a fool, but he was that desperate. A cold rain saturated his clothing, ran off the brim of his hat and trailed down the back of his neck, making him shiver. He’d hoped the weather would hold until he had finished for the day. He hadn’t been that lucky.

The late September storm lashing the tops of two-hundred-foot firs made them creak and moan like souls in torment. In the thick forest below, Tanner held his falling ax and eyed the frenzied branches warily. Icy drops stung his cheeks and blurred his vision. He impatiently wiped them away. Weather be damned, he had to work. Last winter he had quit too soon. Now, as a result, he had a mortgage at the bank.

He thought he had his problems solved when he signed a contract with the Lucky Strike mine to supply timber for their flumes. Now he wasn’t so sure. He needed that money to pay the bank and get him and his four younger brothers through another winter—if the blasted weather would allow him to get the trees cut and off the mountain by the deadline. If not, he would forfeit everything, the trees he had cut and the mountain he and his brothers called home.

Determined not to let that happen, he clenched his jaw and planted his feet more firmly on the springboard, an eight inch wedge of wood driven into the tree trunk some twelve feet above the ground. He tightened his grip on the long, slippery ax handle and drove the blade deep into the tree.

He sucked in air made sharp with the scent of wet wool, rotting leaves and pitchy wood, then, muscles flexed, he swung again. A few more cuts and the tree would fall. Then, and only then, could he quit for the day.

A chill raced up his spine. He froze, his gaze shooting upward. Fear quickened his heartbeat and sent blood rushing in his ears.

He knew that sound. For good reason, the loggers called it a widowmaker—a dead treetop or limb that can break free from the force of ax blows on the trunk and fall on an unwary woodsman. Four years ago, one had killed his own father.

He squinted, but a thick gray mist tangling in the treetops made it impossible to see. The sound could have come from the dead snag two trees away. Or it could have come from the tree he was cutting. He hesitated, his better judgment telling him to get away and let the fir fall where it may. But in this wind, it could come down in the wrong direction, or worse, hit other trees and snap in half. Then he wouldn’t be able to use it. He couldn’t take that chance.

Grimly, he hoisted the ax and drove it into the wood.

The thousand-year-old monarch trembled. Two cuts later, it sighed, giving up the struggle for life.

Tanner tossed his ax into the brush, then gathered his legs beneath him, ready to hurtle from the springboard. A sound made him glance up.

A long, thick limb plummeted toward him—and the spot he had picked for his landing.

“Damnation!” He twisted to one side and threw himself into the brush, hoping he wouldn’t land on the ax.

The limb whooshed by, grazing his cheek. It snagged his shirt, ripping off the sleeve.

The branch and the tree both crashed to the ground. Pine needles and wood chips exploded with the impact.

As the debris settled to earth, Tanner lifted his face to the falling rain and gave thanks that he had been spared. Shaking from his brush with death, he rolled to his feet and retrieved his ax. His arm stung. He rubbed the spot and felt something warm and sticky ooze over his fingers. Blood, turning pink as it mingled with the rain. The cut was deep, but it could have been worse. He could have lost his arm. Or his life.

He stared at the deadfall and shivered. Twice he’d been spared. At least this time, no one else had died. Guilt and sorrow riding heavy on his shoulders, he wrapped the tattered remains of his sleeve around the injury, picked up his tools and headed for his mules.

The pack animals and his gelding huddled together, tails to the wind, their coats dark with rain. For once the ornery mules gave him no problem, and it took little time to secure the tools and tie the packs. He figured the animals, too, would probably be glad to get home and out of the weather.

His own teeth chattering, clothes dripping wet, Tanner slid into his mackinaw jacket and topped it with a slicker. Then he mounted his horse, picked up the lead rope and started down the trail.

During the long trek home, Tanner’s thoughts drifted back to earlier times. Times when they’d all been happy.

He couldn’t remember his mother. He’d been told that she had been of Cherokee descent and had died when he was barely two. Soon after that his pa had left Kentucky and traveled to Oregon.

Instead of settling in the rich Rogue basin, Henry Blaine had chosen the high mountain valley in which to build a one-room log cabin for himself and his son. Folks below hadn’t understood, but being a solitary man like his father, Tanner knew his pa had loved the isolation and the beauty. He couldn’t imagine living anywhere else.

He’d been eight when his pa had married Maggie, an Irish lass who had taken to Tanner like he was her own. Over time, as the boys had been born, the cabin had been expanded, and while the place made no claim to being fancy, it suited all of them just fine. Growing up, they had been a rowdy bunch, and Tanner and his brothers had made the rafters ring with their laughter and their squabbles. But his pa had built the dwelling sturdy enough to last for generations, provided a wildfire didn’t take it before its time.

Then, six years ago, Maggie had died in a diphtheria epidemic. Two years after that, the deadfall claimed their pa. Tanner had taken on the raising of his brothers, but the burden—and the responsibility—weighed heavy on his shoulders. Now, after losing both their parents, the mountain was all they had left. He would never allow them to lose it.

The rain had turned to sleet by the time he rounded the last switchback and crossed the creek. Beyond a large meadow, a welcoming beacon of light shone through the cabin window. Smoke, curling from the chimney, drifted on the wet air.

Pausing to rest the animals, he gazed past the house to the north side of the valley where a towering peak stood like a sentinel, sheltering the homestead from the deepest winter snows and bitter winds. Evergreens, surrounding a large meadow, shielded the place on the other three sides. In summer, that glen waved as an undulating sea of green grasses and wildflowers. Deer, elk and other wildlife roamed in abundance. Flocks of ducks and geese chose the quiet eddies of the creek in which to raise their young.

A short distance from the cabin, at the edge of the woods, he and his father had built a barn. Next to that a smoke house held their winter’s meat.

The place had everything a man needed, and Tanner knew if he looked his whole life, he couldn’t find anywhere he would like better.

The gelding stomped restlessly, eager to get to his stall. Giving him his head, Tanner rode past the house, waving at eight-year-old John, who peered through the window, then hurried the mules on into the barn. Although he longed to dry himself in front of the fire and fill his belly with something hot for a change, his animals had to be cared for first. Then his tools had to be wiped down and oiled in preparation for the next day’s work. It was pitch dark by the time he finished his chores.

He lifted the lantern from the hook and was leaving the barn when a gleam of white in a pile of hay caught his eye. Eggs. A whole pile of them. He’d wanted some for breakfast, but he hadn’t gotten any. The boys had told him the hens had quit laying. Now he saw they had been too lazy to gather them.

Wondering what other chores still needed doing, he stuffed the eggs into his pocket then trudged through the rain toward the warmth of the house.

“Are you announcing my arrival, or warning them I’m coming?” “Both, I r-reckon,” John said, his blue eyes dancing.

Tanner reached out with his free hand and ruffled the child’s blond hair. Shy little John was skinny as a stick and stuttered so bad you wanted to pull the words out of him, but he had a sunny disposition, something Tanner had never laid claim to.

It wasn’t that Tanner intended to be grumpy, but it always seemed to end that way. With all he had to do, he had little time and no patience for more frivolous things.

His eyes narrowing, he took in his other brothers, Matthew, Mark and Luke, who sat warm and dry in front of the fireplace. Lean and lanky, Matthew stood six-foot-three, the same height as Tanner. But even though Matt looked like a man, he was only sixteen. Most of the time he acted even younger.

Mark, fifteen, was half a foot shorter, a fact that irritated him. He was the handsomest—and most enterprising—of the bunch, with his dark hair, dimpled grin and dancing blue eyes.

Six feet tall at fourteen years old, Luke ad grown to long legs, big hands, and even bigger feet. He couldn’t take a step without falling over something. With his wild thatch of white-blond hair, he resembled a scarecrow who had outgrown his clothes.

“Clean your feet,” Luke yelled out.

Tanner wiped the worst of the red mud from his boots on to a burlap sack by the doorway, then striding into the living room, he reached into his pocket and brought out an egg. “I found a pile of these in the barn. I take it none of you bothered to look for them.”

“Dandy, just dandy.” Matthew glanced up, a strand of shaggy red-blond hair clinging to the peach fuzz on his cheek. “You walk in the door, and already you’re chewing at us.” Scowling, he bit off a length of sewing thread, fed it through his needle, then bent toward the britches he was attempting to mend.

Tanner shot him a disgusted look, then went into the kitchen to unload his pockets. His stomach growled. He was so hungry he could eat one of the mules—hooves, hide and all. He sniffed, then glanced toward the cookstove. No skillets sizzling, no kettles steaming. Nothing. Then he saw a pile of raw meat sitting on the counter. “Matt, what have you been doing? Get in here and fix me something to eat.”

“I’ve been patching your britches, that’s what,” Matt grumbled. “If you’re that hungry, maybe you’d ought to fix your own damned supper.” He threw the pants down and stomped into the kitchen.