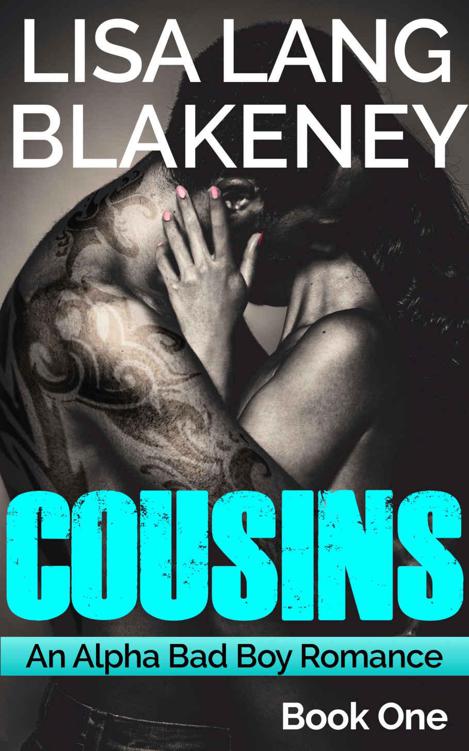 Introducing COUSINS, book one of the forbidden and passionate new romance series by Lisa Lang Blakeney.

Our passion is incredibly intense. The connection between us borders on the possessive. Our feelings are absolutely forbidden. We're cousins…The question now is…what the f*ck are we going to do about it?

After Elizabeth Hill is brutally attacked in her apartment by an intruder and then unceremoniously dumped by her ex-boyfriend, she moves in with her wealthy aunt and uncle who assign her older cousin the task of keeping an eye out for her. All she remembers about her cousin Roman is that he was the moody mean boy who played a cruel trick on her when she was just six years old; but soon learns that he is now a complex and multi-layered man who has the ability to protect her, ignite her, and challenge her like no one ever has before.

Wealthy Roman Masterson makes his fortune by fixing celebrity problems for big money and by any means necessary. He is a foul-mouthed, bad-tempered, manwhore who doesn't have the time or inclination to babysit a gullible little brat from the suburbs…until he unknowingly spots her in the middle of a crowded dance floor and decides right then and there to claim every one of her orgasms from that moment on. Little does he know that the woman he's laid claim to is his…cousin.

Disclaimer:
All characters in the book are 18+ years of age, non-blood related, and all sexual acts are consensual.

To be notified of the release of Book 2 in the Cousins Series as well as upcoming new books, teasers, giveaways and ARCs!

This book is a work of fiction. Any similarity to real events, people, or places is entirely coincidental. All rights reserved. This book may not be reproduced or distributed in any format without the permission of the author, except in the case of brief quotations used for review.

This book contains mature content, including graphic sex. Please do not continue reading if you are under the age of 18 or if this type of content is disturbing to you.

NOTE: All characters in the book are 18+ years of age, non-blood related, and all sexual acts are consensual.

I NOTICE THAT ETHAN HAS an unusually glazed look in his eyes when he pops his head up from under my tangerine strapless sundress, which he has leisurely pushed up right above my hips. He has been licking and lapping between my legs for several minutes in a grand effort to get me primed for what is to come next, and he looks like he is definitely ready to give it to me as soon as I give him the go ahead.

"You like that Bitsy?" His mouth turns into a goofy grin. One that I've always been unable to resist. Although I thought I had made it perfectly clear that I hadn't waited all this time to have sex with Ethan just to give it up casually, unplanned, or on a whim. Yet somehow I find myself spread eagle, on top of my brand new tufted pink comforter, panties God knows where, and nervous as all hell. I know full well that having sex will change everything between us, which is why I've been especially careful about the when and the where ... up until now. We weren't even suppose to be here tonight, but Ethan's car was acting funny; so it was either chill at my place or end the night early.

"Don't pull your top off yet," he whispers in my ear as an attempt to sound seductive. Unfortunately Ethan's attempt at being sexy comes off somewhat awkward, and his request for me to keep my top on seems just wrong.

"Why?" I ask while lowering my arms from above my head. "You haven't even touched my boobs yet."

Don't need to touch them? What the heck was he talking about? Ethan had been rubbing, kneading and sucking on my breasts since we started going out, getting me ready for what I guess was this very moment. Usually when we played around in his dad's old Audi after one of our dates, he couldn't keep his hands off of the girls, and I loved it. I thought he did too. I know he chugged down a beer or two when we were watching television earlier but something seems off with him. I'm just not sure what it is. Yet when he says those last three words, "just trust me" and flashes me a smile with his lips still moist from earnestly eating me out, my decision is already made.

As far as boyfriends go, I know that I've hit the jackpot, at least among my small inner circle of friends. I've known Ethan since my freshman year of UPenn, and girls have always fallen all over themselves when they're around him. Not much has changed since graduation; they still do.

When our friendship started to evolve into more during our senior year, I made the decision to take things super slow, because I am quite aware of Ethan's sexual history. Not wanting to be just another one of his conquests, I've been making him wait for over a year to have sex with me, and he's been quite patient, but I'm not sure how much longer he's going to wait for me. Truth be told, I'm not sure how much longer I can even wait. I mean I'm not a virgin. I'm just very selective about who I give it to, especially since I seemed to have picked so badly in the past. My high school boyfriend was a Grade A jerk.

"Okay," I murmur softly. Wait over.

I lower my lids in an effort to do as he asks and simply relax and enjoy the moment, but Ethan's cell phone starts ringing for what is the third time in the last 15 minutes. He stops touching me and reaches over the side of the bed to check the screen. Immediately I imagine the worst, and I think he notices the distrust written all over my face. While Ethan has been a pretty good boyfriend to me, being with him has made me the target of dirty looks from girls we went to school with and beyond. He's definitely good looking, but he's also a very promising swimmer who is training for the next Summer Olympics. Many girls see fame and endorsement dollars when they look at him, and I know that many have the capability of being downright ruthless in order to get who and what they want. So I keep my eyes and ears open. Constantly. It's exhausting sometimes, but my mother once told me that every man has their Achilles heel, and my fear is that the vagina is Ethan's.

"It's just Thomas. I'm going to turn it off," he tries to assure me in an effort to keep me present in the moment.

I assume that question is Ethan's not so subtle way of checking to make sure I'm still on board, so I nod my head in agreement. He smiles and continues his seduction by slowly gliding the palms of his smooth hands up my thighs while pushing my dress up even further under my breasts to deliver a few feathery kisses around my navel.

Just when I think he is going to actually take my dress completely off and continue with his leisurely stroll around my body, he skips ahead and makes his way to my lips, shoving his tongue inside, rapidly moving it back in forth in my mouth. Kissing Ethan is typically a nice experience, but like I said, something is off. His kisses seem sloppy and amateurish, and as he is getting more excited, I am starting to feel smothered under the weight of his large body and the faint smell and taste of beer on his breath.

"You ready for me Bitsy?" He asks using my nickname in his deepest baritone voice.

Reluctantly I shake my head yes, although all the flashing signs in my head are telling me to STOP! I don't want this to be my first time with him. Not here, not like this, but then I consider what would happen if I attempted to stop him. Would he be angry with me? Would he want to end things? Would he tell his friends that I'm frigid? Would he start taking Penny's calls? Wouldn't it just be better to get it over with? Rip the band-aid off so to speak.

Trust me, I am seriously considering slapping my own self for having these sorts of insecure thoughts, but I have little control over what pathetic things pop into my head at any given time. I know that these are totally the wrong reasons to have sex with someone, but is there ever truly a perfect moment? There hasn't been one yet. Maybe I'm over thinking this whole thing.

Ethan stops and looks wildly in my eyes for a moment. I've never seen this look before. It's as if he needs me in a way that he never has. I've been pretty quiet this whole time, and God knows he's waited a long time for this to happen. So I decide to go ahead and give him the assurance he needs.

I touch the right side of his face gently with my palm. "Go ahead Ethan."

His face relaxes since that seems to be just what he needs to hear. He reaches in his back pocket and pulls out a condom, opens the foil packet, and rolls it onto his long but rather slender penis. I do my best not to ruin the mood by asking him why he even has a condom so conveniently on his person. I can't imagine that he thought that this was going to definitely happen, but I don't want to sound like the insecure girlfriend.

I worry for a split second about pregnancy because the condom seems really thin, like it could easily snap like an old rubber band pulled too tautly. But maybe that's how all condoms look. I never really watched the only other guy I've had sex with put his condoms on. I was in high school and too embarrassed to really look. Obviously I had no business having sex with him either.

Ethan lowers himself back down and gently starts kissing the side of my neck. It feels relaxing, but as he starts to slowly poke and prod his way into my opening, the muscles in my neck and shoulders begin to tense up. I'm not sure why this hurts so much, like I said I've done this before, but I am seriously thinking about pushing him off and running the hell out of my own bedroom. I feel like a virgin all over again. Yet as soon as I go to open my mouth to say the word wait, he kisses me deeply and mutters in my mouth, "Hold on tight Bitsy."

As he pushes further inside me with several hard thrusts, I flinch from the unfamiliar fullness, but he doesn't notice my discomfort because his head is burrowed so far into the side of my neck now. He groans while methodically pumping and pushing inside me for a few more minutes, then he speeds up for a few seconds, right before he completely collapses on top of me. He's so frackin' heavy.

Before I can even process whatever that anticlimactic moment was that just passed between us, we both jump at an unexpected loud crash. It sounds like someone has just rammed their head completely through one of my front windows. Ethan jerks his head up, leans his torso over the side of the bed, and reaches underneath for his phone.

"Fuck!" He starts furiously texting someone.