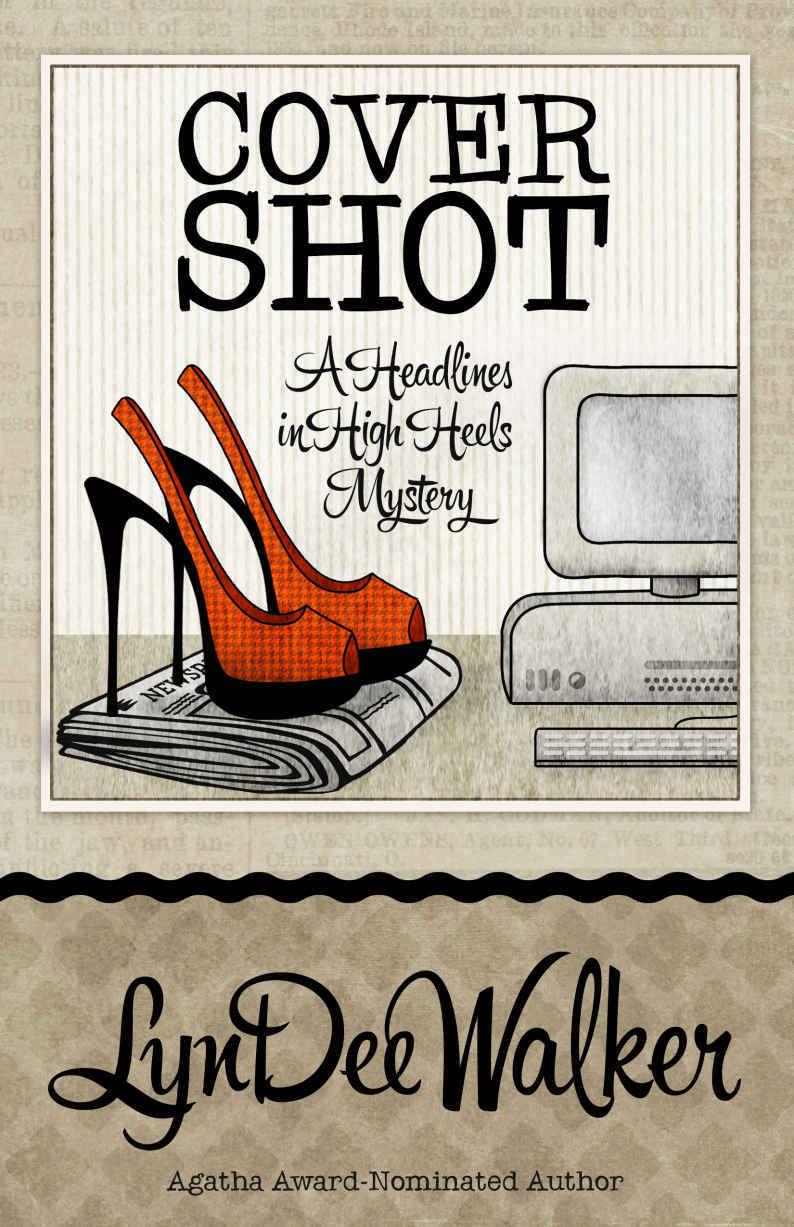 Praise for the Headlines in High Heels Mysteries

Books in the Headlines in High Heels Mystery Series

In Case You Missed the 1st Book in the Series

In Case You Missed the 2nd Book in the Series

Don’t Miss the 3rd Book in the Series

Don’t Miss the 4th Book in the Series

PORTRAIT OF A DEAD GUY

MURDER ON A SILVER PLATTER

Praise for the Headlines in High Heels Mysteries

New York Times
Bestselling Author of
Through the Evil Days

“Nichelle proves herself to be a standout. She has the cynicism of jaded police officers but also the hope of a champion and advocate for justice. Of course, a healthy sense of humor always helps. Readers who enjoy the outstanding novels of Pulitzer Prize-winning journalist Edna Buchanan will find themselves similarly entertained by this stellar series.”

“When the answers are all revealed, they come together in a nice little package that is wrapped up neatly for the reader. Even so, it leaves questions for Nichelle, which, I am sure, will be carried into the next book in this series. Recommended.”

“A riveting mystery with big ideas and wonderful characters.
Small Town Spin
is a treat not to be missed, a fantastic addition to the Headlines in High Heels series.”

“Nichelle Clarke jumps headlong into any situation with courage and tenacity, not giving up until she gets the answers she wants.”

“Mafia hotties, corrupt politicians, old flames and murder…all this in her incisive exposés and her aubergine Manolo Blahniks. A smart and sassy heroine.”

“This book has a great mystery, a ton of humor (I know I’ve already said that, but it was worth repeating) and really wonderful characters...I really hope there are more books in this series.”

“Nicey’s adventure kept me guessing. Goes down as smooth as hot chocolate with whipped cream.”

“
Front Page Fatality
is delightful, with engaging characters, a crackling good mystery, and of course, high, high heels. LynDee Walker writes with wit and intelligence and the confidence of a newsroom insider. What fun!”

Books in the Headlines in High Heels Mystery Series

and we’ll deliver the latest on new books, sale books, and pre-order books, plus all the #chickenchatter from the Authors of Henery Press.

(Note: we won’t share your email address and you can unsubscribe any time.)

A Headlines in High Heels Mystery

All rights reserved. No part of this book may be used or reproduced in any manner whatsoever, including internet usage, without written permission from Henery Press, except in the case of brief quotations embodied in critical articles and reviews.

This is a work of fiction. Any references to historical events, real people, or real locales are used fictitiously. Other names, characters, places, and incidents are the product of the author’s imagination, and any resemblance to actual events or locales or persons, living or dead, is entirely coincidental.

For Gabriel, who can always make me laugh.

Never stop smiling. I love you.

Every time I open a blank file, I wonder if I can really turn all that whitespace into another novel. But no book is a solo project, even though there’s only one name on the cover.

Always, big thanks to the wonderful team at Henery Press: Erin, Kendel, and Rachel for making this a better story, Art for connecting readers with Nichelle’s world, and Stephanie for putting a pretty face on my words.

My favorite computer experts, Elliott Cutright and Andy Hallberg, thanks for explaining things in terms my not-very-technical brain could understand and use.

Gretchen and Ris, what would I do without you girls? Thanks so much for holding my hand through another one. Hugs.

The other best thing? The amazing readers. Thank you to everyone who’s come to an event or sent me an email or online message—knowing that you connect with the stories and the characters keeps me writing on the harder days. And special thanks to the Mystery Minions, definitely the most fun street team in all of cyberspace.

Julie Hallberg…well. Just, thank you. For all the things. None of this would be here without you, doll.

My littles, who I love with the fire of ten thousand suns: thank you, monkeys, for understanding when mommy needs to play with her imaginary friends. You are the best children any mom could ever ask for.

My husband, my partner in adventure, and my very best friend: thank you for believing in me, and helping me find time and motivation to finish this one. I love having you in my corner, and I love our life together. Always.

Number one rule of local news: if it bleeds, it leads.

Rule number two? Timing is everything. When nothing is bleeding, reporters pay attention to things they might ordinarily ignore.

Like, for instance, the Twitter message flashing in the corner of my screen late on a quiet October afternoon.

TIME GROWS SHORT. THEY WILL PAY.

I slumped back in the chair in my little ivory cubicle at the
Richmond
Telegraph
, my eyes scanning the words again.

Sure, every crime reporter in America has picked up a few nutjobs—the internet just makes it easier for them to find us. My habit of sticking my nose into some of my more tangled stories makes me a bit of a troll magnet, too. But three messages in two weeks, all in the same harsh all-caps characters, all just ominous enough to be interesting—my eyebrows jumped to my hairline as I scrolled back to reread the first two.

Thirteen days before, at 3:47 in the afternoon: SECRETS=DEATH. THEY WILL TALK.

They who? Pay for what? Help with what? Asking questions is my job, which works out nicely for my borderline-nosy nature. My fingers inched toward the keyboard, and I jerked them away.

Journalism in the age of the Internet 101: never engage with a creeper. Whoever LCX12 was, he had the upper hand, because he knew exactly who I was. And where I worked.

Two good reasons to stuff my fingers in my pockets and go back to blowing off the messages.

But the lack of anything better to do combined with a surge of what-if-itis (What if someone gets hurt? What if I can help?) kept my attention on the screen.

I clicked to the profile.

No name, no tweets to show, no followers or following.

I studied the handle: LCX12.

Initials? Couldn’t be but so many last names beginning with X. I clicked over to the DMV site (my paid subscription to their records service often comes in handy) and logged in. Search parameter: twenty miles around Richmond, last name, first letter. Find.

Thirty-nine matches. More than I hoped for, especially since I had no clue if this goose trail went anywhere.

No one would be so stupid as to send stuff like that from an account with their initials on it, my inner Lois Lane whispered.

I copied the names into a file and checked birthdates: nine in December and three on the twelfth of another month.

I made another list for those, clicking back to the messages.

A few minutes of staring at them later, I reached for the phone, my fingers clumsy as I tried to dial a once-familiar number.

A ring trilled in my ear. Deep breath. My long-ago ex had grown up to be a Bureau of Alcohol, Tobacco, Firearms, and Explosives SuperCop. The kind who’d saved my life more than once. And he no longer wanted to be my ex. Which would be great, absent one super-sexy boyfriend-type guy.

Kyle had kept his distance for weeks—nursing some emotional wounds after his physical ones healed, I figured—but he’d help. I hoped.

“Kyle, it’s Nichelle.” I forced brightness into my voice. “I have a…situation here I could use your help with. Can you give me a call back when you have a second?” I tapped my pen on the desk. “Business. That’s all. This is weird.”

I hung up, unsure what was stranger—the vaguely threatening DMs or me being nervous about talking to Kyle. Kyle, who’d taught me to drive a stick, taken me to prom, and taken my virginity two months later.

“I thought you’d forgotten about me,” Aaron White said when he picked up his cell.

“Slow news week.” I leaned back in my chair. “A nice seat in a courtroom, going home at dark—it’s been lovely. What’ve you been doing with yourself?”

“Working. I’m still buried in cases you’re not writing about anymore, when I’m not fielding reporters’ phone calls. The joy of budget cuts.”

“Preaching to the choir, Detective,” I said. Days at the courthouse covering trials are easier than ones spent poring over fresh crime scenes, but work is work. “I have something that might be interesting enough to talk about here, though. Wondering if I can pick your brain when you have a few minutes.”

“Perfect. Meet you at Capital Ale in twenty?”

My scanner bleeped just as an ear-splitting pop of static issued from something in Aaron’s office. I set the phone down and turned the scanner up.

I picked up the phone.

“Slow news week. You jinxed us,” Aaron growled. “That’s a condo complex on the river. See you there.”

I clicked off the call and slung my bag over my shoulder, the messages taking a backseat to the first possibly newsworthy corpse we’d had in over two weeks.

So much for quiet.

High Risk by Vivian Arend
I Am No One You Know by Joyce Carol Oates
Element, Part 1 by Doporto, CM
Nick by Inma Chacon
Tori Amos: Piece by Piece by Amos, Tori, Powers, Ann
Shifted By The Winds by Ginny Dye
Life on the Ramona Coaster by Ramona Singer
Flat Broke by Gary Paulsen
Grim Crush (Grimly Ever After) by S.L. Bynum
The Grey Pilgrim by J.M. Hayes