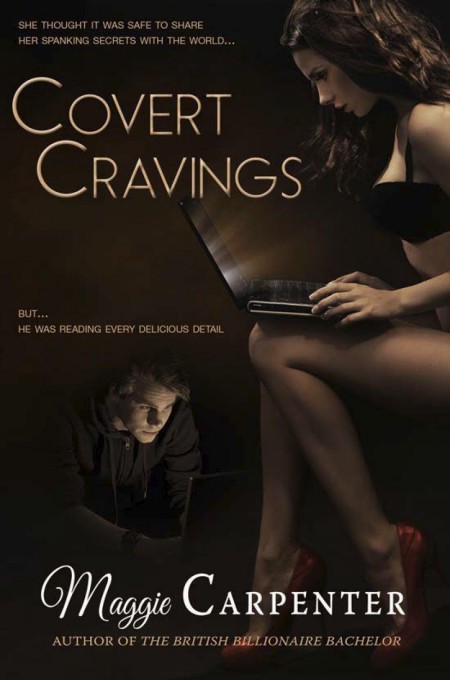 ©2013 by Blushing Books® and Maggie Carpenter

All rights reserved.  No part of the book may be reproduced or transmitted in any form or by any means, electronic or mechanical, including photocopying, recording, or by any information storage and retrieval system, without permission in writing from the publisher.

The trademark Blushing Books® is registered in the US Patent and Trademark Office.

This book is intended for
adults only
.  Spanking and other sexual activities represented in this book are fantasies only, intended for adults.  Nothing in this book should be interpreted as advocating any non-consensual spanking activity or the spanking of minors.

WOULD YOU LIKE A FREE SPANKING STORY ON YOUR KINDLE EVERY MONTH?

That's right.  FREE.   And we're not talking about some short “throw-away.”   Every month, Blushing Books gives our customers a novella-length story (typically five chapters and at least 15,000 words) completely free.   You can always download our current month's story at our website, located at http://
www.blushingbooks.com.

But we're offering an additional service for Kindle customers - we'll send the monthly free story directly to your Kindle device.  You don't need to do anything, pay anything or remember anything.  Every month, a free story will just magically appear.

1.  Email us at [email protected], and put FREE KINDLE STORY in the subject line of your email.

2.  In the body of your email, you will need to provide your
KINDLE's email address.  Your Kindle email will end with @kindle.com.   If you do not know your Kindle email, you need to log on to your Amazon account and find it under "manage my Kindle."

3. You’ll also need to add
[email protected] to your permitted email list on Amazon (otherwise your Kindle will not accept email from us.)   If you don’t do this step, you will not get the story.  This is also found under the "manage my Kindle" section of your Amazon account.

Once we get an email from you, you'll be added to our free monthly story list.  You'll receive one free story per month - but nothing else, no advertising, spam or any other unwanted content.    And remember, if you prefer, you can always get the free story at
www.blushingbooks.com
.

DO YOU NEED A TRIP TO THE WOODSHED?

See the stories first at The Woodshed!

“
Thank you for opening this and being interested. I'm just a submissive who loves to write about the D/s lifestyle - and other bits and pieces as they come to me. If you've read my books I am grateful and I hope you enjoyed them.

“
Though I'm comfortable writing fiction and poetry I do have difficulty writing about myself and I'm not sure why. Does it help to know I have a horse that I ride every day and whose unfathomable energy calms and centers me? Or that I share my space with the sweetest little mutt ever?

“
If you'd like more insight into Maggie the submissive, then I suggest you read my blog. It is an honest accounting of who I am and every entry comes from the heart. It can be found on my Author's Page - there is a direct feed on the right hand side.

“
Thank you again for your interest and support.”

Praise for The British Billionaire Bachelor:

Prepare To Fall In Love!
I bought this just a day ago and already finished it, I couldn't sleep due to thinking about Simon. He is simply all-male heaven! Loved this book! Maggie Carpenter has done it again! This book starts fast, and it keeps you reading. Naughty and awesome! – C F

“I loved this book, but of course, why would I not. Maggie's books are and remain some of my favorite in this genre. Her visualization and context bring your eros into focused reality when she tells you the story. The life-styled themes, spanking, bondage and submissiveness are compelling and let you feel as the characters do…” – Joseph McNamara

“Will you be much longer?”

God, he sounded impatient.  Dammit!  “Almost finished.  Just checking the shoe sale!” Emily shouted.  Staring back at the computer screen, she attempted to focus.  Her blog was finally starting to get some attention and she hadn’t had the opportunity to post anything new in a couple of days.

“When he picked up the hairbrush, I could feel the hot, hard sting before he even crossed the room…”

“Jeez, Emily.  How many more pairs of shoes do you need?” he yelled back.

Emily grunted.  She couldn’t concentrate with all his interruptions.

“If you keep me waiting much longer,” he called.

Her longtime boyfriend, Scott, in bed waiting for her, was most definitely running out of patience.

“His walk was slow, painfully slow and—”

Throwing up her hands she silently asked the Gods why it was she could only write this stuff at night when Scott was at his most demanding.  Clicking off the screen she ambled into the bedroom.  She longed to tell him what she was really doing but she knew he wouldn’t understand, let alone approve.  He was such a sweet, considerate, gentle guy.

Hmmm,
she thought.
Maybe that’s it.  Maybe I can get him to spank me by telling him.  I think it would piss him off to know I was spreading my naughty fantasies with the Internet world and not with him.  Oh, that sounds bad.  Really bad.  Not in a million years could I tell him!

She was wearing one of his expensive white T-shirts. She wore them mostly because they were soft and big and floated around her like a cloud.  He only bought quality clothing and the high-end cotton was vastly superior to anything she owned.  And also because hers were stained and old and she should have thrown them out eons ago and bought new ones, but it was just one of the many things she’d not gotten around to do.

She padded into the bedroom and stared down at him.  He was lying naked on top of the sheet; the bedcovers pushed back, his cock at attention.

Giggling, she climbed on to the bed, and taking his member in her hand guided him home.  No need for foreplay.  She was plenty wet after spending 30 minutes writing about all kinds of perverted mayhem.

She moved slightly, eliciting another groan.  Taking the T-shirt by the hem she pulled it up and over her head.  A light bulb lit up in her head.  She twirled it from her hand, turning it into something that resembled a thick rope and laid it across his eyes.

“You’ll get to look at me if you’re a good boy,” she teased, wishing their roles were reversed, and
he
was making
her
cover
her
eyes!

She moved her hips, sliding up and down on his cock, and reached behind her to tickle his balls.  He moaned happily and brought his hands up to her hips.  Clutching her tightly, he pressed his fingers into her flesh.  She groaned, throwing her head back.  His hard hands were holding her, really holding her.

He had never pressed his fingers into her skin so aggressively.

“Scott,” she said huskily.  “That feels really good when you grab me like that.”

“Oh yeah?” he breathed, digging his fingers even deeper.

She let out a high–pitched whine.  Encouraged by her reaction and his own potent vigor, he unexpectedly sat up.  The T-shirt fell away and she gasped in surprise; by supporting her back he laid her down, rising up over her.  Emily saw something in his eyes.  Something new.  Something very, very sexy but she only had a moment to catch it.  Without warning he began fucking her, pumping her with deep, powerful thrusts.

“Oh my God, Scott,” she cried, “that feels...” Emily’s head was spinning.  In all the almost two years they had been together she had never known him to ride her with such urgency.  He was taking her, filling her.

“You’re mine baby, right?  Tell me you’re mine!” he demanded.

“Yes!  Yes!” she cried out, her climax about to explode, the unexpected forceful sex shooting her to the edge.

“Yes what?” he pressed, his voice deep and brusque.

His cock surged forward, shooting his cream with a shuddering, violent climax.

They were gasping and breathless, both stunned by the intensity of the unanticipated exigent fucking.  Scott collapsed next to her on the bed.

“What – the hell – was that?” Emily asked, barely able to get the words out.  “I mean – five minutes and fireworks?”

She was absolutely flabbergasted.  Their twenty-minute, slow, deliberate lovemaking, the usual gentle ride down the river to the waterfall, then over the divine edge was AWOL.

He grinned and turned to look at her.

“That,” he answered, “was me really fucking you!”

“Scott, I don’t know what got into you tonight,” she breathed, still gasping for air, “but I’m not complaining.”

Scott leaned in and kissed her nose, then her cheeks, then planted a long, warm, wet kiss on her mouth.  She sighed contently.

“What do you think?” she giggled.

You don’t want to know what I think,
Scott said silently,
but you will, soon enough!

“
Long day Bunny. Cuddle close. I need to sleep,” he crooned, and rolled to his side and drifted off, surrounded by a hazy state of contentment.

Emily, however, was staring at the ceiling.

Ok – that was weird.  A fantastic, brilliant, amazing weird, but still weird.  Maybe he’s picking up my vibe?  Maybe we’re on some kind of strange psychic wavelength.  Was it because I put the T-shirt over his eyes?  Couldn’t be.  Could it?

The enticing questions swirled through her head, but her eyes were closing.

Her mind wandered to one of her favorite fantasies.  She was walking in the door fifteen minutes late and Scott would grab her by the wrist and yank her across his lap.  He would scold her for keeping him wait yet again, he would then push her brown and white skirt – the one he said he found really sexy on her because it molded her ass so perfectly – up to her waist and would start whacking her butt.  She wriggled in the bed, subtly disturbing his sleep. He rolled over and threw his arm across her.

His arm that was muscled and strong from hours in the gym.  His arm that she knew could wrap around her waist and hold her immovable.  The arm that could lift her and throw her over his shoulder, spanking her butt as he carried her to the bedroom to throw her on the bed.

The Alembic Valise by John Luxton
Goodbye Arizona by Claude Dancourt
PathFinder by Angie Sage
After Delores by Sarah Schulman
Someone Like me by Lesley Cheetham
No Holding Back by Dresden, Amanda
Strife: Hidden Book Four by Colleen Vanderlinden
Dolce (Love at Center Court #2) by Rachel Blaufeld
Vespera by Anselm Audley
Ransom by Denise Mathew