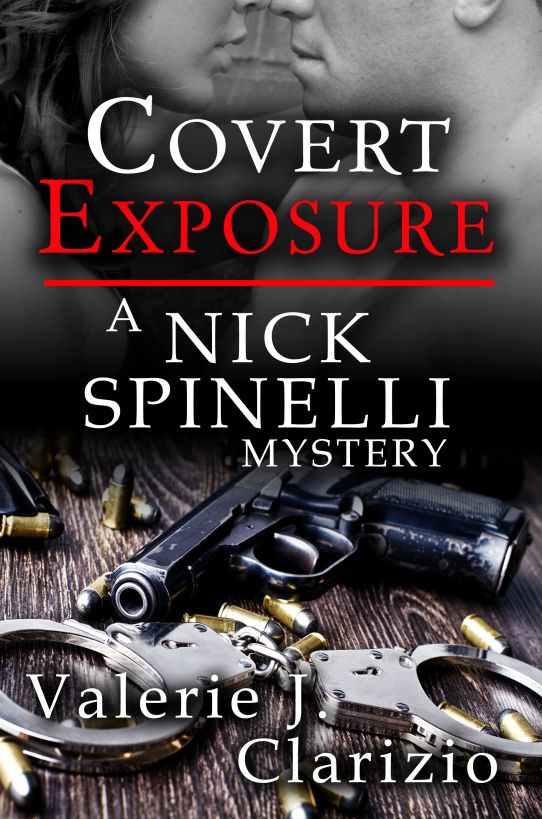 Detective Spinelli’s life is tossed sideways
when he is reassigned from the Homicide division to assist in the
Child Services division of the Social Services Department for the
holiday season. From the beginning, Spinelli and Caseworker Shannon
O’Hara generate their own kind of fireworks, causing more than the
normal workplace stress. They both have their own philosophies for
dealing with the clientele. However, the forces of nature have
their own plan for Spinelli and Shannon.

Shannon moonlights as Santa Claus’ little
helper at the mall, and when Santa and an elf turn up dead Shannon
appears to be next on the killer’s list. Spinelli is placed back on
homicide and goes undercover as Santa to help capture the killer.
He catches a great deal of grief along the way but will he capture
the heart of his little Santa’s helper as well?

To my husband, Rick. Thanks for washing the
dishes and entertaining the cat so I could lock myself in the
computer room to write.

To my brothers. Thanks for the tidbits of
male perspective you provided to me whether I wanted them or
not.

A special thank you to my first critique
partner, Virginia McCullough, who taught me about the craft of
writing, and red-lined my first manuscript more than I care to
admit.

Last but not least, thank you Darla
Tong for taking the time to read and re-read every manuscript I
wrote until I got it right.

Spinelli held his coffee mug high.
“Congratulations, partner, you made it through. Enjoy your
retirement. Here’s to Mad Dog Maxwell.”

Shouts of “Congratulations” rippled through
the downtown Milwaukee precinct as the detectives toasted Maxwell
with their coffee and doughnuts in hand.

Spinelli watched
Mad Dog smile and nod at everyone as he carried a cardboard box
stuffed with a career’s worth of personal belongings out the door
for the last time. Everything he knew about being a great homicide
detective, he’d learned from that man. He missed him
already.

Mad Dog was the only one who gave him the
time of day when he started on the force as a snot-nosed hotshot
kid some years ago.

His eyes came into focus. “Yeah.”

“I need to talk to you,” she yelled across
the room as she waved him over.

Jackson took a seat behind her desk as he
entered her office. “Shut the door, Spinelli.”

He did as she asked, then fixed his gaze on
her. He stepped back and rested his butt on the two-drawer file
cabinet next to her desk.

“What’s up, Cap?” he asked as he raked his
hand through his hair.

“You’ve been temporarily assigned to Social
Services and you will need to report to Ms. Fontaine on the fourth
floor until further notice.”

A chuckle escaped Spinelli’s lips. He turned
his head to glance through Jackson’s office windows toward the
detective desks located immediately outside her office doors. He
looked for the mastermind behind the practical joke but he saw
none. Not one detective in the office

joke to take hold. He cut his eyes back to
the Captain. “This is a joke, right?”

She shook her head. “This is no joke,
Detective. Until further notice, you’ve been assigned to Social
Services. The holiday season is tough on that department and they
need extra hands with child recovery and placement.”

Spinelli sprang to his feet and stepped
toward her desk. “Captain, you’re shitting me, right? Child
recovery and placement. What the hell is that crap?”

Spinelli reached toward his chest, lifted the
gold colored badge hanging by a chain around his neck, and centered
it directly in front of Jackson’s eyes. “In case you don’t
remember, this is a detective badge. I’m a homicide detective, not
a child recovery and placement detective.”

Jackson rose to her feet and pointed at the
white lettering on the glass of her office door, which simply read
Captain Jackson
. “In case you don’t remember Detective, I’m
Captain Jackson. You’ve been reassigned to Social Services until
further notice. Ms. Fontaine is waiting for you upstairs.”

Spinelli stared at the Captain for a moment,
his mind racing for a reasonable excuse as to why he shouldn’t be
reassigned. “But my clearance record, it’s impeccable. Shouldn’t
that mean something? And we’re short staffed down here as it
is.”

Jackson shifted her eyes away from Spinelli,
looking past him and through the glass windows of her office. She
pointed toward his crime board. “That’s just it, Spinelli. Your
board’s almost clean and the other teams are overloaded with open
cases. As for staff shortages, with the Mayor’s budget cuts and
directive to not replace retiring staff every department is short
staffed. Additionally, you’re the only Detective right now without
a partner. You’re the logical choice to be transferred.”

Jackson raised her hand, cutting him off. “No
buts, you’re it. And you can still help out down here when you’re
not needed upstairs.”

Air hissed from his lungs, drowning out the
words she spoke. Spinelli lifted his gaze to meet hers; the look in
her eyes told him the deal was done. He fought hard to find a
voice, “How long? How long

“Again, it’s a temporary assignment just for
the holidays. The holidays are tough on the Social Services
department. Their

clientele…well, it’s a tough time of year for
everyone, those folks especially.”

Spinelli willed his right foot to step
forward, then his left foot. “Repeat motion,” he whispered to
himself until he reached the stairwell. He chose not to take the
elevator. That would be too quick. He needed time to let his new
assignment sink in. His mind spun to find ways to get out of it.
Within minutes, he found himself standing in front of a glass
paneled door with the words “Department of Social Services” etched
in the glass. His long legs carried him up the stairs faster than
he desired.

He sucked in a deep breath, lifted his hand,
and pushed the door open. He stepped through the doorway and into
the reception area where he paused to take a look around. A cold
chill ran up his spine as he studied the packed area. He noted that
the clientele consisted of mostly women and children. He watched
the children for a moment as they noisily played about the room.
His ears registered a decibel level of at least two-hundred plus,
far louder than any dirt-track stockcar race he’d ever attended. He
lifted his fingers to his temples and pressed slightly but the
throbbing continued.

With his eyes still focused on the children,
he took a step toward the reception desk and accidently caught his
foot inside a dollhouse. He tumbled forward, his heart racing, his
breath quickening, and his hands uselessly flailing. He took a
header right smack dab into the front of the receptionist’s desk
and darkness fell upon him.

Spinelli opened his eyes to find several
children gazing down at him. He bounced up as quickly as a weeble
wobble and rapidly looked about the room but the second he planted
himself on his feet the room started to spin. He felt a small set
of hands firmly gripping his left arm just above his elbow. A warm
sensation flowed through his arm and into his core. He placed the
palm of his right hand on the receptionist’s desk and leaned on it
for support.

“Are you going to be okay?” a soft feminine
voice sang throughout his head.

The sweet sound trailed off and silence
filled the air.

The voice sang through his head again. “Are
you okay? Do you need to sit down?”

Spinelli willed his eyes in the direction of
the voice. He squeezed them shut, swallowed hard, and opened them
again. Shades of emerald green danced before him. He blinked
quickly several times, each blink bringing him closer to heaven. He
thought for sure the eyes of an angel were on him and the pearly
gates stood behind her.

He cleared his throat and found his voice.
“I’m fine. I’m Detective Spinelli, I’m here to see Ms. Fontaine.
She should be expecting me.”

The woman with the emerald green angel-eyes
released her grip from his arm but the warmth of her touch
remained. She motioned for him to follow her. Spinelli followed
“Angel-Eyes” down a long narrow corridor. He studied the back of
her starting with the shiny bright red hair-bun stationed high on
the back of her head. Not one hair was out of place. He lowered his
eyes to her inviting soft-looking milky white neck and continued on
to her petite shoulders. The navy blue blazer draped over them
perfectly matched the navy blue skirt she wore. The length of her
skirt fell just above her knees allowing him to take in the sight
of her thin yet shapely legs. He shifted his eyes up and down
several times, memorizing the backside of the woman whose soft
feminine voice still sang in his head. He concluded that her
conservative navy suit and “old lady” hair-bun did not match the
intense sexiness of her bright green eyes.

His body swayed forward, then back, as he
halted on a dime, nearly bumping into his green-eyed angel when she
stopped in the doorway of Ms. Fontaine’s office.

“Ms. Fontaine, Detective Spinelli is here to
see you,” the woman said as she stepped inside the office and
gestured for him to follow.

Spinelli studied the large woman with graying
hair who sat behind the desk. She removed her wire-rimmed reading
glasses and let them fall onto her chest pulling the colorful
beaded chain taut. She rose to her feet and extended her hand
toward him. He shook her hand.

Ms. Fontaine pointed toward the chairs
opposite her desk. “Please, Detective, take a seat.”

“Shannon, you may as well take a seat and get
acquainted with Detective Spinelli since he is who you will be
working with.”

Ms. O’Hara. She’s the case worker you are
assigned to.”

Spinelli watched as “Angel Eyes” took a seat
in the chair next to him. She crossed her legs causing her skirt to
rise up her thigh. His eyes fixed on her shapely thigh. She quickly
reached over her leg and tugged her skirt toward her knee covering
as much of her leg as the material would allow.