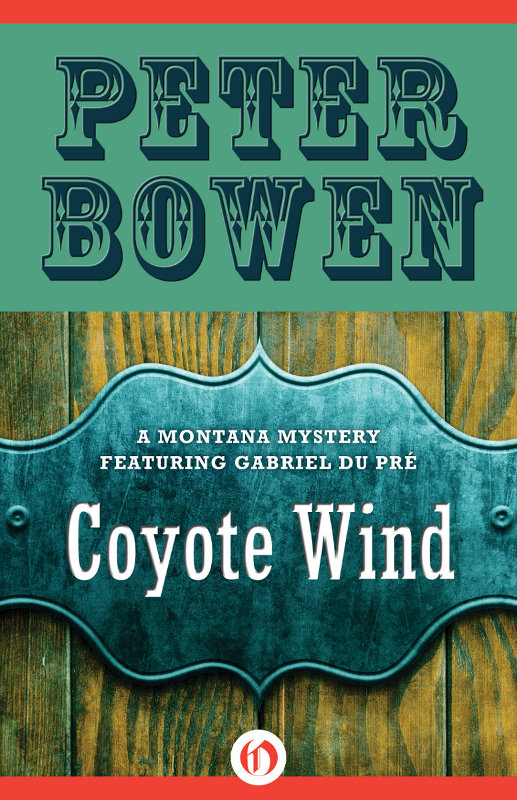 D
U
P
RÉ STIRRED IN HIS
sleep. His eyes fluttered, opened, he looked up at the ceiling. He squinted, raised his head, glanced toward the rising light in the east, out the window of Madelaine’s bedroom. Little spikes of frost reached out from the corners of the wavy old glass.

A pebble rattled against the window.

Du Pré decided it was not a dream. He slipped from the bed, a warm breath of air thick with the scent of their bodies rose from the bed. Madelaine’s lips bubbled softly, it was as close as she came to snoring.

Du Pré looked out toward the street, saw a crooked shadow on the short white picket fence. White hair askelter as a forkful of hay. Old Benetsee, the fool, the drunken old breed, a singer, once a dancer, old enough to have been most anything outside of town.

“Shit,” Du Pré whispered, annoyed at coming out of warm sleep for this. It passed. The old man always had a reason for bothering Du Pré, even if it sometimes took Du Pré years to see it. Benetsee. Du Pré could see him long, long ago, dancing in the deserts, his head one day smiling from a platter at while the king’s wife swirled in silks and scents. God damn. Loony prophets anyway.

“Du Pré!” Madelaine, now up on an elbow, rubbing her eyes.

“Benetsee,” whispered Du Pré. “I must go out, see what he wants.”

“Take him a glass of wine,” said Madelaine. “Don’t tease him.”

Du Pré shrugged into his clothes, pulled on his boots, one leather mule-ear pull came off with a final chuckling rip. His heel slid down. He walked to the stairs and placed his feet carefully going down, the resinous yellow pine steps creaked five times before his boot touched the worn woolen carpet at the bottom. He went to the kitchen, took a jug of cheap white wine from the icebox, poured a big glassful, lit a cigarette, went outside.

The old man was shivering, leaned up against the Russian olive tree, his bright old eyes brilliant black in his brown creased face.

Benetsee nodded, took the wine and gulped it down.

Du Pré waited, respecting the old man. He had been a good friend of Du Pré’s grandparents, long dead now. Plastic flowers on their graves, dust ricking in the petals. Du Pré washed them with holy water on saints’ days that had been dear to them.

“I dreamed of a coyote last night,” said Benetsee, “he went up a draw, sat and howled by some people’s bones.”

Du Pré nodded. Benetsee’s damn riddles. He wished the old fart would come to the point, which was probably five dollars. So I just give him the five dollars and go back to bed? No, the old man was not just a pest.

“Then you come and sat down on your heels and looked and looked,” the old man went on, in his slurred Coyote French, “but you never saw till the coyote come back and scratch the earth.”

Now my days got skeletons in them, thought Du Pré, but if the old man go to the police they throw him in jail for drunk. Me, I look at burn marks on cow asses for part of my living. It’s cold out here.

“You have another drink you go to sleep,” said Du Pré.

“Madelaine don’t mind,” said Benetsee. “She’s a saint, you could learn from her.”

Du Pré snorted, shook his head, went back in the house and got the old man another belt. Someday I find him dead in the frozen mud where he pissed his pants and passed out and stuck there, but for now, he’s happy. He heard Madelaine on the stairs, she came into the kitchen, her wool robe clutched tight around her against the cold.

“He can sleep in the shed,” Madelaine said. “You take him the old sleeping bag in the hall there. Also tell him good morning and when he wakes up I will make him eat something.”

Du Pré smiled. Madelaine, she would feed all the earth, soothe its pains and hungers. She was as simple and straightforward and generous as the sunlight.

And she knows what’s bothering me before I do, Du Pré thought. He smiled at his luck.

Du Pré opened the door and pushed the storm door away with his foot, scooped up the sleeping bag. A slop of wine drooled down his hand, he smelled the alcohol.

The old man sniffed the wine happily, drank it in a single long draught.

“Madelaine says you got to eat, you wake up,” said Du Pré.

“I do what Madelaine say,” said Benetsee, taking the sleeping bag and walking off toward the shed. There was an old army cot in it, on the duckboards. Flowerpots and bags of fertilizer, garden tools on nails, sanctuary.

Du Pré watched him go, smiled, went back in the house.

D
U
P
RÉ SIGNED OFF ON
the two truckloads of steers. The brands were good and the destinations usual. Feedlots in Nebraska, then to pot roasts in Chicago or St. Louis. The drivers pulled away, the long double-deck trailers stinking, green shit running down here and there from airholes, ammonia and bawling. The buyer’s check had been handed over to the Oleson brothers, Dee and Earl, in their sixties now and bent as any other old cowboys, a life of fractures and strange strains of work which bowed the bones and made the hands grow huge. They knew horses, wore farmer shoes and tractor-driver hats, claimed it was so that folks wouldn’t think they were just truck drivers.

“Some fine day,” said Ike, wiping sweat from his forehead with a hand gnarled as old roots. “Earl busted his ankle again chowsing them cows outa the brush. I was too old for this forty years ago, thought I’d maybe do something else, but here I gone and done it anyway.”

Du. Pré chuckled. What was this place, Montana? Breeds, and squareheads from Scandahoovia, other families from the common American ruck. The land was tough and poor and so were the people. Old cars and old shacks fell into the earth, people starved out in the twenties, left the dried out dust-eaten little ranches with their homes in their hands. Too poor then to buy grease for the axles of their wagons. The wooden wagon beds could be found beside hundreds of the little trails, gone silver from the sun, parts of them charred from the wheels catching fire where they rubbed the axles to flame.

“When you going to fiddle again?” Du Pré said, looking at Ike Oleson. The old cowboy, never married, a Hardänger fiddler, two extra drone strings on his sawbox. Du Pré fiddled, too, but just the old four-string kind, like his ancestors, the voyageurs, with their red sashes and little tobacco pipes, tasseled caps and the beaded moccasins.

“Sunday afternoon,” said Oleson, “at the bar in Toussaint. Good Swede music, men we let you play to clear the hall.”

Du Pré heard the
squak squak squak
of his two-way radio, the dispatcher’s stripped voice. What’s this? Well, sometimes I get to play lawman, when me Sheriffs deputies are all tangled up. I even have a gun somewhere in that car, I think the trunk. Maybe under the front seat.

Du Pré walked to his old Plymouth, actually bought from the cops, shorn of lights and siren, but still with clips on the door for a rifle and one small bullet hole in the rear window.

“Du Pré.” he said, pressing down the red button on the mike.

“Gabe!” boomed the Sheriff’s voice, big loud man, everyone liked him even though he sometimes hurt their ears.

“We got a bad wreck on the highway near the Res—and Toomey is off with that busted arm. Them rich drunks own that big house in the foothills of the Wolf Mountains, you know the place?”

“Yah,” said Du Pré. Everyone knew the place, ten thousand square feet of house, bigger than the high school in Pomeroy, for Chrissakes, looked like it dropped from space. The people in it came from East Coast money, lots of it, enough to hire help for everything.

“One of their hands claims he found a plane wreck and some skeletons or something up in a dry draw, up high, he was looking around, he said. Probably chasing a deer he shouldn’t have shot. Wonder if you’d go look?”

“Don’t the FAA handle that?”

“I called them,” said the Sheriff. “They got no record of any missing plane could be where the cowboy says it is, so they want proof it is one ‘fore they get off their asses.”

“Am I gettin’ paid for this,” Du Pré wondered loudly, knowing the answer.

“You know we ain’t got that kind of money,” said the Sheriff.

Du Pré wondered if the cowboy had got kicked in the head or something, was seeing things, like Benetsee.

“What’s that all about?” said Ike Oleson.

“I dunno,” said Du Pré, “some shit about a plane crash in the mountains. I got to go look at it.”

“Up past them rich shits, in the Wolfs?”

“Hell,” Ike said, “I bet them people see things like that all the time. I saw Mrs. Fascelli out there once, she sashayed buck naked across the lawn wavin’ an umbrella, singin’ she was Mary Poppins or some damn thing.”

“Glad I don’t have money,” said Oleson. Du Pré nodded, and got into his car.

“What’s that?” said Bodie, his little eyes narrowing. Too many syllables, Du Pré was making fun of him.

Bodie considered the hyphenate, spat in the dust.

“I need a horse.” said Du Pré, “and you guide me up where you found this wreck.” You stupid son of a bitch.

“No, I don’t think you lyin’,” said Du Pré. I think you’re so fucking dumb you probably found an old campfire and two white rocks or something. And I pick out the horse I want, they must all hate you a lot.

“Hey!” A shout from the huge stone and glass and redwood house, a fat red face hanging out a window.

“Who the fuck are you?” said the face. Someone inside pulled, the face disappeared.

“Don’t mind him,” said Bodie. “He’s about ready to go off to the dry-out place again.”

Bodie walked away, Du Pré followed. He had stopped at a little grocery and beer place on the way, bought jerky and candy bars and a couple butane lighters, case he had to stay out overnight. Late as it was, he would.

Bodie threw Du Pré a catch-rope, pointed to a small cavvy of horses, began hauling saddles, blankets, and tack out of the shed. Clouds were stacking up over the wolf country, high, stuck on the peaks. Du Pré saw an eagle floating motionless. Good. Never mind he had to hold the road map out as far as his arms could stretch to make out the names of the larger towns. Glasses had a way of getting lost and broken.

El mundo y sus demonios by Carl Sagan
STRINGS of COLOR by Marian L. Thomas
Something Reckless by Jess Michaels
Reflections in the Nile by Suzanne Frank
For Eric's Sake by Carolyn Thornton
The Curve of The Earth by Morden, Simon
The Man in the Buff Breeches by Susan Lodge
7 Days by Deon Meyer
World of Lupi 10 - Ritual Magic by Wilks, Eileen
Meek and Mild by Olivia Newport