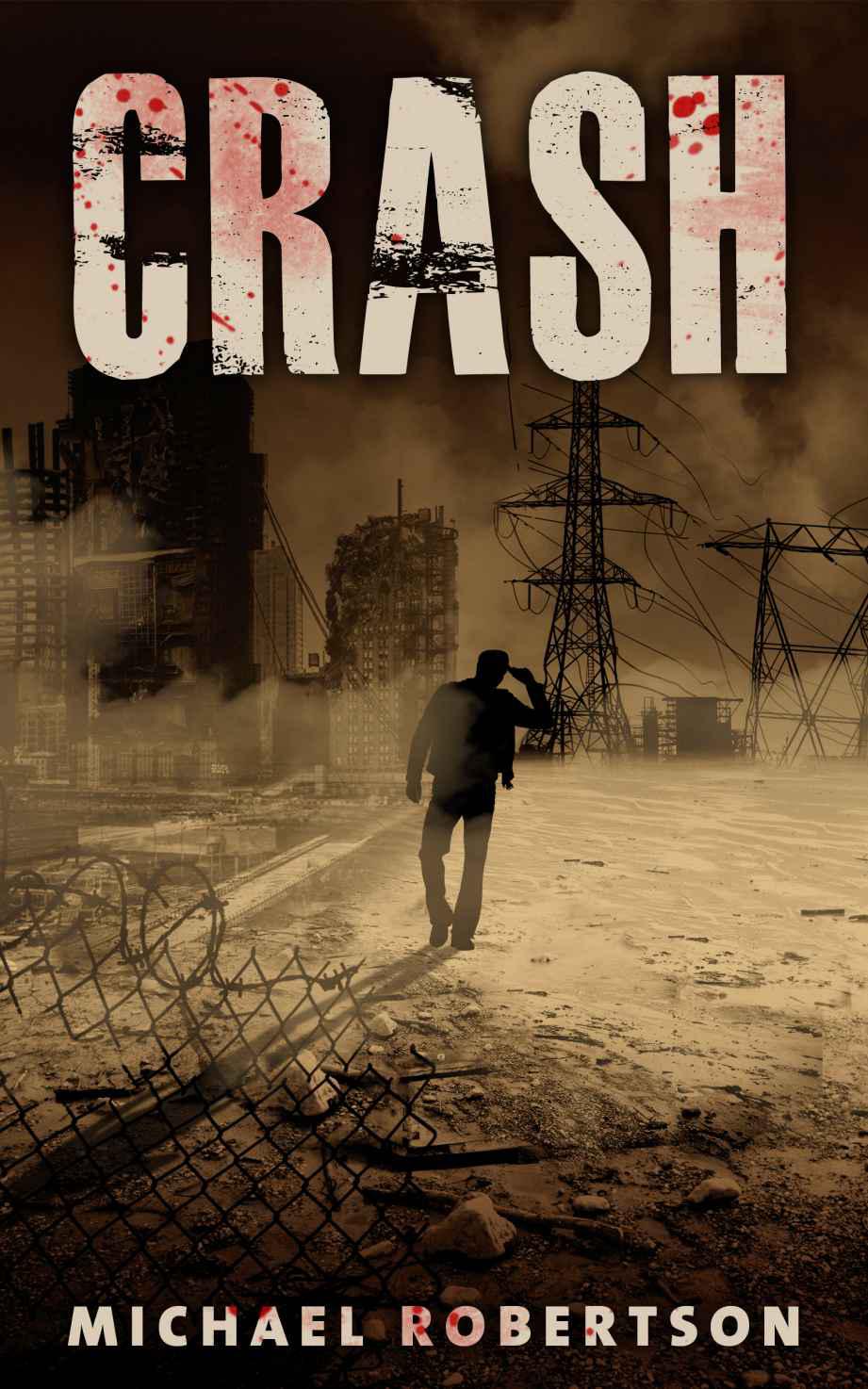 Crash
is a work of fiction. The characters, incidents, situations, and all dialogue are entirely a product of the author's imagination, or are used fictitiously and are not in any way representative of real people, places or things.

Any resemblance to persons living or dead is entirely coincidental.

No part of this publication may be reproduced, stored in a retrieval system or transmitted in any form or by any means electronic, mechanical, photocopying, recording or otherwise, without the prior written permission of the author except in the case of brief quotations embodied in critical articles and reviews.

This is a revised author's note for the updated version of
Crash
. I've left the original note below.

Some of the feedback I've received for
Crash
is about the lack of hope in this story, which is valid. It's not that
Crash
as a series has no shining light, but by judging it simply on book one, it's easy to make that assumption. With this feedback in mind, I've decided to include an epilogue. I always had this scene planned but didn't know if I should include it in book one.

Also, I wanted to explain why I've written
Crash.
I like dark fiction and frequently write horror and dystopian sci-fi, but
Crash
is much more graphic than my usual style. There are a couple of reasons as to why I chose to make it this way. Firstly, the main instigator of the violence in this book is insane. While his grievances are rational, his actions are certainly not.

Secondly, the aggression is a reflection of the venom currently aimed at the most disadvantaged in UK society. The people labelled as 'benefit scum', 'chavs', 'a drain on the system...' The current trend in the media is to blame these people for the state of the country. While this is happening, those actually responsible for the global recession are walking away with huge bonuses and getting tax breaks from our government. They've committed corporate crime on a massive scale and the capitalist system pats them on the back for it.

Crash
looks at how someone who may have felt helpless and wrongly accused, reacts when the rules change and suddenly there are no consequences for crime. It also takes the venom aimed at those on welfare, and turns it back on the group of people perceived to be the ones making the judgment of them. I say perceived because I don't believe the identity attached to a group of people is necessarily a reflection of the individuals within that group.

Looking at social constructions like economies and the interconnected nature of our globalized world,
Crash
questions if money could ever be rejected by the people it oppresses. If a system benefits the few over the many, at what point will there be a revolution? Could the actions of a small country like Greece destroy the world's greatest system of oppression?

Thinking of how to portray a dysfunctional society where there are no rules, I looked

at both war, and at places like The Democratic Republic of Congo. I am deeply affected by what's happening there, as I'm sure anyone who knows about the situation is. If you're looking for the apocalypse, it's real and it's there. 5.4 million people have died in The DRC since 1998, and that figure's still rising. The violence in
Crash
is toned down compared to what's happening in that part of the world.

Some may perceive this book as mindless and gratuitous, and that's their right. I'm not here to change people's opinions, more to explain why I've written
Crash.

Crash
is a horror story. To me, the most horrifying events in life are real and happening daily.

I love novellas, and some of my favorite stories have been told in this way.
The Body
by Stephen King, which was made into
Stand by Me
, and
I am Legend
by Richard Matheson, which inspired George Romero's
Trilogy of the Dead
, are two that instantly spring to mind. I also find that I have a lot of ideas that don't work as full-length novels but are too long for a short story. After having written
Crash
, I didn't really know what to do with it. I was happy with the story, I was happy with the pacing, I was happy with the ending, but I knew that it wouldn't find a home with a traditional publisher because of the length. This is where ebooks come in. Now I can put out a thirty-thousand-word story and let the market decide if it has a place. The digital revolution has opened up a free market economy in many industries from the music business to the comic industry, to prose work. The consumer decides, not the agent or publisher. I think this is how it should be, and I love how this has changed my life as a writer.

Crash
is book one in a series of at least eight books. I have other ideas for different series of books, and they will make it online as time permits.
Crash
is the first step of many.

If you're reading this, then you've downloaded my book. Thank you. Reviews are so important for authors, so if you feel inclined, please leave a review wherever you bought the book. If you want to keep up with my future work:

Thank you for reading, and I would love to hear from you.

To Amy, for being you. I couldn't do this without you.

To Seb, for all the cuddles.

To anyone who has downloaded this book. Thank you.

And Finally, It Begins...

No matter how old Michael got, when he cried in Chris' arms, he became that red-faced screaming baby in the delivery ward again, and Chris' instinct to protect him burned as brightly as it ever had.

Shivering by the slightly ajar window, the heating having been cut off months before, the eight-year-old boy looked at his father. He wore a mask of grief that twisted his dirty face. "Why, Dad?" He mewled. "Why did they do it? Why did they leave us?"

After running a hand through his thick and, at forty-two, prematurely white hair, Chris pulled his son closer, not only to comfort Michael but also himself. "I don't know why your mum chose to leave with your sister. Things are quite a mess at the moment, and maybe she was worried that they wouldn't get any better."

Big innocent blue eyes stared up at Chris, searching for the truth as the boy asked, "But things will get better, won't they? They have to."

Chris swallowed and looked around the room. They were in the guest bedroom. They'd chosen it because it was small and therefore easier to keep warm. With no gas and electricity, they had to resort to smothering themselves with as much bedding and blankets as they could find. They had so many dirty sheets on the floor that it was impossible to see the blue carpet beneath. The thick red velvet curtains were permanently drawn to combat the chill emanating from the windows, but they blocked out most of the light, making the gloomy room a breeding ground for depression. The entire wardrobe of each family member sat in the corner in one huge pile like a compost heap. When Chris drew a deep breath that reeked of mildew, he told his son what he believed to be a lie. "Yes, Michael, they will."

Chris knew that Michael could see straight through him. He'd have given every drop of blood and his final breath to give his son a guarantee that things would get better. But he couldn't. They currently existed in a world without precedent. Life was now a desperate struggle. Looking at the small, dirty boy in his arms, he had to swallow the lump rising in his throat and blink away his tears. "All I can really promise you..." he coughed to clear his throat, "...is that I will do my best to look after you. I will do everything in my power to..." Before he could finish, a loud crash exploded outside.

In the past, Chris would have rushed to the window if he'd heard such a disturbance. Now he was much more cautious because 'get off my land' didn't quite cut it anymore. He pulled the curtain back slightly and peered out.

The cold breeze hit him, and he flinched. Although it was winter, they left the window slightly ajar to try and let the smell of four dirty bodies out of their living space. As a result, there was more ice on the inside of the glass than the outside.

Their home was one of six large and detached red brick houses in a gated community. The houses horseshoed around a road that was wide enough to u-turn a bus in. Even looking at it now, with the overturned bins and abandoned toys, Chris could still see Michael and Matilda playing outside with their friends. The gates were made of iron, painted black, and did an effective job of keeping people out when everyone was living under the previous, if tenuously balanced, capitalist society. Back then, a gate meant keep out and was effective at enforcing its will. Things were different now. All that was left of the old social structures were memories. New rules were being established, and to survive you had to evolve. Failure to do so invariably resulted in death. With this in mind, Chris' plan to hide away like a scared fox in a hole didn't seem like such a good idea. Especially now the hounds had arrived.