Craving HIM (Serving HIM Vol. 7) 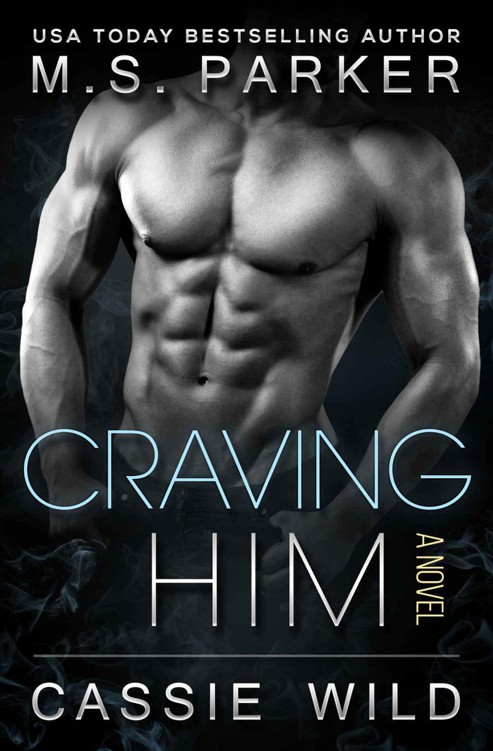 Note From The Authors:

All series from M. S. Parker

By Cassie Wild and M.S. Parker

This book is a work of fiction. The names, characters, places and incidents are products of the writer’s imagination or have been used fictitiously and are not to be construed as real. Any resemblance to persons, living or dead, actual events, locales or organizations is entirely coincidental.

When I first met Dominic Snow
, he literally saved me from falling. I never dreamed I'd end up working for him. And I certainly didn't plan on falling in love with him. We were an unlikely couple, far from conventional in his social circles, but I always assumed that if we'd made it through those first couple months, nothing could break us apart.

Twenty-one year-old Aleena Davison has it all. A job she loves and that pays well. An amazing, gorgeous man who happens to be rich and everything she could ever want in a lover.

She's put up with a lot to keep this life, but what she faces now might be too much. Can she and Dominic get through it, or will their fairy tale come crashing down around them?

Don’t miss
Craving HIM
, the hot and steamy sequel to Serving HIM.

Note From The Authors:

Craving HIM is a stand-alone novel following the events that happened in Serving HIM. It is highly recommend to read or re-read Serving HIM before starting Craving HIM. You can find the complete Box Set of Serving HIM on sale and FREE in Kindle Unlimited.
CLICK HERE TO DOWNLOAD.

Blood roared in my ears.

The need to come was so overwhelming I couldn’t think past anything beyond that pulsing ache. But Dominic had told me not to come until he gave me permission. He’d told me not to even make a sound and, beyond the harsh, heavy pants of my breath, I wasn’t. Not out loud at least. In my head, I was screaming.

He had me bound to a new toy, as he’d called it. I wasn't exactly naïve, but when I heard the word
toy,
this wasn't even close to what popped into my mind. It was a padded bench with restraints for my hands and knees—and other parts of me. When he’d handed me my collar and told me he had a surprise for me, I hadn’t known what to think.

This thing was a device of pure, sensual torture.

I couldn’t move much of anything.

I was bound to a bar by my collar and wrists. He’d bound my thighs to the raised platform and then my ankles to the cuffs on the thigh restraints. Essentially, I was hog-tied.

I might have disobeyed and screamed, except Dominic chose that moment to shove his cock between my lips. He didn't thrust all the way in and gag me, but it was enough that my body automatically struggled against it.

His little toy put me in position for all sorts of play. One of the reasons he'd purchased this particular device, he'd explained while he'd been strapping me into it.

He pulled out and I sucked in precious air before his cock slid back into my mouth, my lips stretching wide around him. Even with my head hazy from the myriad sensations coursing through me, I could still appreciate the feel and weight of him, the taste of him. I didn't think I could ever get enough.

I didn’t respond to the raw, husky purr of his voice. He hadn’t asked a question, which meant, according to the rules he set up when we started, I wasn't allowed to speak.

But when he pulled out again, he asked, “Do you want to come?”

“Yes, Sir.” I wanted it so badly, I hurt. My entire body was throbbing, pulsing with need.

“I’m not ready for you to come. What do you think of that?”

Shaking against the restraints, I pressed my forehead to the padded surface and responded, “Whatever you want, Sir.”

Some people didn't understand this sort of relationship. Hell, I hadn't really gotten it at first. Now, I loved giving over control to him. Knowing that I could trust him completely, trust him to take care of me, of what I needed, it was a relief. Granted, when my body was screaming for release and he made me wait, it didn't always seem like a good thing, even sometimes a little cruel. But I knew he'd make it all worthwhile. He always did. Always.

“Good girl.” He twisted his fingers into my dark curls and tugged my head back up.

I automatically opened for him when he nudged my mouth with the head of his cock. My tongue flicked across the top and he made a pleased sound as he slid inside. He was so beautiful. I loved that I could make him respond like that. A groan escaped me before I could stop it, but he didn’t say anything, just kept stroking the thick length in and out of my mouth, letting himself go deeper each time.

I wasn't even aware that I'd been shifting my legs, trying to press my thighs together, until he grabbed my hair again and twisted my head up so that I could see his face.

He was one of those men who would always look young, even when his golden hair was streaked with gray. He purposefully kept some scruff to make himself look closer to his age. I also suspected he liked tormenting me by rubbing his cheeks against the inside of my thighs when he went down on me.

“Are you trying to make yourself come?” he demanded.

“No.” I flexed my fingers, wishing I could grab on to something, anything, to let out at least some of this tension. “Please, Dominic. I need...” I couldn't find the words to articulate what I was feeling, but I knew he understood.

His blue eyes burned even brighter. Lust. Love. Desire. They were all there.

He disappeared from my sightline, but I knew he was still close. I felt him. His hands spread out over my hips and I gasped as he dragged my panties down. The vibration against my clit stopped and I barely managed to keep from whimpering in protest...and relief.

That was what he did. Took me to the line between pain and pleasure, and danced us across it, teaching me all of the wonderful ways he could make me scream, make me come.

He chuckled and slid his hand between my thighs, pushing two fingers inside me. I squeezed my eyes closed as I struggled to control myself.

“You’re so wet,” he said as he began to twist and curl his fingers.

“Patience.” Dominic lightly swatted my ass, his tone telling me he was more amused than annoyed at my actions.

“Dominic, please.” When I got to this point, I was never above begging.

“Keep it up and I’m going to gag you, Aleena.” There was a warning in his words, his voice taking on the authoritative sound he used when he wanted to make it clear who was in charge.

I gulped, my stomach clenching. I wasn't sure if it was dread or anticipation. He chuckled and bent over me, his body covering mine. I shivered at the feel of his skin against mine.

“Is that something else I need to introduce to you, hmmm?”

He rubbed his cheek against mine, his whiskers rough enough to burn. He straightened and I almost whimpered at the loss of contact. Six months I'd known him, and we'd been having sex regularly for four, but I still couldn't get enough of him.

When his hands caught my hips again, I curled my fingers into my palms, my body trembling with anticipation.

But he didn’t drive into me the way I’d hoped.

That was all I needed, one hard, fast thrust and I could have climaxed. No, he hadn’t given me permission yet, and if I came before he said I could...something low inside me twisted at the thought of being punished.

The thick, heavy width of his cock stretched me as he eased his way deep inside. This wasn't him being gentle with me, I knew. This was yet another of his many exquisite torture techniques. I began to shake, the need to come tightening my entire body, squeezing around him until I heard him swear. He pulled back out and paused, only the tip of him still resting inside me. Even though I knew I couldn't, I tried to move back, to force him deeper.

His fingers brushed against the seam of my ass and I made a strangled sound. Was it possible for someone to actually explode from not being allowed to come?

He pushed into me harder, faster, but still didn't give me permission. “Don’t come.”

“Please…I need it!” I pleaded, my eyes closed with the effort to keep back the tide.

“Don’t!” There was no playfulness in his voice now, nothing but pure, raw command.

Then he pushed his thumb inside my ass and I bit my lip until I tasted blood. Even that was barely enough to hold it back. The pressure inside me was pushing at the surface, desperate to escape. He thrust into me, going deeper and faster until the bench I was strapped to was rocking in time with his strokes. Air was pushed from my lungs in harsh bursts and my eyes burned with tears. It didn't seem possible that a person could feel this much at one time.

I broke with a long, low wail, my vision graying out on me.

I was still dazed when Dominic carried me to bed—the one in our bedroom rather than the one in the playroom.

As he laid me down, I tried to focus on his familiar face, but I couldn’t. My lids were heavy, and nothing seemed or felt real. Nothing but the warmth of his hands as he brushed my hair aside.

He removed the soft velvet collar and I made a low sound of protest. Some people might've considered wearing a collar degrading, but there was no humiliation or shameful aspect to the sex between Dominic and me. He'd bought the collar for me as a way of showing that we belonged to each other. I wasn't the only woman he'd had this kind of sex with, but I was the only woman he'd put a collar on. The only woman he'd ever claimed.

He chuckled and bent over to kiss my cheek. “I’ll be back.”

I half-drifted, lying there. Not really waiting for him, really, just enjoying the blissed-out exhaustion that came with this sort of complete surrender. I’d never known it was possible to feel like this, not until Dominic.

“You let me expose, touch and taste every part of you, beg me to let you come and then you blush when I clean you up?”

I opened my eyes just so I could glare at him. “That's different.”

He shook his head. “You’re mine,” he reminded me. “Mine in all ways…including mine to take care of.”

The possessiveness in his tone warmed me and my discomfort melted away. He left again and returned a moment later. I watched as he sat back down, completely comfortable in his own nudity as he lifted one of my wrists. He rubbed his thumb over the reddened area and then picked up the lotion he’d brought with him. I sighed as he started to rub the lotion in. He worked in silence, finding each place the restraints or his hands had left a mark and soothing it with a gentle touch.