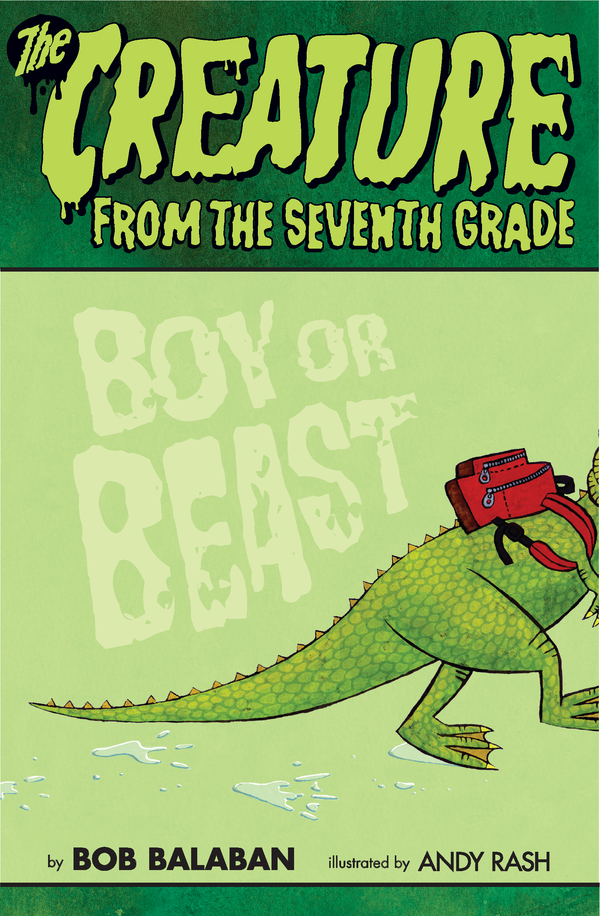 First published in the United States of America by Viking, a division of Penguin Young Readers Group, 2012

To Mariah and Hazel, my two favorite creatures

To Frank, my favorite seventh grader

Chapter 2
It's Not That Easy Being Green

Chapter 3
Rock Around the Croc

Chapter 5
The Birds and the Bees and the Mutant Dinosaurs

Chapter 17
I Smell A Rat

About the author and illustrator

THIS IS A STORY
about how something truly extraordinary can happen to the most ordinary of people (which I happen to be). Even if you lived in Decatur, Illinois (where I actually live), and were twelve years old (which I am), and the craziest thing you had ever done in your life was watch
Return of the Jedi
five times in one day (which I actually did when I was nine)âeven then, something truly extraordinary could happen to you.

Everything I am about to tell you is true. It's not “loosely based on,” or “suggested by,” or anything even remotely like that. I would swear on the lives of my seven turtles, but you probably wouldn't believe me anyway. I am still having a hard time believing it myself, and it happened to me.

Let me put it to you this way: if you suddenly became invisible and could fly and were able to teleport yourself to a planet inhabited by talking cheese balls over twelve trillion light-years away in less time than it takes to wash your hands, it wouldn't even come close to what I am about to tell you.

Before we go any further, here are a few things you should know about me: I am a seventh-grade student at Stevenson Middle School, grades five through eight. I am not exactly the most popular kid in my grade. Translation: if you rated my popularity on a scale of one to ten with one being the lowest and ten being the highest, it would be zero. Does that bother me? What do
you
think.

My big brother, Dave, is a senior at Stevenson Upper School, grades nine through twelve. He is so popular it hurts. He is tall, gets invited to everything, and was recently voted Most Likely to Succeed in the annual yearbook poll.

Dave is Chief Justice of the Student Court. He has three girlfriends. Plus he got early acceptance to his favorite college (Michigan State). And did I mention that he's really nice, isn't at all stuck-up, and is great at every sport known to man plus a few you have probably never even heard of like “Frisbee golf” and “water polo”?

Well, I'm only twelve, so I'm not all that interested in three girlfriends and early acceptance to college at this point. But other than that, do I wish I could be more like Dave? Let me put it to you this way:
duh
.

Craig Dieterly is my nemesis. His hobbies are burping, dropping water bombs, and making my life miserable. He is the president of the seventh grade (he ran on a platform of “Vote for Me or I'll Hurt You”). He's captain of everything. Football. Baseball. Soccer. The world. You name it. He is six feet three inches tall and weighs about thirty million pounds. If his brain were a state it would be Rhode Island.

Craig Dieterly has been picking on me since the day I entered Stevenson Lower School in prekindergarten. He used to terrorize me on the playground. Once he wouldn't let me get off the whirl-and-twirl and kept spinning me around until I threw up. Another time, in the sandbox, he stole my pail and shovel and refused to give them back until the head of the entire Stevenson Lower School, prekindergarten through grade four, threatened to call the police.

In homeroom our desks are in alphabetical order. My last name happens to start with a “D.” It's Drinkwater. Don't laugh. So every morning I have to sit next to this Craig Dieterly guy. We have a deal: I sharpen his pencils and do his math homework, and he doesn't steal my lunch money. Unless he feels like it. He refers to me as “Snow White's little-known eighth dwarf, âBrainy,'” when he refers to me as anything.

In case you were wondering, my full name is Charles Elmer Drinkwater. (What were my parents thinking?) I hate my middle name so much even my best friends don't know what it is.
PLEASE DO NOT TELL ANYONE.
When I was eight I tried to have it legally removed from my birth certificate, but you're not allowed to alter official records until you're over eighteen. I checked. If Craig Dieterly ever finds out my middle name is Elmer, I will have to relocate to another solar system.

Did I mention that my voice hasn't even begun to change, so when I answer the phone people still say, “Can I talk to your mother, little girl?” Embarrassing but true.

Oh, and I don't do sports. Call me crazy, but I try to avoid getting squished or maimed or humiliated whenever possible. Last year Principal Muchnick made a rule that all middle school boys had to join the middle-school football team. I told him it was my constitutional right to refuse to play a sport that could cause premature death.

Principal Muchnick doesn't like it when students disagree with him. He told me to quit bellyaching and join the team. He said it would make a man out of me. I told him I thought I was a little small to play football.

That is a gross understatement. There are beagles I know that weigh more than I did. In fourth grade I nearly blew away in a strong wind. Both feet were off the ground and I was halfway down the block by the time I managed to grab hold of a fire hydrant. Alice Pincus, the littlest girl in my class? Last year Norm Swerling dared her to pick me up and carry me to the end of the hallway outside of language lab. She didn't even break a sweat.

Needless to say, Principal Muchnick prevailed and I joined the team. My father had to order custom-made shoulder pads for me because they didn't come in my size. In the first quarter of my first and last game I caught the ball by mistake and three defensive linebackers the size of refrigerators came running after me. I was so scared I fainted before they could tackle me, and Nurse Nancy had to give me smelling salts and carry me to her office to recover. Try living that one down.

Mom always said I should drink my milk, take my vitamins, and be patient. She promised me that I would eventually go through some kind of “magical transformation” and sprout like a weed and I wouldn't have to get my clothes in the little boys' department anymore. Guess what? Mom was right.

My story begins at three o'clock in the morning one cold and windy Monday in October. It is not for the faint of heart. Don't say I didn't warn you.