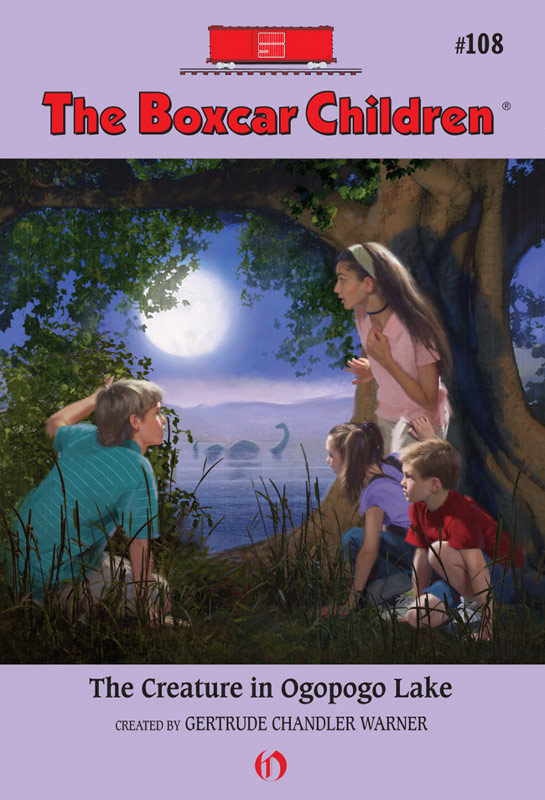 Chapter 6 Who Goes There?

“Do you think it’s true?” asked six-year-old Benny. The youngest Alden had his nose pressed up against the window of their rental car. “Is there really a monster in Ogopogo Lake?” His eyes were huge.

“You mean, Okanagan Lake,” corrected twelve-year-old Jessie, who often acted like a mother to her younger brother and sister. “Ogopogo is the name of the famous Canadian monster that lives in Okanagan Lake.”

“I like
Ogopogo
Lake better,” insisted Benny. “After all, it’s the monster’s home.”

Henry, who was sitting up front beside Grandfather, smiled back at his little brother. “There’s no real proof the monster exists, Benny.” Henry was fourteen. He was the oldest of the Aldens.

Grandfather slowed down for a curve in the road. “They’ve even used underwater cameras to search for the creature,” he said, “but nothing’s turned up. Of course, that doesn’t stop folks from keeping their eyes peeled. Everybody hopes to catch a glimpse of Ogopogo.”

“Good thing I brought along my binoculars.” Benny grinned.

“And I packed my camera,” put in Violet, who was ten. Photography was one of Violet’s hobbies. She almost always brought her camera along when they went on vacations.

James Alden and his four grandchildren—Henry, Jessie, Violet, and Benny—had just arrived for a holiday in the Okanagan Valley in British Columbia. They were on their way to the Ogopogo Resort in Peachland. Grandfather was renting a cabin from his good friend Abby Harmon.

“Should I check the map, Grandfather?” asked Jessie, who was the best map-reader in the family.

“That’s okay, Jessie. I haven’t forgotten how to get to Peachland.”

“Oh, that’s right,” said Jessie. “You used to come here all the time. Didn’t you, Grandfather?”

“We came every summer when I was growing up. My parents always rented a cabin from the Harmon family. Abby was about my age, and we soon became great friends.”

“No, we didn’t.” Grandfather smiled at his youngest granddaughter through the rear view mirror. “We’ve been pen pals ever since. After Abby’s father died,” he went on, “she inherited the Ogopogo Resort. She still rents out cabins and runs a small gift shop.”

“Abby
does
enjoy it,” said Grandfather. “But …”

“But what?” asked Violet.

“The place is getting old,” Grandfather answered. “From what I hear, it’s badly in need of repair. I’m afraid, with all the new resorts springing up everywhere, people aren’t coming to stay at Abby’s cabins.”

Henry looked puzzled. “Why doesn’t she just spruce the place up a bit?”

“Abby doesn’t have the money for repairs, Henry. In fact, she’s even been thinking of selling the resort.”

“Abby hasn’t made her mind up yet, Violet,” Grandfather told her. “But someone said he would buy it. She’s trying to decide what to do.”

“That must be hard for Abby,” Jessie said. “To make a decision like that, I mean.”

Grandfather nodded. “The Ogopogo Resort is the only home she’s ever known.”

“We kept
our
old home,” Benny said. “Thanks to you, Grandfather.”

After their parents died, the four Alden children had run away. When they discovered an abandoned boxcar in the woods, they made it their home. Then their grandfather found them and brought them to live with him in his big white house in Greenfield. He even surprised his grandchildren by giving the boxcar a special place in the backyard. The Aldens often used the boxcar as a clubhouse.

They were all enjoying the car ride as they looked out the windows and saw the beautiful green orchards and vineyards. In the distance, dry brown hills were scattered with tall trees. Benny was the first to break the silence.

“I was just wondering,” he said, sounding a bit uneasy. “What exactly does it look like?”

Grandfather seemed puzzled, but only for a moment. “Oh, you mean Ogopogo. Well, it’s supposed to be a long, snakelike creature with a head like a sheep. Some people say it’s a plesiosaur.”

“A plesiosaur,” said Grandfather. “A creature left over from the dinosaur era, Benny. It was thought to be extinct for more than one million years.”

“Has Abby ever seen the leftover dinosaur?” Violet asked.

“Not that I know of,” answered Grandfather. Then he chuckled. “Back when we were kids, we thought we’d spotted Ogopogo swimming in the lake. Turned out to be logs floating in the water.”

“Ogopogo is a funny name for a monster,” Jessie noted.

Henry nodded. “Not exactly a scary name, that’s for sure.”

“Ogopogo is supposed to be quite harmless,” Grandfather informed them. “If there
is
a monster in the lake, it seems to keep pretty much to itself.”

Benny looked relieved to hear this.

“I bet Ogopogo doesn’t like being around strangers,” guessed Violet. She was shy, and meeting new people often made her nervous.

As Grandfather slowed to a stop beside a fruit and vegetable market, Benny clapped his hands. “You read my mind, Grandfather!” he chirped. “I was just getting hungry.”

“Benny, you’re
always
hungry!” Henry teased. The youngest Alden was known for his appetite. They all got out and stretched their legs.

“I thought we’d stock up for the week,” said Grandfather as they went inside. “The Okanagan Valley is famous for its fruit.”

In no time at all, they were all busy filling their baskets. Jessie was checking out the cherries when she heard someone talking on a cell phone nearby.

“Of course, I’ll do whatever it takes!” a woman was saying, sounding annoyed. “Look, I need this sale. I won’t come in second. Not again. Not this year!”

Jessie didn’t mean to eavesdrop. But from where she was standing, it was impossible not to overhear.

“I know how to handle Abby.” The woman was talking loudly now. “I’ll get that rundown resort sold, if it’s the last thing I do!” With that, the woman pocketed her cell phone and hurried away.

After making another stop for groceries, the Aldens were soon heading into Peachland. Everywhere they looked, tourists were strolling along the sidewalks and in and out of the shops and restaurants beside the sparkling blue lake.

“The resort’s just up ahead,” Grandfather told the children. “Keep your eyes peeled, everybody. If I remember right, there should be a sign hanging from a tree out front.”

It wasn’t long before sharp-eyed Benny cried out, “There it is!” He pointed to a huge pine tree where three signs were hanging, hooked together, one on top of the other—OGOPOGO RESORT, CABINS FOR RENT, and OGOPOGO GIFT SHOP.

“Way to go, Benny!” said Jessie, as they turned into the gravel driveway. “Those signs aren’t easy to spot from the road. The paint’s all faded and peeling.”

At the end of the driveway, Grandfather parked the car beside the long grass. Everyone piled out. Benny looked over at the line of cabins nestled among the pines.

“Abby lives over there.” Grandfather nodded in the direction of a small building where a mustard-colored bench stood beneath a large plate-glass window. The sign above the door read: OGOPOGO GIFT SHOP.

Benny raised his eyebrows. “Abby lives in a
store
?”

“She has a small place in the back of the shop, Benny,” Grandfather explained, as he led the way across a lawn covered with dandelions. “Let’s go say hello.”

As they stepped inside, a bell jingled above the door. A woman looked over as she tucked her short silver hair behind her ear. Her face broke into a smile as soon as she saw her old friend.

“James!” She rushed out from behind the counter. “It’s been so long!”

“Much
too
long,” said Grandfather, returning his friend’s warm hug. “Abby, I want you to meet my grandchildren—Henry, Jessie, Violet, and Benny.”

They all shook hands. “It’s very nice to meet you,” Jessie said politely, speaking for them all.

Benny glanced around. “You sure have lots of Ogopogo stuff in here.”

Violet followed Benny’s gaze. Everywhere she looked, she could see the famous monster on everything from posters to T-shirts.

Abby laughed. “That’s our claim to fame around here, Benny. Peachland is known as Ogopogo’s home.”

The four Alden children looked at each other in surprise. “Ogopogo lives in the town?” Benny asked in disbelief. “I thought he lived in the lake.”

“Actually, he lives in an underwater cave just across the lake from town,” Abby replied. “At least, that’s what they say.” She pulled a set of keys from her pocket. “I was just about to close up shop. Why don’t I walk you over to your cabin?”

“Sure thing.” Grandfather gave her a cheery smile.

“By the way,” Abby said, “how does a picnic supper by the lake sound? I’m planning a get-together tonight.”

Grandfather thought it sounded great. So did everyone else.

“I chose the cabin at the far end for you,” said Abby. They followed a stone path that looped its way around the gift shop. “I’ve been airing it out, but … I’m afraid it still smells a bit musty in there.”

Grandfather waved that away. “I’m sure it’ll be just fine, Abby.”

Benny, who had raced ahead, suddenly called out from the cabin porch. “Come and see this!” He sounded excited.

“What is it, Benny?” asked Henry, taking the steps two at a time.

The youngest Alden pointed to a large wooden carving of a green, snakelike creature with a head like a sheep.

“There’s an Ogopogo carving on every porch,” said Abby, coming up behind them. “Patch O’Brien was quite an artist.”

“His real name was Patrick O’Brien,” Abby explained. “But Patch always suited him better.” She paused for a moment. There was a faraway look in her eye. “I don’t think I ever saw my old friend in anything but patched-up clothes.”

“Oh, I get it.” Benny nodded. “Patch was his nickname because he wore patches.”

“Yes—exactly,” said Abby. “It’s been a few years since he passed away,” she added. “But I still miss him.” 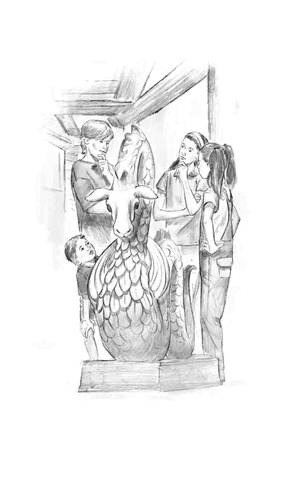 Violet didn’t like to hear the note of sadness in Abby’s voice. She was trying to think of something cheery to say when Jessie spoke up.

Walking into the Ocean by David Whellams
Homicide at Yuletide by Henry Kane
Visions by James C. Glass
A Start in Life by Alan Sillitoe
The Stone of Farewell by Tad Williams
Scare Me by Richard Parker
The Infinity Brigade #1 Stone Cold by Andrew Beery
On the Plus Side by Vargo, Tabatha
The Winter Sea by Morrissey, Di
The Christmas Proposition by Cindy Kirk