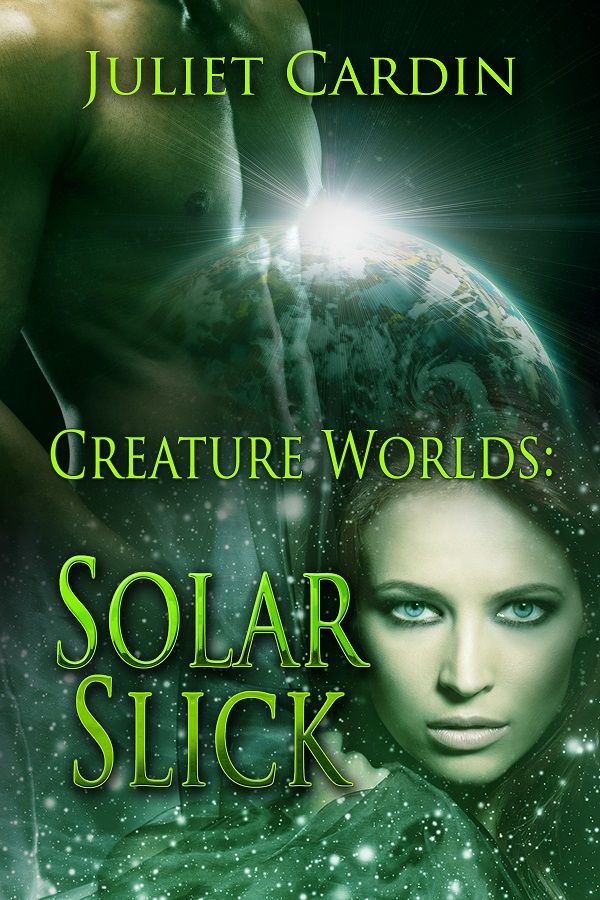 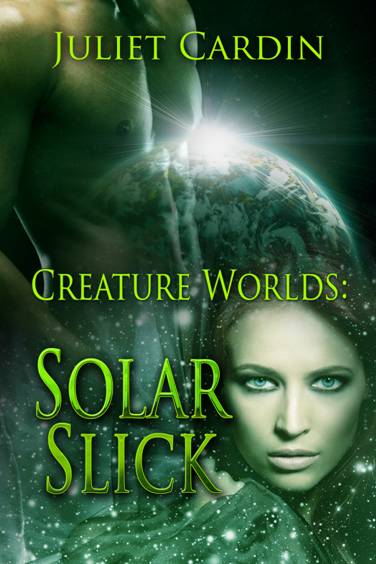 Other Books by Author Available at Torrid Books:

What did a girl have to do to get a little action around this place? In about thirty seconds my drink would be finished and I wasn’t about to order another one. This was a colossal waste of time. Not to mention money. The price of three lousy drinks set me back almost a day’s wages. In fact, the price of everything on this God forsaken planet was outrageous. How I longed for Earth. For days filled with unending excitement and tranquil nights, wrapped in a lover’s arms. I missed my home and it’d be another month before I could even think of going back.

Things should blow over by then.

It was that green dude again. How many times was he gonna pass my table and stare at me with those yellow reptilian eyes of his? The sad thing about it, he was probably the best looking male in the place. The purple guy had gotten a little sexier halfway through my second drink—but not much. The green dude was still better—at least in the dim light of the bar. The yellow guy looked like he was packing a huge one in those wide pants of his, though you never really knew. One time I’d brought home a yellow guy—a different one—and I’d thought the same thing about him. I’d been sorely disappointed when I got down on my knees and saw him up close. I’d called him peanut the rest of the night.

Looking around the bar was like looking at all the colours of the rainbow. Blue had been decent, except he cried afterward. The pink guy did have a big one, if he only knew where to put the thing.

Yep, I was rolling the dice on green.

“Hello, yourself,” I said, treating him to one of my enchanting smiles. Before I could even ask, he sat down in the seat across the table from me. I finished off the last swallow of my drink and drilled him with a direct look. “You wanna get out of here?”

“Sssure,” he hissed, not at all startled or put off by my abruptness. His long lizard tongue flicked out in excitement.

My apartment was just a few blocks away from the bar so we got there in record time. I poured us a drink and made an attempt at small talk. “You come inside the dome much?” I asked.

“Yes.” He stood looking out the living room picture window at the huge city twelve stories below. “Nice view.”

“Thanks.” I handed him his drink and took a long swig of mine. “What’s your name?” I guess I could have asked that sooner. He was pretty hot, now that I saw him in decent light. And tall; at least six foot four, broad, and muscular. Though his body was green, his hair was white, long and straight, just touching his shoulders.

He contemplated me for a moment. “So, Minka, what brings you to Treox?”

If he only knew. “Change of scenery,” I lied.

He raised an eyebrow but didn’t challenge me. Why anyone in their right mind would come here was beyond me. I knew Tigg was a Lizord, native to the planet. Outside the dome he would find the humid, melting hot weather agreeable, and the overgrowth of vegetation and giant insects ideal for life—his life. People from Earth and other planets, however, cowered beneath the giant domed cities that dotted this puny, deplorable planet.

“So you work inside?” He had on the typical two-piece jumpsuit required to be worn by inhabitants when they entered the dome. Outside they could wear whatever they wanted, which was probably nothing. Since it was the end of the week, I figured, like me, he’d probably just finished a shift. I worked in one of the big stinking processing factories. Treox was a veritable goldmine when it came to natural resources. Even the plants and precious stones were highly sought after on several planets. The way things were being harvested this place would probably become like the old rainforests of Earth—extinct.

“Yes. Both, inside and out.” He stared at my tits and smiled. My outfit was almost the same as his. Despite being boring, the fabric was light and breathable, yet durable. Most Lizords worked outside, gathering plants and mining stones. Some did work inside, slaving away in the factories, just as I did.

“Haven’t seen you around,” I said. There were about three or four factories in each dome, so it wasn’t unusual.

He shrugged. I noticed he’d finished his drink and mine was almost gone as well. “Want to see my room?” Guess it was time to find out what he was packing.

Though he only nodded, his tongue flicked out again, so I knew he was interested. I led the way down the hall to the one puny bedroom in the rat hole I called home. To be fair, my place wasn’t as bad as some I’d seen, though it was still a far cry from what I’d been forced to leave behind. A vision of Clay’s face flashed in my mind, but I forced it back, refusing to dwell on past events that would only piss me off. Especially when I was about to get laid. There’d be plenty of time afterward—when I lay awake half the night staring at my peeling ceiling—to hash out past mistakes.

Other than the double bed sitting in the middle of the scuffed hardwood floor, and an ancient dresser with a cracked mirror, the room was empty. I stopped before the bed and turned around. Tigg ignored the shabby furnishings and came up before me. I smiled at him as he put his arms around me and pulled me close, lowering his head for a kiss. Though it felt good to be held in strong arms again, it felt weird kissing him, in an erotic sort of way. His long tongue darted into my mouth in quick little flicks. A gentle hand caressed my back, working its way to my ass, while the other hand reached up to entangle in my hair.

Despite enjoying this tender loving, I couldn’t wait to get him between my legs. For me, the days of emotional fucking were over. No more would I love a man body and soul, memorizing every inch of him, craving his touch.

Now I was all about satisfaction; hot, hungry, frantic lust, and putting out the fire. Just the thought of Tigg’s tongue on my clit got me wet and I began to tug at his pants. I was anxious to see his cock. I’d heard rumors about Lizords and I wanted to see if they rang true.

I dropped down to my knees, gripping his waistband in my hands. The visible outline of his cock seemed amazingly large. His hands were in my hair, tumbling the bright red strands over his webbed fingers. It took little effort to pull his pants down around his ankles, then all that stood between him and me were the snug undies his kind were forced to wear along with the uniform. Lowering those, I couldn’t contain a gasp of surprise and delight.

Lizords did have two cocks.

Both were a deep green in color, rock hard, and ready for action. One thick cock protruded directly over top the other one. Optimal for double fucking.

I looked up at Tigg and smiled.

Taking a cock in each hand and putting my lips from one glistening tip to the other, I thought,
finally
, this planet has something decent to offer.

Tigg groaned as I took turns sucking first one cock then the other deep into my throat. He opened his legs wide, bent his knees and pushed his hips forward giving me full access to his body. His two balls were big and green and completely smooth. In fact, other than the hair on his head, his body was hairless. I cuddled his ball sack in one hand and gripped the cock that was in my mouth.

I’d heard that Lizords would fuck anything, but favored Earth women most of all. By the end of the night, I was determined he would covet us forever. After I tongued him for a few minutes, Tigg reached under my arms and lifted me back onto the bed. I pulled off my shirt and bra and lay down to let him pull off my work pants and panties. He tossed my clothing aside and kneeled down before my open thighs.

Lightning fast he came at me, his tongue flicking against my clit like a soft little whip, fierce and determined, making me writhe and shiver with need within seconds. My legs came up over his broad shoulders and I arched my hips in welcome. One of his webbed fingers dipped into my pussy while he laved attention on my clit. A second finger slipped inside of me, making me come undone.

Head thrashing side to side mindlessly, I gripped his silky mane in my hands. “Please!” I begged shamelessly.

“You will take both my rods.”

It wasn’t a question, I realized, as he flipped me over onto my belly. Both of his ‘rods’ pushed up against my openings. Though Clay had been the only one to ever fuck me in the ass, I was anxious for Tigg to have me. Never had I experienced double penetration and I was both excited and a little nervous. Tigg was big. Bigger than Clay.

Dream With Me (With Me Book 4) by Patrick, Elyssa
Saturday's Child by Dallas Schulze
Outside by Nicole Sewell
Rapture: The End-Times Error That Leaves the Bible Behind by David B. Currie
War-N-Wit, Inc. – Resurrection by Gail Roughton
Childish Loves by Benjamin Markovits
Cowboy Crazy by Kennedy, Joanne
Encounters 1: The Spiral Slayers by Rusty Williamson
When Good Earls Go Bad: A Victorian Valentine's Day Novella by Megan Frampton
Pool Boys by Erin Haft