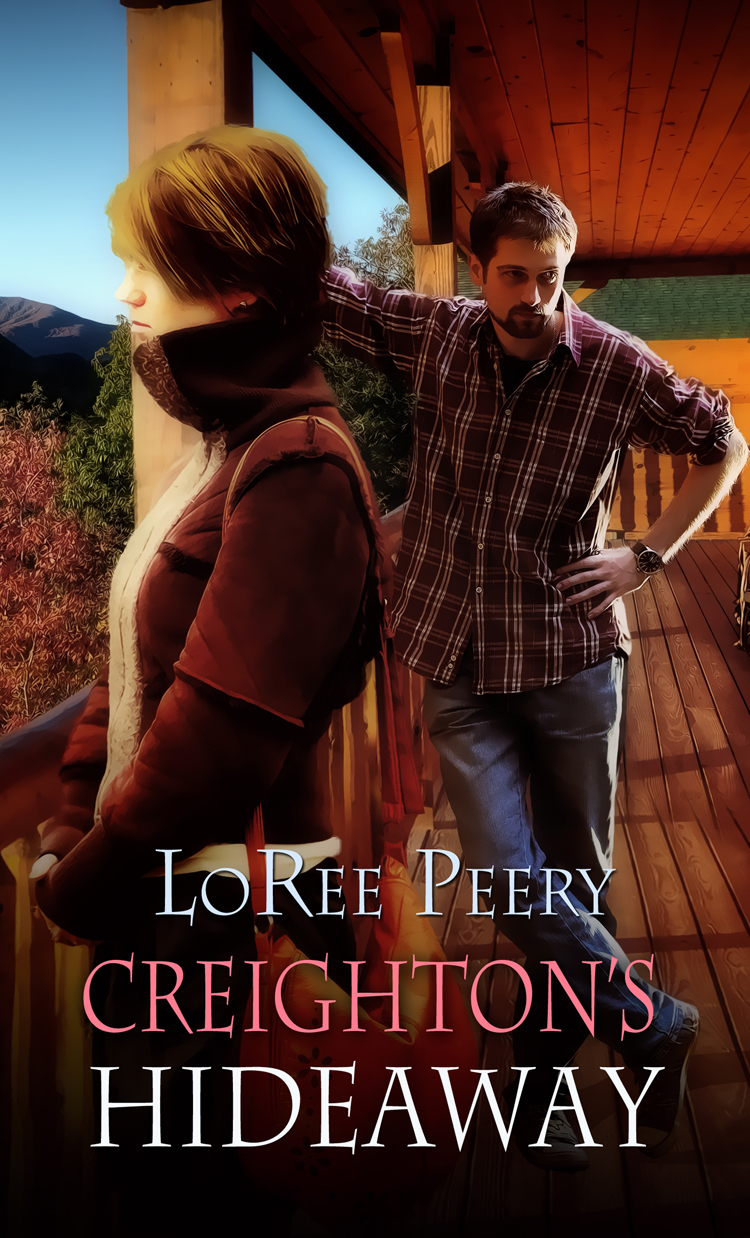 Dedicated to my Aunt Violet Ingram. You are a gift to all who know you. Thank you for providing a safe haven, what I once referred to as my waiting place. “May your children rise up and call you blessed.”

And to all farmers and ranchers who have been saddened by native pasture tilled under for corn.

“After reading
Found in the Woods
, I am now a fan for life! LoRee Peery does an awesome job of weaving a story of faith, trust, love, and overcoming fear into characters that you care about in a book that you will not be able to put down.

I tuned everything out while reading this book, realizing that time had passed as I was lost in the pages. Why is “Do not be afraid” the most repeated command in the Bible?

â¦The twists and turns in this story will take you on a journey of overcoming paralyzing fear by faith, trust, and love. This book is for anyone who has experienced fear and anyone who loves a great Christian romance. I cannot wait to read more by this author!”~Sally Shupe

I lift up my eyes to the hillsâwhere does my help come from? My help comes from the Lord, the Maker of heaven and earth
.âPsalm 121:1-2

“Hi. I'm Creighton. Welcome to my little hideaway, Shana.” His full lips spread in a wide smile of greeting, exposing brilliant teeth in his sun-darkened face.

She searched the deep-set hazel eyes that crinkled at the corners, fitting numerous descriptions into a first impression. “Rita has talked about you so much that I think I know you already.”

Creighton's open countenance invited a more enthusiastic response, but she was taking in the scenery. He belonged in this setting, as solid as the cottonwoods. Wholesome and handsome and strong, all wrapped together in one package.

“All good stuff, I'm sure.” Creighton leaned into the window and winked at his sister before locking his gaze on Shana. He withdrew and opened her door.

It was rude to stare, but she had been slow to move her gaze from the healthy face of her benefactor, let alone climb out of the vehicle. Shana blinked against the bright sunlight he'd been blocking.

For some reason she had expected him to be anti-social rather than open and inviting. Yet it took her a few more seconds before she could break eye contact with this man she'd be living so close to.

Their gazes reconnected and something indescribable transpired.

All it took was one nanosecond and she felt as though they'd known each other forever. She blinked for clarity of thought and gazed off into the distance of an endless stretching sky. She took a quivery breath, turned back to face him.

Focus on why you're here.

Was she really about to do this? Stay on a ranch with a man she had never met before? Way out in the boonies of northeast Nebraska? Of all the places, she'd never imagined herselfâ¦

She retrieved her purse and climbed out. Then she faced him again. “Creighton, this is so good of you. I really didn't know where to go so I could concentrate on my thesis, away from work and ringing phones and the troubles of others. Rita has suggested more times than I can count for me to vacation up here. It looks perfect.”

“You'll soon wonder why it took you so long. Timing, I guess.” He reassured her with another smile. Creighton turned from Shana to Rita. “Besides, I owe my baby sister a thing or two.”

Shana stepped away to give the siblings a moment. She stretched out the kinks, and gazed off. She didn't see much except clouds moving in, changing the blue expanse to white. She could deal with finishing her thesis. She had a couple weeks to pull it all together.

Creighton found it hard to pull his gaze from Shana, trying to remember everything Rita had mentioned about her. The freckles were a surprise. Her large, blue-green eyes were stunning.

“Creigh,” his sister's voice drew his attention as he headed her way. “I said, Shana will need a day or two to acclimate. She's a terrific program manager, usually so in charge of what's going on that nothing shakes her. But this ultimatum to get her degree came like a jolt out of the blue.”

“I thought she'd been working on her degree since she started as the director.”

Rita cradled the small roundness of her abdomen. “True. But she had planned on another semester to pull it all together. Upper management decided it was a good chance for her to use some vacation time and get that paper finished now to secure her job before it goes to someone hungrier.”

Creighton pulled Rita close and enveloped her in a hug.

Rita mouthed against his chest, “I think peace and quiet will do her a world of good.”

“If you say so, little sister.” Creighton pulled the end of Rita's long braid in a gesture that went back to their childhood. “The timing is perfect since most of the cabins are empty. End of summer, before hunting season.”

He slanted a look across the hood of the SUV.

Shana's thoughts must be far away. Was she as lost as she appeared to be? She looked small, but he sensed her strength was cloaked in vulnerability.

“You've been away too long, kid,” Creighton said to Rita. “Next time I see you, I won't be able to get my arms around you!”

Rita punched his upper arm as they stepped apart. “Then I'll expect you to hug the baby, Bro.”

He gave her focused attention. “You're doing OK? You and the baby and Ray?”

“Couldn't be better. The Lord blesses us every day. How about you?”

“Have to agree and say He blesses me beyond words. Don't know where I'd be if He hadn't brought me back to the ranch.”

“I thought of you when Shana said she was pressured by our boss, and we were so close following our sessions at Hope Circle, we just had to come see you.” Rita glanced at Shana and lowered her voice. “Can you check on her for me? When she starts working on a project, she often forgets to eat.”

Shana shot them a wistful smile and spoke to her feet, “You've done enough talking about me. I'm right here.”

“Right as usual, boss,” Rita quipped. “Guess it's time to get back on the road. Ray's probably had enough of his mom, so I'd better head down to Norfolk.”

Shana left her side of the vehicle to face them, leaning against the fender.

“Wish you could stay, Sis. Will you spend the night there, or go back to Lincoln?” Creighton reached in and grabbed all of Shana's bags.

“This round belly needs its own bed, so we'll eat a bite and head on south. I promise, after the baby comes, we won't be such strangers to this wonderful ranch.”

When the women shared a warm embrace, he surmised that feminine tears threatened to surface.
That's all I need around here, a bawling woman.
He watched them draw apart, avoiding eye contact.

“I suppose the next time I see you, you'll be waddling like a duck,” Shana's obvious attempt to lighten the moment came out rather flat.

“In two weeks? Dream on. You do your writing but don't get so carried away you neglect taking in the ambiance of this land. That tiny cabin will drive you nuts in a couple of days! There's not enough inside to sort and rearrange. So go out and enjoy nature. That's an order.” Rita laughed.

“Tease all you want. I have plenty of interviews to tie together. In all seriousness, Rita, thank you for everything. Going to O'Neill with me, and bringing me here.” Shana waved an arm in front of her, indicating the expanse.

He could get used to the soft cadence of her voice. Keeping his eyes on Shana, Creighton longed to discover if those short dark curls were as soft to the touch as they looked. He guessed they were natural and he suspected she was a shampoo-and-go kind of gal, not one to fuss over her appearance.

And she didn't have to. He found her stunning.

“Nonsense,” Rita sputtered, and turned from another quick hug. “I profited as well as you, sitting in on those group counseling sessions. For now, you'll love it up here and it'll do Creighton good to have you around. I've wanted you two to meet for a long time.”

“Well, little sis, your wish has been granted.” Creighton tugged Rita's braid again while holding the door open. His expression went serious when he swung it shut. “Drive safe, you're carrying my nephew, you know.”

“Or niece.” Rita waggled her fingers and put her vehicle in gear. “Bye, you two.”

Shana shoved her hands deep into her pockets. It seemed to Creighton that she shrank into herself. He studied her as much as the SUV turning onto the blacktop.

What had he gotten himself into this time? Big brother always there to help his little sister. He took one last look towards the road and caught a flash of sunlight as it glinted off Rita's windshield.

Creighton turned back to Shana. “Let's get you settled.” He raised his voice as he strode towards the garage and disappeared around the corner, “The cabins are through the pasture. There isn't a road down to the creek.”

Shana's eyes rounded when he rolled out his four-wheeler. He hoisted up her big bag and set it on his lap while swinging onto the seat. Creighton turned the key and said over the thunderous motor, “Grab your smaller bags and climb on.”

“You're safe with me. I'd even give my pregnant sister a little ride. Just cozy up and hang on.”

Shana looked straight ahead as she awkwardly found her seat. She reached for her things, then squirmed until she balanced a canvas tote on each thigh, holding herself erect.

He sneaked a glance over his shoulder and almost laughed when she squeezed her eyes shut. He felt her body slump against his back and again questioned his generosity.
Savior of little lost creatures. That's me.

He put the four-wheeler in gear, thinking he'd save the grand tour for another time. It was a short ride through the windbreak. What did Shana notice as they wound down the hill towards the creek? For some unknown reason, he wanted her to be impressed with his carpentry as well as God's nature. He was proud of his cabins. Proud of all the work he had done with his bare hands and a lot of time.

Creighton redirected the boasting thoughts. He couldn't brag about anything he'd done. God Almighty deserved the credit for whatever changes had been made on the ranch, as well as in his life.