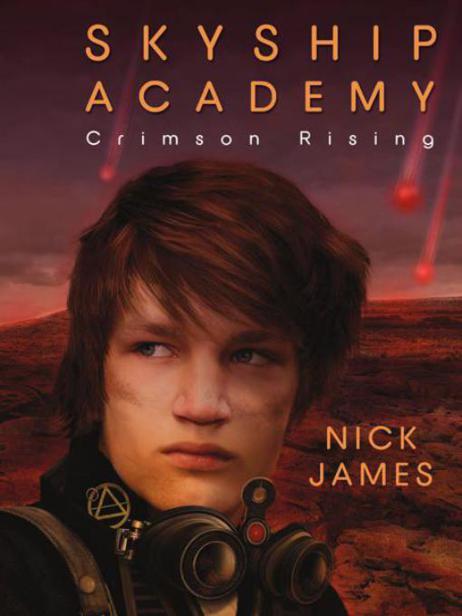 Skyship Academy: Crimson Rising
© 2012 by Nick James. All rights reserved. No part of this book may be used or reproduced in any manner whatsoever, including Internet usage, without written permission from Flux, except in the case of brief quotations embodied in critical articles and reviews.

Summary: When fifteen-year-old Jesse manages to smuggle onboard the Academy a mysterious red Pearl, a fragment of space debris that is a dying Earth's most important energy source, he sets forth a destructive chain of events.

This is a work of fiction. Names, characters, places, and incidents are either the product of the author’s imagination or are used fictitiously, and any resemblance to actual persons, living or dead, business establishments, events, or locales is entirely coincidental. Cover models used for illustrative purposes only and may not endorse or represent the book’s subject.

Printed in the United States of America
1

A sideways hailstorm of bullets sliced through the air. Cassius Stevenson had only a split second to jump from the rooftop before being hit.

No time for hesitation.

Bounding onto the outside ledge, he pushed forward and leapt.

Mid-air, one of the bullets ripped through the shoulder of his jacket, nicking his skin and forcing his left side forward at an awkward diagonal. A sharp pain tensed his arm. It wasn’t enough to fracture his concentration.

The second rooftop approached quickly, nine yards below the first. He tucked his legs and prepared for impact.

The moment he hit the ground, the entire surface caved in.

Planks of rotten, damp wood cracked and exploded, sending a cascade of splinters into the air. Slum rooftops. Some were reinforced, some were as thin as cardboard. He should have known.

The building’s top floor was sturdier. His thigh smashed into the ground first, followed by the rest of him. A jolt of unfettered pain spread through his body, meeting the sharp throb of his shoulder. It was all he could do to keep from shouting.

There was no telling how many of them were outside. Even if they hadn’t seen him jump, they’d notice the massive skylight he’d carved out.

He shouldn’t have upset the Locusts. Slum Lords were nasty individuals at the best of times. Tick one off and you’re as good as dead. Cassius wasn’t here to tussle with the locals. But the tussle seemed to find him, regardless of his intent.

Fight to stay conscious. That was the trick now. Black out and it was all over. He couldn’t defend himself if he couldn’t move.

He clenched a fist, mostly to see if he could still do it, and allowed his legs to spread onto the ground as he rolled onto his back.

A hoarse cough soon became a heave. Chunks of wood and insulation rained from the decimated ceiling, lowering the visibility to a thin haze.

Beating his chest to knock the breath in, he pushed himself back against the floor.

The rest of the rooftop came down. Large slats of wood cut into the floor like guillotines, crashing around him. Random intervals. Random landing spots.

Cassius flipped over, making himself as small as he could, keeping his head low and covered as the clatter of wood became a deafening wall of noise. Small pieces hit his back. Nothing big.

Please, he thought. Nothing big. Broken skin was fine. Bruises were better. Punctures? A full-on plank through the body? There was no recovering from that.

He felt his fist warm, skin sweating. He had fire inside him. He could burn the entire building down if he wanted, but what would that accomplish? He’d come up to Canada’s Polar Cities to escape, to blend in. After what he’d done back in America—destroying a government building, betraying his commander—he knew the Unified Party wouldn’t let him get away unscathed. Setting a city block ablaze would likely result in the kind of news item that could make him findable.

He forced himself to dismiss the past and focus on the present. He didn’t know exactly where the Unified Party was looking for him—hopefully south of the border, far away—but the Slum Lords? They were here, and they were just as serious.

Shadows descended on the walls of the room, followed by heavy thumps as feet hit the floorboards. Then came the clicks of artillery. When Cassius pulled himself to a sitting position, he was greeted by a firing squad.

They stood in a semicircle around him, faces obscured by the dust in the air. They’d landed on their feet, decreasing pain and recovery time. Cassius cursed under his breath. How must he look, cowered on the floor, presenting himself willingly to these men? The thought of it sickened him. It couldn’t end like this. It wouldn’t.

The slum lands, even this far north, were a dangerous place—the Slum Lords even more so. They lived for this kind of thing, employing plenty of paid assassins, happy to carry out the dirty work.

All it had taken was a wrong turn that morning. Fate could have steered him toward any alley in the city, but Cassius had to stumble right into a local gang skirmish. Locusts versus Hoods, brawling over a deal gone bad. There were children involved, forced to the ground. Bargaining tools. Cassius had no choice but to get involved. It was none of his business, but he could hardly stand by and watch innocent kids be murdered.

His results? Two unconscious Locusts and a horde of new enemies. Fast, resourceful ones. Cassius had trained with the best Unified Party soldiers back home, yet here he was. On the floor. Disarmed.

The semicircle of slum assassins advanced as one unit. Cassius swallowed. His fingers scratched at the dirty floor. A trickle of blood dripped from the wound on his shoulder. The room was abandoned. That was at least some consolation. No one to get hurt. No one to watch.

“Anything to say for yourself?” The nearest man spoke. Cassius coughed. “If your crappy roof would’ve held—” A gunshot interrupted him. He flinched, only to realize that the bullet had slammed into the wall several feet from his right shoulder. The assassins laughed, enjoying the show.

“We don’t actually want to hear you voice.” The man sneered.

Cassius grit his teeth. This was it. He didn’t have a choice.

It was fire. Fire or die.

He closed his eyes, just for a second. He’d have to fight through the pain to summon it. The flames were buried inside him, constantly held at bay ever since his power had been triggered four months ago. It had been nothing but trouble so far. It was time to project that trouble onto someone else.

The assassin moved forward, close enough for Cassius to see his pleased expression. Long, scraggly hair framed a pockmarked, sweat-dampened face. A pair of beady black eyes appraised him like he was a hunk of meat. An animal waiting to be put out of its misery. A trophy.

“You don’t stick your nose in Locust business and live to brag about it.”

“The kids,” Cassius started, fire generating inside him. “They were going to be killed.”

“That’s slum life for you. No reason for an outsider such as yourself to get involved. You don’t belong here.”

The barrel of the gun rose, aimed directly at his forehead. “Then I’m doing you a favor.”

With a grunt of pain, Cassius pushed his fist out in front of his face and unclenched his fingers. Sparks danced along his skin, igniting into small flames. The assassin’s eyes widened.

He hadn’t seen anything yet.

The flames snaked into the air, twisting and winding until they formed an impressive torrent. Cassius winced. It took energy to control it like this, and he had precious little.

The rest of the guns cocked. Cassius’s fingers spread.

A flurry of gunfire erupted. The fame extinguished as Cassius was forced to pull back, shielding his face.

The deafening ring of gunshots blocked out any other senses. For the first few seconds, he was convinced he was a goner. He’d taken shots before, but never more than one at a time. Was this what it felt like to be the victim of a firing squad? So thoroughly gutted that he couldn’t feel a thing?

Bodies fell in front of him, hitting the floor with a dull thud. Cassius watched in horror as the men fell still. They’d never had a chance to fire. The gunshots had come from outside, somewhere on the roof. Somebody else had attacked them.

Another Slum Lord? A local police squad? It didn’t matter. It gave him a chance. He could still escape this.

He tried to stand, and fell. A second pained effort brought him to his feet. He staggered back, hitting the wall. He needed to rest.

Everything was silent. The air began to clear.

Maybe he’d take one of the assassin’s guns. He wasn’t confident that he could conjure anymore fire.

Before he could move, something caught his eye. He watched as a metal sphere, small enough to hold in his hand, dropped from the hole in the ceiling and hit the ground. It rolled toward him a few feet before stopping.

His stomach lurched. Panic flooded his heart. He recognized the weapon instantly. He’d used then dozens of times in training. Every Pearlhound knew what a Unified Party-issue gas bomb looked like.

Unified Party. This couldn’t be a coincidence.

“Not now,” he muttered to himself. “This isn’t happening.”

A tiny red light began to blink on the surface of the bomb. It would only pulse faster until the thing exploded and knocked him out for good. Seconds. Less than.

Pushing against the wall, he moved sideways until he found the closest door. He pulled on the handle in a blind panic, moments before the bomb exploded.

Expecting to enter another room, the sudden drop took Cassius by surprise. The planks beyond the door had been removed, leaving nothing to support his body. He fell to the next lowest level of the building, a narrow landing attached to a rotting staircase.

Half running, half rolling, he tumbled down the stairs. Gas seeped through the open doorway above him, slowing as it dissipated into the large open space.

When he finally reached the bottom, he dragged his bruised and battered body toward the nearest exit and slipped outside, desperate for fresh air. He took a deep breath and stumbled forward, all the while repeating the words in his head.

There was no way a Slum Lord would’ve gained access to a gas bomb like that. Not this far north. It was government-issue, no doubt. Even in his weakened state, he couldn’t forget something as obvious as that.