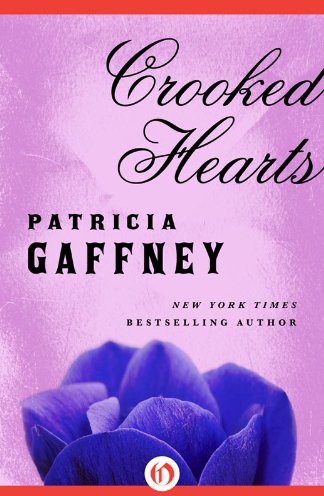 A Biography of Patricia Gaffney

For Jon, who still makes me laugh. Sometimes intentionally.

A Biography of Patricia Gaffney

And it was hot, hot, hot in the airless stagecoach, which needed new springs. The cowboy sprawled unconscious on the opposite seat smelled like an old drunk rolled up in an alley. How could the blind man sitting next to him stand the stench? They said blindness sharpened the other four senses; if that was true, the poor man must be half dead from the fumes.

A cold beer and a pillow for her behind, that’s what Sister Augustine needed. Stirring furtively on the leather seat, she tried to shift the derringer without fidgeting; it must’ve slid to the back of her garter, because it felt like she was sitting on it. “Be careful with that thing,” Henry had warned her; “don’t shoot off anything important.” If she could just get her hand under her thigh for two unobserved seconds, she could move the damn gun. The blind man sure wouldn’t see her, and neither would the smelly cowboy. She slanted a glance at the fourth passenger, seated next to her. He’d been dozing a few minutes ago.

But now he was lying in wait to catch her eye. “Sister,” he greeted her, with a big, friendly smile. “Mighty hot for early June, wouldn’t you say?”

After three weeks on the road, Sister Augustine recognized his type, because there was one on every stage, train, or ferry boat she’d taken since leaving Santa Rosa: he was the one who wanted to talk. A whole hour of silence had gone by since the stage had left Monterey, so this one must’ve decided he’d waited long enough.

“Indeed I would, sir,” she answered smartly. “But remember the psalm: ‘With the Lord as thy keeper, the sun shall not smite thee by day, nor the moon by night.’” Sometimes, she’d found, you could head a talker off at the pass by going straight at him with the Bible.

“So true. And don’t forget Matthew: ‘He maketh the sun rise on the evil and the good, and sendeth rain on the just and the unjust.’”

She nodded in devout agreement, stumped.

“George Sweeney’s my name,” he said, sticking out his hand.

She gave it her nun’s shake, limp but fervent, and murmured, “Sister Mary Augustine,” while inside she rejoiced. Sweeney—Irish—
Catholic!

“The Blessed Sisters of Hope. We’re a small community; our mother house is in Humboldt County.”

“You’re a long way from home, then.” He leaned toward her and jerked his head sideways at the snoring cowboy. “Is it safe for you to be traveling all by yourself?”

“I don’t, normally,” she confided. “But my companion, Sister Sebastian, fell ill in Santa Barbara and wasn’t able to go on. After we determined that she would recover without assistance, we decided that I should continue our work alone. We believe it’s God’s will, and we have absolute faith that He’ll protect me.”

He sat back admiringly. “Well, I don’t doubt it for a second.” He’d taken off his derby hat in her honor, a generous gesture since it had been hiding his bald spot. He was short and plump, and his little feet in their shiny patent-leather shoes barely touched the floor. She’d pegged him earlier as a traveling salesman because of all the luggage he was carrying, stacked over their heads on top of the Wells Fargo stagecoach. Now, studying him more closely, she decided he looked too flush for a drummer, and too clean. All the better. And praise the Lord, his name was Sweeney, which automatically doubled her estimate of his donation potential.

“What is your work, Sister, if you don’t mind my asking?”

Easier and easier. She clasped her hands to her breast with subdued fervor. “I’m on a fund-raising mission for our order, sir. We desperately need money for one of our hospitals in Africa, because it’s in danger of having to close—which would be a catastrophe. We’ve been collecting donations from the dioceses throughout the state for several weeks now. I’ll be going home after one last effort in San Francisco. After that, I hope to be sent to Africa myself, where my true skills can be put to better use.”

“As a hospice nurse. But, of course, our sacred mandate is to accept God’s will without question, and for now it seems His will is for me to toil for the little children in this humble way.”

Mr. Sweeney’s pudgy cheeks pinkened with emotion; she thought there might even be a gleam of moisture in his pale blue eyes. She glanced away, but in her peripheral vision she saw him fumbling for his purse. “I only wish this was more,” he whispered discreetly, pressing a bill into her hand.

“Bless you. Oh, bless you, Mr. Sweeney!” she whispered back. A tenner, she noted with satisfaction; exactly what she’d bet herself he would give. God, she was getting good at this. She slid the greenback into her black leather pocketbook to join the other bills and gold pieces she’d collected in the past three weeks: a little over four thousand dollars. Henry wouldn’t tell her exactly how much they needed, but she was pretty sure it was more than that. Still, four thousand dollars was a hell of a start.

She glanced hopefully across the aisle at the blind man, wishing he’d feel a similar charitable tug on his own purse strings. She guessed he was awake, but it was hard to tell; his round, cobalt-blue spectacles were opaque and his eyes behind them were invisible. She’d been staring at him off and on for the past hour, feeling guilty about it but unable to stop, because his tragic good looks fascinated her. Had he always been blind, she wondered, or only since some terrible accident? How did he make his living? His black broadcloth suit was very fine, his gray silk necktie sedate and expensive. That was all to the good, but a man’s shoes were the surest clue to the health of his finances, and in this case they gave Sister Augustine cause for concern. Run down at the heels and cracked across the insteps, they were the shoes of someone who was either rather poor or rather careless about his appearance, and neither trait seemed to characterize the handsome blind man. Or—distressing thought—they could be the shoes of a man who couldn’t
see
his shoes. The idea made her sit back, ashamed of her rude, sneaky staring. The poor man! So young, so vital and strong. So good-looking.

He had beautiful hands, too. She’d noticed them right away, clasped around the carved handle of the walking stick that jutted upright between his knees. Long, clean, sensitive fingers, artistically bony, and short white nails. No rings. A priest’s hands, or a sculptor’s. She heartily wished one of them would start reaching for his wallet.

Nuns didn’t initiate conversations with male strangers, so she was relieved when Mr. Sweeney, who had been darting secret looks at the blind man with almost as much vulgar curiosity as she had, said straight out, “How do you do, sir?” He took care to aim his voice precisely, so there wouldn’t be any doubt as to which man he was addressing—not that the reeking cowboy was in any condition to misunderstand.

“How do you do,” the blind man replied readily. He had an English accent—the last thing she’d have expected. “It’s Mr. Sweeney, isn’t it? I’m Edward Cordoba.” He held his hand out toward Sweeney, and they shook. “Sister,” he murmured, with a small, respectful bow in her direction.

“Mr. Cordoba,” she murmured back. He was
Spanish?

You could count on Sweeney not to beat around the bush. “Do you come from Monterey, sir?” he asked directly.

“A little south of there. My father owns a ranchero in the valley.”

Sweeney made a knowing, impressed sound.

“One of the smaller ones,” Mr. Cordoba added with a deprecating half-smile. “Only a few hundred thousand acres.”

His voice was low-pitched and intimate, like a cello playing a slow waltz. It took her a few seconds to register the last sentence. When she did, she had to remind herself to close her mouth, which had fallen open.

“Cordoba,” Mr. Sweeney said slowly. “That’s a Spanish name, isn’t it? And yet I could swear your accent’s British.”

Mr. Cordoba smiled. He had extremely white teeth. “You’ve got a good ear, sir. My mother is English. I studied in that country for a number of years.”

His smile withered. He turned his face toward the window. “I was once.”

She and Mr. Sweeney exchanged looks of chagrin. There was an awkward pause.

“What takes you to San Francisco, sir?” Sweeney asked, rallying. “If you don’t mind my asking.”

“Not at all. I’ve enrolled in a school there to learn to read Braille.”

“Is that so? How does that work, now? I’ve heard of it, but never really understood how they do it.”

“It’s a system of raised dots, each representing a letter of the alphabet; one feels them with one’s fingertips.” He dropped his chin, as if he were contemplating his long, elegant hands. Sister Augustine contemplated them with him. They looked capable of reading raised dots to her.

“Then you haven’t been blind for long, I take it?”

She stared at Sweeney, confounded by the bluntness of his prying—although he hadn’t asked anything she wasn’t dying to know herself.

“Long?” Edward Cordoba repeated, very low. A minute passed; she thought that was all the answer he was going to give, and began trying to decipher it. But then he said, “No, I don’t suppose you’d call it long. To me, though, it seems … a lifetime.”

The painful pause lasted much longer this time. She wanted to comfort him somehow, but she couldn’t think how; touching him was out of the question and, under the circumstances, a sympathetic facial expression wouldn’t accomplish anything. So she only said quietly, “I’m so terribly sorry, Mr. Cordoba.”

He made a graceful gesture with his hands, at once dismissing her concern and thanking her for it. “And now, sir,” he said with strained heartiness, “it’s your turn—tell us your traveling story. Where are you from and what takes you to San Francisco?”

“Ah!” Clearly Mr. Sweeney had been hoping somebody would ask him that question. “Well, you might say I’m on a mission too, like Sister Mary Augustine, although mine’s a much more secular mission. I’m the assistant curator for Chinese antiquities at the Museum of East Asian Art in St. Louis. For the past six weeks, I’ve been touring your fine state with a small collection of objets d’art.” He turned to Sister, politely including her in his answer. “It’s a cultural swap, you might say, a reciprocal traveling art exchange between our museum and the Museum of Art in San Francisco.”

“Do you mean you’re traveling with the exhibit now?” Mr. Cordoba asked. “It’s actually on board the coach?”

Under the Light by Whitcomb, Laura
A Love by Any Measure by McRae, Killian
The Secret 05 Ella and Micha: Infinitely and Always by Jessica Sorensen
Cuestión de fe by Donna Leon
Love Captures the Heart (Sully Point, Book 3) by Smith, Nicole
Remember Me by Lesley Pearse
The Doctor's Little Girl by Alex Reynolds
The Darkness of God: Book Three of the Shadow Warrior Trilogy by Chris Bunch
The Auslander by Paul Dowswell
Hablaré cuando esté muerto by Anna Jansson