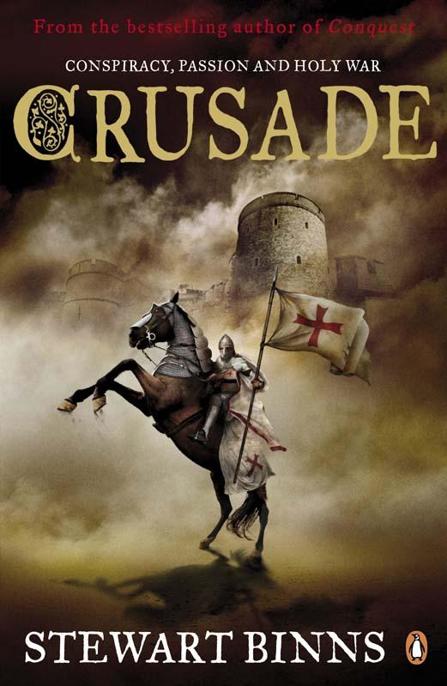 PART ONE: THE FORGOTTEN PRINCE

1 Beyond the Eye of God

24 Brethren of the Blood

36 Phantom in the Night

Coronation Charter of Henry I

Stewart Binns began his professional life as an academic. He then pursued several adventures, including that of a schoolteacher, specializing in history, before becoming an award-winning documentary-maker and latterly an author. His television credits include the ‘In-Colour’ genre of historical documentaries, notably the BAFTA and Grierson winner
Britain at War in Colour
and the Peabody winner
The Second World War in Colour.

He also launched
Trans World Sport
in 1987,
Futbol Mundial
in 1993, the International Olympic Commitee
Camera of Record
in 1994 and the Olympic Television Archive Bureau in 1996.

Currently Chief Executive and co-founder, with his wife Lucy, of the independent production and distribution company Big Ape Media International. His first novel,
Conquest,
was published in 2011 and is available in Penguin paperback.
Crusade
is the sequel.

Stewart’s passion is English history, especially its origins and folklore. His home is in Somerset, where he lives with his wife Lucy and twin boys, Charlie and Jack.

A forgotten prince, the last of his dynasty, but one of the builders of a new England

My father-in-law, a true Englishman

The year is 1126, the twentieth year of the reign of Henry Beauclerc, the fourth son of William the Conqueror. He will be the last Norman King of England.

Norman rule in England remains resolute and the country is prospering. However, endless feuds within the Norman hierarchy, especially between the Conqueror’s sons, have brought much strife and bloodshed to England, the British Isles and Europe.

Elsewhere, Christian Europe has become obsessed by Jerusalem and the Islamic lordship of the Holy Land. The First Crusade had been launched in 1095 and, amidst much brutality, led to the capture of Jerusalem in July 1099. After 700 years of slumber, a new Europe is asserting itself and the price paid for this by many tens of thousands is exacted in blood.

And yet, even in the midst of the worst of the mayhem of internecine bloodletting and religious fanaticism, the hope still flickers among many that peace and liberty are attainable.

A new code of ethical behaviour begins to emerge, in part influenced by the moral qualities of Islam, known as the Mos Militum – the Code of Knights. Honour, truthfulness, courage, martial prowess, pride in the face of superiors, humility in the face of inferiors and protection of the weak – women, children and the old –
all are becoming cherished virtues among the warrior classes.

Epic sagas of heroic feats from the past flourish. The highly popular
Chansons de Geste
and
1001 Arabian Nights
tell of great and worthy deeds and inspire young warriors to lead better lives. There is even the beginning of a highly romanticized view of women. Previously excluded from military ideals, the notion of Courtly Love has emerged, where women are idealized and knights strive to impress them rather than possess them.

It is the dawn of the Age of Chivalry.

1. Beyond the Eye of God

The scriptorium of Malmesbury Abbey is in the middle of a long working day, a day that begins at five in the morning and does not end until vespers in the evening. Over twenty monks are zealously transcribing and illustrating the great books of the day, including those of Abbot William, the leader of Malmesbury’s Benedictine community and widely regarded as the wisest man in England.

Although the scene is a picture of intense toil, except for the gentle scratch of quill on vellum, it is conducted in reverential silence.

The monks of Malmesbury are the guardians of the finest library in northern Europe. They are engaged in the vital work of transcribing the precious word of God and the entire fruits of human knowledge. Their labours will become a major part of the heritage of these times.

Outside the abbey cloisters the burgh of Malmesbury bustles and flourishes noisily with the din of the commerce of urban life. An ancient settlement resting on an easily defended flat-topped hill, its celebrated springs have attracted settlers for hundreds of years.

In the heart of Wessex, Malmesbury had been a jewel in the crown of Anglo-Saxon England. With the arrival of the Normans sixty years ago it was one of the first English burghs to come under direct Norman rule. In 1118, Roger
of Salisbury, Chancellor to King Henry I, seized Malmesbury and brought it under his bishopric at Salisbury. He immediately began to rebuild the abbey and the burgh’s walls in stone, a process which is still much in evidence.

The burgh is typical of England under the Normans – at least, in the prosperous southern earldoms. It is thriving in an uneasy, pragmatic truce between the ruling Normans and the defeated and dispossessed English. As is often the case in conquered lands, the victors offer sufficient wealth and opportunity to important parts of the native community to persuade them to cooperate with the new regime. Some call it treason, others cowardice, yet others common sense.

William of Malmesbury’s great work,
Gesta Regum Anglorum
, a history of the kings of England, had been completed in 1122, but he is still adding accounts, anecdotes and stories to the vast wealth of knowledge in the abbey.

Sadly, his eyesight is failing him and he relies more and more on the support of the brightest of his young acolytes, Roger of Caen, an intellectually gifted and enthusiastic young Norman, the second son of a nobleman.

William, a tall, stooping figure looking every inch a learned ecclesiast in his black habit, summons Roger into the cloister.

‘We must journey to the North.’

‘Recently, a Norse trader from Northumbria brought me an interesting story. What do you think became of Prince Edgar the Atheling?’