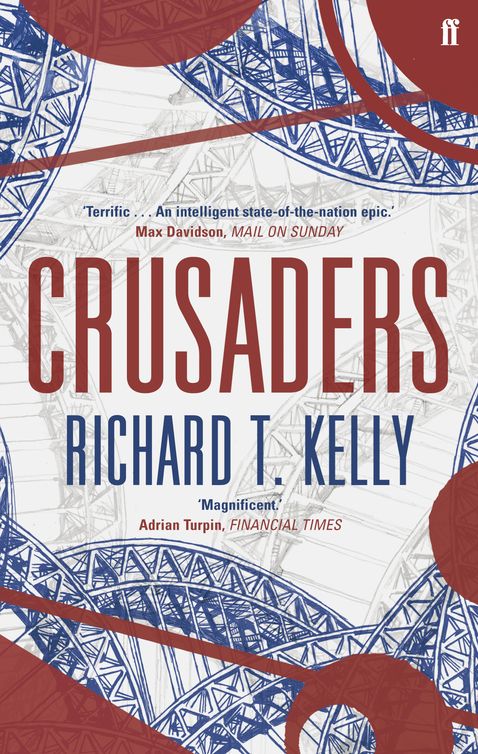 For Trevor, Kathleen and David

Since every man is a microcosm, in whose heart may be read all that sends armies marching, I must admit I am no better.
I. F. STONE, 1956

The intriguing thing about Pilate is the degree to which he tried to do the good thing rather than the bad. He commands our moral attention not because he was a bad man, but because he was so nearly a good man.
TONY BLAIR, MP, EASTER SUNDAY 1996

The tale told in these pages takes place in the recent past and across the north-east of England, amid some real and recognisable cities and towns. But the reader is advised that there is no ward in the west of Newcastle by the name of Hoxheath, nor is there a
parliamentary
constituency called Tyneside West. There is no Grey Theological College in Cambridge, nor an Excelsior Working Men's Club in Sunderland, nor a nightclub called Teflon on Newcastle's Quayside â and so on. That said, a good many place names in the book are taken from life, as are certain personages. The mixture is intended only to lend credence to the fictional
characters
and predicaments described herein.

BOOK ONE: THE REVEREND GORE

I Size and Authority

He had set himself a mission and felt beholden to it. He told Audrey as much when she came in her coat to the threshold of his room, asking would he join her for morning service at St Aidan’s. He wasn’t impervious to her plea, and the skies were looking doomy, but he had determined for this day that he would climb up to the Monument.

He had seen it from afar, perplexedly at first, for there seemed no earthly reason why a Greek temple sat foursquare atop a wooded hillside over Sunderland. His mother, the amateur
historian
, spoke vaguely of some civic debt to ‘Radical Jack’, Earl of Durham back in the days when the northern cities were granted Members of Parliament. Altogether John approved of the
symbolic
aura, and wished to associate himself with it. He had plotted a course through those woods guarding the hill’s upper reaches, an awkward style of approach, likely to ensure solitude.

That morning he donned his anorak and cycled ten miles north by A-roads, wary of cars that zipped by, blaring their tetchy horns. Keening easterly he passed through drab stretches of industrial estate before hazarding upon a long tree-lined path. Freewheeling down its slope he could see the great grey Monument, perhaps two miles distant, gravid blue-black clouds massed and settled above. He crossed the Wear by a footbridge, chained his bike to a bench by the Old Fellows pub, and trudged up a winding road that levelled out between wide fenced fields. Sedentary horses studied the intruder, then snorted and galloped away. John felt light rain on his face as his target steadily enlarged. Finding his way barred to the enclosure below the wood he took a circuitous
road left, and climbed over a stile onto a grassy incline where the ground grew steep and moist underfoot – he began to feel embers of heat in his cheeks, exertion in his calves. But on and up he trudged, and soon he was stepping through a kissing gate into the cool gloom of Penshaw Wood.

Then he made out something up ahead of him, wet and dank and crumpled in a pile next to a muddy puddle. Warily drawing near, he peered down. It was an anorak, dark blue, akin to that he wore himself, but smaller – as would fit a child – and slathered in muck. The protective coat, so roughly discarded, seemed the very evidence of something ugly, some misdeed. He spun and looked all about him in the gloom, feeling a hard pulse behind his ribs. No, he was too much alone here. His composure splintered. He began to jog, then to run.

The trail wound on interminably, indifferent to his escape; until some light seeped through the trees where a passage was
seemingly
dug out, and he scrambled up this boggy track – breaking out onto a hillside carpeted by high bright-yellow rapeseed, stretching for half of a mile under moody skies and a cordon of telegraph posts.

Recovering his breath, he stepped over a stile in a wire fence and made the trek up a stony path, his eyes now fixed on
journey’s
end. It was taller than a dozen men, surely a hundred feet long, its porticos in a square of four-by-seven – a colossal
achievement
, as if transplanted from Periclean Athens. At closer quarters he saw the difference, the darkness – for those columns were blackened by coat upon coat of industrial cinder, made indelible
by decades. In dismay he saw some crude scrapings into the stone, clearly the work of knives or chisels – ‘I Lishman 1955’, ‘S P Evans 1972’, ‘Donk’, ‘Jass’, ‘Nipper’, ‘Buns’, their claims on
posterity
more recent than Radical Jack’s.

He hoisted himself up onto the broad stone base and paced the perimeter of the atrium. There was no roof, and rain had puddled between the uneven cobblestones. The aura was that of some queer semi-derelict outdoor theatre, amid a blasted heath, under a bleak sky, a place fit to offer Greek tragedy to uncomprehending locals. Or Shakespeare, perhaps –
Julius Caesar
? But there was a kind of grandeur here, no question: he would dare to call it a
transcendency
.

His spirits reviving, John turned around on his heels, surveying the panoramic views. But to the north the Wear Valley was not – he decided – so very much to write home about: naught but the industrial stacks and housing sprawls of Washington. Southward, Chester-le-Street and Houghton-le-Spring yawned out for drear miles, to no greater effect on the imagination.

The traffic noise from the motorway below was muffled by
elevation
and the rising wind. A strange depleted feeling stole over John, one he had grown to recognise and regret but to which he could give no name. It was a kind of sadness, banal to the taste, and yet it masked an ache like hunger. He wanted something, while knowing the want to be insatiable, unrequitable. There was something out there in the world, never to be his.

He hunkered down at the foot of a column and took his diary from his anorak pouch, thinking he might scribble awhile, as had become his wont. His universe was described therein, and he felt its miserable limits keenly. He was much too proud of his
opinions
, he knew – the effort he invested in them, the degree to which he fancied they set him apart from his peers.

‘Shyness too is a vanity of man,’ he murmured into his chest, and, liking the sound of that, he uncapped his pen and inked with care onto the rain-specked page.

‘Divvint be shy,’ said a voice from above.

John snapped his head toward the sound and found the speaker
standing but a few feet away across the cobblestones. He was short and squat, clownishly overweight, clad in a black
mackintosh
. Moon-faced and pasty, his cheeks were unshaven, his black hair plastered over his brow.

John was mortified. The wind had blown him so deep into
self-absorption
he had assumed total solitude. And yet this lump of a man had clambered soundlessly up onto the Monument’s base.

The man’s eyes were small and dark, his slight smile unwelcome.

‘Were you looking for us?’

The man’s fists had been sunk into his mackintosh pockets, but now he pulled out a chubby paw and gestured in the air.

‘It’s some thing this is here, eh? Some thing.’

Pushing his diary back into his anorak, John lifted himself from the cobblestone floor, not taking his gaze off this loon, the swell of whose pale belly sagged, voluptuous, between his unkempt pullover and beltline.

John was on his feet, but cornered. He was taller, but the loon heavier – did that mean stronger? Or slower?

‘Yeah?’ John risked a few glances about him, in directions he might flee.

‘Aye. And do y’knaa how they got them stones shifted up here? Do y’knaa
that
?’

‘They were carried by angels.
Arch
angels, like. Michael, and Raphael. And Urial, and Gabriel. And Lucifer. The most
bee-yoo-tiful
.’

The loon appeared most proud in his wisdom. Panic was
throbbing
anew in John’s chest.

When the loon stepped toward him John felt the blood move his body, and he turned and leapt the five or six feet from the base onto the grass below, pitching face-forward. He scrabbled upright, his knees and ankles shouting in pain, forcing himself to run – and in that moment he heard the garrulous bark of a dog, then a terrier was bounding up and over the crest of the hill before him.

A human head-and-shoulders surfaced behind – a redhead female, some heavy-coated wifey. The woman looked at John and then, uneasily, beyond him, while her dog gambolled hither and thither at her feet. John strode unsteadily toward her.

He hastened past her, down the slope and onto Hill Lane, the pathway into safer, sparser woods from whence the woman and her dog must have come. Ten yards onward, his composure restored, he chanced a look behind him. But there was not a soul in sight, only the blackened Monument, inscrutable once more.