Crushing on the Wrong Joshua 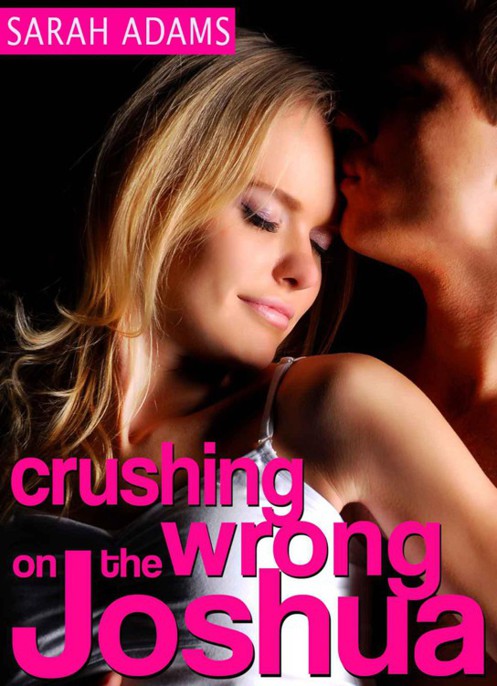 Crushing On The Wrong Joshua

All characters appearing in this work are fictitious. Any resemblance to real persons, living or dead is purely coincidental.

For questions and comments about this book, please contact us at [email protected]

“You're going shopping with me on Saturday, right?” Amber asked, “I need your bargain hunting skills. I suck at it and you don't.”

“That's because I refuse to give up until I find a sexy deal or I leave the store empty-handed. It's called a budget. Make one and stick to it, girl,” Tamara laughed.

Tamara made it sound easy and for her it was. Amber knew that her mother was an avid coupon-clipper and could take a one hundred dollar grocery bill down to under five bucks. Amber wondered if it ran in their blood.

“So you'll come with me?” Amber grinned.

“I'll go if you promise not to spend the whole damn day asking me what Joshua Nelson would think of everything you lay your grubby little hands on,” Tamara said.

“I don't do that,” Amber frowned, “Okay, yeah, I do, it's just that he's so freaking hot! His thick black hair! His deep blue eyes! His dimples! Oh! I'd love to touch his dimples, Tamara,” Amber swooned.

“When are you going to give it up, Amber? You've been pining over him since the sixth grade! We're sophomores in high school now! Give it up already, girl! There's plenty of other sizzlin' fish in the sea!” Tamara said, “We need to shop for the dance this weekend and not spend all our time thinking of how to make Mr. Oblivious like you.” Tamara said, “Seriously, girl, I'm startin' to worry about you.”

“I'm not as obsessed as you think!” Amber said and then added, “Though I fell in love with Joshua Nelson when I first met him and that was in fifth grade, not sixth.”

Amber acknowledged that her crush on Joshua Nelson bordered on insane. She remembered vividly the first day she laid eyes on the boy when his family moved into town from out of state. He had been a cute boy and was growing into the most delicious man she had ever been blessed to lay eyes on.

“Whatever, are we shopping for dresses this weekend or not? If we are I need to tell my parents tonight, so they know I can't babysit the pipsqueaks this weekend, okay?” Tamara rolled her eyes.

“Didn't I just ask you to go shopping with me this weekend? Of course, we're going! We can look for dresses and then some cute low-cut tops, that will just drive Joshua crazy,” Amber giggled.

“Why are you so darn crazy about that boy?” Tamara shook her head.

“The better question is: How can you not be?” Amber grinned, poking Tamara in the side.

“Quit poking me!” Tamara said, pulling away with a smile.

“Seriously, delusional,” Tamara laughed, “You better be glad I don't like him, because I'd go up to him and steal him away faster than you could say “Tamara, please, girl, don't!” I don't like him and you know why I don't like him. He's a stuck-up broody jock that looks like he's taken one too many knocks to the head. Also, he's dumb. I heard that Alexander Rushings has to do his math homework so he can stay on the basketball team.”

“We need him on the team!” Amber retorted.

“Don't swoon now, girl, here comes your lover boy, and boy, does he look like someone stole his chocolate milk!” Tamara said, motioning with her head.

Amber spun on her heels, locking her eyes instantly on her target. There he was, standing nearly six foot tall, with his thick black hair, deep blue eyes, and total lack of dimples. Joshua Nelson was not smiling and Amber frowned, missing his dimples.

“What's wrong with him?” she hissed to Tamara.

Her heart sank into her stomach when Joshua walked by studying his feet. On a normal afternoon he walked by surrounded by a group of his teammates and their girlfriends. From his arm hung the too-skinny Hannah, twirling a lock of her long wavy blonde hair around her middle finger. His teammates were hanging out by the doors, but Hannah was nowhere in sight. At least she wasn't until Tamara pointed her out.

“Look, Hannah's over by the trash can, on Alexander's arm!” Tamara hissed in her ear.

“What? Alexander Rushings?” Amber gasped and turned to look.

“No, Alexander the Great,” Tamara rolled her eyes.

“If you ask some girls, they'd agree with you on that,” Amber laughed.

Her giggle fit was cut short when her eyes fell upon Hannah and Alexander. Her arms wrapped around his neck and Alexander's hands rested on the other girl's too-skinny waist. Their lips were pressed together and Amber could see their tongues darting between mouths.

“Yuck,” Tamara said, “What I don't understand is why all these boys want to swap spit with her! You think they'd be afraid to break her. She needs to get some meet on her bones. She needs to look fit like me.”

“You're skinny too,” Tamara laughed.

“Not all of us can be incredible volley ball players and have big-hulking-she-muscles like you,” Amber teased.

“I don't have big-hulking-anything’s, unless you're talking about the puppies I have to carry around in my bra all day. Speaking of which, I wish my mom would hurry up and get here. I want to get home and get this damn thing off. I let her talk me into buying a bra with and under-wire and it's killing the pups,” Tamara said.

Amber knew that Tamara was right. Her BFF wasn't too muscly. Tamara wasn't like the bulged-out-veiny female body builders from television. Amber's BFF had an athletic build. It worked well with her dark ebony skin and straight forward attitude. Amber bit the inside of her jaw when Tamara began to talk about bras and their contents. Next to Tamara she felt that the contents of her bra left much to be desired. She was beginning to wonder if Joshua Nelson would notice her if she had larger breasts, when Tamara's mom pulled up.

Amber kicked her feet and shifted her weight to readjust her backpack.

“He's never going to notice me,” Amber frowned, “I might as well give up and go be a nun, because that's exactly how much attention he's given me over the last seven years: NONE!”

Amber startled and looked up. She twisted her lips into a lopsided grin as she slid into the passenger seat of her dad's old Dodge Ram.

She looked at her dad in the rear-view mirror and seen her own green eyes looking back at her. Her hair was brown with red highlights, where as her father's was blonde. Amber often wished she had inherited her father's blonde hair and her mother's blue eyes. Then maybe Joshua Nelson would notice her.

“Yeah, I'm fine, dad. There's this big dance coming up at the end of the month and Tamara wants me to go dress shopping with her on Saturday. Would it be okay if I went?” she asked.

“Has Joshua Nelson asked you to the dance?” he grinned hopefully.

“You just need to talk to boys more,” he chuckled.

Amber knew her Dad felt guilty about his lack of girly wisdom. She tried to keep him in the know, but some things she just couldn't tell him. How was she supposed to tell him that she might die of bliss if she could just touch Joshua Nelson's dimples?

“Do normal girls tell that to their mothers?”
Amber wandered silently.

Amber's mom lost her battle to breast cancer almost ten years ago. She wasn't able to recall much about her mother that wasn't related to the disease. Amber flinched when she remembered her mom's thick wavy blonde hair thinning, splitting, and finally falling out. Her mom had cried more with every clump of hair she found on her pillow. Her frail frame had heaved and shook with every sob, sending the six year old Amber running from the room, yelling for her dad's help. Amber had never known how to handle it.

She could only bring to mind one memory of her mother that didn't include her battle with cancer. They were sitting in an ice cream shop and her mother was wearing a light green summer dress. Her mom ordered a banana split and they shared it, eating bite for bite, teasing one another about sneaking extra bites.

It wasn't that her dad didn't talk about her mom, because he did. A lot. Too much sometimes. Amber had just never asked him what her favorite color had been. If she was wrong and it wasn't green, Amber didn't want to know it. Her favorite color was green and Amber liked to think that she had something in common with her mother.

“We're here, kiddo,” her dad said when the truck came to a stop.

“Oh, yeah,” Amber muttered and looked up at the tall building that served as the city's library. She had asked him to drop her off here after school, last night. How had she forgotten? Oh, yeah, Joshua Nelson was out there with a broken heart and there was nothing she could do about it. For a moment she thought about finding him alone in the library and running her fingers through his thick black hair while she cooed, assuring him everything would be okay. He didn't need the too-skinny Hannah. He could have her instead. She'd never be caught dead or alive swapping spit with the so called Alexander the Great.

“Thanks, Dad,” Amber said as she forced her body to move. She wasn't in the mood to talk. Her nose crinkled when she thought about the history report and math homework that weighed down her backpack.

Amber took a deep breath as she stepped into the library. The smell of paper and book bindings filled her nose and brought a small smile to her lips. The summer before she started high-school Amber had participated in the library's summer reading program, because Tamara's family had gone out of town for vacation, leaving her to hang solo for the summer. Since that summer Amber had spent as much time at the library as her dad would allow.

Putting off the inevitable hours spent working on homework Amber headed for the books. She wasn't looking for anything in particular. On her nightstand at home were two stacks of unread books. Amber inhaled deeply and held it for a count of three before exhaling. Then she repeated the process over and over until she found her rhythm. She continued her breathing exercises as she walked through the rows of books. Amber thought the best place for moving meditation was the library.

She enjoyed the feeling of being surrounded by millions upon millions of words, knowing that writers had carefully carved each of them into the stone of time as they printed them onto the page.

“Joshua looked so sad today,”
she thought to herself,
“I should slap the skinny right off, Hannah.”

“No, maybe I should thank her, if he doesn't have a girlfriend it'll up the odds of him noticing me.”

“Why hasn't he noticed me yet?”

“What haven't I done, that I need to do to get him to notice me?”

“I give up,” Amber muttered under her breath, “This just isn't going to cut it today.”

Rhythmic breathing and meditation usually cleared Amber's mind. Her distracted state was the exception not the rule.

“Why does he always go for girls like that? Doesn't he see I could make him happy?”
Amber wondered.