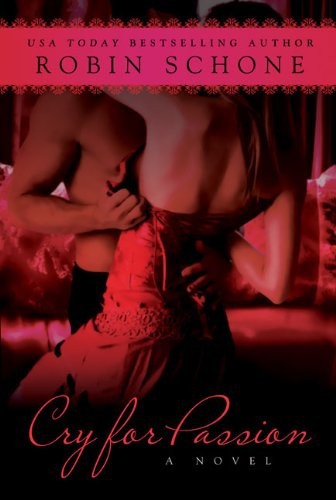 Cry for Passion is dedicated to justice,

and the men and women who pursue it on our behalf.

Keep up the good fight, ladies and gentlemen!

Love is the flower of life,

In The Lover I wrote: “We ain’t come that far, baby!” Materially, we really haven’t: Our Victorian ancestors had indoor plumbing, electricity, telephones, department stores, amusement parks, commuter trains, toilet paper, effective contraceptives. . . . Women for the most part had the same conveniences then that we have now. But—and that’s a very big but—they couldn’t vote.

I didn’t fully understand the ramifications of legal disenfranchisement until I wrote Scandalous Lovers. Women, I then discovered, could not serve as jurors. In a court of law, women were judged not by their peers but by men, male jurors who routinely exonerated husbands from domestic crimes simply because a beaten or murdered wife disobeyed or “sassed” back.

The government—a body of men charged to protect the liberty of women—allowed this sexual discrimination.

Well, I eat my earlier words. Legally, we have come a long way, baby. While Rose Clarring is a fictional character, her story was inspired by a very real woman—and a man, a member of Parliament—who challenged the law and changed the course of history for all married women. Thank you, Emily Jackson and Hardinge Giffard, First Lord Halsbury and Lord Chancellor. And thank you, Mary Lyndon Shanley, for your very illuminating book Feminism, Marriage and the Law in Victorian England, 1850-1895. You are the inspiration for Cry for Passion. If I had not read your book, I would not have known about this landmark in the history of women. I also would like to thank Valerie Weingart at the Northwestern University Law Library in Chicago who very kindly took me underneath her wing, and made it possible for me to get a copy of the original In re Jackson ruling as printed March 28, 1891 in Justice of the Peace, And County, Borough, Poor Law Union, and Parish Law Recorder.

Books in The Men and Women’s Club Series

“THE Men AND WOMEN’S CLUB” in PRIVATE places

“Mr. Lodoun.” The clattering footsteps that dogged Jack’s heels picked up speed. “If I might have a moment of your time.”

He turned up his collar: The soft wool blocked neither the cold nor the woman he had earlier examined, and who now followed him.

But the trial was over. And so was Jack.

He lengthened his stride.

“I am murdering my husband, Mr. Lodoun,” froze his arm.

Before Jack, a sweat-streaked dun hurtled down the cobbled street, ears flattened, mouth working to expel a sawing bit.

“Please don’t turn away.” Behind Jack, the clear, cultured voice reverberated over the pounding of hooves and ringing celebration. “I need your help.”

Need gripped his testicles. Simultaneously, the acrid stench of hot, damp horse slammed into Jack’s face, freeing him from his paralysis but not the desire with which he daily lived.

“There are police patrolling the courthouse, Mrs. Clarring.” Jack hoisted higher the furled umbrella. The sweat-streaked dun passed him by, spittle blowing from its mouth like cobwebs. The two-wheeled hansom cab rattled after the protesting horse. “If you need assistance in saving your husband, I suggest you inform them, rather than I, of your murderous intentions. If you need representation after you kill him, I suggest you solicit James Whitcox.”

“You remember my name.”

He had subpoenaed her. He had questioned her.

Now all he wanted to do was forget her.

Jack ignored the woman who would not be ignored.

Rose Clarring halted behind him, a throbbing reminder of the trial he had not won and the man to whom he had lost everything. “I don’t want to murder my husband, Mr. Lodoun.”

A four-wheeled cab edged closer to the curb.

Seven months and three weeks earlier a woman had hailed a Clarence cab.

That day, also, had been a Wednesday.

She had died penned in muck underneath four wheels while Jack, cock satiated, drowsed between clean sheets damp with their sweat and their sex.

“I want to divorce him,” jolted Jack out of the past.

He could not board a four-wheeled cab, no matter that the cries of men and women who jeered his loss rode the crowded London street. He could not get on with his life, shackled by grief as the sweat-streaked dun was shackled to the two-wheeled hansom.

All he could do was lower his umbrella and face the woman whose testimony continued to knot his stomach. “Is your husband a bigamist?”

“No,” she said, pale oval face rouged with cold. “Of course not.”

There was only one certainty in Jack’s life: parliamentary law.

“Has he deserted you?” he curtly probed, knowing the answer.

Small, black-leather-gloved fingers curled around the black gores of a slender umbrella. “No.”

“Then I suggest you murder him, Mrs. Clarring, because no barrister can win you a divorce; whereas, should you rid yourself of your husband, I have no doubt Whitcox would win you an acquittal within a week of your arraignment.”

She did not step back from his biting sarcasm. “I love my husband, Mr. Lodoun.”

“So you said in the witness box.”

Rose Clarring was thirty-three years old, a golden-haired, blue-eyed woman who stood ten inches shorter than his own five-foot, ten-inch frame. She looked like a pocket Venus in her stylish black bonnet and worsted wool cloak, a woman who would crumble at the slightest provocation.

Jack knew differently: In the witness box she had not once looked away while he deliberately baited and belittled her.

Rose Clarring stepped closer still until her femininity choked his cock and the churning mob at the end of the street shrank to the size of dark, bloated maggots. “You did a very great thing, sir.”

A bark of laughter joined the cheers and jeers of those who thought otherwise; it came from Jack’s mouth, but it contained no mirth. “I lost, ma’am.”

“Because it was the right thing to do.”

The bitter dregs of laughter dried up in his throat. “Are you accusing me of malfeasance, Mrs. Clarring?”

“If you intended to win the trial, Mr. Lodoun”—a sharp breeze rifled through the white egret feathers crowning her bonnet; it carried upward a faint waft of roses—“all you need have done was say that Mr. Whitcox and Mrs. Hart were lovers, and you would have done so.”

And Frances Hart, a forty-nine-year-old widow who had joined the Men and Women’s Club—an eclectic society of men and women who discussed sexology—instead of mourning the death of her husband with her family, would have been remanded into the care of her son, Jack’s client, who would have committed her to an insane asylum. And James Whitcox, a man who never lost, would have learned what it was like to lose the woman he loved.

But Jack, sworn to uphold English law, had withheld key evidence. And he did not know why.

“Coventrys ’n chonkeys! A ha’penny, a ha’penny!” tumbled down the cracked pavement; it was chased by a masculine rumble. “Ginger beer, git it ’ere!”

The street vendors had found the mob.

“I can’t help you,” Jack said, breaking free of her gaze.

“If you were Mr. Whitcox, you could not,” halted him mid pivot. Watery sun rays burst through scuttling gray clouds. The translucent gleam of a pearl earring riveted his gaze. Immediately the single gem was superimposed by a pearl necklace, a wife’s recompense for bearing a daughter. “But you aren’t Mr. Whitcox, Mr. Lodoun: You’re a member of Parliament.”

Rose Clarring’s response was a sharp slap of reality.

Anemic light aureoled her black bonnet and danced on the tips of white feathers.

“And so you want me to petition Parliament for a private act,” Jack harshly deduced.

There was no hesitation in either her gaze or her voice.

Only once, he remembered, had Rose Clarring hesitated in the witness box.

Is your husband here with you today? Jack had asked.

Her answer had been damning. The pain inside her eyes had kneed him in the groin.

Society did not approve of divorce. And neither did Parliament.

His position in the House of Commons was the only thing Jack had left.

Deliberately he turned his back on Rose Clarring and faced Newgate Street.

“Have you ever loved, Mr. Lodoun?”

A trill of laughter drifted on the grumbling passage of a carriage. Through the window he glimpsed the curve of a feminine cheek.

Jack’s heartbeat accelerated, even as his mind jeered that he would never again hold the woman he loved.

Immediately the laughter and the carriage were gone, taking with them the spark of hope.

The sudden blockage of the relentless breeze alerted Jack that Rose Clarring had stepped closer still.

“You do not approve of the Men and Women’s Club,” she said.

“I do not approve of women who deliberately jeopardize their husbands’ good names.”

“Would you rather a woman murder her husband?” prickled his shoulder blades.

Across the street, a man wearing silver-rimmed spectacles ducked inside Bailey’s Book Shop.

Jack knew the man: He was a court usher. Jack knew what he sought: pornography.

One month, one week and four days earlier Frances Hart, James Whitcox and eight other members of the Men and Women’s Club had sought the same sexual titillation at the Achilles Book Shoppe.

Rose Clarring had been among them.

But Jack had withheld that evidence, too.

“You said you wanted to divorce your husband”—he concentrated on the closing door of the book shop instead of on the woman who stood behind him—“not kill him.”

“But I am killing him,” glanced off his left arm.

“The love I bear him is killing him.”

“The love he bears me is killing him.”

Rose Clarring’s pale, cold-rouged face turned up to his; the top of her head did not quite reach his chin. Her cloak, black as a widow’s weeds, molded her body even as a blast of chill spring air battered his bowler.

“Every day he is dying, Mr. Lodoun, because I have not had the courage to stop it.”

In the witness box—underneath the flickering gaslight—her eyes had been midnight blue. In the watery wash of sunlight, they were the pure, untarnished blue of cornflowers.

“Yet here you are, Mrs. Clarring”—Jack gazed over the white feathers blowing in the wind and searched the approaching stream of groaning, clattering conveyances for a hansom—“positively brimming with courage.”

“Because of you,” snapped his head downward. “And the way you looked at Mrs. Hart and Mr. Whitcox.”

“I looked at them as what they were,” Jack sharply rebutted, “a plaintiff and a colleague.”

“You looked at them with envy.” Her gaze did not waver from his; the feathers crowning her bonnet danced a macabre rite. “You know what they’ve found with one another.”

Jack’s lips curled cynically. “I can go out and buy what they have any night of the week.”