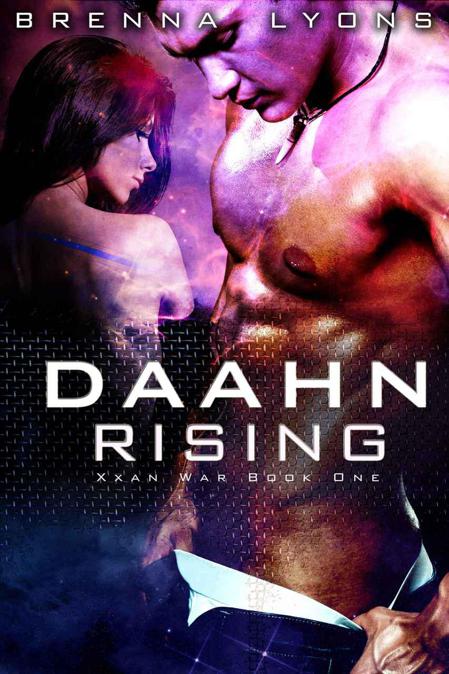 Will of the Stone

We Shall Live Again

May the Best Man Win

Raised To Be His Own

The Color of Love

The Last of Fion’s Daughters

To Tamer and the Putzboy Crew of Sunshine Court and Topaz Lane.

Zondra Daahn sashayed toward the base club, dressed for man-hunting. The quickening was her only reason for being here; it was rising in her, driving her mad. She needed a cock to ease the passage.

She winced. What a lousy pun
that
was.

I don’t have to do this.
That thought stopped Zondra dead in her tracks halfway to the door. She hesitated, considering it.

Raashh’s nest wasn’t far from the base. Zhaahvan’s wasn’t much farther. Though she didn’t dare show up at the door to one of the nests in her state unannounced, one call to Aleeks and preparations could be made to have an unmated young Dominant prepared to serve her needs.

And all the others dismissed.
If she showed up in a nest with more than one unmated Dominant in residence, every unmated male would fight for her, possibly even the Subdominants. They’d likely kill for her.

That truth sent a shudder of revulsion down her body. Terror made her take a step back.
What if there are Dominants inside the club?
If there were, she could start a massacre.

Common sense intruded. The Xxan were unlikely to go to human clubs. The smells and sounds were intolerable. The human food was inedible, and some drunken humans enjoyed picking fights they couldn’t possibly win. After nearly half a century on Earth and working as allies, many humans still saw all Xxan as alike—invaders, foes.

I don’t want a Dominant for my first.
She would likely mate with a Xxan-human crossbreed like herself. She was unlikely to take long-term human lovers, no matter how appealing she found them. Prejudices ran hot in too many humans for that.
This is probably the only chance I’ll have to fuck a human.
Zondra didn’t intend to waste it.

If there was any place she was likely to find an alpha type, the human equivalent of a Xxanian Dominant, this would be it. Human military men were often alphas, and they certainly weren’t adverse to the idea of screwing something appealing with few questions asked. Her
Zhigaaah
would make her very appealing, perhaps appealing enough for a single human man to last as long as she’d need a male tonight. If she found a human alpha that appealed to her, she was going to indulge her many fantasies about humans while she sated the quickening.

Her stomach cramped and complained, and her body heated another degree.
If I don’t find a suitable alpha quickly, I will have to call Aleeks and have him prepare a nest for my arrival.

With that a given, she sauntered into the club.

She hadn’t even crossed the distance to the bar when the first male approached her. “Interested, doll?”

Zondra stopped and turned her head to size up the male who’d addressed her. She inhaled deeply through her mouth, evaluating his scent. Her determination was sealed that quickly.
Subdominant. Wannabe. Unsuitable.
“For the right man,” she returned coolly, making it clear he wasn’t that man.

Unfazed, the Subdominant moved toward her. “Oh, I am the right man,” he drawled.

“Impossible. Now if you’ll excuse me—”

Her attempt to round him was cut short when the Subdominant grasped her arm and dragged Zondra to his chest, burying his face in her hair.

Zondra jerked away from his body, then pulled her fist back to strike, but another man’s hand encircled her wrist.

“Now don’t do that,” the new arrival chided her gently. “That would be destruction of government property.”

She turned her head, meeting the newcomer’s ice blue eyes. Zondra licked her upper lip, tongue-scenting him.
Dominant.
She moved closer to him, making her choice clear.

The Dominant smiled widely. “Let me.” He punched the Subdominant hard, sending the lesser man sprawling.

Both hands released her. Before Zondra could press herself to the Dominant, he stepped between her and the sap levering himself off the floor. The Dominant was protective of her; he was turning out to be just what she needed so far.

The Subdominant staggered to his feet, glaring at them both. Before Zondra or her protector could react, shore patrol ambled over, two rather unhappy-looking sorts.

The one with the chief’s rating patch looked from one combatant to the other, then shook his head in seeming exasperation. “I might have known. Duncan and Reynolds. Do I have to have
another
discussion with your captain?”

The Dominant made an irreverent show of his hands being tied, and Zondra swallowed a laugh.

The chief bit back a smile of his own. “This just might be why you’ve gone to chief’s board four times and been turned down, Duncan.”

“Yeah. Life sucks.” But his tone didn’t make it sound like it did. The Dominant’s amusement was impossible to miss.

The Subdominant — Reynolds — wiped a stream of blood off his chin. “There’s nothing amusing about the charges I intend to file. Assault mean anything to you?”

Duncan laughed harshly. “Sexual assault, simple assault, and sexual harassment mean anything to you? You never manhandle a lady that way. As I heard it, she said you weren’t her type. Was rather blunt about it, too. Even a blockhead like you couldn’t have misunderstood it.”

Duncan tensed, and the chief stepped between them. Zondra didn’t doubt he did so at the risk of his own skin.

“That true?” the chief asked Zondra.

“Which part?” she quipped. “The part about Reynolds grabbing me and insisting my search was over? Yes. The rest? I’m no one’s cock-tease. I’ve been in this bar for all of five minutes. I’ve had no time to tease him up.”

She considered that. As much as she’d like to see Reynolds pay for presuming to touch her, pressing charges would have three very negative results.

She’d have to show her military ID, which would land her in the cell next to Reynolds. Although she hadn’t ordered a drink and had no intentions of doing so, she was still a minor by human laws, her Xxanian genetics disregarded.

And shore patrol will disregard them.

Once the officers knew her age, they would contact her
seir
, which would lead to the final unfortunate result to this fiasco: her
seir
,
gran-seir
, and brother would lock her up until she was an elder.

Even if she managed to escape all those outcomes, she’d spend the next two hours giving a report while the quickening drove her mad.

Zondra feigned indifference. “If he leaves and forgets the charges he was planning to file against Duncan, I’ll drop mine.” She smiled sweetly. “And that saves you a lot of paperwork, Chief.”

All four men gaped at her, Duncan giving his adversary his back to accomplish the move.

“Your call, Reynolds,” the chief intoned. “Night in the cell and being called to the carpet, or walking away now with nothing but a loose tooth or two as punishment.”

The Subdominant scowled at her, then stalked away. Zondra watched Reynolds leave. If there was one thing a Xxanian child learned, it was to never give an enemy your back.

“Guess that’s that,” the chief decided. “Have a nice night, miss. Duncan...” He sighed. “Stay out of trouble.”

Duncan didn’t answer that, smart-assed or otherwise. She could see him glaring at her in her peripheral vision, his arms crossed over his broad chest.

When the shore patrol was gone, he unclenched his jaw long enough to speak. “You shouldn’t have done that.”