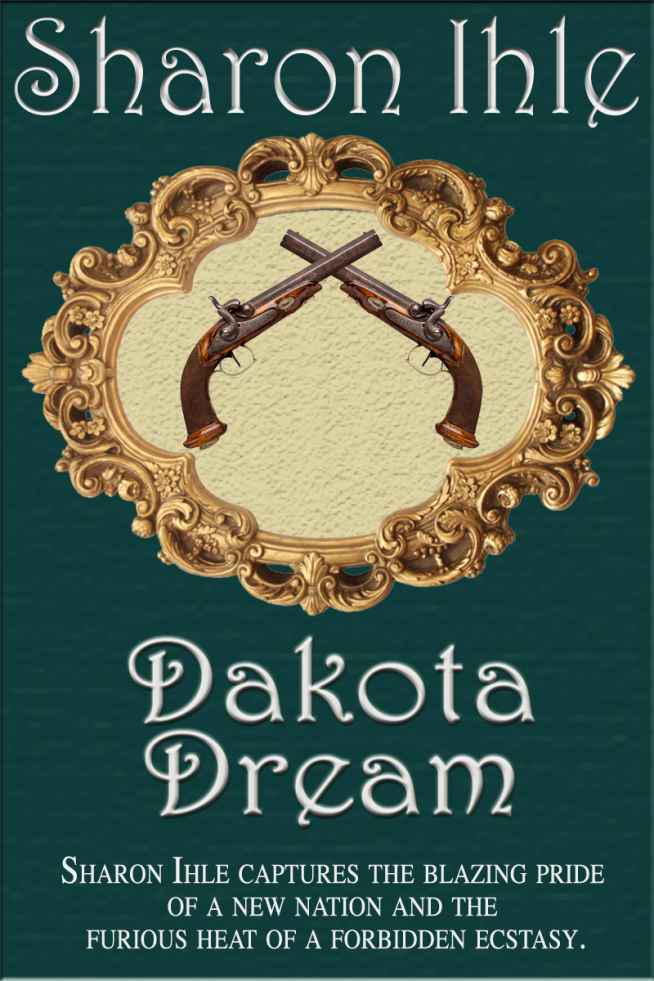 Recipient of Romantic Times’ Best Western Historical Romance (for The Law
And
Miss Penny) and
Bookrak’s
Best Selling Author Award (for The Bride Wore Spurs) and nominee for Romantic Times Career Achievement in Love and Laughter, as well as several other Reviewer’s Choice Award Nominations.

Romantic Times on Dakota Dream: “A stirring love story destined to intrigue Indian romance fans. This is a beautiful story of a forbidden love that survives prejudice and war.”

Copyright © 1991 Sharon J. Ihle. All rights reserved. With the exception of quotes used in reviews, this book may not be reproduced or used in whole or in part by any means existing without written permission from the author.

First published by the Berkley Publishing Group
, a Diamond
Book

published
by arrangement with the author.
.

Other Electronic Books by Sharon Ihle

To my loving North Dakota hubby, Larry-inspiration for all that I do and

to
the marvelous Carroll clan of Moffit, N.D.—with many thanks

Grateful acknowledgment is made to Farrar, Straus and Giroux, Inc., for the excerpts from
The Ladies' Oracle
by Cornelius Agrippa, copyright © 1962 by Hugh Evelyn Limited

The
Bismarck Tribune,
P.O. Box 1498, Bismarck, N.D. 58502 for permission to use titles and verses from their cassette,
The Songs of the Seventh Cavalry.

Special thanks to the North Dakota Parks and Recreation Department and the Custer Battlefield Preservation Committee.

Dominique DuBois was as bare as a winter landscape and twice as cold.
How can this be?
she
wondered, fighting her way to consciousness.

Her survival mechanisms jerked a tremendous shudder along her spine, spawning chattering teeth and limbs that twitched with rhythmic spasms. Dominique slowly lifted a frozen hand toward her mouth for a puff of hot breath, but on the way her fingers caught in a nest of warmth.

What had happened? Where was she?

Too disoriented to question the origin of the life-preserving heat, too thankful to care, she snuggled against it and pressed her face into silken curls.

"So it seems you will live, my golden treasure from the river.''

The man's voice startled her.

Dominique opened her eyes, but could focus only on darkness. Was it the black of night, or a shuttered room of some kind?
A bad dream, or had she died?
She opened her mouth to speak, but could only manage a hoarse gurgle.

"Easy, golden one," the deep voice crooned. "Let me help your blood to thaw. Soon it will again rush through your veins like hot springs."

As he spoke, his powerful hands slid down her back and cupped her derriere. Squeezing her damp, frigid flesh
with his strong grip, the stranger drew her against the length of his body as he lay down on top of her.

Gathering her meager strength, she pushed against the warm mat of chest hair.
"
Aahh
, g-
ge
-e-t a-
awa
-a-y!"

His laughter taunted her as she struggled for breath and the energy with which to fight him. But in her condition, she was no match for her three-year-old godchild, much less a full-grown man. Dominique collapsed against the coarse blanket stretched beneath her.

"That is better, golden one. Relax," he instructed as he slid a muscular leg between her knees, "and I shall warm you in a way you've never been warmed before—in the Lakota way."

"Ah, yes. Your life has been returned to you by a great Lakota warrior. I will help to grow strong again here in my tipi."

"Lakota?"
she repeated, trying to make sense of all this information as it merged in her mind.
"Tipi?
You're an
Indian?"

He laughed, the sound dark and sinister, tinged with sarcasm.
"Yes, woman.
You lie in the arms of a savage."

Still confused, Dominique said, "But you speak English. I don't understand, I don't—"

"Quiet," he ordered as he pulled an enormous buffalo robe across their bodies. "You do not have to understand—you need only to obey. Now let me warm you."

In a daze, Dominique acquiesced as the Lakota tucked the edges of the robe beneath her shoulders. She'd been rescued from a watery grave only to find herself captured by Indians? If anything she'd read in her secret collection of dime novels was true, this savage would be happy only after he managed to rape, torture,
then
kill her. Dominique took a deep breath and renewed her struggles.
"
Pffft
. P-
pfff
-
tt
.
P-p-ff-t-
tt
."

The Indian's mocking laughter increased, telling her he realized that even though she'd swallowed gallons of Missouri River water, her mouth was as dry as the Great Plains in August. She sucked in her cheeks, drawing every drop of moisture from the inside of her mouth, and tried again.
"
PfFft
. P-p-
ffff
-
ttt
."

Jacob Redfoot wiped the tiny drop of spittle from his forehead and grinned. "If you wish to frighten me like a fierce mountain cat, you will have to do better than that."

Her flesh and spirit warming, her fear replaced by a growing indignation, Dominique folded her fingers into a half-fist and braced her elbows against his chest. "L-
et
me
go."

"If I do that, you will die. The river chose to spit you out and drop you at my feet—a sign you were meant to live. I must accept you, my gift, or offend the Great Spirit.'' He brought his hands up from beneath the buffalo robe and jerked her arms over her head. "Do not fight me. Let me do what I must."

Knowing if the woman didn't accept the heat from his body soon, her chances of survival would be cut in
half,
Redfoot maneuvered his knees and easily pried her powerless thighs apart. Then he slipped his hips in between them.

As he released her wrists and dragged his fingers through her damp hair, he whispered, "It is said a white woman would rather die than have an Indian put his hands on her. Is the heat of my flesh really so terrible that you would prefer to give up your life?" He punctuated the question by cupping her chilled breasts in his warm hands and gently brushing the tip of each with his mouth.

Peculiar sensations fluttered deep within her as the Indian's caresses grew bolder. Instead of finding the strength the icy waters had stolen from her, Dominique's body sank further into weakness. But her mind cleared.

"Unhand me, you brute. I swear, if you—if you even
think
about ... violating me, my papa will have you drawn and quartered."

Having anticipated her confusion and fear but not her anger, Redfoot leaned back and peered down at her shadowy outline. Did she think he meant to force himself upon her helpless body?

Amused, he laughed. "
Your
... papa? He owes me more than ten good ponies for pulling you from the river. Now still your wiggling tongue. I grow tired of your nonsense."

Catching the hint of hesitation in his voice, and an underlying gentleness, Dominique decided the forbidden novels had painted too simple and savage a picture of the Indians. She set her chin and tried another tack. "I demand you return me to Bismarck.
At once."

"You—you
demand
?" Redfoot gripped her shoulders, his patience with the golden-haired woman rapidly waning. "You will do as I say. And I say, be quiet."

Dominique pursed her lips.
"As you wish."

She tested the inside of her mouth again and found moisture had finally returned. This time, when Dominique spit at her captor, the sound of a target well splattered greeted her ears.

"Enough." Redfoot raised his arm and brought his open hand across her cheek in a hard slap.