Read Dance of the Crystal Online 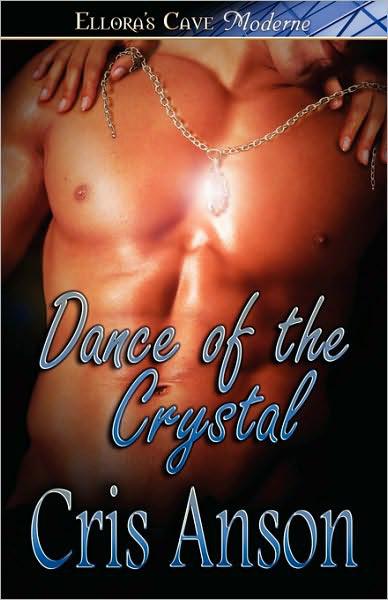 This book may not be reproduced or used in whole or in part by any means existing without written permission from the publisher, Ellora’s Cave Publishing, Inc.® 1056 Home Avenue, Akron OH

The following material contains graphic sexual content meant for mature readers.This book has been rated E–rotic by a minimum of three independent reviewers.

E-
rotic
love scenes are explicit, leave nothing to the imagination, and are high in volume per the overall word count. In addition, some E-rated titles might contain fantasy material that some readers find objectionable, such as bondage, submission, same sex encounters, forced seductions, and so forth.

E-ratedtitles are the most graphic titles we carry; it is common, for instance, for an author to use words such as “fucking”, “cock”, “pussy”, and such within their work of literature.

X-
treme
titles differ from E-rated titles only in plot premise and storylineexecution. Unlike E-rated titles, stories designated with the letter X tend to contain controversial subject matter not for the faint of heart.

I’d like to acknowledge the assistance of my terrific editor, Sue-Ellen Gower, in the writing of this book.

It was a time of great personal upheaval, which engendered crippling self-doubt, but she steadfastly insisted that I had the ability to bring Soren out from under Magnus’ shadow into the hero he became.

Thanks also to Kristin, the model for my heroine, from her unruly hair and dazzling smile to…well, you know.

And last, my everlasting love and gratitude to my two Adolphs—so different, yet so much alike. I miss you both.

To learn how newlyweds Kat Donaldson and Magnus Thorvald met, pick up a copy of DANCE OF

THE BUTTERFLY. And for an introduction into The Platinum Society, along with Lyssa Markham and Robert Savidge’s story, don’t miss the first book in this series, DANCE OF THE SEVEN VEILS.

“But I don’t
want
to buy a bachelor!” Crystal D’Angelo stamped her dainty, stockinged foot to underscore her point. And promptly regretted it. She had stubbed her little toe on the carved post at the foot of her canopy bed. Again.

“Don’t take me literally, young lady. You’re not buying a bachelor. You’re just buying the opportunity to buy a bachelor a dinner.”

Crystal tried to give her grandmother the evil eye. She’d never gotten the hang of it so wasn’t surprised it didn’t work. Looking like a queen in a white sequined gown covering her from neck to wrists to ankles, Rowena D’Angelo sat on the antique wedding ring quilt and calmly waved two tickets in the air. “You know I support the Battered Women’s fund-raiser every year. It just so happens that this year they came up with the bachelor auction idea. Call it kismet that it occurs on the eve of your thirtieth birthday. I’m giving you a birthday present you won’t soon forget. Now put your shoes on and let’s go. We don’t want to be late.”

With a sigh, Crystal slipped into the three-inch heels she wore to lengthen her five-foot-three height. She gave herself a quick once-over in the cheval mirror. Another inch or two had been added by virtue of having her curly black hair piled atop her head and held in place by dozens of pins. A red satin sheath with delicate spaghetti straps covered her well-rounded curves in an unbroken line to the floor, another trick to make her look taller. What she called chandelier earrings dangled from her pierced ears, throwing off many-colored sparks as light bounced off their crystal facets.

She caressed the large, asymmetrical crystal dangling on a delicate golden chain around her neck. As far as she could tell, none of the magic ascribed to it had ever touched her since her thirteenth birthday when Grandma had passed it on to her.

As if reading her thoughts, the older woman said, “Like fine wine, the best things happen in their own good time. Tonight may just be the night for magic. And you’ll know when it happens.”

Crystal shook her head as if to say,
I doubt it
. She heard a
ping
as a hairpin bounced onto the dresser, and felt an ebony curl fall down to her ear. “Darn it, can’t I even once fix my hair and have it stay there?”

Retrieving the errant pin, she jabbed the curl back into place.

Picking up her tiny, red silk evening bag, she checked its contents—lipstick, compact, car and house keys, ten dollars for emergencies, grabbed her matching red wrap and followed her only living relative downstairs and to the front door of her cozy Cape Cod home.

They walked outside to a mild April evening in suburban Philadelphia. Crystal flicked the remote opener to her sun-yellow Beetle and helped Rowena into the passenger seat, smiling at the fact that Rowena had taken her unique, hand-carved cane with her. Crystal knew for a fact that her grandmother didn’t need it, but used it as a prop.

What she didn’t know was what was inside that prop.

“I haven’t worn a tie in years,” Soren Thorvald grumbled as he tried for the third time to master the knot on the red silk tie he’d borrowed from his younger brother. The only place he felt at home was behind the bar at his pub. All a bartender had to do was fill orders and act as though he was listening. What the hell was he doing, getting ready to go on stage in front of a live audience and pretend to be a social animal? Good Christ, he’d have to actually smile at the woman who won his ticket. And, worse yet,
talk
to her, sit across a dinner table from her. He hoped he and not the winner chose the restaurant. He’d pick a pizza parlor. Or a fast-food joint. The faster, the better.

“It’s like riding a bike,” said Rolf with a wicked grin. “Or fucking. You never forget how.”

Soren turned an ice-blue glare at him. “Just because you hump everything in skirts.”

“Stifle it, okay? I’m done fussing with this noose. If they kick me off because my tie isn’t knotted right, I’ll be one happy camper.” Soren ran a finger inside the collar of his brand-new white dress shirt. Damn size seventeen neck was too tight. “I still can’t believe I let you talk me into this.”

“How many times have you told me that a successful businessman should give something back to the community? Don’t go turning into a grinch just because you have to wear a tie.”

In lieu of a comb, Soren ran his hands through the blond waves on his head, grabbed the navy blazer he’d just taken the price tag off of, and shoved his arms into the sleeves. That was all the concession he’d make. Shirt, tie, blazer. And jeans. If they didn’t like it, they could just bar him from the hotel. Damn blazer was too tight too. Well, when you’re six-three and a forty-four long and need it the same day, you take what’s on the rack. “Let’s get it over with.”

“Our next bachelor is an ex Marine who owns Thor’s Hammer, a bar-restaurant in nearby Allendale.”

Seated at a small round table near the front of the stage, Rowena perked up as the announcer hawked his wares at the podium. “This one sounds like a winner.”

“Oh, puh-leeze.” Crystal fingered her amulet, as she often did when nervous. “Ex-Marine? Bar owner?

He’s probably a tobacco-chewing redneck who drives a big truck. I think you’re going to have to be satisfied with just the price of our tickets for your donation. There’s only a couple of slabs of beef left.”

Rowena chuckled. “It’s more than a meat market, child. I’m getting vibes from my cane.”

“What?” Crystal swung her head toward her grandmother, dislodging another couple of pins from her upswept hair. She sighed and relegated them to the “lost” pile on the floor, tucking the fallen tresses behind her ear.

“Here.” Rowena handed the cane to Crystal. “Feel it. The knob.”

Like a dutiful granddaughter, Crystal accepted the cane. And felt the blood drain from her face. The head of it felt like…like…

She thrust it back to Rowena and made a big show of turning her attention to the stage. It felt just like she imagined a cock to feel, smooth, hard, a ridge running around the head, the opening like an omniscient eye—

And then it hit her. It was warm. The cane was warmer than wood should be in this air-conditioned ballroom.

Well, of course it was. Grandma had warmed it with her hands and tried to suggest something otherworldly was happening. Crystal took a long sip of her white wine to slow her accelerated heartbeat.

She shouldn’t be so suggestible.

Grudgingly Crystal raised her gaze to the latest bachelor. And gasped.

It felt like her amulet had sent out an electric shock to the skin between her breasts.

She leaned forward, the crystal swinging away from her body, and rubbed her skin where the stone had lain.

“Is something the matter, dear?” Rowena asked her.

Take a deep breath. “No, Grandma, I’m fine.” She fought the impulse to look at Bachelor Soren Thorvald. And lost.

The moment she raised her lashes and looked to the stage, a pair of glacier-blue eyes laser-locked onto her gaze. Oh God, he was so…big.

She noted how he towered over the announcer. Noted how his broad shoulders and square jaw reminded her of Dudley Do-Right, the cartoon mounted policeman. How his tie, the same bright red color as her gown, lay loose and askew under his unbuttoned collar. How the worn jeans molded to muscular thighs.

A sharp nudge to her shoulder broke her concentration on this giant, and she realized she was holding aloft the numbered paddle the ticket-taker had given Rowena when they entered the ballroom. Her heart stuttered then pounded back double time.

Her grandmother had won the bid for Soren Thorvald.

And she’d put the paddle in Crystal’s hand while she’d been in never-never land.

Ohmigod, what was she going to
do
with him?

“Will the winning bidder please come on stage and claim her prize?”

Crystal jerked her hand down and thrust the paddle into Rowena’s lap. The slight dip of her shoulder caused her spaghetti strap to slide down and drape across her upper arm, dragging some of her bodice with it to expose more of her breast than was proper. Feeling her face flame, she tugged and jiggled until everything was back in place.