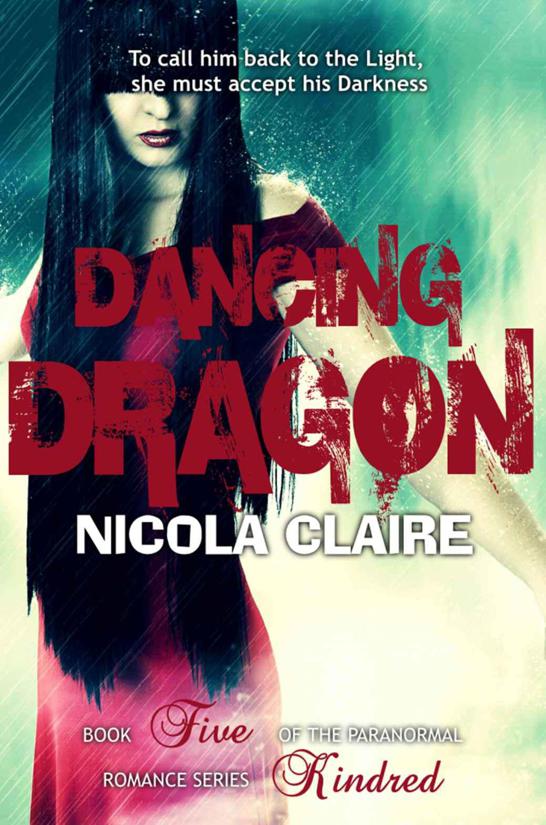 Book Five in the Kindred Series

This book is a work of fiction. The names, characters, places and incidents are products of the writer's imagination or have been used fictitiously and are not to be construed as real. Any resemblance to persons, living or dead, actual events, locales or organisations is entirely coincidental.

My special thanks to Minette of
Red Cherry Graphic Design
for her expertise, unfailing support and precious time, making the
Kindred Series
look as sexy as it deserves.

Entwined With The Dark

For: My Mum and Dad,

who taught me the meaning of a loving relationship.

Thanks for showing me what love can overcome.

There is no cutting corners when publishing a book. Even a self published author has a lot of help. The Kindred Series would not exist if I hadn't have had an enormous amount of support, guidance and aid throughout. Any author will tell you, there are many people to acknowledge and thank, their contributions essential in presenting a polished, professional and worthy story. It just so happens that my many people come in the form of one. My husband.

As my beta reader he has kept me on track, making sure Lucinda and Michel, and the many creatures that traverse the Kindred world, remain within the parameters set. When the story doesn't make sense, he lets me know. When I could have done better, he encourages me to dig deep, offering a sounding board and brainstorming buddy, adding a little
clever
into the mix.

As my editor he corrects the multitude of spelling mistakes and grammatical errors that grace the page when I'm too caught up in the action to stop and check. He makes sure the story flows, cutting out the superfluous and maintaining continuity.

As my cheerleader he's the first to point out new favourable reviews, the first to tell me he is impressed, the first to congratulate, to encourage, to pick me up when I doubt. And even when I don't get it right, he still tells me I'm the best.

So, thanks! To my husband: Tony. My beta reader, my editor, my cheerleader - my kindred.

Accord
–
A blood binding agreement, often between two parties of equal power; cannot be broken.

Alliance
–
A word of honour agreement; has varying degrees of binding, some alliances cannot be broken.

Blood Bond
–
A binding connection between master and servant, requiring the exchange of blood to seal. It can only be broken by someone more powerful than the master who created it. A blood bond establishes a close relationship between the blood bonded. The master provides safety and protection, the servant offers obedience and loyalty.

Bond
–
The connection between joined kindred Nosferatu and Nosferatin; reflects the emotional and psychological relationship. Enables both parties to find each other over distance; to perform whatever is required to get to that person, overcoming any obstacle; to direct thoughts to each other; to feed off the life force of each other. It is always an equal exchange.

Command
–
A directive given by a Master vampire to one of his line. It requires
Sanguis Vitam
in order to enforce obedience. It cannot be ignored.

Dream Walk
–
A Nosferatin power, enabling the Nosferatin to appear in a different location. The Dream Walker is invisible, cannot be sensed or smelled, and only heard if they talk when in this realm. They can, however, interact and be harmed. The only exception to a Dream Walker's invisibility is another Nosferatin. Two Dream Walks in a 24 hour period results in prolonged unconsciousness once the Dream Walker returns to their body. A very rare power.

Elska
–
(Fey) Literally
love
. An
elska
is a
mœðr.
A member of the Fey can only ever have one
elska
in their lives. They are in tune with the Light or
ljós
within their matched fairy and potentially will become their one true love.

Final death
–
The true death of a Nosferatu. There can be no survival from the final death.

Glaze
–
The ability to influence another. It requires direct eye contact and
Sanguis Vitam
to insert the influence. Usually a Nosferatu skill, allowing a vampire to influence a human.

Herald
–
The Nosferatin who recognises the Prophesy. It is the Herald's responsibility to acknowledge the
Sanguis Vitam Cupitor
and thereby initiate the Prophesy.

Iunctio
–
(Latin). The Nosferatu connection and governing power. All vampires are connected to one another via this supernatural information exchange highway; enabling sharing of rules, locations of safe havens and hot spots to avoid. It is powered by both Nosferatu and Nosferatin
Sanguis Vitam
, but is operated by the Nosferatu in Paris. There are twelve members of the
Iunctio
council, headed by the Champion. The
Iunctio
is tasked with policing all supernaturals throughout the world.

Kindred
–
A Nosferatu or Nosferatin sacred match, a suitable partner for a joining. To be a kindred there must exist a connection between the Nosferatu and Nosferatin; only those suitably compatible will be kindred to the other.

Line
–
The family of a master vampire, all members of which have been turned by the master, or accepted via blood bond into the fold.

Lux Lucis Tribuo
–
(Latin) The Giver of Light. The third part of the Prophesy. The
Lux Lucis Tribuo
is charged with balancing the Dark in Dark vampires out with their Light.

Master of the City
–
A level one Master in control of a territory; a city.

Norm
–
A human unaware of the supernaturals who walk the Earth. They also do not have any supernatural abilities themselves.

Nosferatin
–
(
Nosferat–een)
-
A vampire hunter by birth. Nosferatin were once of the same ilk as Nosferatu, descendants from the same ancestors, or God. The Nosferatin broke off and turned towards the Light. Their sole purpose is to bring the Nosferatu back from the Dark, this can include dispatching them, bringing them the final death, when they cannot be saved. They are now a mix of human and Nosferatin genetics.

Nosferatu
–
A vampire. The Nosferatu turned towards the Dark, when their kin, the Nosferatin turned towards the Light. They require blood to survive and can be harmed by UV exposure and silver. They do not need to breathe or have a heartbeat. They are considered the undead.

Prohibitum Bibere
–
(Latin) The Forbidden Drink. The second part of the Prophesy. The
Prohibitum Bibere
is a siren to the Dark vampires throughout the world, calling their Darkness towards the Light.

Pull
–
The Nosferatin sense of evil. Guides a hunter to a Dark vampire; sometimes, but not always a rogue, who is about to feed off an innocent.

Rogue
–
A vampire no longer controlled by a master, full of evil and Darkness, feeding indiscriminately and uncontrolled.

Sanguis Vitam
–
(Latin) The Blood Life or life force of a Nosferatu. It represents the power they possess. There are varying degrees of
Sanguis Vitam
.

Tego Texi Tectum
– (Latin) To cover, protect and shield. Referring to a vampire power of guarding and sheltering themselves and others from certain magical powers.

Turned
–
The action of changing a human into a vampire.

Umskipti
–
(Fey) Changeling. A member of the Fey used to replace human children who were identified as
mœðr
. The changeling takes on the form of the stolen child and fools the human parents until adulthood, when they simply disappear. Fey stole human children to improve fertility in
Álfheimr
. The stolen human child is raised in Faerie as one of their own to breed fey.

Vinr
–
(Fey) Vanguard. The first of the Fey to cross a portal. Their job is to ensure it is safe for other fey to follow.

Angels Twice Descending by Cassandra Clare, Robin Wasserman
Broken by Man, Alina
The Companions of Tartiël by Jeff Wilcox
Ripples in the Sand (The Sea Witch Voyages) by Hollick, Helen
Every Young Man's Dream by Derek Price
For King and Country by Annie Wilkinson
Crown of Cinders (Imdalind Series Book 7) by Rebecca Ethington
Selling it All by Josie Daleiden
The Siege by Nick Brown
The Untethered Soul by Jefferson A. Singer