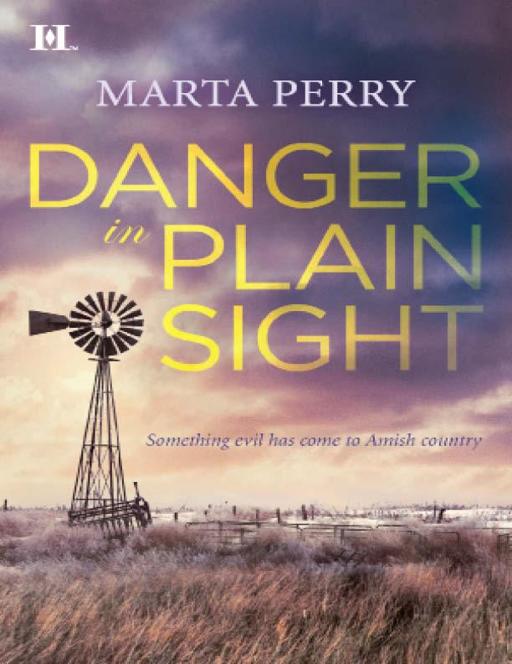 Coming home may be more dangerous than she thinks...

Libby Morgan never wanted to return to Lancaster County. She’d made her own life in the city as a news photographer, leaving the slow pace of Amish country behind. She’d left love behind, too, when she fled the old-fashioned ways of Adam Byler. But when a friend in trouble beckons, Libby knows she has no choice. What she doesn’t know is that something sinister awaits her....

For Adam Byler, the traditional ways convey safety and order. As police chief of Springville, the former marine strives to keep the peace between the Amish and their modern “Englischer” neighbors—and he will not allow Libby’s beauty to distract him from his duties. But when an innocent woman is attacked, they’ll confront a danger more threatening than their growing passion.

“Marta Perry illuminates the differences between the Amish community and the larger society with an obvious care and respect for ways and beliefs…. She weaves these differences into the story with a deft hand, drawing the reader into a suspenseful, continually moving plot.”
—Fresh Fiction
on
Murder in Plain Sight

“
Leah’s Choice
takes us into the heart of Amish country and the Pennsylvania Dutch and shows us the struggles of the Amish community as the outside world continues to clash with the Plain ways. This is a story of grace and servitude as well as a story of difficult choices and heartbreaking realities. It touched my heart. I think the world of Amish fiction has found a new champion.”
—Lenora Worth, author of
Code of Honor

“Marta Perry delivers a strong story of tension, fear and trepidation.
Season of Secrets
(4.5 stars) is an excellent mystery that’s certain to keep you in constant suspense. While love is a powerful entity in this story, danger is never too far behind.”
—RT Book Reviews,
Top Pick

“In this beautifully told tale, Marta Perry writes with the gentle cadence and rich detail of someone who understands the Amish well.
Leah’s Choice
kept me reading long into the night.”
—Linda Goodnight, author of
Finding Her Way Home

Thank you for deciding to read this third book in my Amish suspense series. As a lifelong resident of rural Pennsylvania, I have always lived near the Plain People. My own family heritage is Pennsylvania Dutch, so it has been a pleasure and a challenge to draw on those experiences in my books.

It can be difficult for outsiders to understand the constraints in the Amish community that prevent them from calling on the police or seeking legal help in any but extraordinary situations. Some outsiders think this attitude is foolish, while others seek to take advantage of it, knowing that it is rare for the Amish to involve the police in their troubles. In truth, most Amish are among the most law-abiding people one could meet, and their belief in nonviolence is a significant part of the core of their faith.

In this story, Libby Morgan returns home to Lancaster County to help her dearest friend, an Amish teacher, but she arrives too late. Esther has been critically injured in a hit-and-run accident, and convincing both the Amish community and the police that Esther is still in danger has life-threatening consequences. I’ve tried to present Amish belief and practices as honestly and respectfully as I can, and any errors are my own.

I hope you’ll let me know how you like my book, and I’d love to send you a signed bookmark and my free brochure of Pennsylvania Dutch recipes. You can email me at [email protected], visit me on the web at www.martaperry.com or on Facebook at Marta Perry books, or write to me at HQN Books, 233 Broadway, Suite 1001, New York, NY 10279.

This story is dedicated to those of my friends who like mysteries best. And, as always, to Brian.

I’d like to express my thanks to all those whose expertise helped me in writing this book: to Erik Wesner, whose Amish America blog is enormously helpful; to Donald Kraybill andJohn Hostetler, whose books are the definitive resources on Amish life and beliefs; to thePlain People I have known and respected; and to my family, for giving me such a rich heritage on which to draw.

The righteousness of the blameless
makes a straight way for them, but the wicked
are brought down by their own wickedness.

AMISH BUGGIES WEREN’T built for speed. If the men were following her, she couldn’t outrun them.

Esther Zook shivered in the December cold, turning her head to peer behind her, her view narrowed by the brim of her bonnet.

Nothing. The township road lay dark and empty behind the buggy…as dark as every farmhouse she’d passed, surrounded by their blankets of snow. Country people went to bed early in the winter, especially the Amish, without electric lights and televisions to keep them awake.

Libby Morgan would be awake, though. If she could get to Libby, everything would be all right. Libby would know what to do.

If only she’d told Libby more in her letters…but Esther hadn’t known, then, just how frightening this was.

The Amish didn’t go to the law. They settled matters among themselves. But the Amish of Spring Township had never dealt with a problem like this before.

Esther had shrunk from putting her suspicions down in black and white, thinking that when Libby returned it would be time enough to seek her advice. But now suspicion had turned to certainty, and she feared she had delayed too long. If they were following her—

Even as she thought it, she heard the roar of an engine behind her. Panic sent her heart racing; she tried to think, tried to pray, but it was too late. The roar turned to a scream, to a crash which deafened her, to total blackness.

IT WAS NICE to see someone else’s love life turning out well, especially when her own was such a train wreck, Libby Morgan decided. Now that her big brother Trey was married, Mom could turn her obvious desire for grandchildren to Trey and Jessica and stop asking her only daughter if she’d met anyone special yet.

Libby put down the bridesmaid’s bouquet she’d been clutching for what seemed like hours and picked up her camera instead. She’d discovered long ago that the camera could be useful camouflage. It would help her get through the rest of the wedding reception without, she hoped, too much conversation with people who’d known her from childhood and seemed compelled to try and find out how her life was going.

Then, once the flurry of wedding-related activities were over, she’d be free to dig into the other reason she’d come home to Spring Township, deep in Pennsylvania’s Amish country.

But I fear this is one time when we should. I must talk to you as soon as you get home. You know the Englisch world. You’ll be able to tell me if I’m right about this.

Libby snapped off a few shots, more to keep the camera in front of her face than anything else. She hadn’t reached Pennsylvania from San Francisco as early as she’d intended, partly because of the weather, but mainly because of the upset at the newspaper that had led to a final showdown with her boss…final in more ways than one.

Well, maybe she could set up in business as a wedding photographer. She framed Trey and Jessica in the pine-wreathed archway of the Springville Inn’s ballroom, seeming oblivious of everything but each other, and snapped several quick shots.

“No doubt about how those two feel.”

That particular deep male voice, coming from close behind her, made her hands jerk so that she undoubtedly got a great picture of the parquet floor. She turned, arranging a smile on her face. She’d had plenty of practice since fate, in the form of the bride, had paired her with Police Chief Adam Byler for the wedding.

“There isn’t, is there? This is one relationship that’s destined to last.”

As opposed to ours, which lasted for about a minute and a half.
That being the case, why did she persist in comparing every man she met to Adam Byler?

Adam’s slate-blue eyes didn’t show any sign he caught an undercurrent in her words. But then, he wouldn’t. Strong features, brown hair in a military cut, equally military posture—stoic didn’t begin to describe Adam. Whatever he felt wouldn’t be easily read on his face.

“I was beginning to think Trey would never take the plunge, especially after your dad’s death, when he had to take over the company.” Adam flicked an assessing glance at her face, as if wondering whether she could take a casual reference to the loss of her father, over a year and a half ago now.

She tried for a stoic expression of her own. “Trey’s had his hands full, I know.” She raised an eyebrow, casually, she hoped. “Or were you implying that I should have come home to take on some of the burden?”