Read Dangerous for You Online 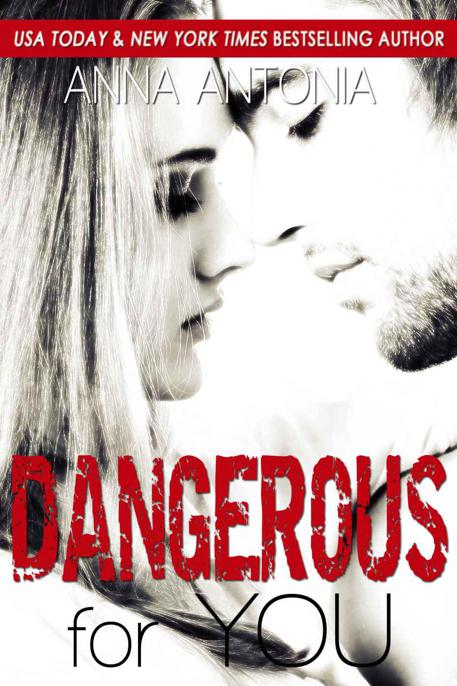 All rights reserved. No part of this book shall be reproduced or transmitted in any form or by any means without prior written permission from DelSin Publishing, LLC. DelSin Publishing, LLC and the author assume no liability assumed for damages resulting from the use of the information contained herein.

This is a work of fiction. Names, characters, places, and incidents either are the product of the author’s imagination or are used fictitiously. Any resemblance to actual events, locations, or persons, living or dead, is entirely coincidental.

…
Love is most dangerous when it comes late in life.

I never claimed to be a psychic nor was I particularly superstitious.

I never won the lottery—not even the ones with free ticket prizes. I was no more likely to call a coin toss correctly than the odds of probability predicted. And though I’d never found a four-leaf clover, I didn’t entirely disbelieve that one could step on a crack and break their mother’s back.

Yet, when Gabriel got back from Munich somehow I
knew
something terrible was coming our way. Although I’d made it through my personal journey and had reached the point where I was all in with Gabriel, I couldn’t fully shake off the gloom that things could
really
be this easy.

It was so sweet, this thing between us. Mostly living together, playing roughly when the mood struck, and making the mundane wonderful—we were taking all the steps of a life moving forward to a permanent future.

I really wanted it.

It’s just like me—always wanting what I shouldn’t want.

Now here we were on the precipice of everything I feared when I allowed myself to admit how much I loved and needed Gabriel Gordon. When I realized I never wanted to live without him.

When I saw myself truly and forever being his…

I allowed a brief glance into his exquisite eyes. Normally the emotion blazing from them was because we were engaged in a beautiful carnal array of passion. Instead, fury crackled, turning Gabriel’s pupils into tiny pinpoints of supreme rage.

It was a strange facsimile of our first real battle, back when I found out about Embry. I’d welcome that right now. Except this time there was no physical door between us, only the steely stare of the man who’d threatened to take away everything we’d worked so hard for from us.

Although I shouldn’t dare show weakness, I couldn’t keep my back as straight as it needed to be when all I wanted was to curl into Gabriel and pretend this wasn’t happening.

But I didn’t run away. I couldn’t. Not when my whole existence with the one man I’d ever loved was at stake.

“Our Gabriel had a beautifully planned life before he met you, Emma. You’re ruining all that. Again.”

Before I got a chance to answer, Gabriel exploded. “Don’t you dare say that to her! Emma saved me, Lucas!”

The older man’s scornful expression couldn’t hide the fury lying beneath his softly spoken words. “Saved you from what? A successful career? A beautiful wife whose family could be counted on for support? What, Gabriel? Tell us both because I fail to see the downside to your previous life, but I see plenty for your current one.”

No longer the center of contention but most definitely the cause, I stood there silent and fixed in one spot as the storm of words flowed around me. It was a blizzard, freezing me bit by bit

“I’ve already explained this to you. That beautiful life you’re going on about had no substance.”

“Substance. Our family coffers and prestige would disagree.”

“There’s more to life than money and power, Lucas.”

“Really?” He made a great show of looking about him. “That’s why you leased this penthouse instead of choosing to live next door to your lady love. What? Couldn’t live the simple life for long, son?”

“My reasons are my own and have nothing to do with what you think you know.”

“Oh, I can imagine. And when the passion’s gone, Gabriel, what then? What happens when the novelty wears off and all the differences between you are no longer so…how should I say it…
cute
?”

“She’s not a novelty. I love her and I want to marry—”

“For now! Love turns into poison once a lifetime of regret sets in. Don’t you understand that yet? Hasn’t our family history shown you enough?”

“I’m not you, Lucas, nor am I my father. I love Emma. I always have and I’m not giving her up again.”

“Really? Let me tell you what will happen when that love fades—you’ll resent Emma for not being what she’s incapable of being. When you’re snubbed time and time again for her being in your life, when your children must bear the weight of her upbringing, the taunts of being less than, then you’ll regret not being with someone from your own background.”

“Background, huh? You and Father stayed within the circle of your own background. WASP and blue-blooded till the end.” Cruelty touched my lover’s face. “We all know how well that worked out for our little family, don’t we?”

“Yes, and that is why I’m doing my damnedest to make sure you do better.”

“Don’t even try to say you’re doing this for me. You’re just worried about what society will say and what they’ll interpret it to mean for the Gordon name.”

“Believe what you will, Gabriel. You always do.” Lucas turned to me, neatly sending his poison darts in my direction. “Look what you’re already doing to our family. You claim to love Gabriel, but if you really loved him you wouldn’t be this selfish and put him in this situation, would you?”

I remembered Embry’s words were nearly the same. Who would’ve thought that love could be so dangerous? Maybe it wasn’t love. Maybe it was just me.

“I do love your nephew, Mr. Gordon. All I want is his happiness.” As far as opening volleys went it lacked heat but not sincerity.

If anything, my declaration only seemed to anger Lucas further. “And you think it will be with you.”

“And if loving you destroys everything Gabriel has worked so hard for—what then?”

I didn’t have to answer. My face betrayed everything.

I can’t let that happen.

Gabriel’s brows snapped together. Desperation underscored his command. “Emma, don’t you dare listen to him! He’s just trying to get in your head!”

Mr. Gordon, how do you like my head so far? Do want to push on my brain a little harder? I think that you do. Try this spot here. It runs straight to my heart.

“Of course, she’s listening. I’m already there, can’t you see?”

I didn’t deny it. Gabriel’s frustration crackled. I wanted to apologize for not being able to deflect his uncle. I was born about a hundred years too late to win against Lucas.

Confident again in his control of the situation, Lucas Gordon smiled. A voice smooth as honey, one designed to delight the senses before shredding everything asunder, poured into the small space between us.

“Regardless of her unfortunate background, your lovely friend is
quite
intelligent. After all, she must be to pull herself out of the gutter.”

It was rather painful to look at him, this person who was Gabriel’s uncle and not only his uncle, but his father’s identical twin. The resemblance between Lucas Gordon and Gabriel was uncannily close. To be looked at with contempt from a barely lined face that looked so much like my beloved’s—agony.

The gutter remark stung as it was designed to. I gathered my pride, having had long practice to defending myself from pointed barbs. I didn’t bleed then—I wouldn’t bleed now.

I tipped my chin up, arms left by my side to dangle with surface poise. I viewed Lucas as I would anyone who’d attacked me for their pleasure, without deference and without emotion. He held my attention, but I knew my expression would not betray me again.

“Throw me into a thousand gutters and I’ll climb out of every single one. Only the strong survive in this world, Mr. Gordon, and I’m strong.”

His broad smile was just like Gabriel’s. Identical in every way except for the flavor of malice. “That they do and so you are. Whether you’re capable of listening to reason is the question here…”

Gabriel immediately stepped between us, using his body to shield me from his uncle. “Emma, don’t talk to him. And you—don’t insult her.”

“How am I insulting her, Gabriel? I’m praising Emma for being able to rise above her family’s
extremely
humble beginnings. Ah, I mean her mother’s because Emma doesn’t have any other family to speak of, does she?”

The offended innocence in the elder Gordon’s purring tone might’ve had a better chance of being believed if it wasn’t accompanied by a faint sneer.

I stood there, visually unmoved because it was my only power in this situation when the words were true. I couldn’t lash out because I’d prove myself uncouth. I couldn’t show how much it hurt because then I’d have given that person confirmed power over my emotions.

All I could do was stand here and be like a statue that belonged on the empty pedestal in Gabriel’s foyer. He, on the other hand, didn’t suffer from my choices. Gabriel defended me without hesitation.

“Money can’t buy compassion or ethics, Lucas. Humble or not, Emma and her mother are better than you.”

I wanted to argue, to refute my lover’s condemnation of himself. Instead, I remained silent. Not because I wanted to, but because Gabriel wanted me to. A house divided was bound to fall. Lucas would pounce on any opportunity to drive a bigger wedge between us.

I wasn’t about to willingly hand him any ammunition. Still, I reached out and pressed my hand against Gabriel’s back.

I hoped Gabriel could sense my gratitude.

“Indeed.” Lucas stood up, approaching us with the insolent arrogance of a man who’d already been assured of victory. Gabriel shifted further until I could barely see his uncle.