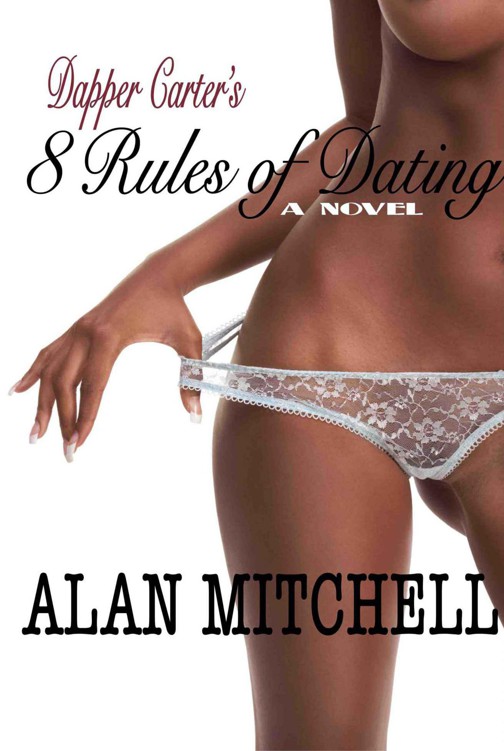 Alan
Mitchell Books are published by

This
is a work of fiction.  Names, character, places, and incidents either are
the product of the author’s imagination or are used fictitiously, and any
resemblance to actual persons, living or dead, or events is entirely
coincidental.  The setting is in Newark, New Jersey; Brooklyn, New York; and other locations.  Certain real locations and institutions are mentioned,
but the characters and events depicted are entirely fictional.

The
scanning, uploading, and distribution of the book via the Internet or via any
other means without the permission of the publisher is illegal and punishable
by law.  Please purchase only authorized electronic editions, and do not
participate in or encourage electronic piracy of copyrighted materials.
Your support of the author’s rights is appreciated.

“So, how’s married life treating you?”

I could no longer tell if that was my best friend
Caesar asking me that question or if it was the tiny voice deep down inside of me
inquiring. Caesar always had a way of asking the tough question, but he always
had a way of making sense too. The truth is that Caesar
was
the little
voice deep down inside of me at times. He represented my desire to be honest
with myself, which was something I was incapable of achieving right now.

“How do you think
married life is treating
me?  It’s after midnight and I’m sitting here in a strip club with you.”

I had what everyone thought was going to be the
perfect marriage. Kennedy Craig (KC) was my high school sweetheart. We were
from the same hometown, our families got along well, and her girlfriends even
liked me…at first. Then, the real Dapper Carter showed up to the party. He’s
moody, hates to be alone and hates to be with someone at the same time. And he doesn’t
really like to come home every night. Not the best recipe for a marriage.

Chicag-hoes
was my home away from home and the
grimiest of all the strip clubs near Newark Airport.  I was just as
comfortable in Beverly Hills as I was in Port Newark.  I had all the best
opportunities afforded to me but still I like to live on the edge and
maintained a strong affinity for the hood, not to mention its hood rats.

The hue of the blue and red lights bouncing off the
well-toned strippers’ bodies was more intoxicating to me than the Grey Goose
and Red Bull I sipped. I could never quite understand how combining a
depressant with a stimulant could cause a euphoric effect. But it did and that
was my drink of choice to get me revved up for the fun I was going to have that
night.

I fixed my eyes on the ultra fit Lollipop as she acrobatically
performed walkovers and
rabidly pirouetted around the brass pole hinting
of her classic dance background.  I committed all seven of the deadly sins
simultaneously in my already oversexed mind whenever I saw Slippery When Wet gyrated
in front of me finger-popping her pussy.  Of all the deadly sins my
favorite was lust, though I was pretty good at all of them to say the least.
The mouthwatering Miss Peanut Butta, creamy caramel skin and an ass like a
horse was climbing hand over hand up the forty-foot stripper’s pole then nose-dived
to the bottom, stopping on a dime one inch from the floor and rearranging her
picturesque face…butt ass naked.

“I don’t know how you do what you do,”
Caesar
said as he maniacally “made it rain” dollar bills all over Puss in Boots, the thicker-than-grits
Latina
whom we learned danced at night to pay her way through NYU Medical
School. It was cliché but education was expensive.  So I guess half of the
female doctors in the United States are probably former strippers.  That
should help my next prostate exam go down a little easier.

“Don’t know how I do what? Be married or fuck around
on her?”

"Be married, of course. I don't really care
what a nigga does on the side. I’m talking about looking at the same chick for
forever. Do you know the definition of forever?  Check this shit out.  No
other animal, except one, mates for life. You don't see two buffaloes chillin'
next to each other for life. By being with one woman, we are fighting against
nature and evolution.”

Caesar always had a unique way of looking at things.
He was my number one dawg and had been since the day we met in fifth grade.

“Damn man, why do you have to be so brutally
honest?”

“Real honesty
is
brutal, unfortunately, and
there is no way around it.”  The red light and siren wailed signaling that
it was “money time”.  All the ponies, colts, and stallions came from the
dressing room behind the stage.  One by one Trinity, Popsicle, Me Love You
Long Time, Hot Chocolate, Sexual Chocolate, Chocolate Thunder, Thunderpussy,
Lickity Splits, Holly Hood, Lorraina Bob It, Chitty Chitty Bang Bang, Sexy Lexi
and Strange` hit the stage and started working the crowd for lap dances.  The
stallions were old pros and knew to hit the stroll first before the newbies got
out there.     I usually would get two or three but not
tonight I was saving my dough for something special.

Next the ponies came out who had been dancing
for about a year.  They usually thought this was going to be temporary but
weeks turned into month, and months eventually will turn into years.

Last to come out were the fillies.  They
were young, usually around nineteen, shy, and new to dancing.  They hadn’t
stepped their lap dance game up to the level of the stallions and ponies but
they would learn quick.

“So which animal mates for life?”

“Get the fuck outta here! How do you know?”

That didn’t have shit to do with it. He just watched
a lot of Discovery Channel on those nights when he was home alone because no
one wanted to deal with his brutal honesty. Caesar shoved a twenty dollar bill
into The Clapper’s dental floss thong, making sure to cop a feel before
slapping her on her juicy booty.

“I’ve got so many bitches checking for me right now
that don’t know what to do with myself,” he boasted.

I don’t claim to have the greatest respect for women,
but I had more than he. Every once in a while he would aggravate me with his
Neanderthal references of the opposite sex. I used the word bitch a lot myself.
Too much, actually, but it was nowhere as much as Caesar did.  He actually
had a method to his madness.  For him, it was all about word placement. If
he started the sentence out with the word “bitch,” he used it like a pronoun and
to be dismissive.
Bitch, fuck you!
Now, if he
used it at the end of a sentence like an exclamation point, you have pissed him
off and now he’s trying to be hurtful.
Fuck you, bitch!

“How come every woman got to be a bitch?”

“Because that’s what they are to me, either a bitch or
a ho.” Caesar’s venom spit from his disparaging lips.  He was hardcore
like that and it was self inflicted.   “They all want some of Caesar,”
he boasted.

Caesar is not the best looking guy by any stretch of
the imagination and he knows it. He’s tall, about six-foot-four, gangly, and kind
of looks like the Warner Brothers’ frog.  But nonetheless, he’s
pretentious, articulate, undeniably confident and impeccably groomed, taking
extra special care of his hands and feet. Women
do
like him and confidence
will take you places you never thought you could go
.
And he actually is
a fucking genius, being tested with an IQ over 150.

“They all want some of Caesar’s money,” I countered as
we continued to covet the heavenly bodies in front of us while not so secretly thirsting
for Baton Rouge, the stallion of the stable. She was a redbone and proud of her
Creole look.  Hair black as coal waved down to the sexy Christmas tree at
the small of her magnificent back.  She had mammoth implants going up
three cup sizes from a D to a full double D, massive speed skater thighs, and a
tail like a New England lobster. She was as close to perfect as I had ever seen.

I had enough money on me so I could actually
afford to holla at her, but the queen bee didn’t come cheap. I had no problem
paying for pussy, because one way or another I was probably going to drop over
$150 on dinner, a movie, and drinks anyway, so I might as well just pay up
front and know how the evening is going to end, without a shadow of a doubt. Actually,
what I was doing was paying you to leave!

“I know I'm right. Niggas who don't have money
complain about spending money on a bitch. Niggas with money take that shit in
stride and know it's a part of the game. That's the difference between a player
and a baller.”

What Caesar philosophized was true, if you have the
money. He’s a big-time trader on the New York Stock Exchange, pulling in about
a million dollars a year with the top brokerage firm on this side of the Atlantic. It's what he always wanted to be. While the rest of us had our heads in the clouds
with false hopes of the NBA, Caesar fantasized about being president of the
Bank of New York. He’s not there yet, but there is no doubt in my mind that he
will get there someday.

Caesar dubbed his approach the "West
Coast Offense," short, quick strikes. He was all about the skins and he
would do whatever it took, or cost, to get 'em. Conversely, I played more of a
defensive game tailored to stopping the run, as in stopping a chick from
running all over me. Offense is pretty, scores a lot of points, and is exciting
to watch. But defense wins championships.

Caesar agreed while throwing back his fifth Hennessey
on the rocks. “So, you never answered my question. How is married life treating
you?”

“I’m cool. As long as I keep hitting Kennedy off right,
she ain’t going anywhere.”

The truth of the matter was that we hadn’t had sex
in so long I was starting to wonder if maybe she was doing her thing on the
side too. I mean, everybody needs sex. Even if the two of you aren’t speaking, sooner
or later you're going to roll over onto that ass lying right next to you every night,
right?

I watched Baton Rouge work her way around the bar
until she finally reached me. But not before some idiot decided he was going to
pilfer an extra feel and stick his fingers in her chocha.  She cussed him
out royally and the bouncers kicked his ass royally.  The devious smile on
her unblemished face excited me.  It made me want her more, if that was
even possible.  She lap danced for me, unmercifully grinding her fat ass
against my stiffening manhood.  Then she whirled around and sadistically taunted
me by slapping my inebriated face with her impressive watermelons. While I contemplated
my next move, she rammed her tongue into my mouth and began to devour mine like
a greedy lion cub.

Another Me by Eva Wiseman
The Villa Triste by Lucretia Grindle
The Sequel by R. L. Stine
Big Book Of Lesbian Horse Stories by Surkis, Alisa
A Rage to Live by Roberta Latow
Love 'Em or Leave 'Em by Angie Stanton
Brightest and Best by Olivia Newport
Fried Pickles and the Fuzz by Calico Daniels
The Mighty Quinns: Logan by Kate Hoffmann
Music and Lies (George and Finn Book 1) by Gill-Marie Stewart