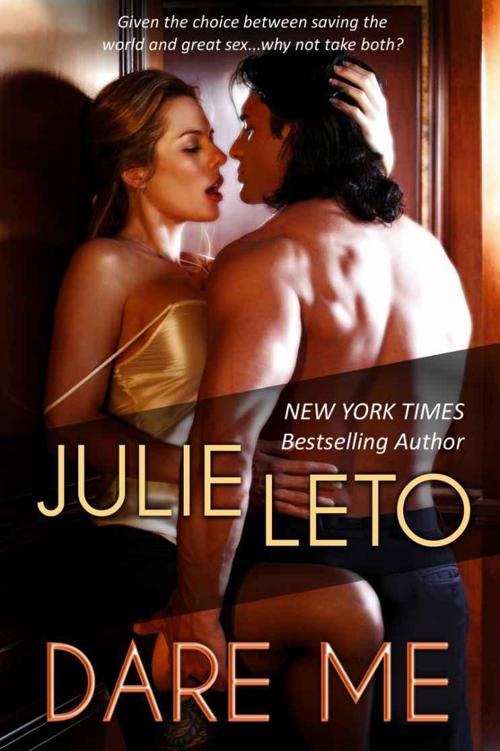 Praise for
Dare
Me…

"Dante is uber male, sexy, smart, full of
himself yet underneath it all he knows he screwed up and wants to get Macy
back. Sigh. This is a hot, fun quick read."

For all the readers who wished James Bond had
been a woman.

Macy Rush waited for the real estate agent to respond, but
wasn’t entirely surprised when her offer to purchase the Garden District home
for twice its asking price went unheeded.  From the minute she crossed the
threshold, she’d smelled a set-up—a fact verified by the next voice she heard.

“That’s going to be a problem, Macy, since I already own
this pleasure palace.”

Macy didn’t turn around.  Only one man could set her on edge
with one simple sentence.  But in fighting her instinct to spin and knock his
inevitably cocky grin off his face, her other senses zinged to high alert.  Her
skin rippled with gooseflesh, as if each individual pore was reaching out to
touch him.  His scent—a woodsy, spiced aroma tinged with the sweet smokiness of
tobacco—intensified the prickle up the nape of her neck.  The air crackled with
electricity, as if he was a living conduit.

“Dante Burke,” she said, announced, steeling herself as she
turned.  Seeing him again could knock her off guard—if she let it.  But she’d
die before she so much as a catch of her breath.  He’d done his damage.  She’d
recovered and she had no intention of suffering a relapse.  “Why am I not
surprised?”

The woman who had shown her the house beat a quick path to
the back door.  Macy noted the retreat and then locked gazes with Dante, the
man who had ripped her reputation, her career and her heart to shreds.

He was still gorgeous, damn him.  Slick, dark hair pulled back
into a queue.  Rich, tanned skin that glowed from the St. Tropez sun.  A lithe,
muscled body accentuated by a suit that probably cost as much as the asking
price of the house.  Still breathtaking and consequently, still lethal—and
still so full of himself, she wondered there was room for both and his ego in the
expansive entrance hall.

Wordlessly, he gestured to the front parlor.  When she
didn’t instantly comply, he entered without her.  He moved like James Bond,
with a dash of Fred Astaire.  She rolled her eyes.  Only Dante Burke could
manage to be insufferable when he’d done nothing more than walk into a room.

“Not surprised by my initiative?  You shouldn’t be.  Stands
to reason that the Arm would beat T-45 to the most important property in New
Orleans.  Especially with world peace at stake.  I bought the place two weeks
ago.”

“And yet the house is still listed on the market,” she said,
her hands inching into the pockets on her jacket.  Beneath the slick leather,
she caressed the cool steel of her backup firearm, a sleek 9mm Smith & Wesson
Ladysmith.  With her main weapon tucked in her shoulder holster and several
alternative weapons strapped to various parts of her body, she should have felt
entirely secure, even in Dante’s unsettling presence.  But she had a good idea
of why he’d beaten her here.  He was about to seriously screw up her case.

“Why didn’t you remove the listing?”

“Friendly neighbors delivering casseroles can be such a
nuisance.  As long as there is no owner, there is no reason for the locals to
nose about.”

He wandered toward the window.  He’d likely spotted her
fellow T-45 agents positioned across the street.  They’d been ordered to watch
her back.  Lot of help they’d do her now.  The enemy was within.

Clearly, he knew why she was here.  He’d likely come for the
exact same reason.

“How gentlemanly of you,” she lied, “letting me see
something you have no intention of letting me have.”

The slight European lilt in his voice fueled her ire and she
had to force her lungs to take in air evenly.  He hadn’t been overseas in
years.  Since birth, practically.  And yet he still possessed that distinctly
urbane air that had once attracted her all-American girl hormones.

Luckily for her, his past transgressions kept his allure in
perspective.  “Don’t get me started on the kind of guy you are, Dante.  You
won’t like my assessment.”

“I’ll just enjoy the sound of your voice.”

“Enjoy this then,” she snapped, starting toward the door.
“You’re a son of a bitch who can’t be trusted.  And now that I know you’re
here, I’ll return to Paris and throw one hell of a party.  With you in charge, the
world
will
come to an end soon.  And if it’s going out with a bang, then
so will I.”

With the lightning fast reflexes that had propelled him to
the top echelon of international intrigue, Dante grabbed her arm.  But Macy was
no slouch.  She spun, ducked and rolled, ending her move with Dante’s arm
pressed tightly against his back.  He’d likely let her get the upper hand, but
she wouldn’t refuse it.

“Don’t touch me,” she warned through clenched teeth.  Her
emotions raged, a lethal combination of anger, spite and fear.  He wouldn’t control
her again.  Not ever again.  If she allowed him even the slightest element of
domination, he’d find ways to rule her entirely.

He answered with a whisper that was both smooth and
hypnotic.  “I plan to touch you extensively and intimately over the next few
days, love.  And you’ll let me.  In fact, you’re going to beg me.”

She could break his arm.  He’d hardly tensed his muscles
against her counterattack.  Probably didn’t think she meant business.  Cracking
a bone would prove otherwise.

But exacting revenge on her ex wasn’t her mission.  She
couldn’t allow her emotions to interfere.  She needed the house.  Short of
brute force—and she was certain the three-story cottage was crawling with
agents from the Arm who would relish the chance to take her down—she had to go
a different route.

She released him, pushed him away roughly, though he barely
stumbled.  With utter coolness, he straightened the cuffs of his tailored
shirt.

“You’re full of yourself, Dante.”

“That’s part of what you loved about me.”

“Once.  I don’t make the same mistakes twice.”

He arched a dark brow, which only made his light gray eyes
more piercing, more mesmerizing.  “Don’t make such declarations so quickly.  I
haven’t offered you my deal yet.”

“I didn’t come here to deal,” she countered.

“No, you came here to buy this house so you could find the
hidden code that might—might—avert a nuclear attack on the United States from
unnamed terrorists who, at this moment, are threatening to hijack an abandoned
missile silo somewhere in the vast Russian wilderness and use the forgotten
warhead to start World War Three.”

So he did know her mission.  Top to bottom, with every
detail dispensed in his signature iced vodka voice.

“They don’t have the silo, yet,” she pointed out.  “Chances
are, the Russians will stop them before they get that far.”

Dante laughed and Macy admitted, silently, that her faith
was utterly ridiculous.  The Russians were no longer a cold-war powerhouse.
Since the break-up of the Soviet Union, the eastern bloc nations remained in horrible
disarray.  When T-45, an independent agency of Western operatives, received
intelligence that a terrorist group was trying to secure an abandoned silo,
they hadn’t been too worried.  The silos had all been disarmed.  Or so they’d
been told.

Then the organization had been contacted by a consortium of
Russian industrialists who confessed that while they’d pocketed the money paid
to them by the struggling Russian government to disarm the silos, they’d left
approximately one hundred live nukes in the most remote regions of the
country.  Too expensive and too hard to reach, they’d claimed by way of
excuse.  And now, too hard to effectively protect from an unnamed threat.

So the consortium hired T-45 to clean up the mess.  It had
been Macy’s team who had found evidence that a counter-code might exist—one
that would render any previously determined launch codes useless.

Unfortunately, the mathematical fail-safe was proving
difficult to find.  Several potential locations existed, so she’d dispatched a
team to each one.  But she’d kept the likeliest location for herself, not
knowing that her choice would lead her back into the scope and sights of Dante
Burke.

Things must be grimmer than she’d been led to believe if the
Arm was involved.  The covert branch of the CIA didn’t engage in operations on
American soil unless all other avenues had been explored.

“What do you know about the code?” she asked, dropping all
pretense.

“I know that I’ve had a crack team searching this house for
two weeks and…nothing.”

“No can do, Macy. We both know that if the terrorists take a
silo and break the launch code, they’ll point that intercontinental ballistic
missile at a U.S. target.  This is a national security issue.  T-45 needs to
butt out.”

Dante surveyed the room, his eyes assessing the vintage
furnishings with cool familiarity, never lingering on one thing—other than the
mirror—for more than a split second.  Typical.  And to think she’d once found
his arrogance exciting.

He mulled her admission for a moment, then grinned
cryptically. “Hired, I take it, by the same consortium that should have disarmed
the missiles twenty years ago?  We were wondering how they’d try to cover their
asses.”

“Makes no difference. I have the house, but no code. You
have nothing.”

Macy ran her hand through her hair, somewhat surprised to
catch Dante’s eyes soften as she did so. What was he up to?

“You’re wrong. I have me. I’m the best finder in the
business. You supervised my training, remember? How long did I take to excel
beyond the Arm’s rudimentary procedures?  Weeks?  Months?  If the code is here,
I’ll find it.”