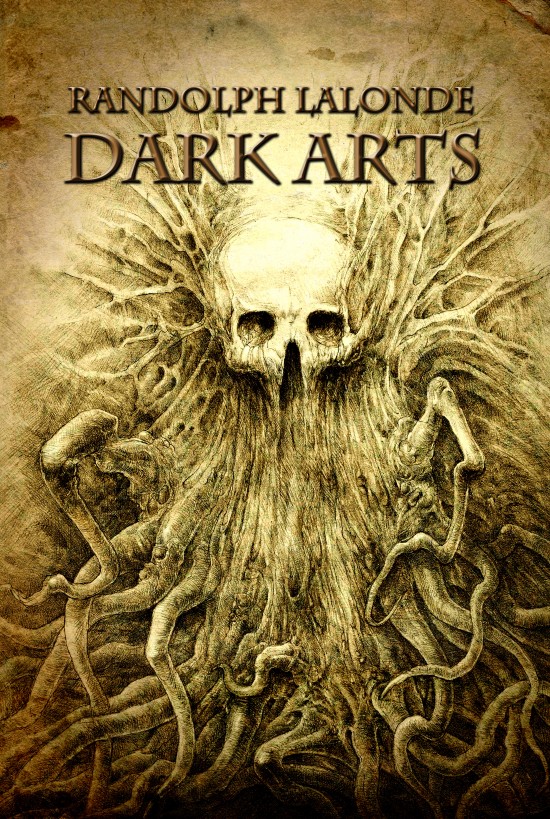 “
Got caught
digging for idols
when I should
be reaching for the sky.”

All rights reserved. No part of this
publication may be reproduced, distributed, or transmitted in any
form or by any means, or stored in a database or retrieval system,
without the prior written permission of the publisher, Randolph
Lalonde.

This is a work of fiction. Names,
characters, places and incidents either are the product of the
author’s imagination or are used fictitiously. Any resemblance to
actual persons, living or dead, events or locales is entirely
coincidental.

“You have come for the Libro de Puertas,”
said the monk ponderously. The drooping sleeve of his threadbare
robes hid all but the corner of the small leather bound book.

Maxwell stood in the doorway of St. Peter’s
Chapel. It was less than a tenth the size of the last St Peter’s
church Maxwell saw months ago. He pulled a nearly empty package of
Marlboros from his jacket pocket and popped one out into his
hand.

“No smoking in this house, son,” the monk
warned, standing slowly.

“No bother on me. American fags are shite
anyhow,” Maxwell griped.

“Not bothering to tame that Cockney, either.
Your father would be embarrassed.”

“Da died trying to be something he wasn’t.
Didn’t even get the book he spent most of his life looking for.
That one there, the one you murdered for.” Maxwell pressed the
smokes into his leather jacket pocket. “Like you, on the verge of
excommunication while Clergy and law alike go looking into a few
torture victims in Seattle.”

“I was in the vicinity, not the
perpetrator,” the monk replied.

“Heard the girl’s father caught up to you.
Is that what you’re hiding under that hood? A few new scars?” He
hoped to rattle the middle aged former monk, to get some kind of
feel for who he’d become since he started wandering across the
continent. The word was that he’d gone severe; following the ways
of the inquisitors.

Drawing demons to him as much as seeking
them out so he could pry secrets from the lips of their possessed
victims. Didn’t believe any of it was possible, Panos was just a
sick asshole the Catholics tossed aside who liked to torture
people. “I hear he tried to take your nose. Can’t believe he didn’t
just kill you.”

Panos the Monk didn’t show any sign of
irritation, he didn’t flinch. “Are you any better? Riding around
America with your band, collecting religious baubles to keep them
on the road?”

Maxwell looked around the chapel, taking
note of the fairly average stained glass windows, worn pews and
humble Christ carving at the front. The savior seemed to stare at
the altar, his expression locked between pity and a cringe. Whoever
carved it did the church a disservice, the work was good, but the
expression was all wrong. “It’s enough to keep me and my boys on
the road,” he said. He needed to buy enough time to figure out the
situation. Why had Panos spent so much time in Montreal with the
authorities after him, and was it coincidence that Maxwell spotted
him going into the church nearest to the bar they would be playing
in?

“Who is paying for this relic, Maxwell?”

“Angelo’s the broker,” Maxwell said quietly.
“Told me that you stole that, and it wouldn’t be good for you if
you were found with it. Don’t know how, but he knew you’d be here.
Said it was most likely I’d find your corpse.”

“Nearly,” the monk answered. He tugged one
side of his hood, making certain it hid his face. Max could see the
merest hint of bandages crisscrossing Panos’ face.

“Best hand it over. You may be standing in
His house, but I’ll guess He’s on my side.” Doubt weighed on
Maxwell with regards to the wishes of the Almighty. He believed in
his Zippo and tin of lighter fluid much more.

“I can’t give it to you,” Panos said. “Not
unless you have something to offer, something worth trading.
Something that will empower me even more.”

“You’ve seen the Eternity Ankh, where is
it?”

“When I was barely past my da’s knee,”
Maxwell scoffed. “He sold it for weight, it was pure gold. You
think you need something like that to keep you breathing?” He
couldn’t stand most of the people he met while he did his job.
Superstition and zealous ideals infected most of the collectors.
“Buying in to the folk tales in that book is not healthy.”

“This book you’re after is keeping me alive,
boy.”

“You think you know that much about the
world? At the ripe old age of what, twenty?”

“Life lived, world seen, and I’ve never seen
what you’re telling me,” Maxwell said. “If you’re really walking’
around at room temperature, maybe you could prove it. I’m sure
hanging boy over there won’t mind if you borrow one of his nails,
show me your blood doesn’t run.”

“I’ve got five hundred dollars here, it’s
yours if you come back to reality, and give me that book,” Maxwell
said. He watched the other man, who only spared him a glimpse at
the mention of so much cash. “That much green could keep you
liquored for a while. Miracle enough for a drunk, monk or no.”

“I haven’t had a drink since I found the
Libro de Puertas. It’s about the covenant. Angelo shouldn’t have
it. His customers don’t deserve it, and it shouldn’t go anywhere
near Sudbury.”

“Angelo isn’t the most trustworthy type, but
he’s a good collector. He knows what he’s buying,” Maxwell pulled
the wad of twenties from his back pocket and held it up so it
couldn’t be missed. “Pays honest, too.”

“He should have come himself,” Panos
said.

“Can’t get him out of his store these days.”
Maxwell couldn’t help it any longer, he had to ask. “What’s under
the hood, Panos? Give us a peek, mate.”

“The covenant is delicate. Someone like
Angelo’s customers can’t be allowed to know the details as they are
translated here, you understand?”

“Five hundred dollars,” Maxwell enunciated
loudly, wiggling the thick green wad between them. “Enough for you
to drink yourself to sleep for days. It’s a good time for you to
find a hiding place, this’ll get that done.”

“You don’t understand,” Panos said
earnestly. “I have been saved. This book comes with a purpose; it
needs to be protected until a new covenant is needed. It must be
carried by someone who knows.”

Maxwell pressed the cash into his inside
jacket pocket. It would make a hell of a bonus if he could get the
book without paying for it. His hand went to his right outer pocket
then, and wrapped around the tin of lighter fluid.

“You’re not getting the book,” Panos said,
starting for the side door.

In three long strides Maxwell closed the
distance between them and gripped Panos’ brown robes beneath the
back of his hood. In a glimpse he could see someone had torn out
tufts of his hair, leaving scabby patches of scalp. In Maxwell’s
other hand he held the lighter fluid tin high. It was pocket sized,
but there was enough to set the man’s clothes on fire.

“Let me go!” Panos shouted. He wheeled
around clawing.

Maxwell withdrew just quick enough to get
away with the slightest scratch on his cheek, spraying the monk in
the eyes with lighter fluid. He continued to spray even as the man
retreated, almost emptying the can.

Panos screamed, recoiled, and fell backwards
over a pew. The book fell out of his sleeve.

“Should have taken the cash,” Maxwell said
as he picked the book up and secured it inside his jacket. “Mad
geezer.”

His boots echoed as he crossed the chapel to
the front door. Maxwell hoped Panos would stay down, but listened
to the rustling behind him as the man struggled to his feet.
Cringing and whining sounds echoed behind him, the most noticeable
thing in the church until he heard the faintest click.

Maxwell had heard that sound before, and in
an instant he hurled himself between old pews. The small church
became an echo chamber for Panos’ furious .45 as two shots rang
out. “Give the book back!” Panos cried. “I’ll keep shooting! You
can’t hide!”

Without a second thought, Maxwell tossed the
book over the nearest pew in Panos’ direction.

“And the money!” cried the monk.

“Wanker,” Maxwell muttered. His ears were
ringing. He produced the wad of cash and held it up so Panos could
see it. “Do you want me to throw it?” he asked.

Panos didn’t answer. Instead he crossed the
distance to the book. Maxwell watched the man’s shaky hand pick it
up from where he lay on the floor. The monk quickly shuffled over
to Maxwell’s row and pointed the gun at him.

“No worries,” Maxwell reassured, holding the
money up as high as he could. “Just take this and we’ll go our
separate ways. Just like before, I’ll leave you no worse than I
found you.” He had an opportunity to look the monk in the face, and
saw that the bandages over Panos’ nose were soaked equally with
lighter fluid and blood. That’s why the Monk was in so much pain;
whatever terrible wound had been bound up probably felt like it was
on fire.

Panos snatched the cash and started to
run.

“Ey, mad Monk!” Maxwell called as he pulled
his Zippo from his jeans pocket, lit it, got to his knees and
tossed the little torch.

The monk began to turn back towards him,
aiming the gun.

The Zippo couldn’t have landed in a better
place if Maxwell had an eternity to try. In a split second Panos’
expression turned from rage to panic as the flaming lighter landed
in a fold of his fuel soaked hood.

Maxwell ducked as the gun went off. Panos
went up in a blue and yellow plume. One, two, three shots sounded.
Even though his ears rang like tinny bells, he could hear the
monk’s shrieks as he fell forward rolling, trying to put the flames
out.

Maxwell picked up the book and kicked the
smoldering man over. One more shot rang out as Panos rolled onto
his back. He wondered at his luck, an instant later when he
realized the shot missed. Maxwell kicked the gun out of the monk’s
hand and was tempted to keep kicking, but bent down and snatched
the wad of cash instead. Panos was more interested in wailing, his
hands over his face, than stopping him.

“I’ve been using that lighter fluid gag for
a couple years now, you’re the first I’ve actually set on fire,”
Maxwell said. “I have to admit, you didn’t go up as bad as I
thought you would, and you put it out quick. Might be time to find
a better way to scare the wits out of your sort.”

He was just over twenty miles away, riding
his Harley Davidson Sportster in the cool night air when he
realized his neck was soaking wet. He reached up and felt a bloody
trail leading to his ear. Maxwell winced in pain, nearly losing
control of his bike entirely as he touched an open wound where his
earlobe had been. “Shoulda dragged his arse out of that church and
made sure he burned,” he said through gritted teeth as he
accelerated down the street, the roar or his Harley Davidson
filling his ears.

Dark Horse by Rhea Wilde
Brutal Revenge by Raven, James
His Father's Eyes - eARC by David B. Coe
Suspending Reality by Chrissy Peebles
Her Every Pleasure by Gaelen Foley
Claiming Chase: (A Second Chance Stepbrother Romance) by Eve, Charlotte
The Magic Circle by Katherine Neville
Katie Up and Down the Hall: The True Story of How One Dog Turned Five Neighbors Into a Family by Glenn Plaskin
Summer of Pearls by Mike Blakely
Firefly Summer by Maeve Binchy