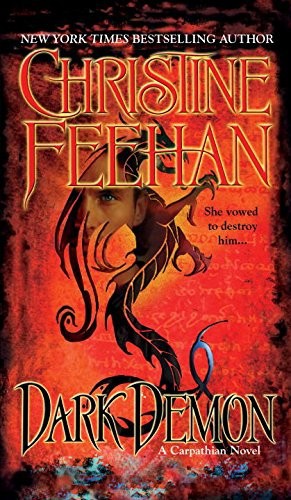 (a division of Penguin Books Ltd.)

A Jove Book / published by arrangement with the author.

Jove Books are published by

JOVE is a registered trademark of Penguin Group (USA) Inc.

The "J" design is a trademark belonging to Penguin Group (USA) Inc.

Printed In The United States Of America

To Dr. Christopher Tong and Mary Waltrich with much love

And for Kelley Granzow and her lifemate Rick

Be sure to go to:

to sign up for her PRIVATE book announcement list and get a FREE EXCLUSIVE Christine Feehan animated screen saver. Please feel free to e-mail her at christine christinefeehan.com.

She would love to hear from you.

Special thanks to Dr. Christopher Tong who is a continual source of information. It was his brainchild to use the Carpathian language as the proto-language of the Hungarian and Finnish languages. Dr. Chris Tong (www.christong.com) is fluent in several languages, did undergraduate studies in linguistics at Columbia University and graduate studies in computational linguistics at Stanford University. He has also studied the world's great spiritual, mythic and healing traditions for the past thirty years (and personally participated in several of them). He is also the founder of The Practical Spirituality Press, and the author of several books on "practical spirituality." Thank you, Mary for speaking Hungarian and giving us a place to start!

Natalya Shonski drew the pair of black leather trousers up over her legs and settled them on her hips where they molded to her body. Leather helped prevent injury during battles and she was certain she would be running into trouble tonight. As she pulled on the soft leather camisole, she glanced around the meticulously clean room she'd rented. The inn was small, but colorful with tapestries on the walls and bright patterned covers decorating the bed. Her weapons were laid out with great care over the beautifully woven quilt.

She began to slip various weapons into the specially made compartments and loops in her leather pants. Throwing stars with razor-sharp edges. Several knives. A belt that provided her with room for more weapons and extra clips for the twin guns she fit snugly into the harness under each arm. She put on one of her new peasant blouses and donned the brightly colored fur vest the local women wore for warmth, effectively hiding her arsenal.

The long skirt not only hid the leather pants, but also helped her to blend into the local population. She'd chosen a colorful one, rather than the severe black kind the older women often wore, and tied a scarf over her tawny hair to further disguise herself.

Satisfied she looked as much like a local as possible, she shoved two Amis sticks into the well-worn loops on her backpack and opened the doors to the balcony. She had deliberately chosen a room on the second floor. Her many enemies would find it difficult to approach unnoticed while she could escape easily to the ground below or go up and over the roof.

Natalya rested her hands on the balcony rail and leaned out to survey the countryside. The small village was nestled at the bottom of one of the tall jagged peaks that formed the formidable Carpathian Mountains. Numerous small farms were scattered across the green, rolling hills. Stacks of hay dotted the meadows and led the way up the mountain to the timberline. Above the heavy forest were rocky peaks, still glistening with snow. She felt as if she'd stepped back in time with the simple homes and the rustic way of life, yet she felt as if she'd come home. And that was truly odd. She had no home.

Natalya sighed and closed her eyes briefly. More than anything in the world, she envied these people their families. Their laughter and children and the love shining in their eyes and on their faces. She longed to belong somewhere. Be needed by someone. To be treasured by one single person. Just to be able to truly be who she was, share a real conversation…

Her fingers found deep grooves in the railing and she found herself rubbing the polished wood, the pads of her fingers stroking along the grooves almost in a caress. Startled, she examined the scores in the hardwood. It looked as if a large bird had dug talons deep into the railing, although the marks were old and the innkeepers kept the intricately carved balcony polished and free of splinters.

She inhaled the night air and stared up toward the top of the mountain. Somewhere up there was her goal. She had no idea what drove her to come to this particular spot, but she trusted her instincts. She needed to climb to the top and find whatever it was that wouldn't let go of her. Thick mist hid the mountaintop, enveloping the peak in an impenetrable cloud. Whether the cloud was natural condensation or a preternatural warning made no difference. She had no choice but to climb the mountain, the compulsion driving her was far too strong to ignore.

Natalya took a last look toward the swirling white mists and headed back into her room. There was no point in putting it off. She'd spent the last week mingling with the people in the village, establishing friendships with a few of the women and getting a feel for the area. She found she needed human companionship although her life was very solitary. She enjoyed the time spent with the local women and had gleaned quite a bit of information from them, but she was always saddened that her friendships could never go beyond the surface. It made for a lonely life and she yearned to belong somewhere, to let someone like the innkeeper, Slavica Ostojic, know who and what she was just so Natalya could have the luxury of being honest with someone she truly liked.

The hallway and stairs were narrow, leading to the sitting room below. The room opened into the dining hall on one end and a bar on the other. Many of the locals drank beer in the evening and visited together after a hard day's work. She waved to two or three people she recognized, her gaze automatically scanning the rooms, noting exits, windows and above all, new faces. Several men sitting at the bar glanced at her. She catalogued the lined faces, the friendly smiles and assessing glances, filed them away just in case she met up with them again.