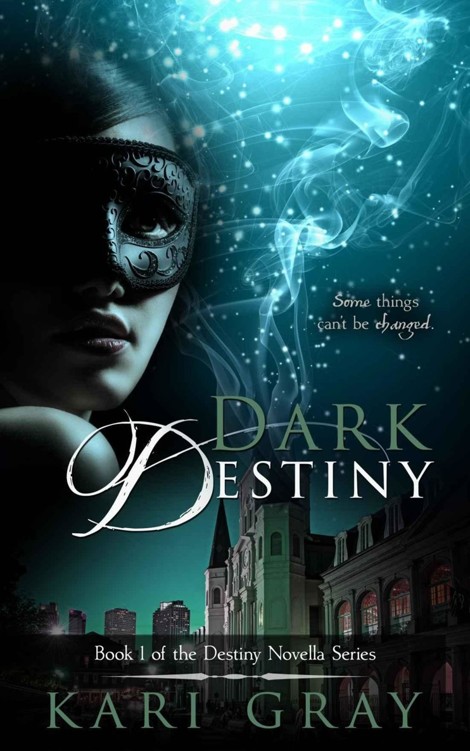 All Lily Bordeaux wants is a shop of her own in the French Quarter, but the family legacy, passed down from her Salem witch ancestors, is bearing down on her despite her efforts to avoid it. A series of events place her in danger, but an old friend from college, Bennett Duschesne, may be the one person who can convince her to confront her past demons and embrace her gifts. As she grows closer to Bennett, evil forces threaten to destroy everything she loves. Will she have accepted her family legacy, only to find she was too late? Dark Destiny is the first of three novellas, PG rating: mild language and innuendo.
Contents

For my mother. I love you always.

Lily Bordeaux faded in and out of consciousness as she lay on the street outside Bohemian Boutique, her aunt’s quaint shop in New Orleans’ French Quarter. Sirens wailed and even behind closed eyelids she saw the intense flashing lights of rescue vehicles. The heat from the burning shop washed over her in waves and she told herself to get up, to move, but her body stubbornly refused to obey.

Something urgent tried to claw its way to her consciousness through the haze and the paralyzing pain, but she couldn’t quite grasp it. She’d been with someone. Something…someone… It skirted the edges of her scattered thoughts, frustratingly elusive. There was only one absolute certainty: everything hurt.

She floated then, hovering and feeling a brief break from the blinding pain.

Not yet, sweet girl, you can’t come here yet…

Her mother? Her parents had been dead for twelve years, how could she be hearing her mother? A flood of sensations swept through her, overwhelming and nearly as painful as her physical wounds. Auras burst around her, and she was consumed by a deluge of human emotion, both living and dead.

You have to learn how to use it, Lily, how to control it. You can’t keep pretending you don’t have it.

Seriously? Her mother came for a visit after being gone for over a decade and all she wanted to talk about was Lily’s paranormal gifts? They were the family legacy Lily had vowed to ignore forever. Just because she was a descendant of a Salem witch didn’t mean she had to act like one. Exploding auras, reading people’s emotions, cluing into their deepest dreams and secrets—she hated all of it and had since it the day it had taken her parents.

She heard her name from a distance, his voice sounding very far away, strange yet familiar, but disembodied. Disconnected. She felt a pulling motion, as though a giant hand dragged her through a tunnel and dumped her down onto the street.

“Lily!” The man was by her side now, a hand at her cheek, two fingers pressed against her throat. Amidst the overwhelming smells—the scorched ruin of the beloved shop going up in flames, the acrid smoke that wafted over and through her, she recognized someone she’d not seen for a long time.

She would know him anywhere, even with her eyes closed. It had been how many months since she’d seen him last? Three? Six? Too long. She and Bennett had been the best of friends from her first day as a freshman in a college far from home. He’d been two years ahead of her in school, was ever so much wiser and experienced, and she had adored him.

“Come on, baby doll, open your eyes for me.” Baby doll. He’d always called her that and it had always made her melt a little inside. The term of endearment spoken in that honey smooth New Orleans accent, his voice vibrating clear into her heart; she’d never heard him call anyone else by that name and she loved it. He didn’t sound so far away now, and his body helped block some of the heat from the blaze behind him.

Clarity slammed into her with all the force of a train as she realized where she was, what must have happened. The “someone” she worried about was Veronique.

“My aunt,” she groaned, turning her head toward Bennett and trying to open her eyes. “Where is Ronnie?”

“Was she with you?” Bennett lowered his face close to hers and shielded her eyes from the bright light with his hand. He wore his paramedic uniform well, had opted to go that route after finishing his degree in Criminal Justice. He was handsome as sin, his amber eyes steady, the lines in his face tense, drawn.

“Yes.” Lily tried to nod and stopped as a dozen knives sliced their way through her skull.

“Don’t move,” Bennett said and placed his hands alongside her head.

She closed her eyes again and felt Bennett straighten, heard him yell to the other paramedics, calling for them to hurry. She almost smiled. He was every inch the southern gentleman his mama had raised him to be, but he had a bark people tended to obey.

“I see Ronnie,” he said, leaning close to her and she felt a measure of relief again from the searing heat.

Lily felt tears gather behind her eyelids. She and her aunt had just returned with their morning tea and beignets, ready to open the shop for the day. Beyond that, everything was a blur. “Is she alive,” she whispered, and felt Bennett’s lips lay a gentle kiss on her forehead.

Lily coughed; it shot pain through her sides and had her gasping for air.

“You would tell me she’s fine,” Lily said and cracked her eyelids open again to look at him. Everything was so bright. The spring morning sky, although overcast, was still light enough to make her eyes water. “Even if you knew she wasn’t, you’d lie to keep me from worrying.”

“Hey now, I never lie,” he said, again shading her burning eyes. He moved fully into her line of sight, his heart-breaker smile in place even as the worry lines still etched his forehead and around his mouth. He lifted her right wrist, placing two fingertips against the inside and she gasped at the pain.

“It hurts, Bennett, everything hurts,” she said, the tears gathering and flowing freely now, running into her ears.

“I know, baby doll.” He lifted his head. “I need that gurney now!” Bennett turned his attention back to her. “Keep your head still for me, ok? I’m going to put a mask over your mouth, it’s just oxygen.”

She clutched at his arm, ignoring the pain that shot through her wrist. “Is someone with Ronnie?”

He nodded and looked up again, taking a medical bag from someone and pawing through it with one hand while his other lay on her forehead. “Just got to her right now.”

He looked into her eyes as he placed an oxygen mask over her mouth and nose. “I won’t. I’ll be with you the whole time.” Two other men joined him, and he began firing orders. “…losing a lot of blood…need a C-collar, not sure about her spine…”

The blur of activity that followed made her sick to her stomach and she wondered if she was going to throw up in the mask and then choke on it. She caught one fleeting glance from the corner of her eye, of the charming shop she’d spent hours in as a kid and had been her home for the last four years. The loss was almost too wrenching to comprehend.

One moment she was on the ground, the next her neck was immobilized, she was lifted onto a gurney and wheeled into an ambulance. Her thoughts were jumbled, irrationally mundane as the siren sounded and the ambulance moved through the city streets.
I just bought this outfit and now it’s ruined…I have new product to tag inside the store…My laptop, all of my bookkeeping notes are in the apartment…

The apartment above the shop that was now engulfed in flames.

Everything was gone. And worst of all, Ronnie might be, too.

“Stay with me,” Bennett said, leaning close to her, his hand on her forehead again.

She looked at him, wanting to say a million things, things that didn’t make sense even in her own head. Her whole life had been in that apartment. She’d just had her college business degree framed and had hung it on the wall next to a piece of Ronnie’s artwork. It was the two of them—the yin and the yang, Veronique Dubois’ artistic flair paired with Lily’s practical approach to life. It was everything and now it was gone.

Lily rested on a cloud. Blessed numbness had settled over her limbs, and as she slowly became aware of her surroundings, she struggled to discern her location.

Lily lifted her eyelids and wondered why they felt so heavy. She felt fuzzy.

“Hey,” she croaked in return and looked at Bennett, who sat by her bedside, holding her bandaged hand. He released it and she looked at him, squinted, really, and tried to figure out why he looked so serious as he handed her a cup of water. Bennett was always calm, funny, and had an underlying sense of confidence that had made a lot of their college friends jealous. But “serious” wasn’t a word she would have applied to him.

Lily took the cup awkwardly and shifted it to her left hand. She sipped the water and finally took a good look at her surroundings. Her memories of the explosion came back in a blinding flash and she wished they wouldn’t have. The cloud of numbness had been really comfortable.

“Where’s my aunt?” she asked, willing herself not to cry.

“She’s upstairs in ICU,” Bennett said and took the water from her. He picked up her hand again and held it between both of his. “She’s in an induced coma, Lil. But she’s alive, ok? And she’s tough.”

Lily stared at him, equal measures of relief and concern flooding through her. “Ok,” she said with a nod and swallowed hard. “I can work with that. Alive is good.”

“Yeah.” He smiled at her and she remembered so many good times with him and their group of friends in college. Hanging out at his parents’ mansion of a home in the city, or in the apartment above the Bohemian Boutique when Ronnie had gone on the occasional date or out with friends. Laughing, always laughing.

She suddenly felt self-conscious and glanced down. “How’s Steph?” she asked.

Lily looked at him and he shrugged. “We broke up almost a year ago.”

Recent years had seen the group of friends separate as real life had begun to intrude. Lily had been fully immersed in her business major and Bennett had finished his degree in Criminal Justice and his training as a paramedic. It wasn’t too strange she hadn’t heard that he and Steph had broken up, but she still was surprised she hadn’t known.

“I wish I could say I’m sorry, but I never did think she was a good match for you.” Lily smiled, reverted to the playful flirtation that had always defined her friendship with Bennett Duschesne.

He didn’t really smile in return, and she wondered if she’d hurt his feelings or overstepped her bounds. It had been a long time, maybe she assumed a certain degree of familiarity that wasn’t there anymore. She wasn’t thinking clearly at all—her head was a mass of cobwebs and what she could have sworn were floating elephants.