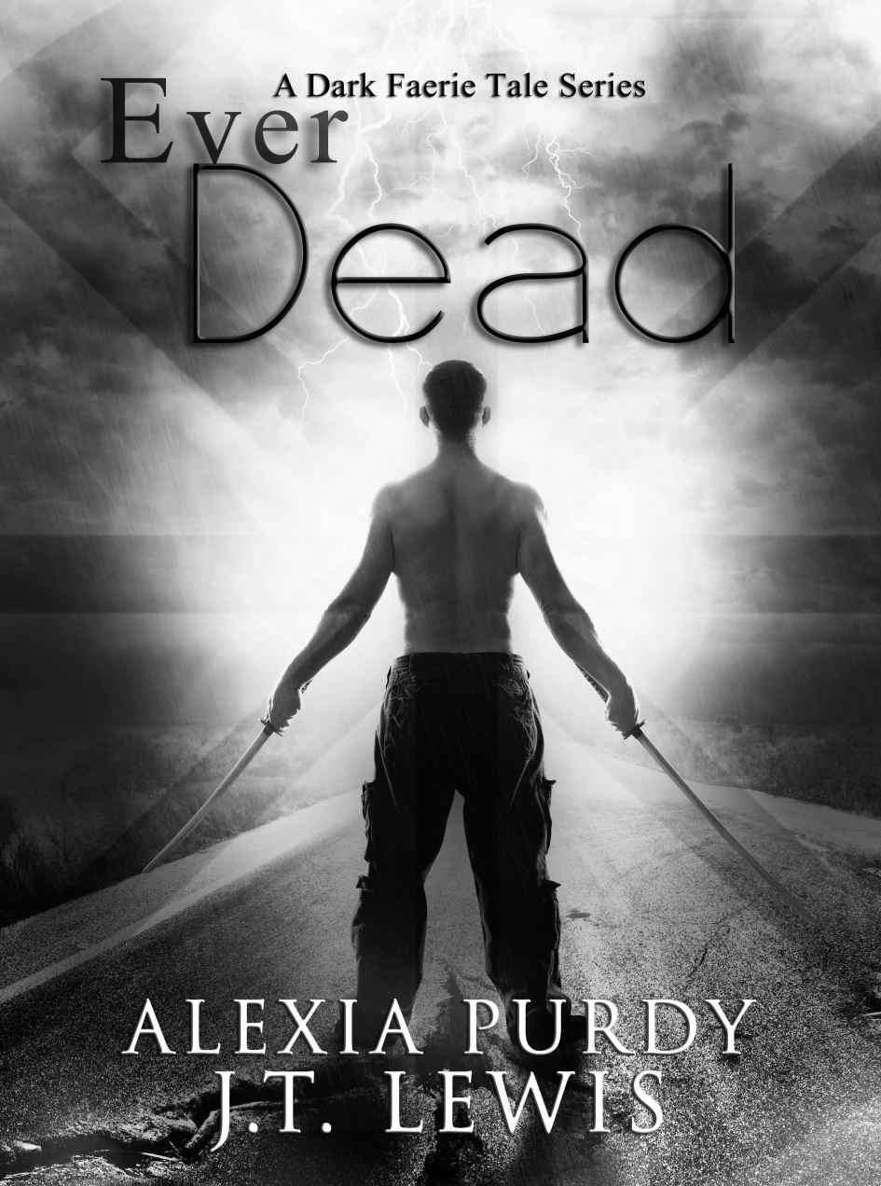 This book is sold subject to the condition that it shall not, by way of trade or otherwise, be lent, re-sold, duplicated, hired out, or otherwise circulated without the publisher’s prior written consent in any form of binding or cover other than that in which it is published and without similar condition including this condition being imposed on the subsequent purchaser.

This is a work of fiction. All characters and events portrayed in this novel are fictitious and are products of the author’s imagination and any resemblance to actual events, or locales or persons, living or dead, are entirely coincidental.

First off, I have to say that I have always loved Alexia Purdy’s amazing stories!

We’ve been friends for many years now, and when she offered me a chance to Beta-read History of Fire, part of her Dark Faerie Tale series, I jumped at the chance.

The concept was unique…because of the Unseelie’s trying to take over the world in the previous book Ever Wrath; there were now a whole slew of Unseelie in the human world.

Benton and friends take on the assignment of trying to remove them, but many times this resulted in the destruction of said beast on the human side of the barrier.

Part of my amazement of Alexia’s work has always been the way she creates new fantasy worlds for her stories…an amazement born in part by my background in mysteries and thrillers…genres that do not require recreating the earthly realm.

It was also this background however that got me to thinking…

“Hmmm….with all of those deaths…there would have to be at
least
one detective pulling his hair out at this point…trying to figure out who was murdering these people…and even who these people were!”

Giddy now with the prospect of a story line that we could collaborate on, I proffered the idea to Alexia.

Of course, I had to wait several months for the idea to filter down through her publisher, agent and attorney…just kidding! She loved the idea!

Thus was born Hank Snowden and his amazing dog Luci! Along the way of solving the who, and the why of the crimes, Hank inadvertently discovers something about himself that has long been hidden deep in his being…something
magical!

I had a great time writing this and delving into the art of creating another world…so much so that I will be taking Hank Snowdon forward into his own series…tentatively titled…
Hank Snowdon, Wizard!

So in essence, this story is a companion book to
two
series…Alexia’s Dark Faerie Tales series as well as Hank’s new one.

I can’t thank Alexia enough for working with me on what I consider a pretty awesome storyline. We both hope you will enjoy it!

The sirens blared behind him, never taking notice of the lonely figure creeping down the way.

Benton pushed forward, limping. The blowing rain swept his scraggly, dark brown hair into his eyes, causing him to squeeze them shut. Shoving the strands back, he spotted a doorway down the alley he’d just turned into.

He had to wrap the jagged cut across his bicep. It was a deep one, soaking his shirt from the inside out despite the furious downpour. He checked the knob of the door, finding it unlocked before giving it a good, hard shove. The metal screamed into the night, but the wailing of sirens drowned it out.

Leaning against the cold steel door, he found the lock and bolted it shut. The building was a wrecked mess of abandonment, like many he’d holed up in before. The rain outside pattered against the rusted metal roof before drizzling down the support beams into puddles across the floor of what looked like an old factory. Dusty machinery, gears, rods and other gadgets lay rusting in the puddles formed on the floor.

Making his way toward the second floor area overlooking the factory, Benton hoped to find a dry spot to spend the night.

Running into a stack of rods, he cursed under his breath as they rattled across his path causing such an earful of ruckus, he was sure he’d be discovered. Luckily, the weather kept everyone inside their homes for the most part, and a place like this didn’t invest in constant twenty-four hour surveillance.

Upstairs in the barren office, the floor was covered in reams of old computer paper that were torn and shredded by whatever inhabited these walls now. Benton found an old sofa made of cheap pleather ripped at the edges and well worn. He wiped at the dusty layer that had settled on its surface before sitting down to examine his arm.

Peeling off his coat and hoodie was an excruciating experience. The blood was already drying to the layers of skin and cloth, ripping at the edges when he got his arm through.

“Shit!” he cursed, feeling the pain shock his system. It was enough for him to have to pause and let it drain away before he continued. Inhaling a deep, head straightening breath, he managed to pull out a bottle of water from his pack strapped to his hip. Pouring it onto the wound, he grimaced at the sudden burn.

He bit down on his lip and continued to dig through his pack for something useful.

He found the herbs he’d collected earlier. He’d learned much about them reading grimoires and studying with other witches and warlocks at the Scren Palace in the Land of Faerie. It was going to come in handy.

About friggin’ time,
he thought.

Finding the right leather baggie filled with a mixture of crushed herbs and essential oils, he dug a handful out and pressed the patch over the long cut that was still oozing blood with every movement he made. Inhaling sharply, as he pressed down on the wound, the blood mixing with the concoction that some southern witch had drilled into his head. She’d shown him how easy they were to find…they were very common plants that grew almost anywhere.

What was that obnoxious witch’s name?

Her name evaded him for he hadn’t favored her style of teaching. In fact he’d found her downright annoying and dry. Still, he was relieved that he’d paid enough attention to heal himself out here by himself. Without anyone else to watch his back, he had to know more than just sword fighting to survive.

As the pain slid away, he knew it would be time to remove the patch and cauterize the wound himself. The thought made him cringe and he cursed the Unseelie faery who’d caused him the wound in the first place. The array of scars he was collecting wasn’t overtly crazy, but it could get pretty bad if every fight he got into sliced him up such as this one. Without thinking, he pulled the mash from the bloody cut, immediately sending a coursing vein of fire into his flesh.

Benton bent over as the pain amplified…it was beyond anything he’d felt before. Searing for a long, unsavory moment, it finally faded away into a dull, calmly throbbing ache. The herbal mash kept infection at bay and helped the wound heal, but he still had to seal it with a quick burn. Manipulating fire was his specialty as a Fire Elemental, but that didn’t mean it wouldn’t be an almost unbearable procedure.

The night rained on and he finally settled on the old sofa, covering it with old computer paper beforehand. A dusty old blanket he’d found hidden in one of the old standing storage cabinets covered his body for added warmth. Finding the pillow he’d stashed into his pack, which could conveniently shrink everything he wanted to stuff into it, he silently reminded himself to stash a sleeping bag and blanket into it at a store tomorrow.

He’d lost his last one when he’d been attacked by a gathering of Unseelie who’d jumped him by surprise back in Houston. He’d taken mighty fine care of that little faction with a swift, one-sided fire fight. They got to his sleeping bag and blanket, but he’d gotten their hides incinerated.

Not a bad tradeoff.

As the rain pattered across the metallic roof, he listened to the noises of other critters also making their shelter in the old warehouse. The sirens were silent, but he bet they had settled where he’d just left a nice, ashy mess for them to clean up.

The cops were another problem he hadn’t foreseen, and keeping them on the outskirts of his mission was becoming a complication. They wouldn’t believe him if he told them what he was doing here in the human realm: killing off Unseelie escapees who’d hidden amongst the humans to continue their conspiring ways. The cops would have him tossed behind bars faster than he could summon his fire sword, even if it had to do with the safety of the human world. He had to stay off their radar somehow, but that was proving harder than he’d initially thought.