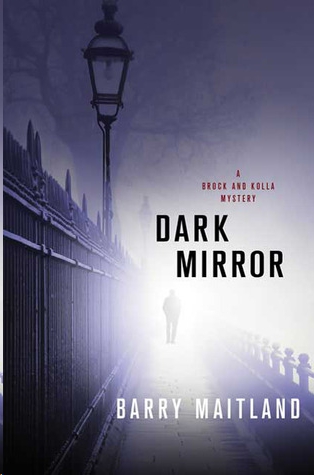 ‘There is no doubt about it, if you are a serious lover of crime fiction, ensure Maitland’s Brock and Kolla series takes pride of place in your collection.’—
Weekend Australian

‘Barry Maitland is one of Australia’s finest crime writers.’—
The Sunday Tasmanian

‘Maitland is a consummate plotter, steadily complicating an already complex narrative while artfully managing the relationships of his characters.’—
The Age

‘A leading practitioner of the detective writers’ craft.’—
Canberra Times

‘Maitland does a masterly job keeping so many balls in the air while sustaining an atmosphere of genuine intrigue, suspense and, ultimately, dread. He is right up there with Ruth Rendell.’—
Australian Book Review

‘Maitland gets better and better, and Brock and Kolla are an impressive team who deserve to become household names.’—
Publishing News

‘Maitland stacks his characters in interesting piles, and lets his mystery burn busily and bright.’—
Courier-Mail

The characters in this book are fictitious. Any similarity to real persons, living or dead, is coincidental and not intended by the author.

All rights reserved. No part of this book may be reproduced or transmitted in any form or by any means, electronic or mechanical, including photocopying, recording or by any information storage and retrieval system, without prior permission in writing from the publisher. The Australian
Copyright Act
1968 (the Act) allows a maximum of one chapter or 10 per cent of this book, whichever is the greater, to be photocopied by any educational institution for its educational purposes provided that the educational institution (or body that administers it) has given a remuneration notice to Copyright Agency Limited (CAL) under the Act.

Cataloguing-in-publication details are available
from the National Library of Australia
www.librariesaustralia.nla.gov.au

Set in 12/16 pt Bembo by Midland Typesetters, Australia
Printed and bound in Australia by Griffin Press

With special thanks to Barry Sherringham and Dr Tim Lyons, and to Alison Sproston and the London Library for their help
.

N
igel Ogilvie hurried up the stairs to the Reading Room on the first floor, and made his way, panting slightly, to the big windows overlooking the square. It was a dazzling spring morning, the sun glistening on new foliage bursting from the trees in the central garden, so that it seemed as if King William on his bronze horse was prancing through a brilliant green cloud. Nigel spotted the familiar figure sitting on a bench not far from the statue, her head bent over a book, and watched as she wiped her mouth with a paper napkin, then slowly gathered up the wrapper and drink bottle by her side. He reached into his pocket for his mobile phone and took a picture, capturing the moment as Marion got to her feet and the sun caught her, setting her red hair alight. She began to walk towards the library, tossing her rubbish into a bin. Her coat was unbuttoned, and he watched the swell of her thighs beneath her dress as she strode, head up.
Lithe
, he thought, that was
the word. He felt a small quickening of his heartbeat and turned away, making his way across the Reading Room to where he’d left his book earlier. Settling himself in the red leather armchair, he opened the heavy volume on his knee and waited, eyes unfocused on the text.

He was finding it hard to concentrate these days, his research not going well. The idea for the project,
Deadly Gardens
, had been dreamed up by his boss over a boozy lunch, and Nigel was convinced that it wasn’t going to work. For the past week he’d been trying to make something of the gardens that Lucrezia Borgia would have known at Ferrara, Nepi, Spoleto and Foligno, but really, it was a waste of time—Lucrezia had had more pressing things on her mind than gardening. She too had red hair, if Veneziano’s portrait was to be believed, and Nigel imagined that she and Marion might have other things in common—a dangerous attraction, for one.

Deadly Gardens
. He sighed with frustration. He detested Stephen, his boss, a philistine about half his age, who treated him with an amused contempt that made him feel as if he was back at school. But at least the project had provided him with an excuse to hide himself here in the library. He loved the place, a refuge where he could turn off his importuning mobile phone, bury himself in the womb of a million books, snuffle about on the steel grille floors among the stacks, do
The Times
crossword and—a particular satisfaction—observe the other patrons. Poking about in the memoirs of the dead was fascinating, of course, but there was a particular buzz, a special frisson, about the leisurely observation of lives in which passions were still unresolved, and suffering still to be endured.

And here she came at last, Marion Summers, making her entrance up the main stair and looking more Pre-Raphaelite than ever, with her long flowing skirt and that mane of thick red hair and complexion so pale—deathly pale this morning—that he
could make out the faint blue line of the artery ticking in her throat. She too had her particular place in the Reading Room, at one of the tables, her pile of books next to the small vase of flowers she’d brought in the previous day. He wondered where they’d come from. They were white, and more like wild flowers than the sort of thing you’d find in a florist’s, rather improbable in Central London. What had she been up to last weekend? Was there an admirer out there he didn’t know about?

He watched her as she approached, trying to hide his eagerness, and wondered if she would glance at him and offer one of her knowing little smiles. They were at least at that stage, although in his imagination they were a good deal further. Stephen would be irate to learn that he had certainly spent more time studying her than the Borgias’ gardens. He knew her borrowing record, her home address, her working timetable, her tastes in soft drinks and sandwiches. He could recall exactly the intonations of her voice when she was puzzled, amused, cajoling the librarians who helped her track down the things she needed. And he had many photographs of her, working here in the library, sitting outside in St James’s Square beneath William III on his prancing horse, and on the bus. And all this he had acquired in secret, without arousing the least suspicion.

Marion paused beside her table, splaying her fingers on its surface for support. There was a faint sheen of perspiration on her forehead, which was creased by a frown, as if she were trying to make sense of something. She grimaced suddenly, raising a hand abruptly to her mouth and reaching with the other for her chair. But before she could grasp it she staggered, and her hand knocked the vase of flowers to the floor. She doubled over with a moan and sank to her knees.

‘Oh!’ Her cry was cut off as she was abruptly sick, her body convulsing violently, sending the chair tumbling onto its back.

Consternation spread out in ripples across the Reading Room, people rising to their feet, craning to see what had happened. But Nigel remained where he was, eyes bright, phone in hand, fastidiously recording every detail. She was being sick again, poor thing, writhing in agony as she vomited over the red carpet.

One of the librarians was running forward. ‘What is it?’ she demanded. ‘What’s wrong?’

A man who had been seated at her table said, ‘She . . . she’s having some sort of attack,’ shrinking back with a look of horrified pity on his face. Last to respond, the two old codgers in the armchairs in front of the fireplace had belatedly risen to their feet. Everyone’s attention was focused on the epicentre of the drama, unaware of Nigel taking surreptitious pictures of Marion thrashing about helplessly on the floor, and of the shock on people’s faces as they witnessed this awful scene, all of them struck by the same terrible realisation that such a thing, whatever it was, could happen to anyone, at any time, even
here
in this sanctuary.

‘Is there a doctor here?’ the librarian cried.

Actually there were six in the room, but none of them of the medical kind, and they were quite unable to help.

‘Are you calling an ambulance?’ she demanded, and Nigel froze, realising suddenly that she was staring straight at him.

‘Yes, absolutely!’ He dialled triple nine, feeling himself the focus of attention now as people gratefully averted their eyes from Marion. He spoke fast and clearly to the operator, feeling he was doing it rather well, and when they wanted to know his name he gave it with a little thrill of excitement—he would be on the official record.

‘Airways,’ the librarian said. ‘We have to make sure she doesn’t choke.’ But that was easier said than done, for Marion’s body was racked by convulsive spasms. It was some minutes before they subsided enough for the librarian to bravely stick her fingers into
the young woman’s mouth to make sure she hadn’t swallowed her tongue. Kneeling in the mess, she cradled Marion’s head on her lap and stroked her hair soothingly, the wild flowers scattered on the carpet all around. Nigel got some good shots of that.

Someone was gathering up the contents of Marion’s bag, which had spilled over the floor. Nigel stooped to help. He picked up a hairbrush, with strands of her red hair coiled around its bristles, and reluctantly put it back into the bag. But he palmed the computer memory stick lying beside it, slipping it into his pocket.

K
athy rose to her feet as the Crown solicitor came through the courtroom door and nodded at her.

‘Looks like you won’t be needed after all,’ he said. ‘We’re pretty much wrapped up.’